After the fluff come the numbers ;)

As you maybe know, the allegiance abilities for the DOK are :

This one is cumulative each round ! 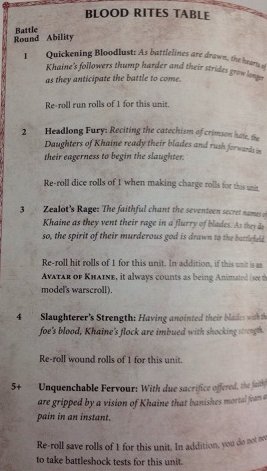 ps : There is at least 2 ways to gain 1 round (that stack) so you could start on turn 3 with the right selection of battalion/trait. So if you slow play the first turn (if possible) you start the fight on turn 4 blood rite !

A few warscrolls that look cool ! 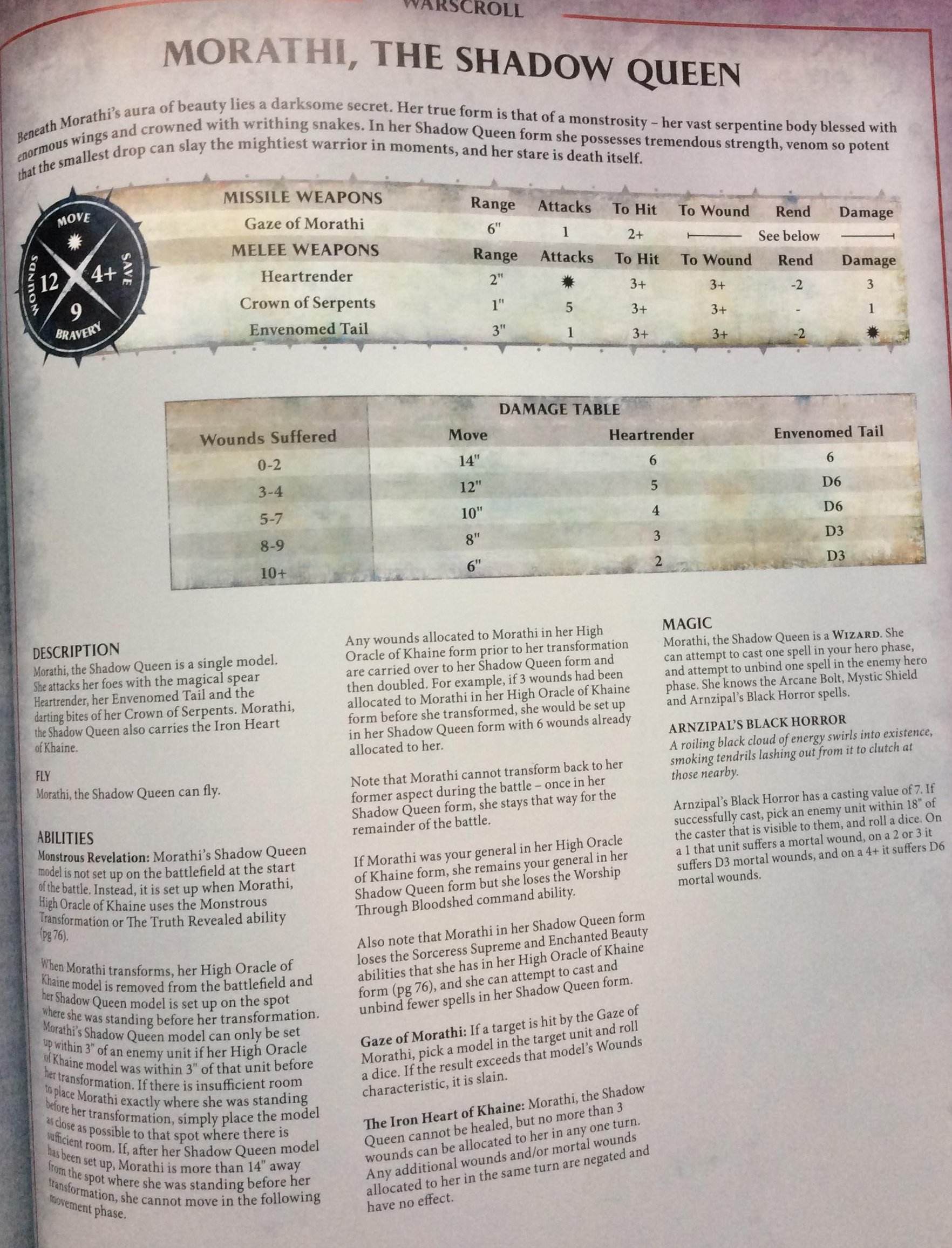 Her wounds carry over and are doubled and you can't heal her...hmm
Her command in human form is crazy good ! 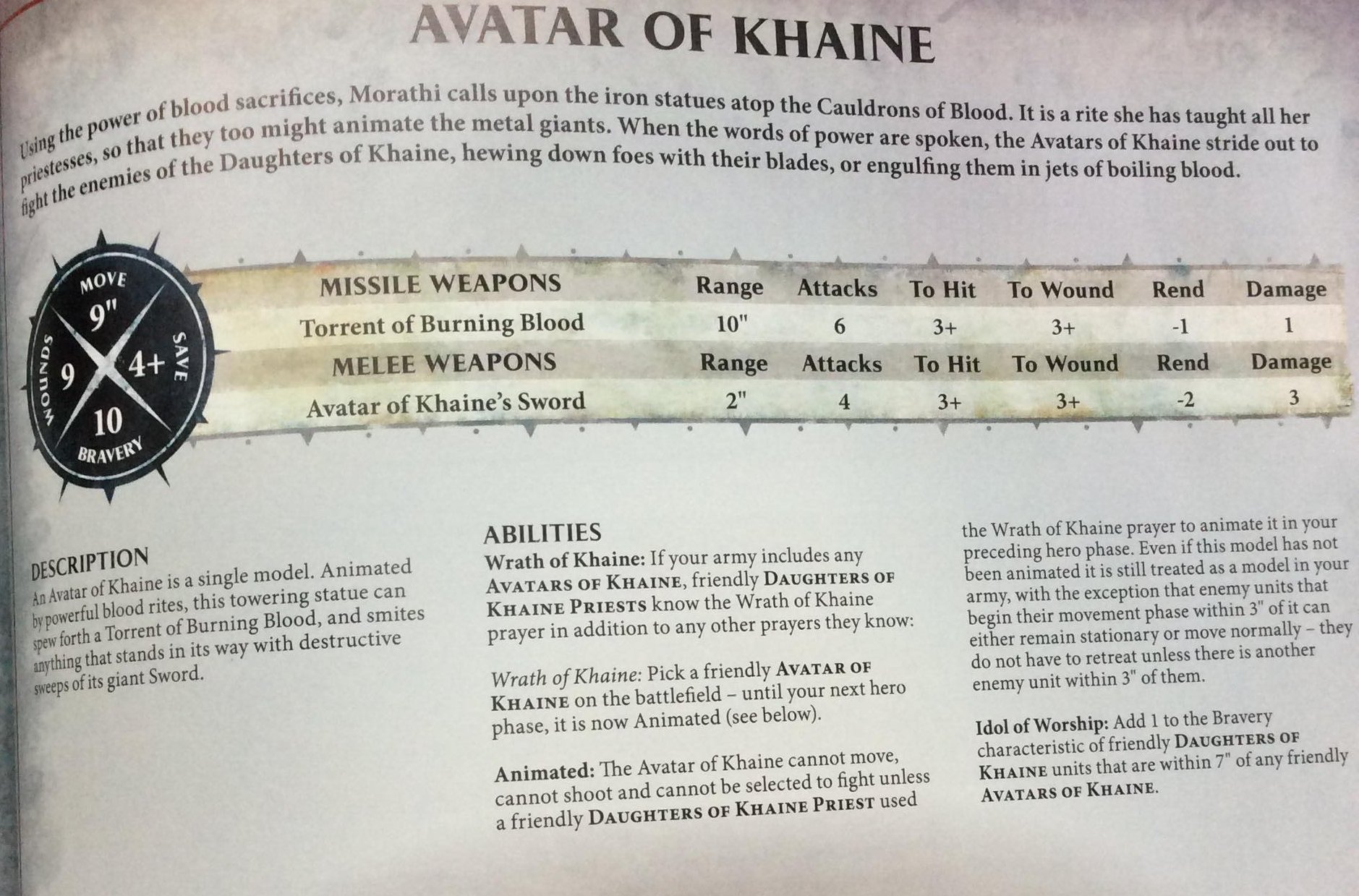 So cool to have an Avatar of Khaine in Aos too ^^, so you need to animate him but once animated he is a Beast !
Plus even in stone form he add 1 to Bravery to friendly DOK (i will explain later why it's super important !)

Blood Sister
Only serpent form models that count as battle line. you can easily get reroll or +1 to hit dealing a large number of mortal each turn.
Can be made super tanky with +1 sv aura, +1 arcane shield, +1 to fanatical faith(fnp), reroll save of 1, reroll fanatical faith.
You can get them sv3+ rr 1 with a 5+ FNP against mortal/normal with rr. Imagine a pack of 20 ! 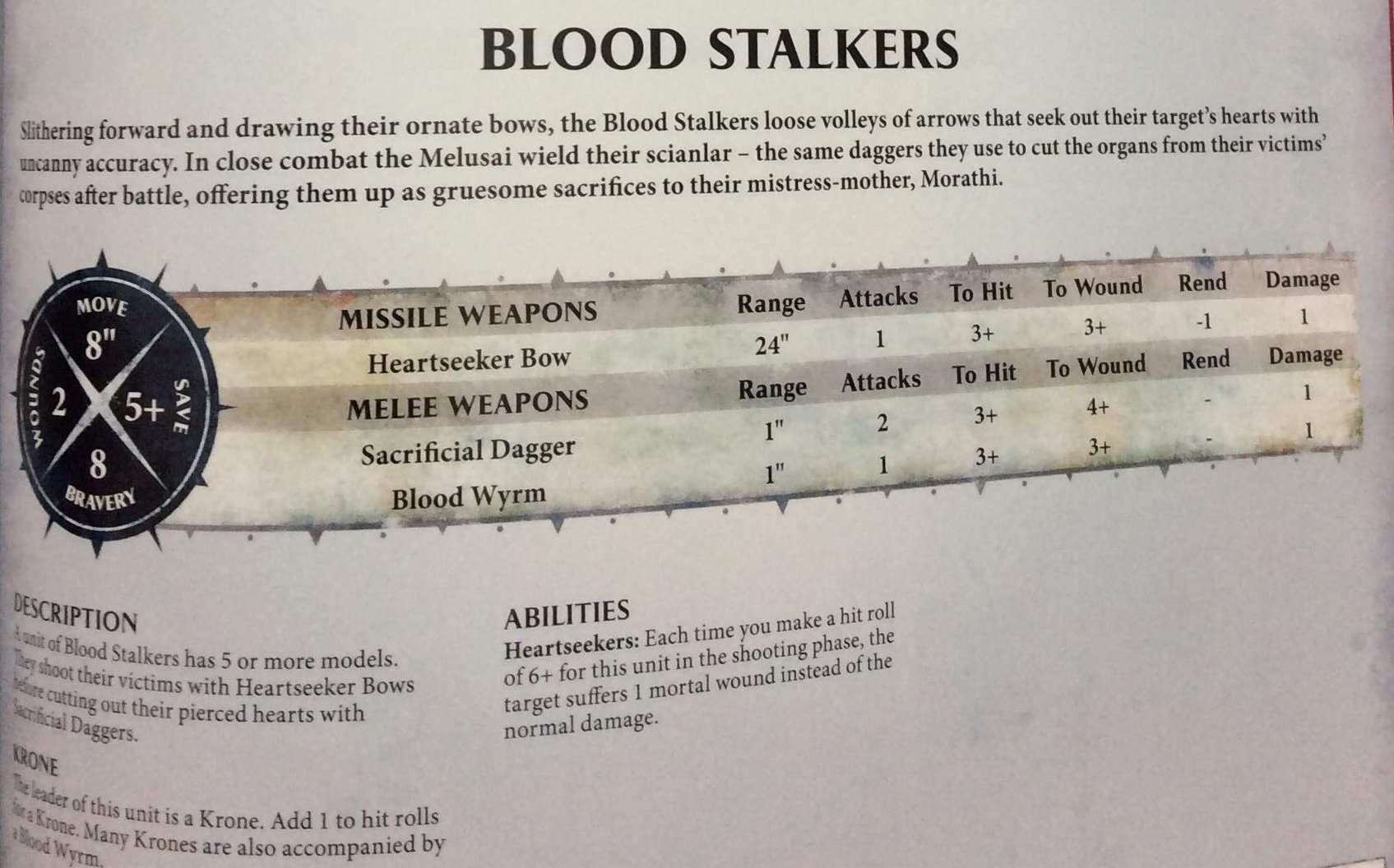 Interesting unit because the statline is not incredible for the price but there is a few combo that i discussed with a friend earlier that are nasty.
A prayer make them HIT TWICE on a 6 (not a 6+) , Morathi in human form make them shoot twice (2 units) , with stormcast ally and a battalion included in the book you could make them shoot one more time. So 40 of them (2 units of 20 for around 1k points^^) could make 100 shots per turn with 2 mortal wound on 6 ^^ (32 mortal). haha sound fun ^^ 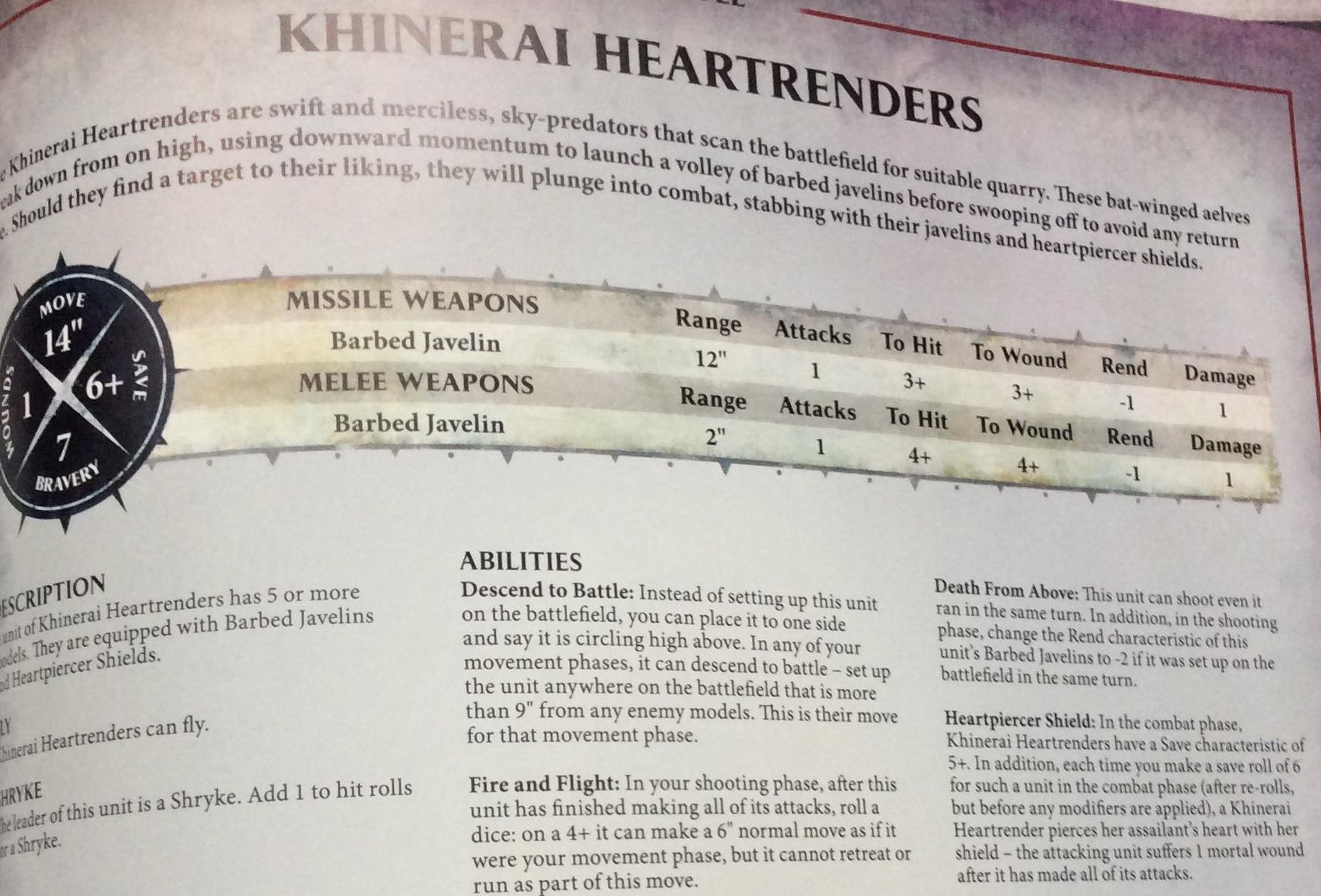 For 80pt per 5 they are not cheap and die like fly, i guess they make good assassination or tanker clearer on a deep strike with 3+ 3+ rend -3 dmg 1. THey could be handy to clear an objective of an brick unit (the one that save at 1+) .
I am sure there are way to use them ;D (big wink a combo shall be revealed later^^)

Same price, 2 attacks, that deal 2 damage on charge. It's good already to clear Wound Wagon but here come the MEGA COMBO :
The Lore of Shadow have a spell named Mindrazor that grant a DOK unit -1 rend and increase weapon dmg by 1 if you have higher bravery (Avatar grant +1 to friendly remember) and another spell super easy to cast (4+) with a range of 18" reduce bravery by 1 or 1d3 if you rolled 8+.
Combining all this you get a cheap unit that charge super far, that fly, where each girl make 2 attack doing 3 dmg with -1 rend. And if you have a priest aviable, you can use the prayer Catechism of murder (on a 6 you get 2 hits). HAHAHA

Ok that's it for the new warscrolls !

There are 4 temple included in the book each one have specials bonus and one battalion modification.
The 4 are : 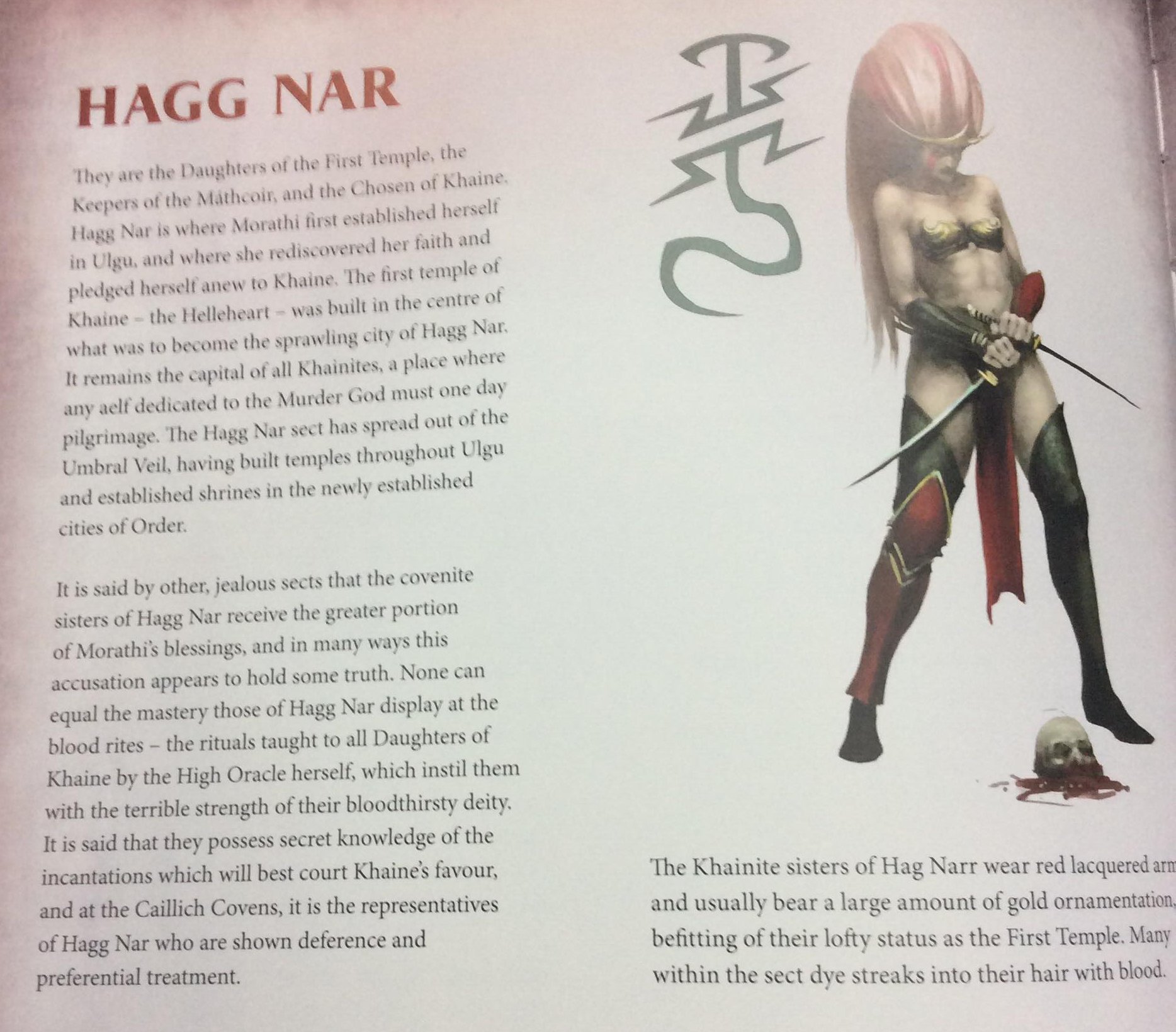 Most favoured one ! with +1 to fnp and reroll hit on turn 3+ 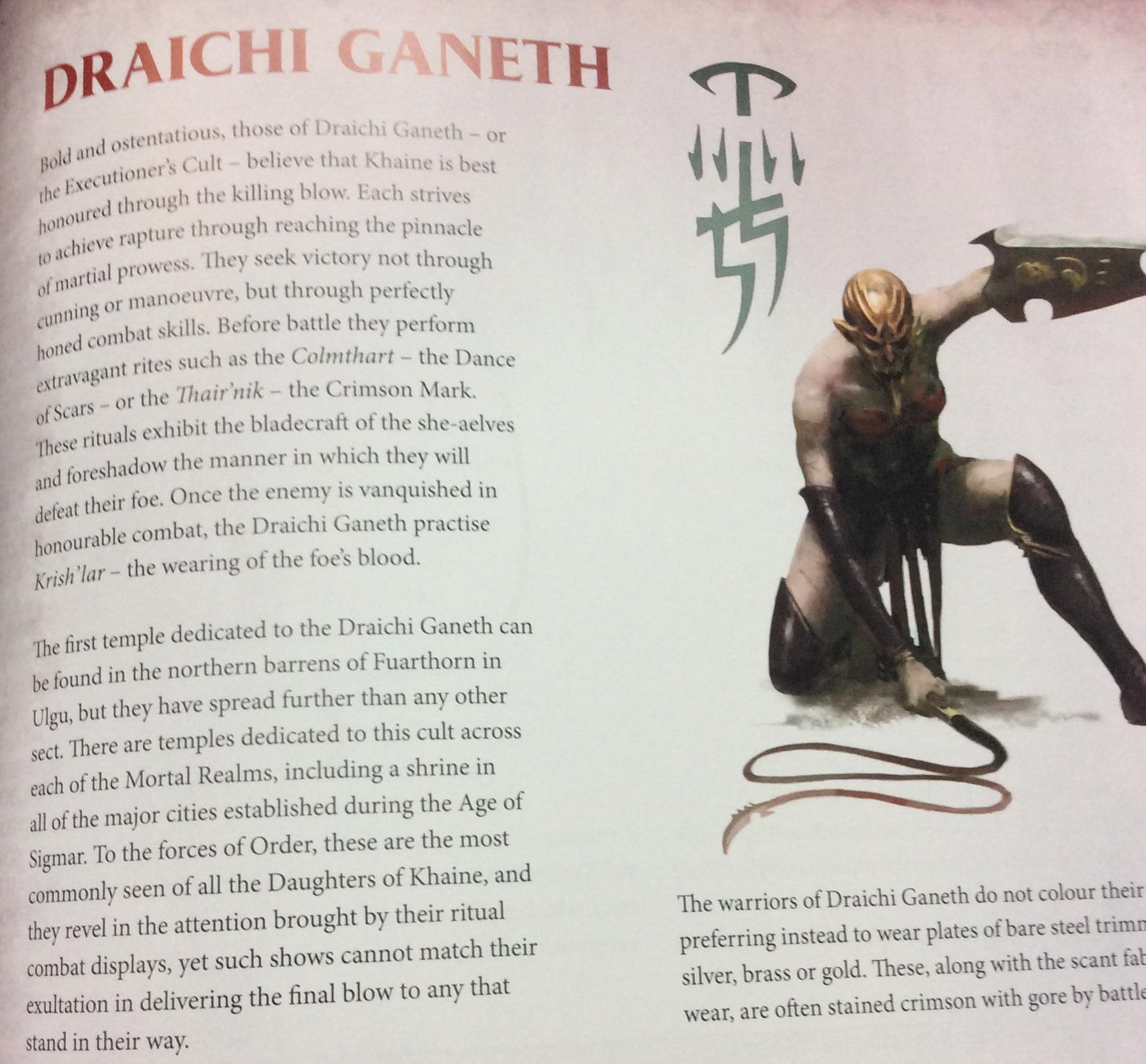 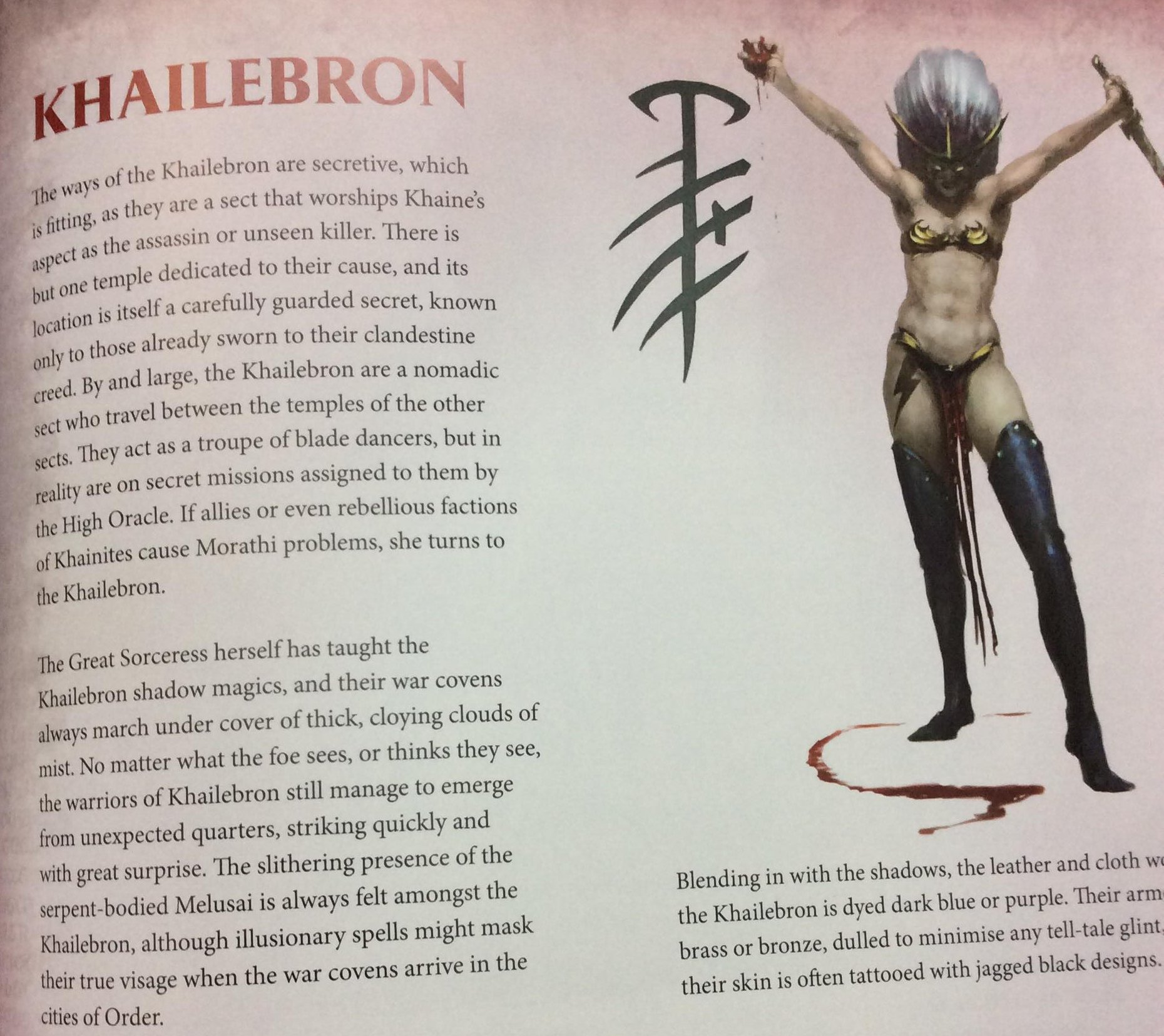 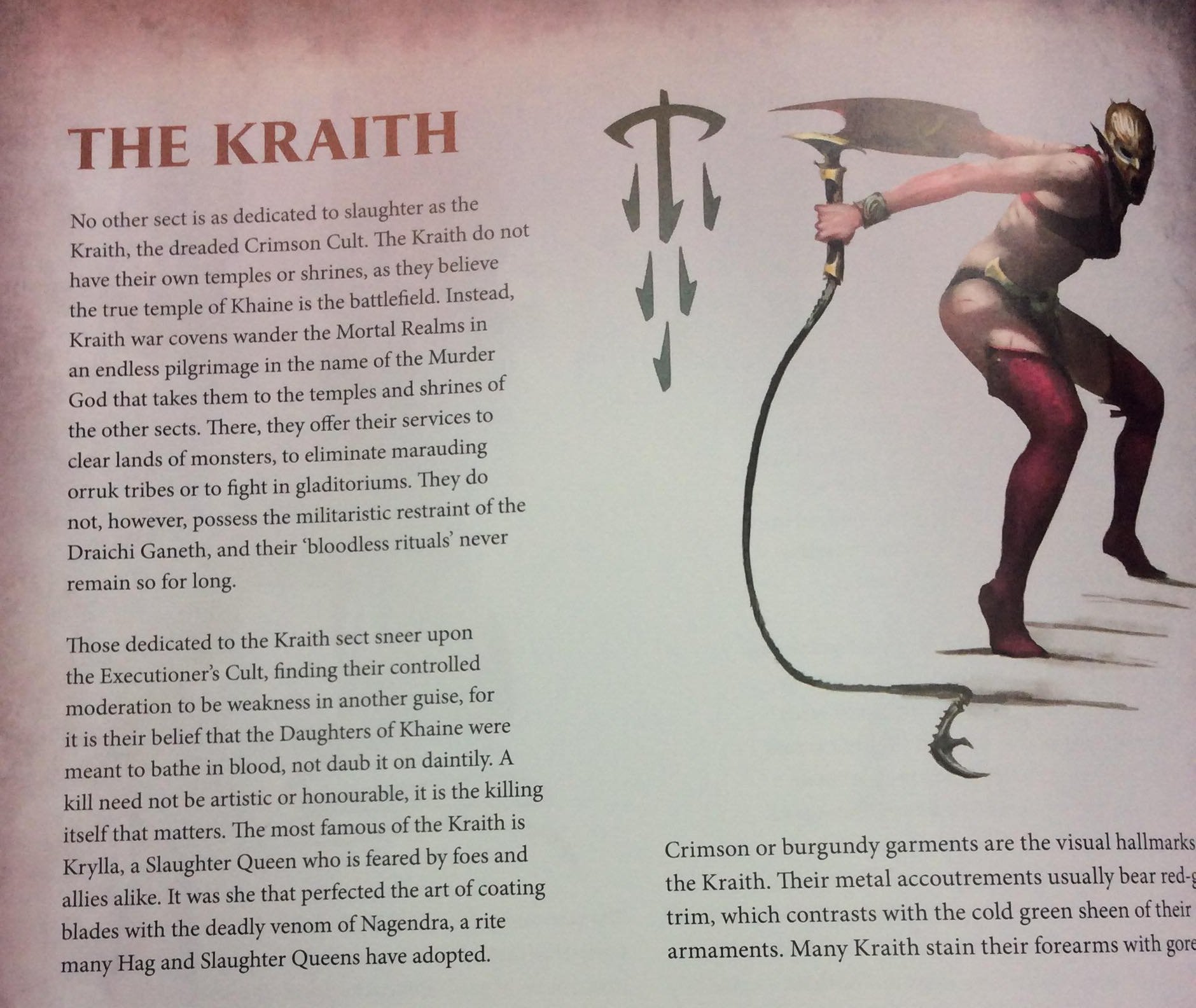 -1 to hit at ranged, new command trait : start hero phase, remove one unit from the battlefield and set it up it anywhere more than 9" and cannot move .

Combo : you just got -2 rend with the Heartrenders, Now select Morathi and choose this unit for her Command ability, they get a free shoot in the hero phase and again during the shooting phase. The only limit is that the teleport is start of the Hero phase so you have to be in 14" of morathi (one model is enough). ho ho ho FaQ/Nerf incoming ^^

-3 list of relics, One for everyone (this image), One for wizards and one for the priests.
-1 Lore of shadow (Super strong)
ex : Mind razor -1 rend and +1 damage(If Bravery >) on weapons on 1 unit

Misc
3 type of heroes : Slaugther Queen Or Hag Queen both are priest have grant very good stuff ! (extra pile in, or reroll dmg )
The hag queen power is not even a command ability ^^ (LOL)

Bloodwrack is the last one, wizard, with a nice debuff spell (-1 to wound range 18) and a ranged attack that is awesome in the meta.
Range 10 roll a D6 for each models, on a 5+ deal 1 mortal wound ^^

I'll finish with these 2 images.

Sorry for delay but computer crashed and couldn't salvage everything :/

You can check most of the warscrolls here