Earlier this week GW sent us the Harlequin codex that go on Pre order Saturday.
For this review i am going to start with arts & fluff, then will do a rules preview.

The art in the codex is quite good, even more than usual. There are tons of illustration spread all around the book giving a good atmosphere to it.
Off course as usual it's subjective, not everyone is a fan of space elves escaped from Venice carnival ! 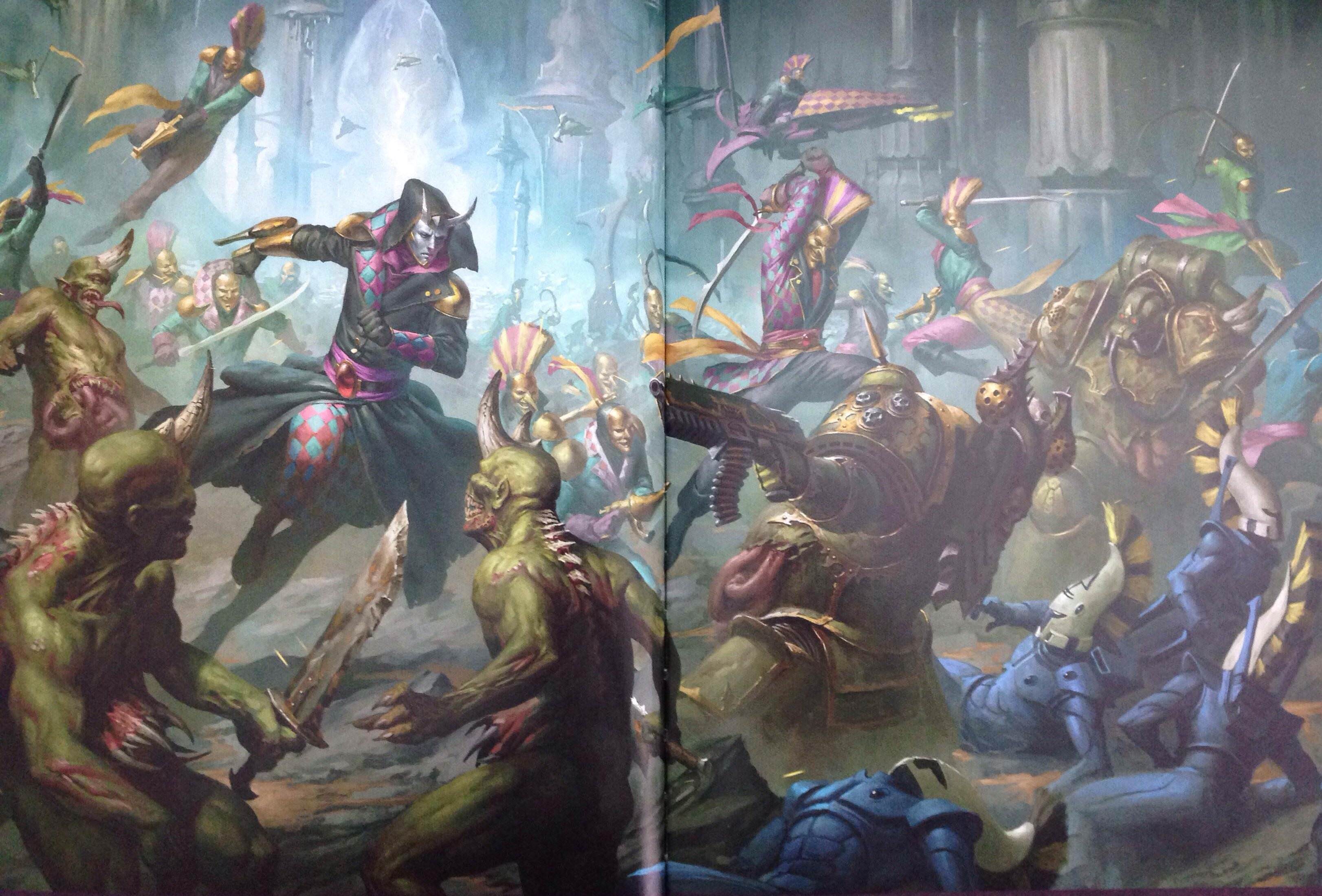 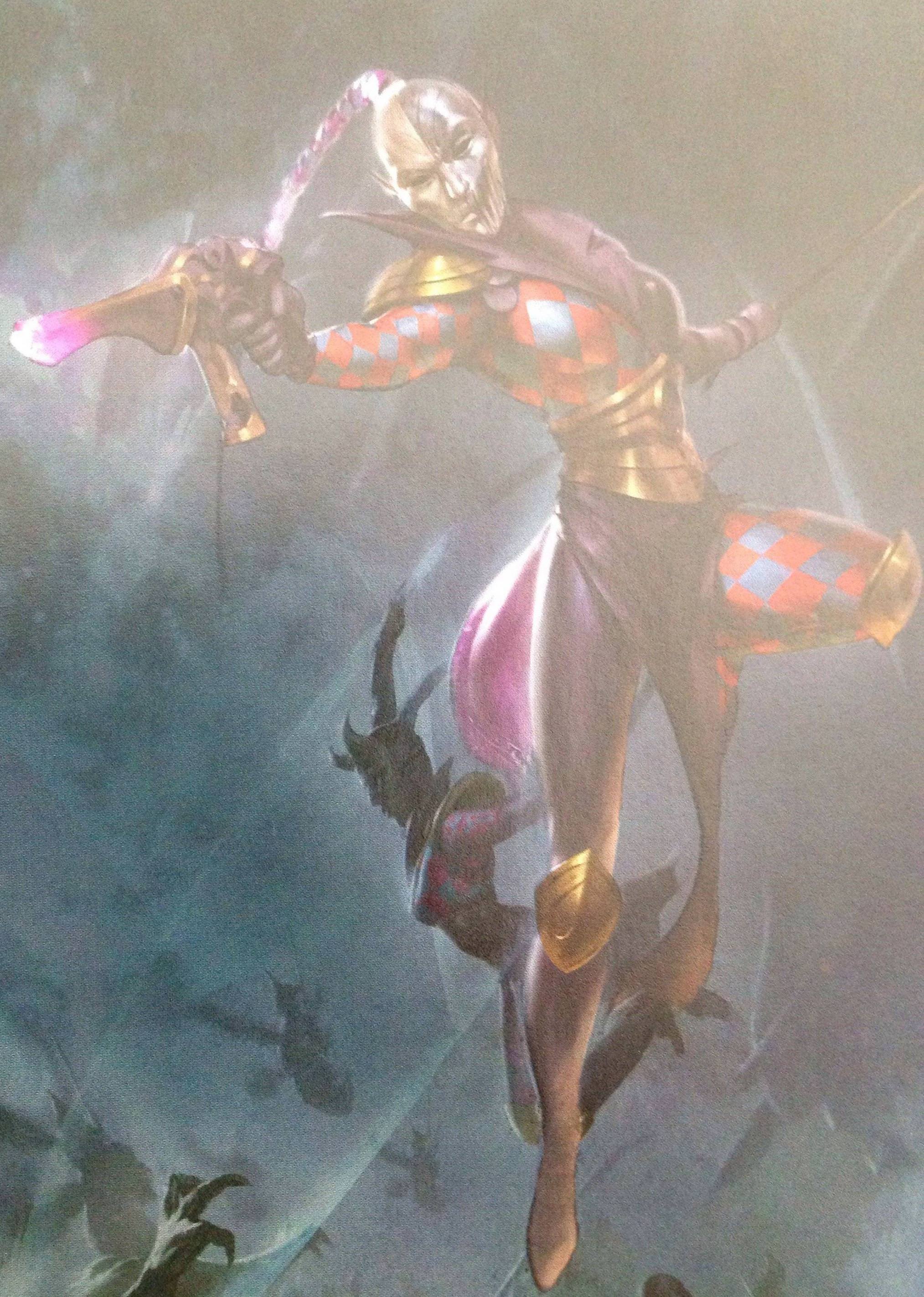 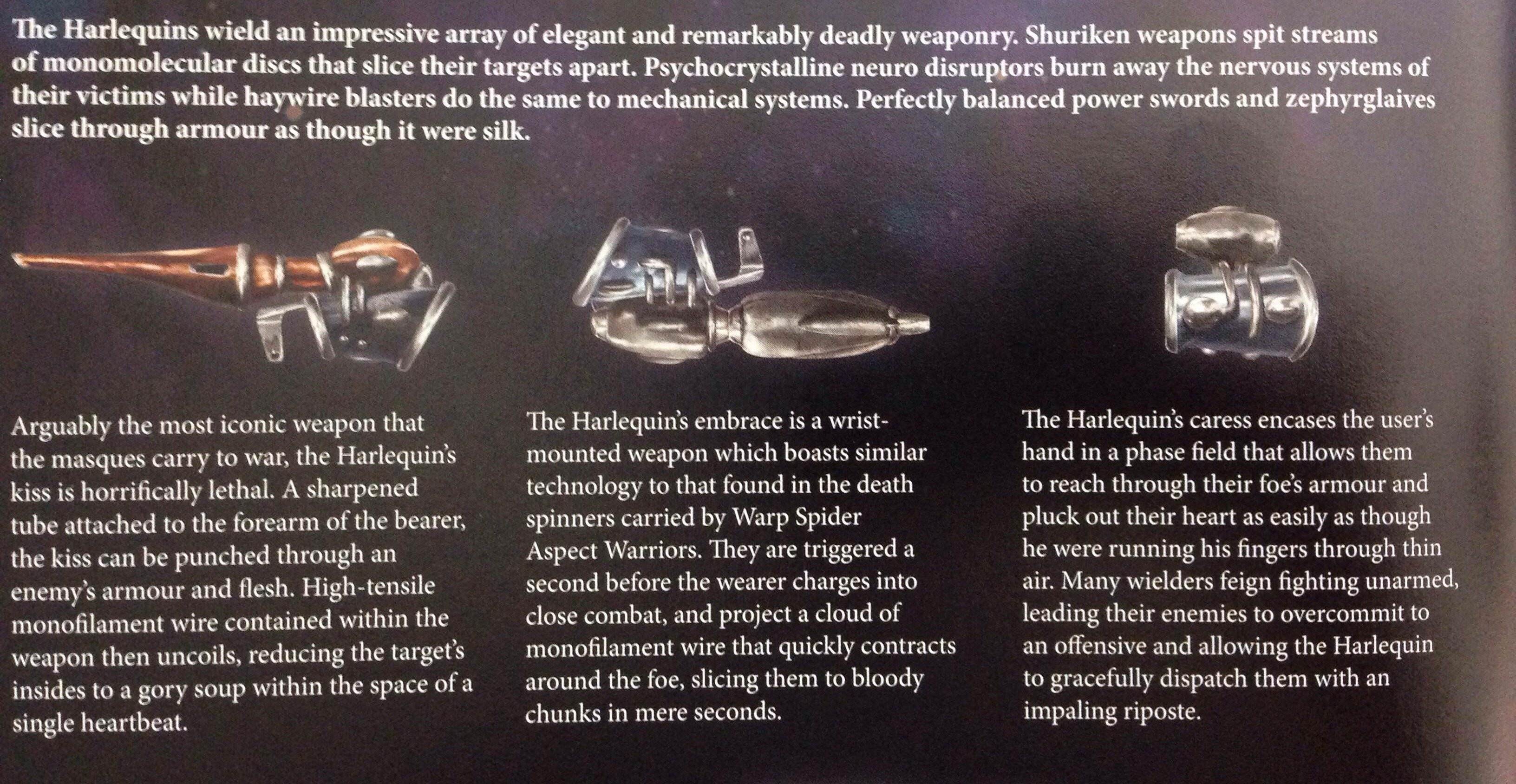 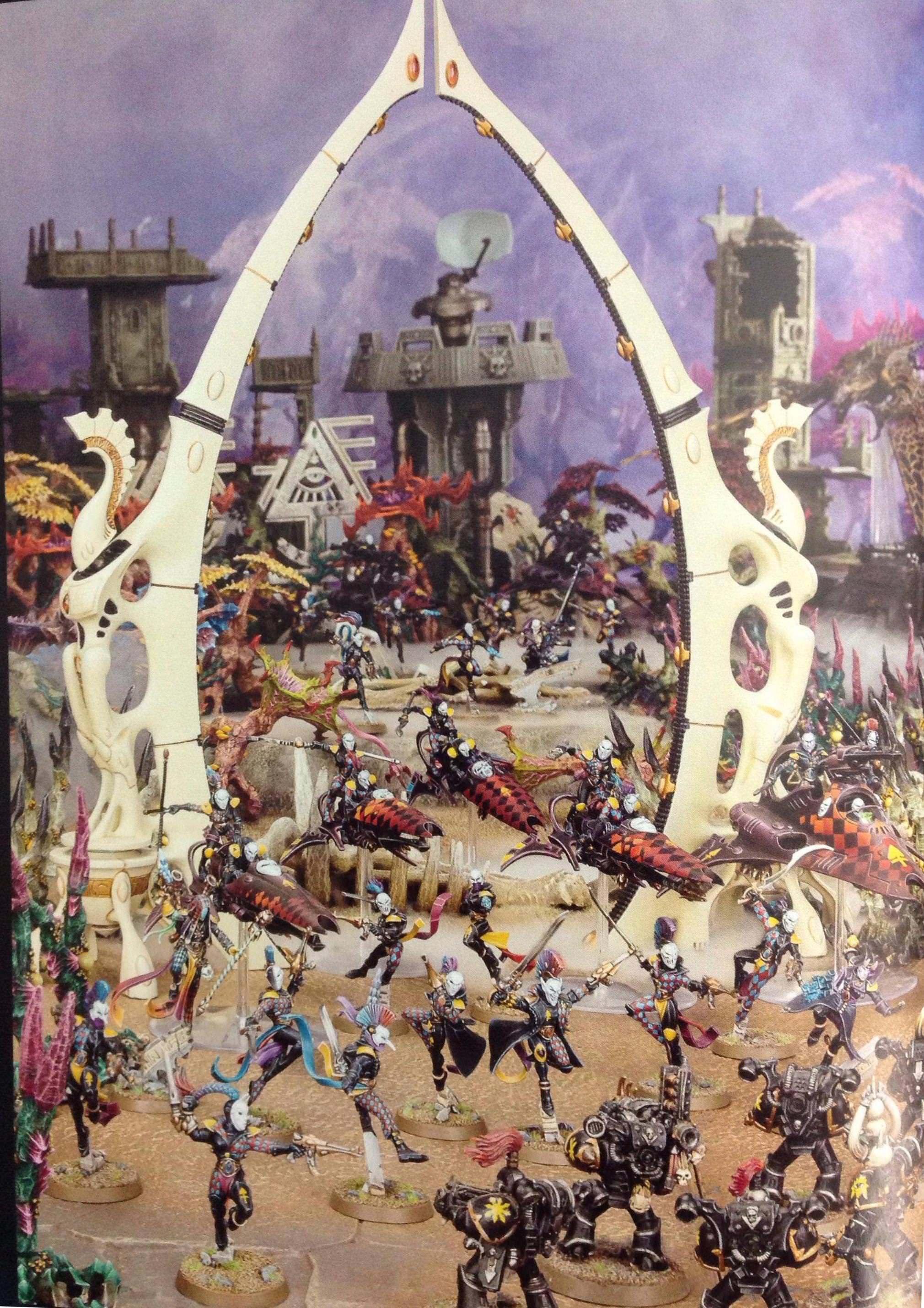 I think illustration of Harlequins are always tricky. I find it hard to render these weirdos ^^. When you read the fluff , it's impossible to put ourselves in their shoes and it must be tough for the artists.

That's the real good point of the codex if you ask me, there is fluff and story on all the important dates of the Eldar fall.
That's not all, you get cosmology, details on every roles in the troupe and lots of little lore snippets from the enemy point of view.

This passage of the book really highlight the life of a troop member.

If you are after good lore about the Harlequins the book is for you !

If you are an Harlequins player, sorry ! Everything is nearly identical of the index. On the other hand it make sense as profile were already good and nothing felt really wrong about their stat line. One thing was wrong in the index, their points cost !! the kiss was 14 points IIRC in the index ! crazy expensive, even with 4 attacks in melee.

Still there are a few changes :

-Death Jester got a little buff in the form of a -2 LD debuff on Shrieker kill.

I think that is all, i may have missed a few things but profile are all identical.

GW heard the Harlequins players, points are going down !

In a nutshell everything is becoming cheaper even the Shadowseer get a -9. Only 1 unit became more expensive, the troop master got +10.
When you think about it a full Troupe(12) with basic equipment is only 156 points !

Just one word : "Solid"
Yea the list is super good, one Seer can take 2 powers, but it's still a difficult choice.
Seer become super support in this codex, they still have the -1 to wounds aura, and they can grant -1 to hit with 2 spells or a 6 FNP bubble.

I have an hard time imagining going to war without 2 of them.

Loads of them as usual, increasing the durability of the army, giving dmg buff or movement trick.

ps : There is 2 Webway stratagem that both break the 9" rules ^^

-i didn't talked much about masque form because GW already spoiled them all here : Link

-Staking -1 to hit seem like a good idea. I have the feeling Starweaver are super hard to kill with proper setup.
Even basic troop feel tanky with Shadowseer support, -1 to hit and wound and 4+ inv. you would need 100 bolter shot (from marines) to kill 12 of them buffed.

-Troupe leader is a must have too ! allowing to re roll wound in melee is super useful when most of the time you wound on 4 or 5. On a 4+ it's a 25% increase in wound roll success.

-Solitaire bomb : Everyone know the solitaire is crazy but you can do a lot worse now ^^ 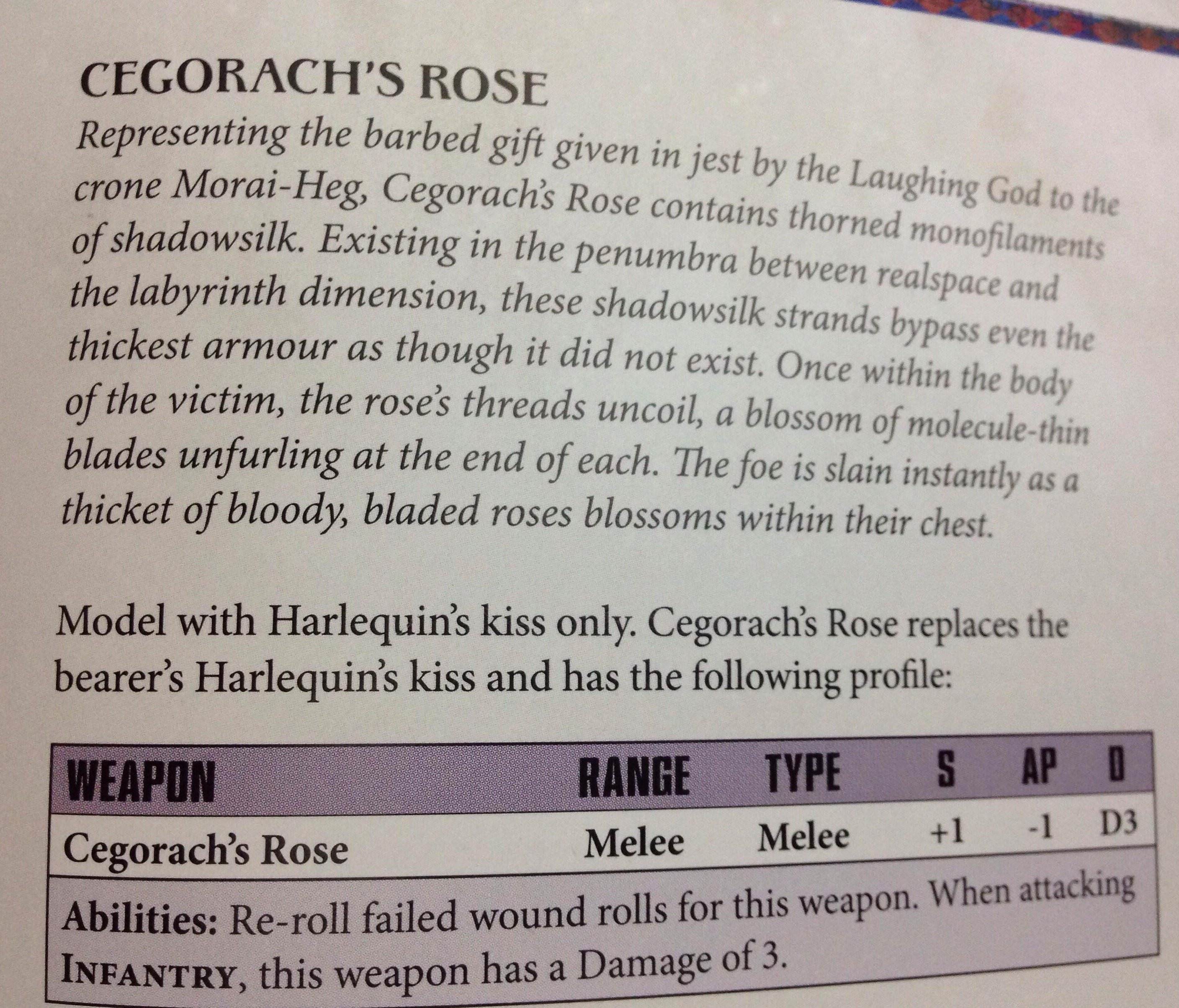 Yea getting reroll wound on 8 (10) attacks hitting on 2+ is quite good ^^ but there is mooorreeee.

One stratagem (2cp) allow a killed model to fight one last time as if it was the melee phase. If the model was killed by chaos or was a Solitaire you get +1 attack and strength. Yes we are looking at 17 to 21 attack hitting on 2+, S5 then 6 rerolling to wound dealing 3 dmg on Inf ! (or 1d3 on the rest).

As you know, one masque allow to run and shoot inside transport without penalty and transform pistol in assault weapons. That mean that you can rush a side of the table with bunch of weaver and focus a small zone with a bunch of dakka. You get a a 22" move (run included) and all your weapons are assault or count as assault.

There are multiple way to debuff the LD of enemy models in the army. Combined, each Shadowseer can easily deal 1d3 mortal wound per turn at 18" range. Having 3 or 4 of them generate good MW damage.

Cost is 120 pt , no harlequin keywords (for stratagem).

Allow to place units in a Webway "SPAR". Other deep strike mechanism doesn't include the spar words.
Meaning they don't communicate.(i think)

-There is a stratagem to salvage one unit from a Webway destruction.
-A second stratagem(1cp) to deploy 1 or 2 units and ignoring the 9", deploy is made at the end of the mov phase.

I am not convinced by the Webway gate in an Harlequin army, because most anti tank weapons are wasted on them, so why give the enemy good value out of it?. If your are playing Eldar full mech it could be good^^

Ps : If it allow to bypass the beta rule about deep strike it's a different story ^^

Ok that's it with the review time to conclude

This is a quite ok codex, not as rich as the Death Watch one but still good. Off course having only 1 troop choice with no other options than pistol or melee weapons is limitating. But they are Harlequins, so all is forgiven :D
On the other hand the Stratagems are all very good and that give a lot of depth to the army. Same for the psychic power they are awesome and improve the game a lot.