~100 pages dedied to it.
-The side of the pages have a different color than the fluff part so it's easier to find the right section.
-The book present you the 3 ways to play
-The rules are the same 20 pages you get on the ageofsigmar.com

This is a new section of the rules book ! Filled with Allegiance, Realms rules, specials spells and so on...

A light version of what's inside the General Handbook. For each Grand Alliance :
-The Allegiance Abilities of the 4 Allegiances.
-Commands traits.
-Artefacts. 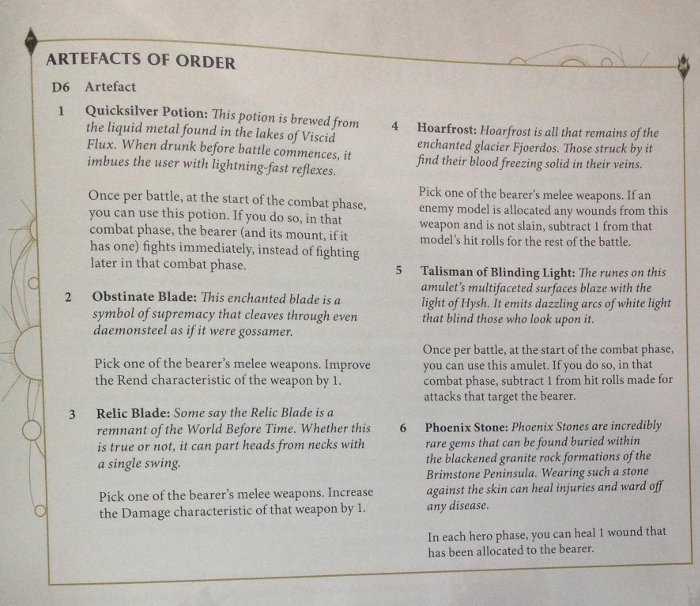 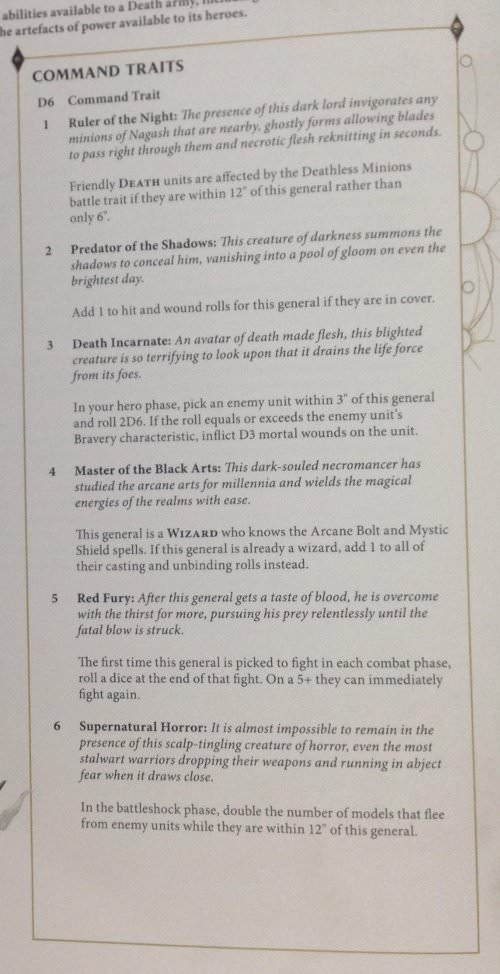 Before the battle you can decide that the battle is going to take place in a specific realm, adding a few rules, event, spells, Command abilities for both players.

One page per Realm with each time :
-A spell every wizard know.
-1 to 2 commands
-1 random Realm Scape Feature (roll 1d6) 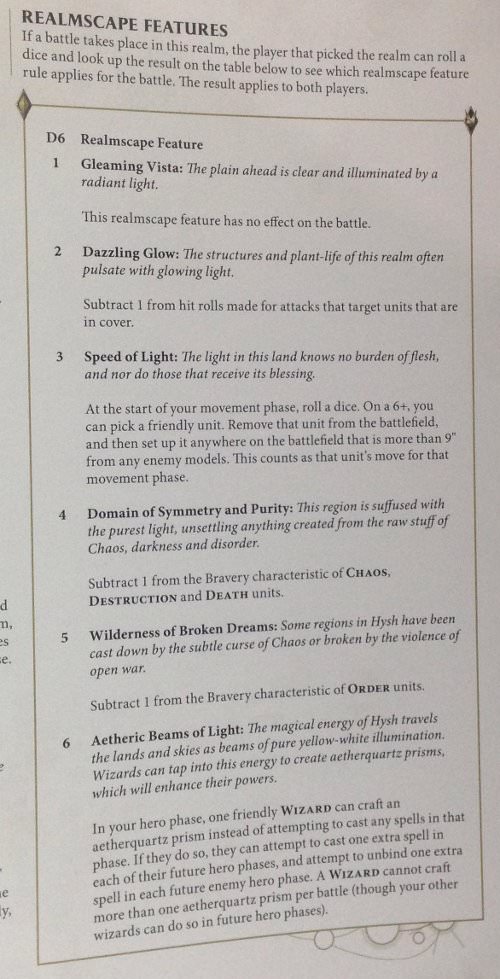 These Realm rules look optional to me but are super interesting !!! And some are super fun to use.


You get the full rules on how Endless spells works and one Endless spell warscroll (Balewind Vortex).
It's the same rules as in Malign Sorcery. 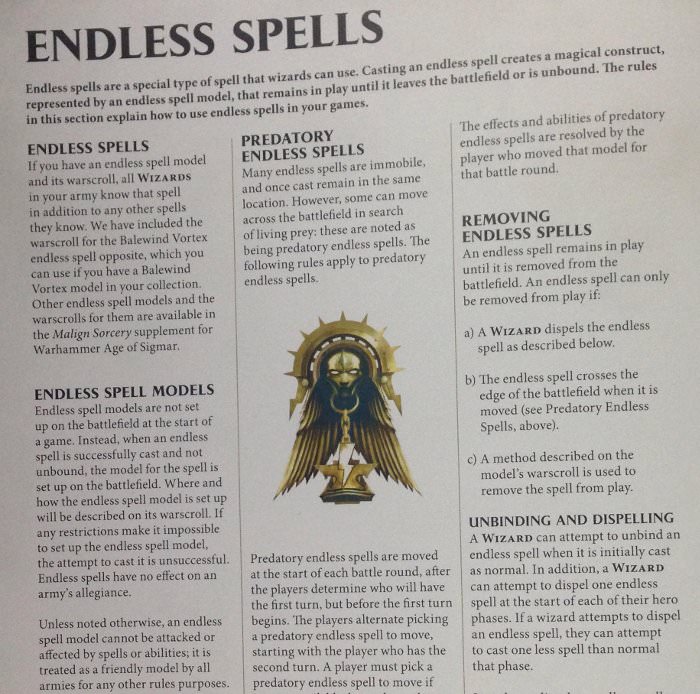 -Still a Yolo mode where you play what you want. It's fine if you are playing with good friends (and sensible).
-There is an open war Battleplan Generator (well made)
-Multiplayer games : Coalition of Death ! (always super fun). The twist is to choose a warlord by faction that get final words for pile in order, or charge order. + 3 battleplans.
-Ladder Campaign. (mini campaign mode with a ladder ranking) 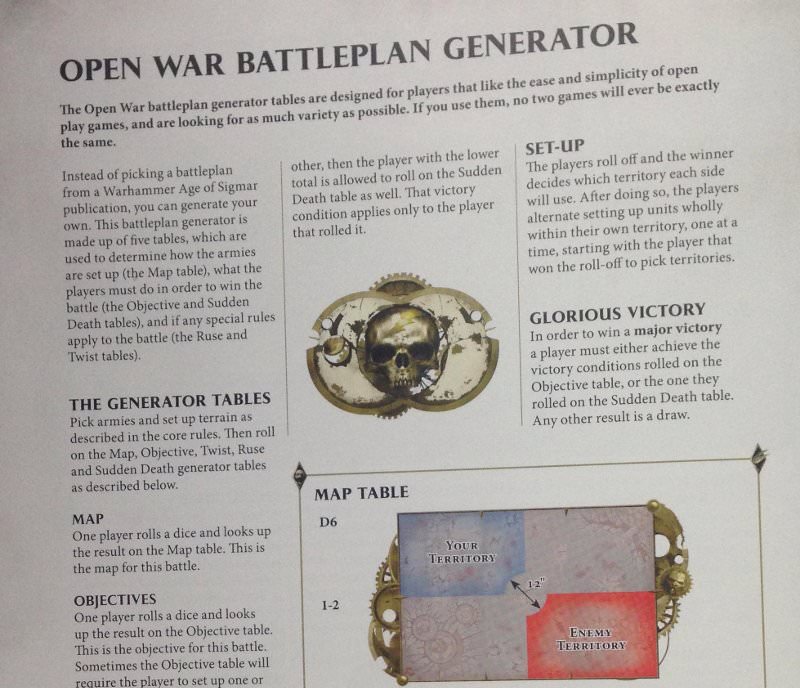 Narrative mode can be played in Open play or in Matched play it's up to you. But the accent is made on the background of the game.
Scenery is important too as you are trying to tell a story. A bit like you would do in a pen & paper rpg.

GW give some advices :
-Games Masters : advocate the use of a game master in charge of managing the game.
-A bit of advertising of the old realm book
-Exemple of the war in the Glymmsforge Catacombs.
-Quest of Ghla Maraz Narrative Battle.
-Campaigns in the Mortal Realms by using Season of war Firestorm. 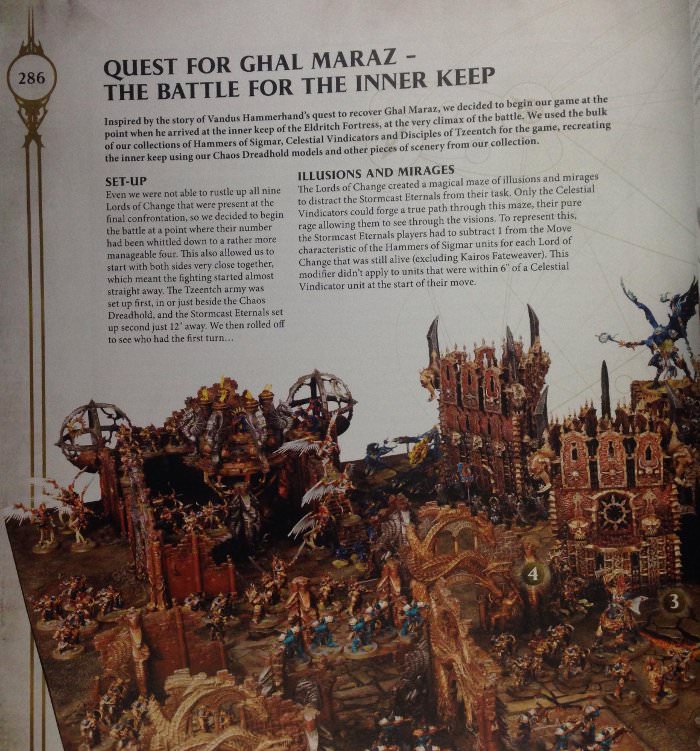 Sieges in the Age of Sigmar

-6 pages on how to do sieges battles (YAY)
-Different siege phases (pre-battle) where you can use tunnels, gather supplies ... It's similar to siege in Firestorm Campaign (IIRC)
-3 command abilities for the attacker 3 for the defender.
-2 BattlePlans. 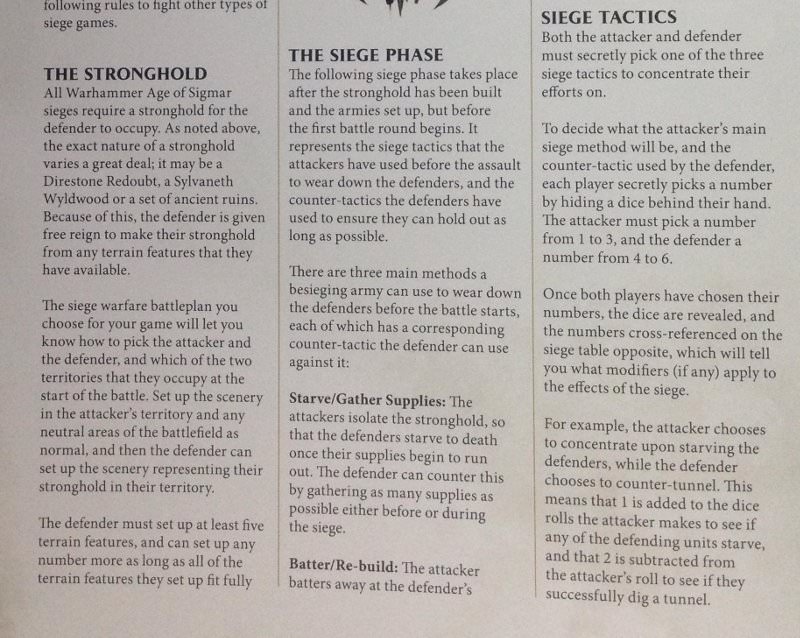 
The Landscapes of the Mortal Realms are often riddle with subterranean tunnels and caverns. Frantic Battles are often fought to control these darkened passageways, turning the underground world into a battlefield that is just as bloody as any found on the surface

Yay Underground battle ! I still remember this mission in the old warhammer battle game (on SNES?) fighting against hordeeee of skavens in an underground tunnel. 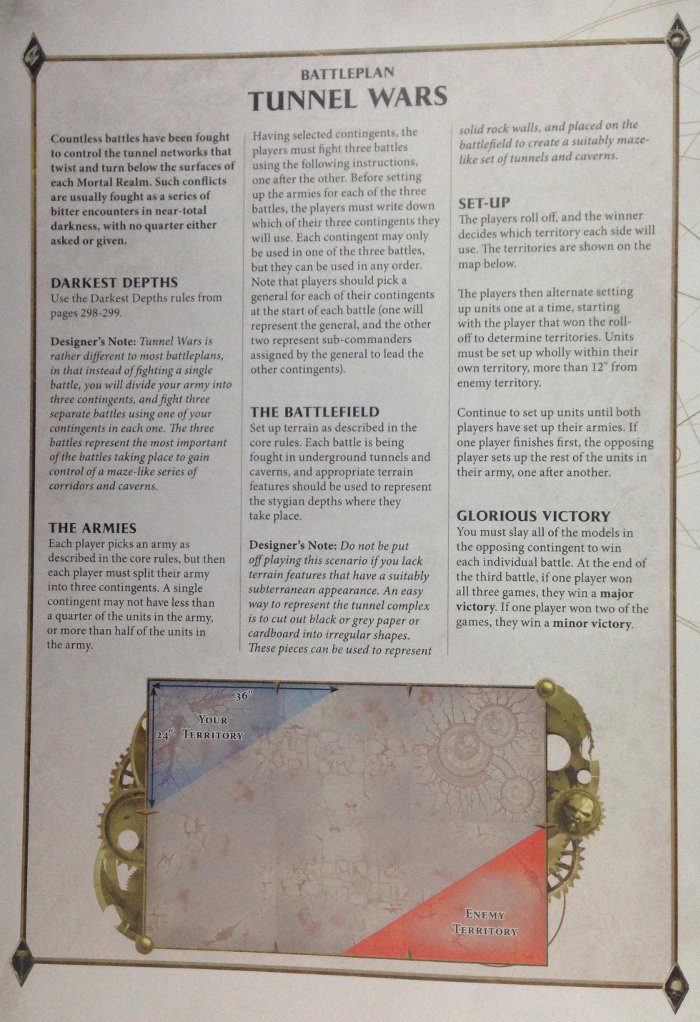 Still my favorite way to play with friends !!
Mostly the same rules but with a few extra tweak to make the game smoother !!
Now you can even bribe other player with Command points !.
They added a table of secret objectives (1d6 options.)
+ 2 Battleplans ! 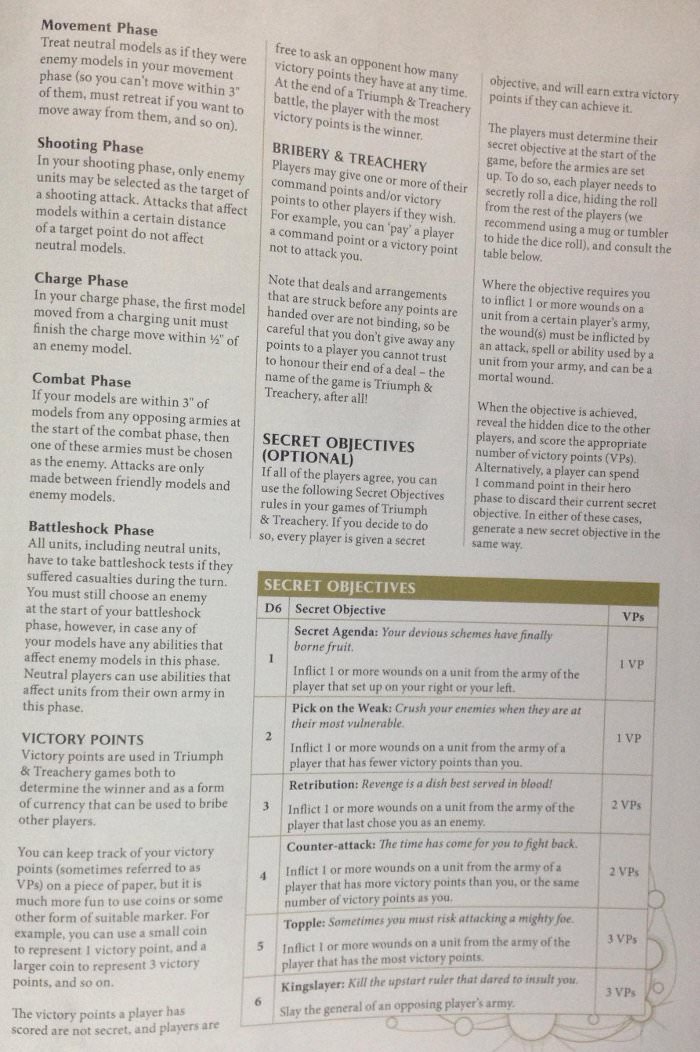 The last 10 pages of the book are dedicated to matched play !
Pitched battle chart (points, leader, battleline, allied units)
6 Battleplans are included in the rulebook
The rule for converting points in extra command points. 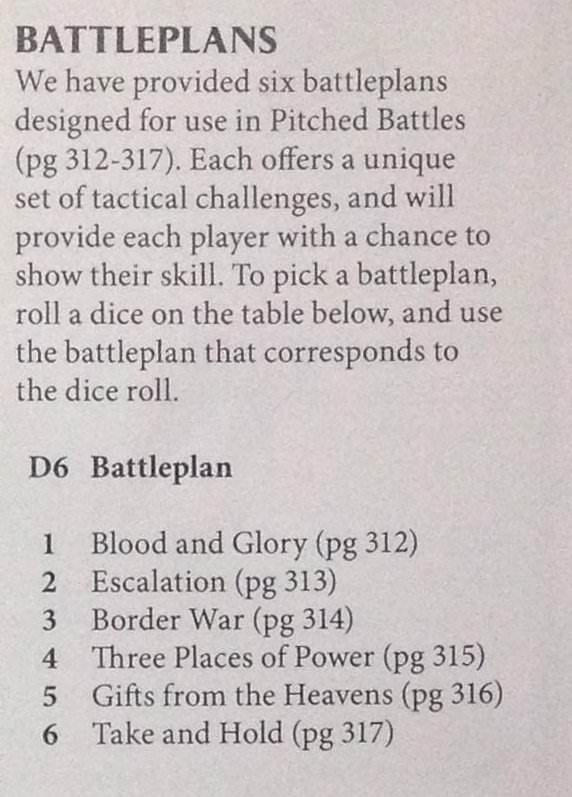 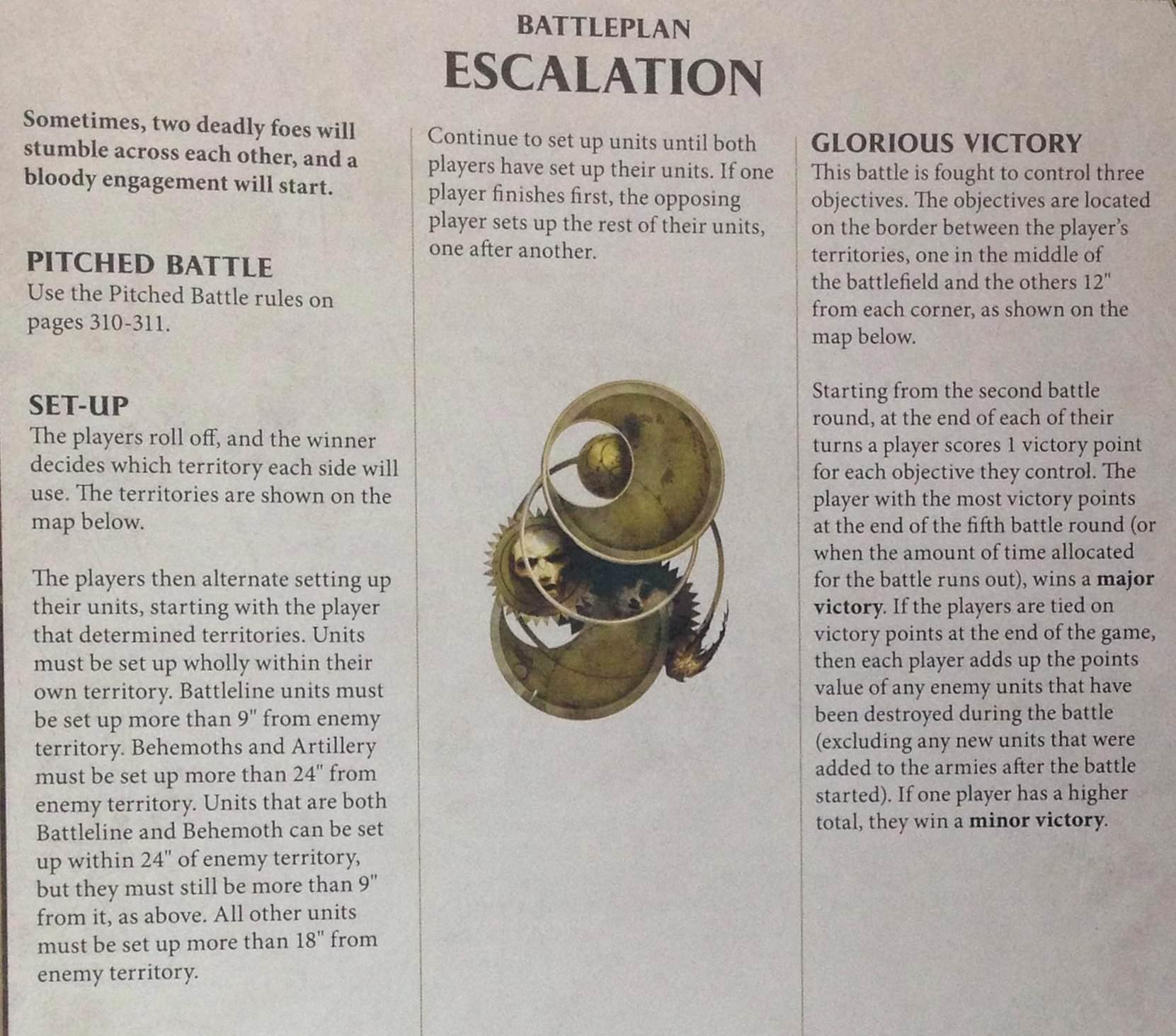 : Very interesting, it's random objectives generation during games on D66. 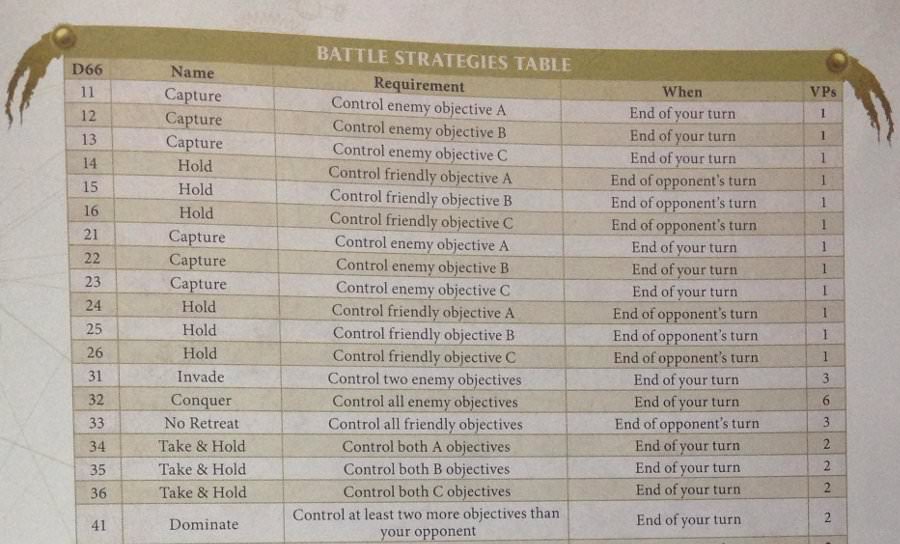 That complete the review of the Aos core book !
I wanted to keep it short because GH2018 is the important book.
The Gaming section was shorter and it's normal since they have another products for this purpose (General Hanbook).
If you are starting AOS, the rulebook is the perfect starting points. Off course it's even better with the soul war box but if you have an old army and want to test the AOS it's perfect !