The General Handbook is a soft cover book with 137 pages. Good quality, in the line with the souls war material. A bit better than last year GH.
All the pages are used, even the last one have an Orruck Battalion on it ^^
The 3 ways to play are still present and approached in details from what we had in the Core Rule Book !

Open, Narrative, Matched play are the 3 play modes in the GH2018.

As described by GW : The best ideas are always the simpliest ! Open play ride on this idea. Take your models and play against your friends ^^
8 pages are dedicated to the open play.

Battleplan Generator
Generate a game in a minute !!
Roll from 12 deployments options, 6 objectives, 6 ruses, 6 sudden deaths and 6 twists.
No game should be the same ever(ish). To be honest after spending a few moments considering them, it's a fine way to play. You can even combine the generator with the points values of the matched play section for something more constructed and fair. 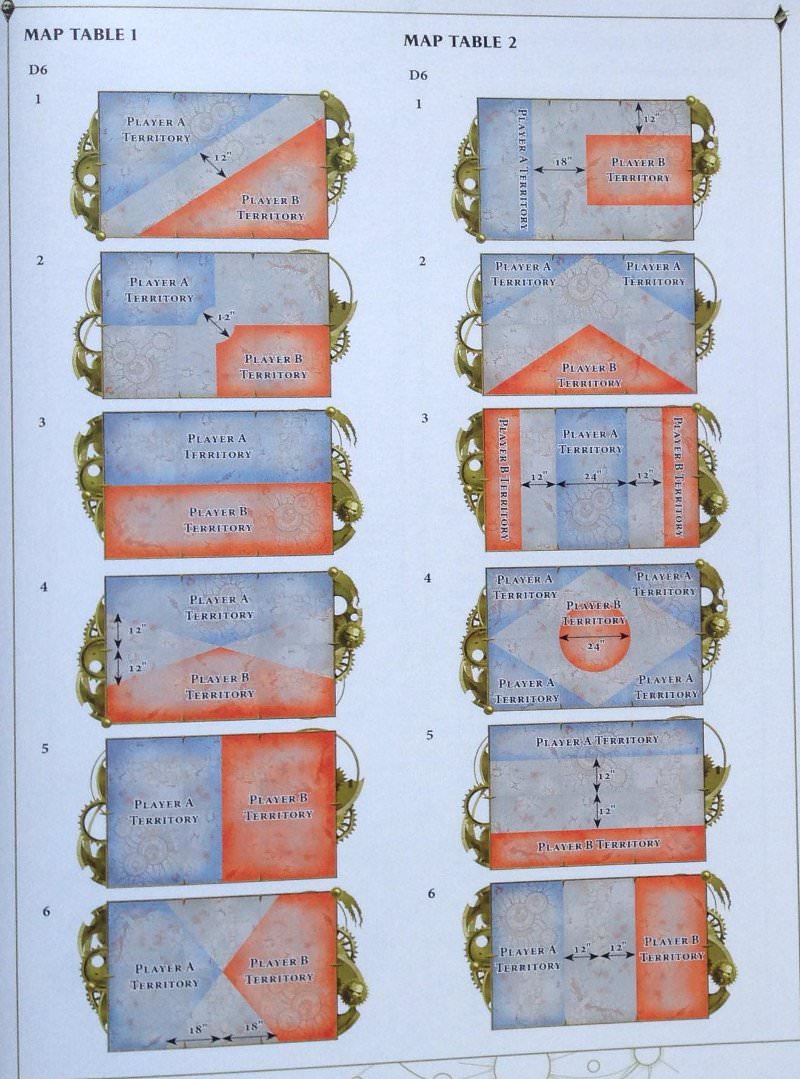 Aerial Battle !!!
I don't know why it's not in the Narrative part of the book, but it give you the rule for 2 types of aerial battle.
: Fly only map, ground troops are stuck in garrison and shoot at the main actors !
Overhead : 2 level of play, the flyer and the ground troops.

2 battleplans proposed, 2 tables of twists and objectives (1d6 each). Explanation on how to use the Battleplan generator for Air battle !

Great idea this aerial mode, of course as an Beast Herd player apart from a Jabberslythe i have nothing that fly ^^

Around 20 pages of material. Complete what was offered on the Core Rule Book.
The main thing are 42 specials rules that you can add to your battle.

There are a lot of them (42) , you can add as many as you want. The authors warn you about "bogging down the game pace" if you add too much. The idea is to spice up your game with new interactions and rules. Off course you can combine this with Battleplan generation, Mortal realms special rules, random objectives, Firestorm campaign, ...This is limitless and offer your quite a lot of freedom. 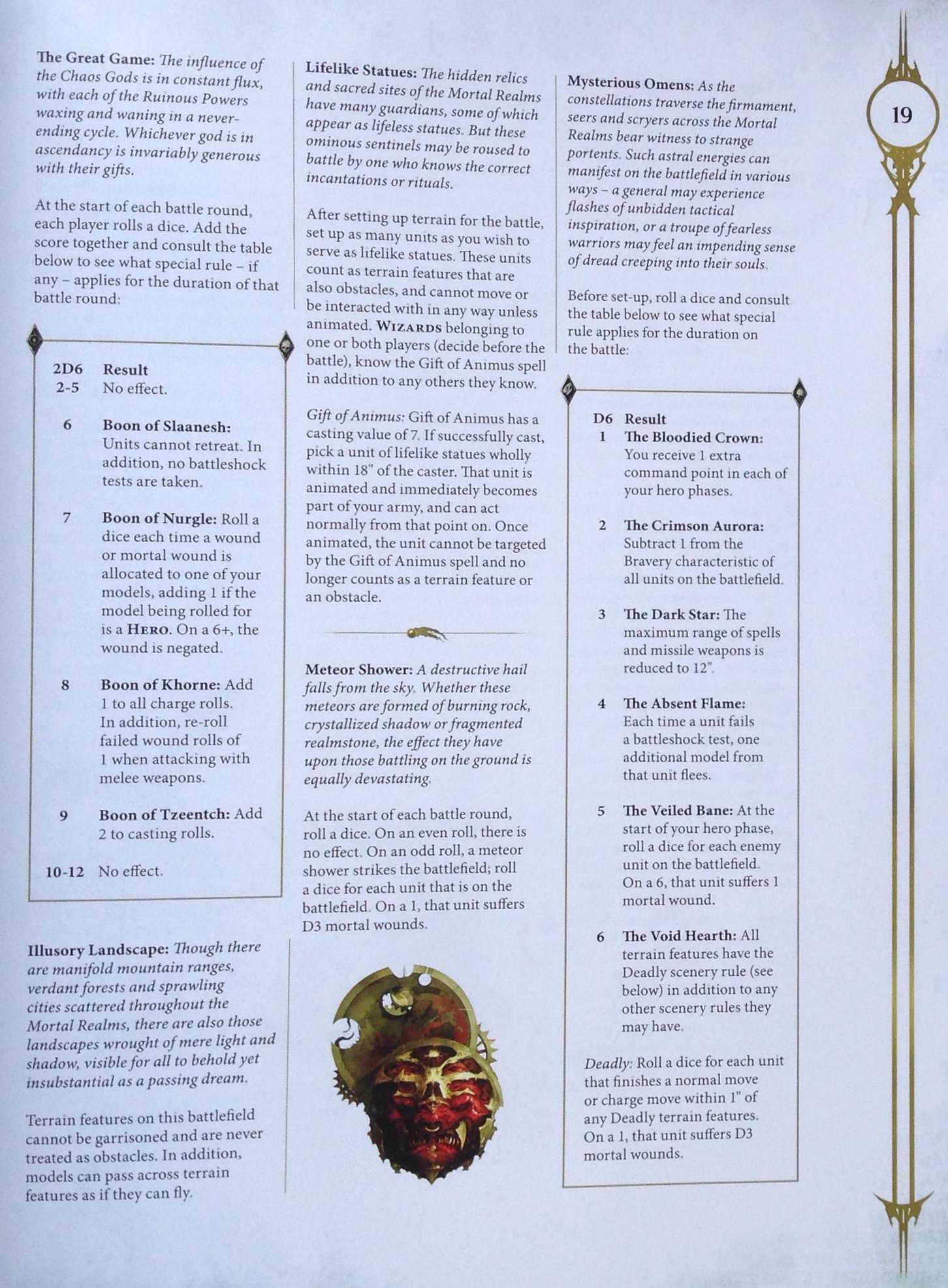 Gh2018 offer 2 battleplans about 2 big historical battles of the Mortal Realms !
-The cascading path battle (nurgle vs sylvaneth)
-War in the Glymmsforge Catacombs.
Both are tempting and with an interesting background ! (really liked the Second siege of Glymmsforge !)

Gathering of might provide a set of simple modifications to the Warhammer AOS core rules that allows a massive game featuring hundred of models on either side to be played at a faster and more satisfying pace than would normally be possible.

Yes this is AosPocalyspe and it's offer a fair numbers of optimisations :

-Timed deployment / secret biding (you bid time ^^)
-Reserve start on second round and limited to own half.
-3 commands points per turn
-Double range of ranged weapons (with a -1)
-Simultaneous combat (everyone pile in and then everyone fight at the same time)
-Legendary Traits, artefacts, Gift of gods, spells
-2 Battleplans.

Off course i didn't tested this mode yet, but from 5000+ points per side it's better to go with these rules i think (unless you have a lot of time to play your game off course) 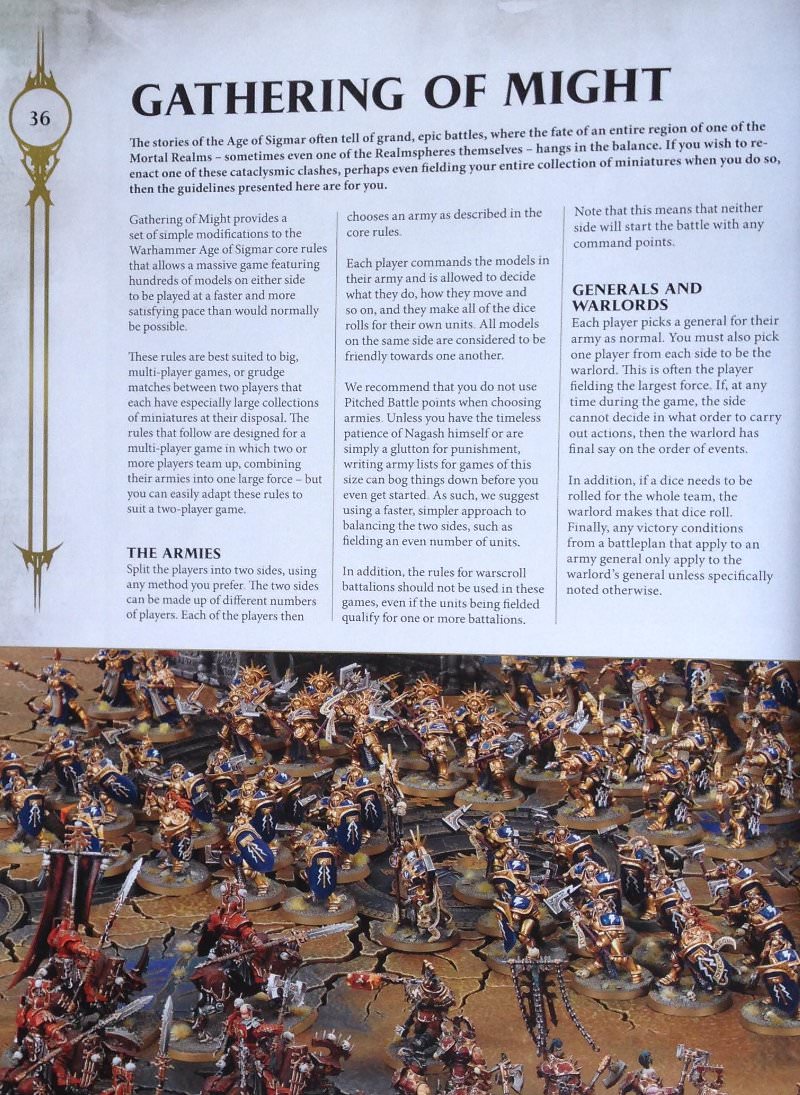 No revolution here :
-Pitched Battle chart (no change)
-Battleplans (12 included) but if you random the mission it's 3 tables of 6 (The 6 first are in the Core rule book) so you need both book (weird)
-Points listing (models, formation, scenery, endless spells, shadespire)
-Allied table 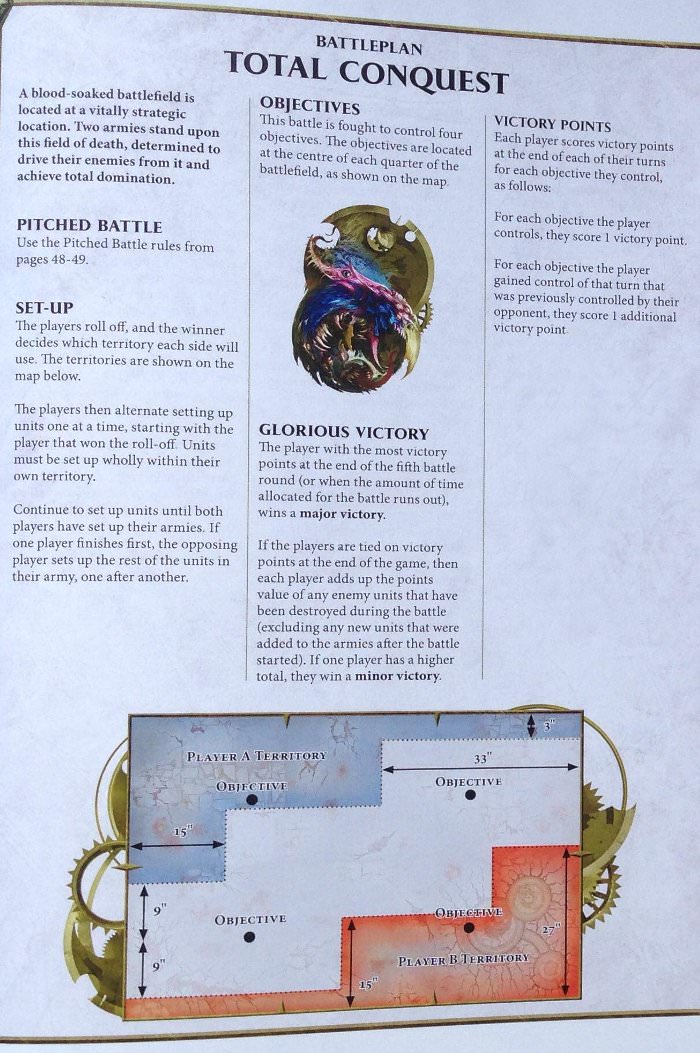 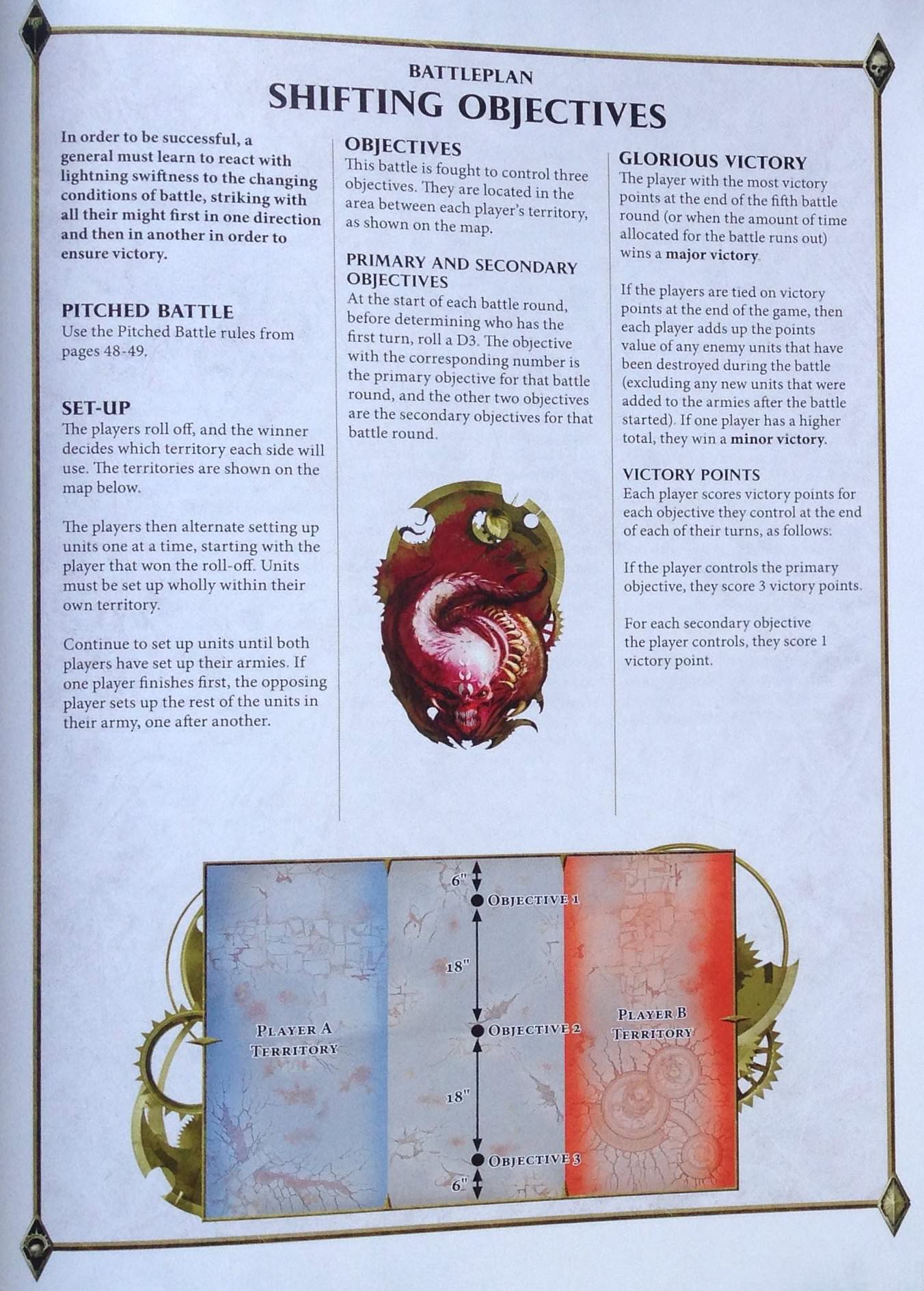 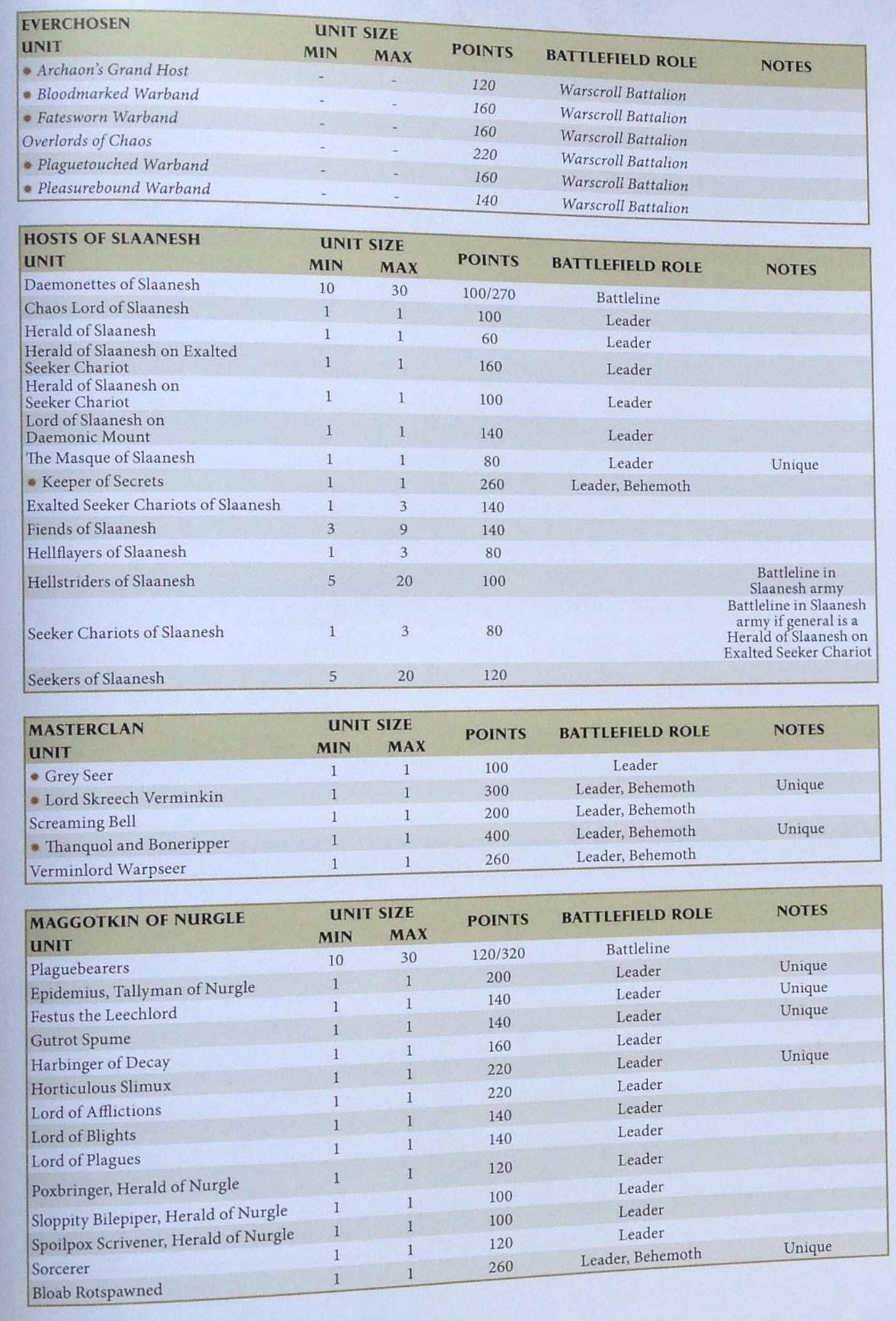 Good stuff !! Nothing spectacular but it's what you hope to find in these parts^^
Points are increased on heroes, wizard reduced price on most of the battalions.
Some multi-wounds units got very good discount.
Hard to predict what going to happen with the nerf to the conga line ^^

With this end the 3 ways to play description. I am not sure even sure we need the distinction anymore.
Maybe GW could merge free, narrative and matched play and keep a tournament play mode. It's no big deal but the separation feel artifical now.

You already know the gist of it. All the summon mechanisms have been changed/removed.
Some warscrolls were modified to include a one time summon (like allariel.) It's a super interesting evolution and it's make summon great again. I am sure some fine tuning going to happen in the future but it's already really good ! 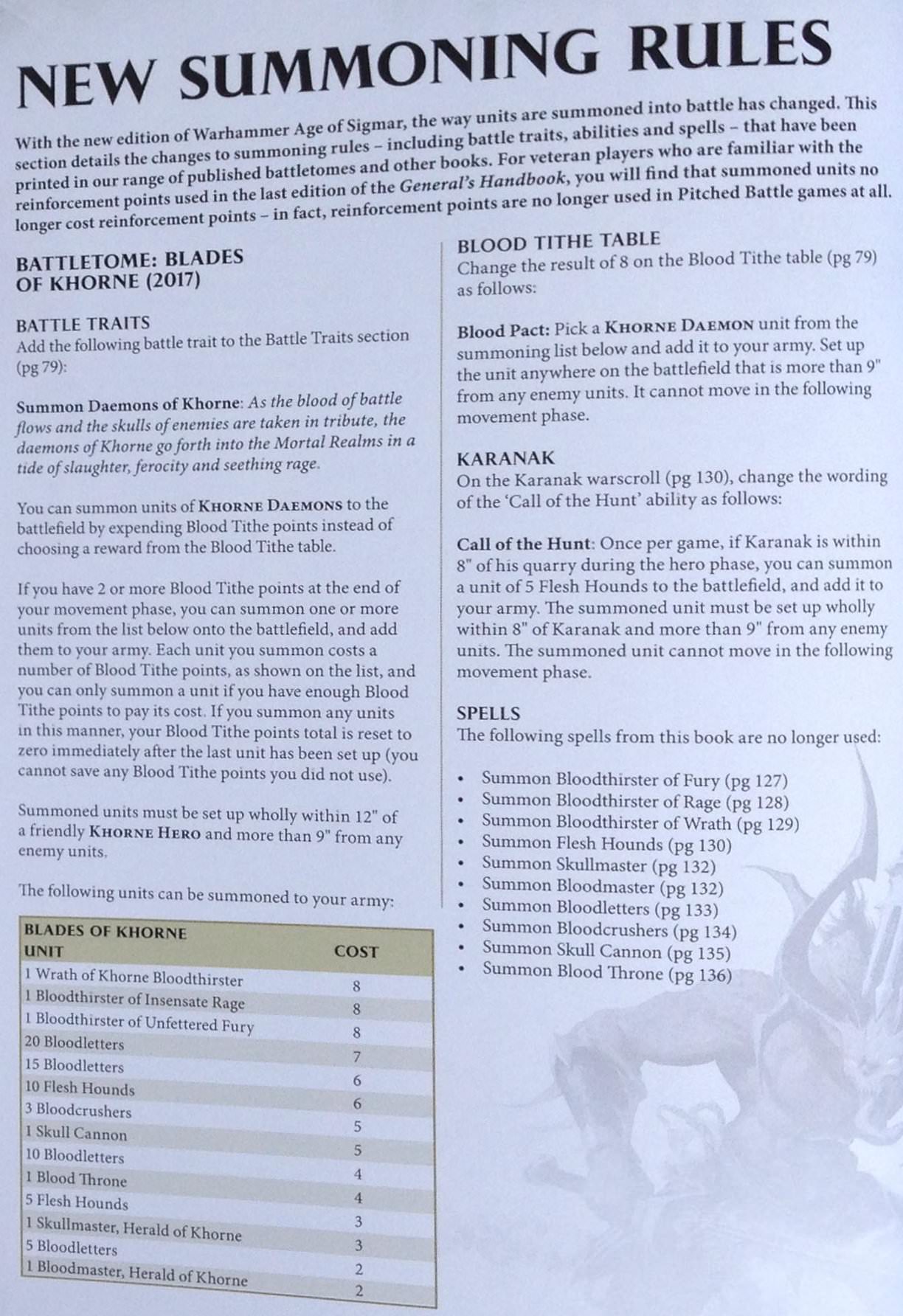 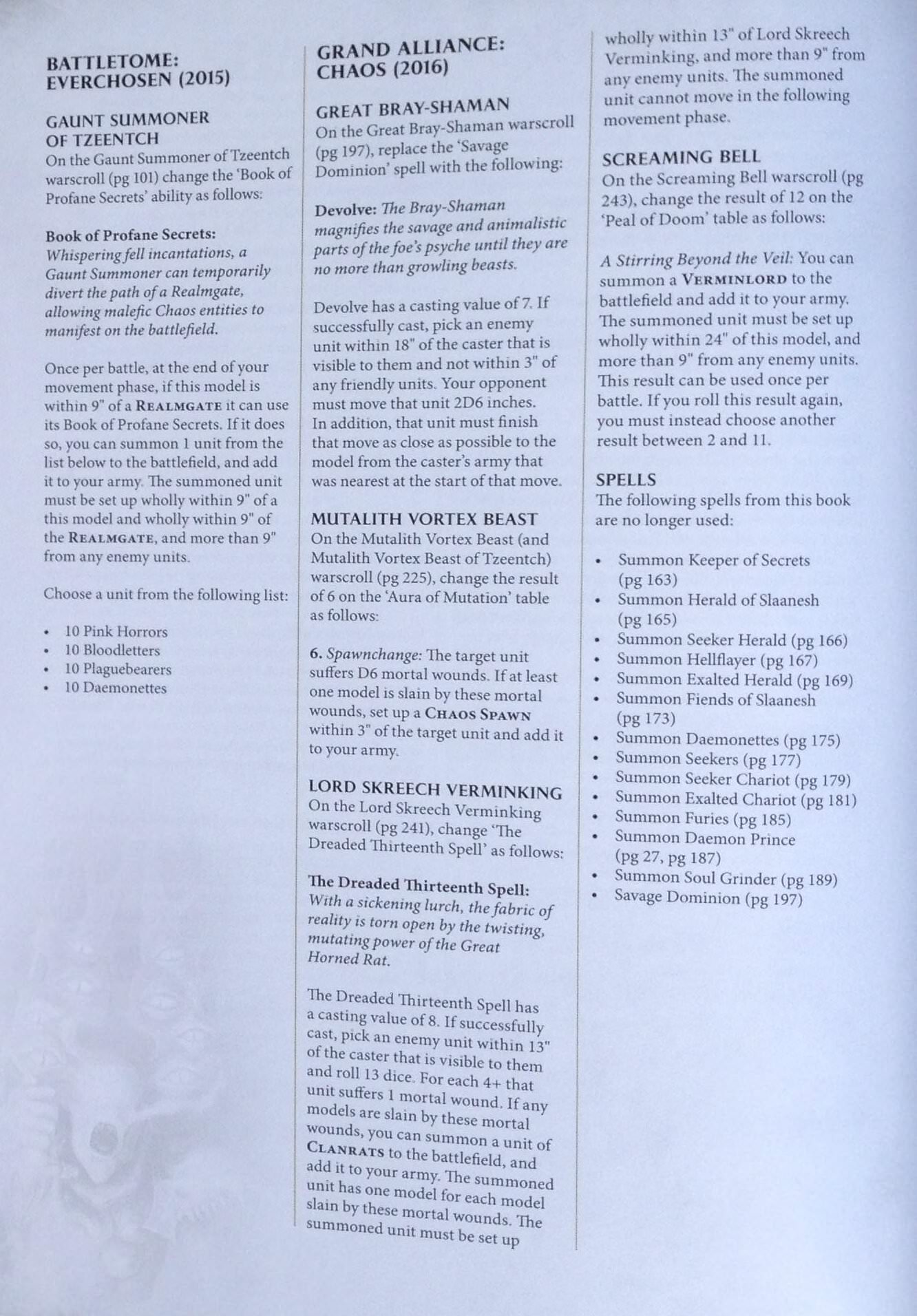 RANT
Again Beastmen lost something :/ the summon beast spell was removed completely and replaced by a whip like spell. Not sure the spell worth it with the speed of the herd but could be usefull to extend the threat range of minotaure or Dragon. Baaahhhhh Anyway i am playing Nighthaunt now !

13 Scenery warscrolls that allow to play the vast range produced by GW without problem.
Resolve some problems from the older version. Everything is neat now and include the obstacle rules from the core rules. 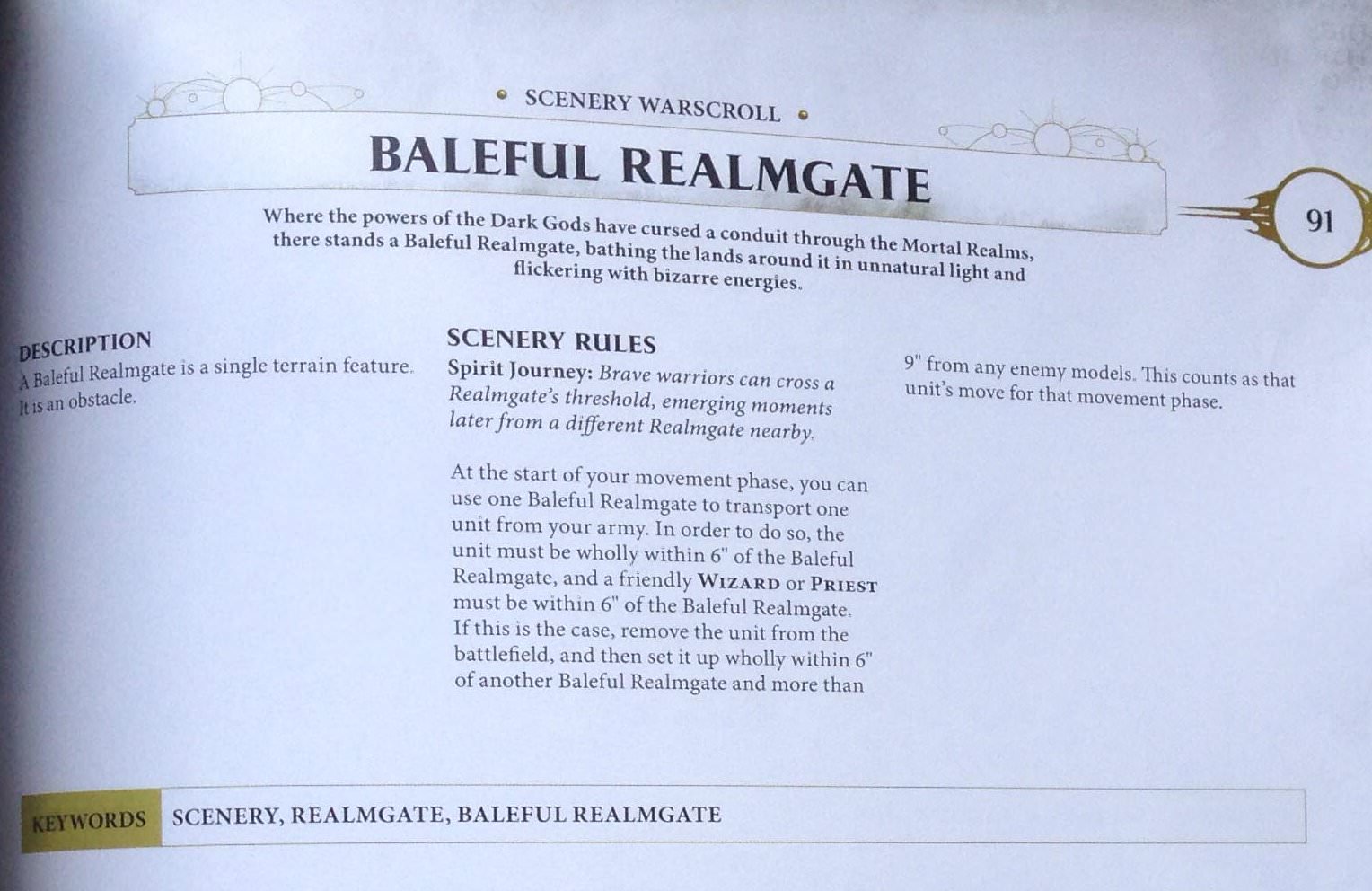 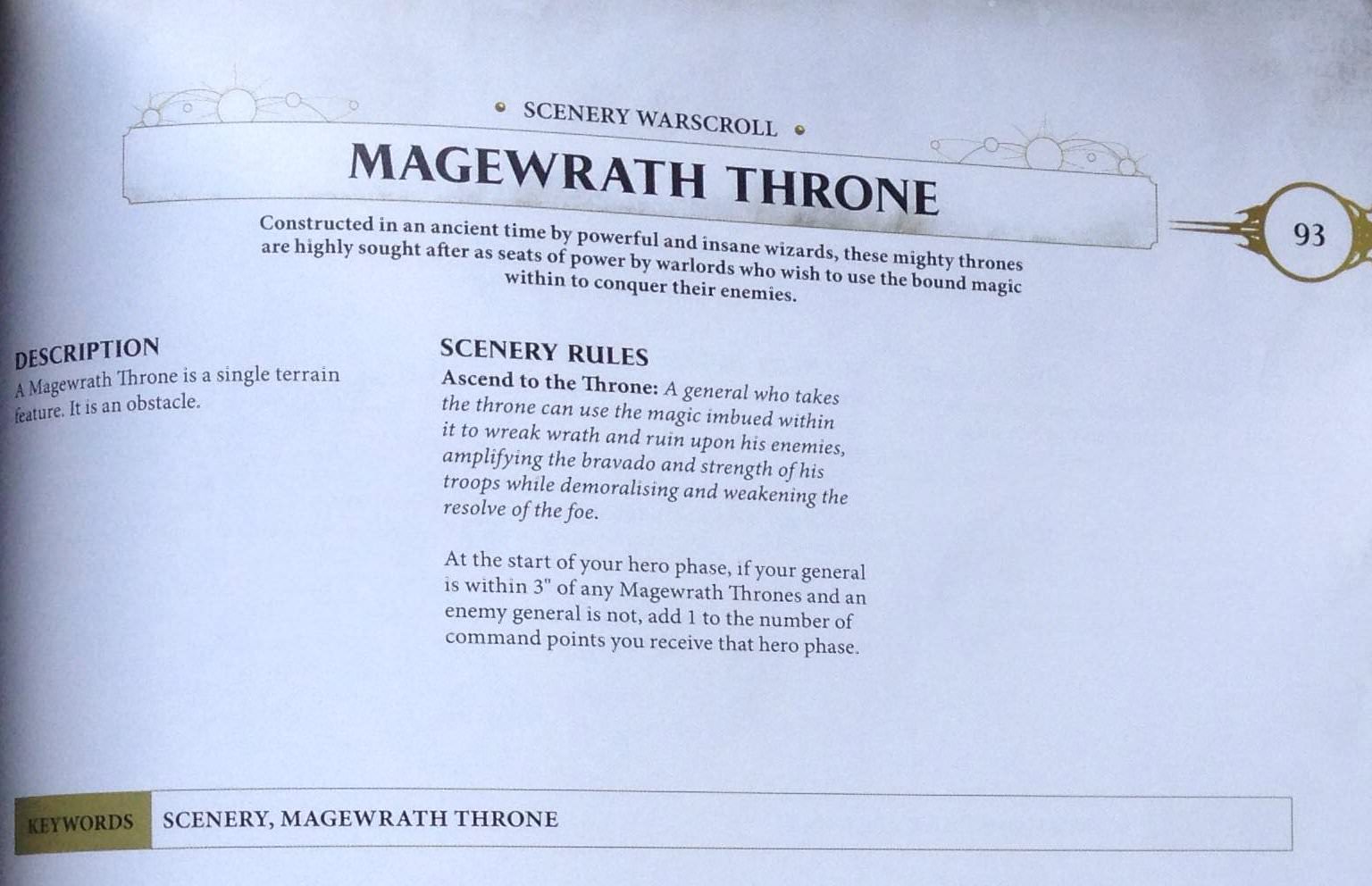 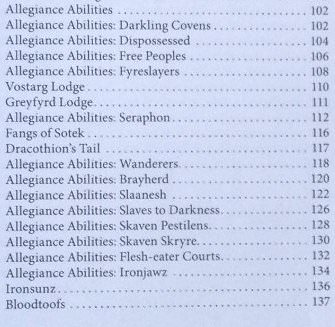 Gh2018 is a good Year !
Including scenery rules and apocalypse is a really good move.

On the bad side, not having all the Battleplans in the book is bad. Same has not having the Grand alliance.
The more i think about it, the more i find the rules spread too much. Again you also need the big Core if you want the rules for endless spells (general rules i mean as, how to dispel, who get the control the spell...).

Ok that's it for now
If you have questions ask them i'll try to respond without angering the inquisition !! :D