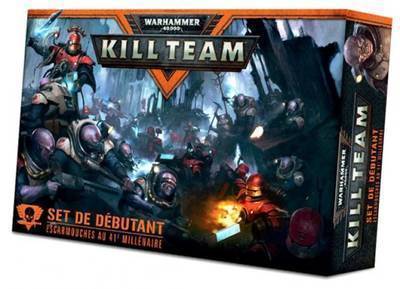 Kill Team is on pre order tomorrow and GW sent us a starter Pack last week.
The box is Super Heavy !!! with 2 squads (Mechanicus and Cult) lots of scenery, cards, Board and a massive rulebook(softcover), it's a very good deal and allow you to start playing right away.
In this review i'd like to focus on the kill team mechanism. There is a lot to say about them as it's an interesting hybrid of classical GW games and alternated activation gameplay !

The kill Team Rules are new, this is not an adaptation of 40k or Necromunda, it's a totally brand new game.
Still Kill Team use big sections of the 40k rules. This review will follow the 6 rules chapters representing the 6 phases of the game : Initiative, move, psy, shooting, melee, morale.


Each player Roll 2D6 the higher roll is first. Note that you can't choose to go second if you win the roll.

Movement phase is the first real phase of the game. There is a lot going on there. To be honest this phase is kind of weird, all shooting/fighting happen in alternated activation. But the Movement phase is not like that. If you have the initiative, you move all your models first ,then, the other player move all his models. To add to the weirdness, charges and reactions happens also during this phase. It result in a very busy part of the game, with a lot of little rules. 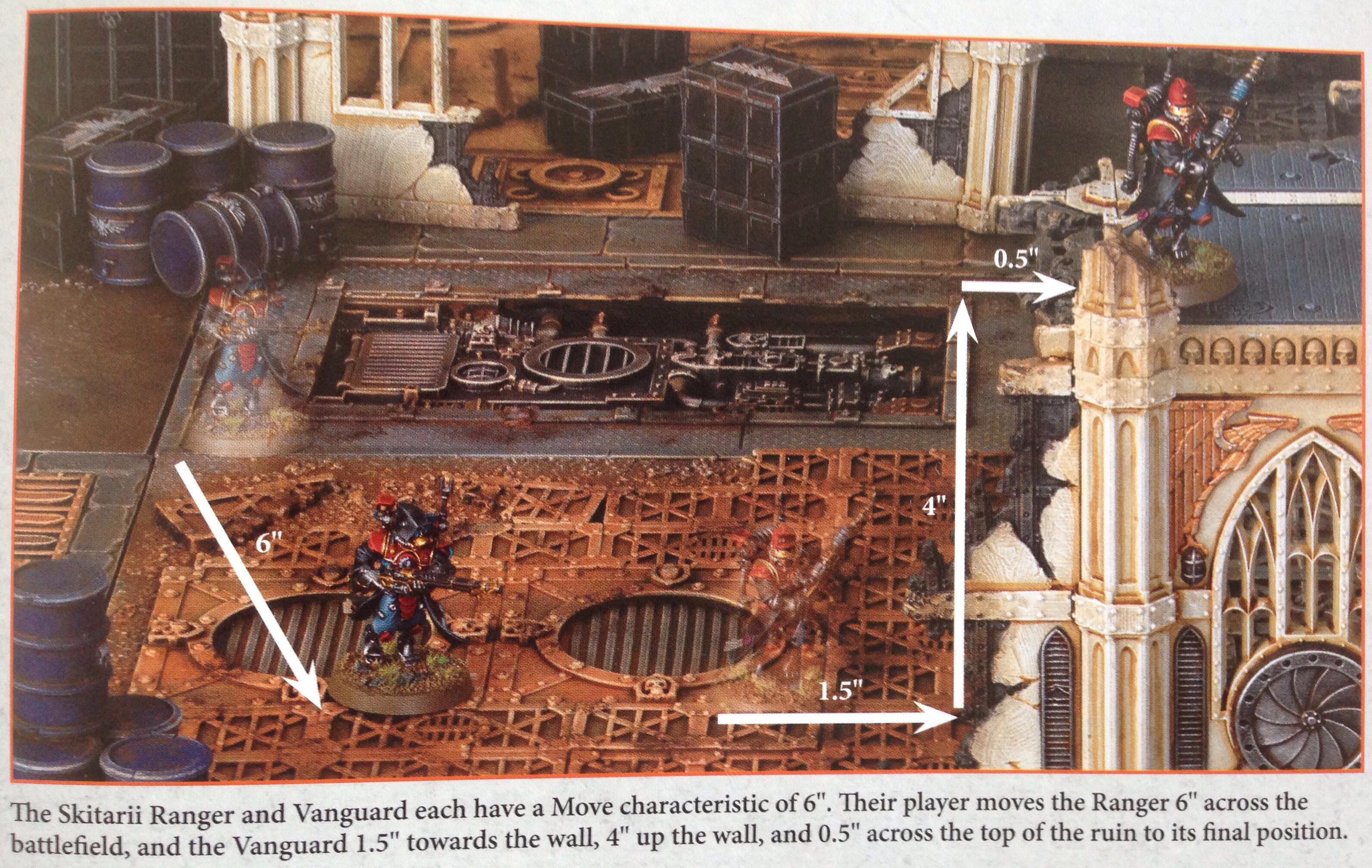 This is a simple example of movement, as you can see there is no special rules for going up. You just measure the vertical distance and move.

-If you fly you ignore vertical distance.
-If you walk over a terrain no higher than 1.5" and no longer than 1.5" you ignore it.
-can't move closer than 1" from an enemy.
Once you have moved, you place a move token next your model (it's very important.)

If you start a move within 1" of an enemy model you must fall back (you can decide to not move of course). Note you can't fallback if you were charged this turn. But the model could have reacted to the charge and retreated (more on this in the charge reaction part)

Use of tokens The game use a large numbers of tokens that are vital to the game. When you fall back, you place the corresponding token next to your model. This way you remember that you cannot advance, charge, be rdy (more on this later) or shoot this turn

If you don't move a model during your movement phase you can ready it. A rdy model shoot first in the shooting phase. If more than one models are ready they take turn shooting starting with the player having the initiative. If you ready a model place a tokens next to it.

Charge works like in 40k : choose one or more targets in 12" (you don't need LOS). Target can react, and then you move the distance rolled on 2 dices. If you get in 1" of the target, the charge is a success.
Don't forget that in KT you do all your charge and then the adversary do the same,

Note : You can't shoot in melee, so a charging models is "safe" until the fight phase.
Note 2 : Charge are successful when you get within 1" of the target.

KT allow 2 reactions against a charge.

Overwatch : hit on 6+ happen before the move.
Retreat : 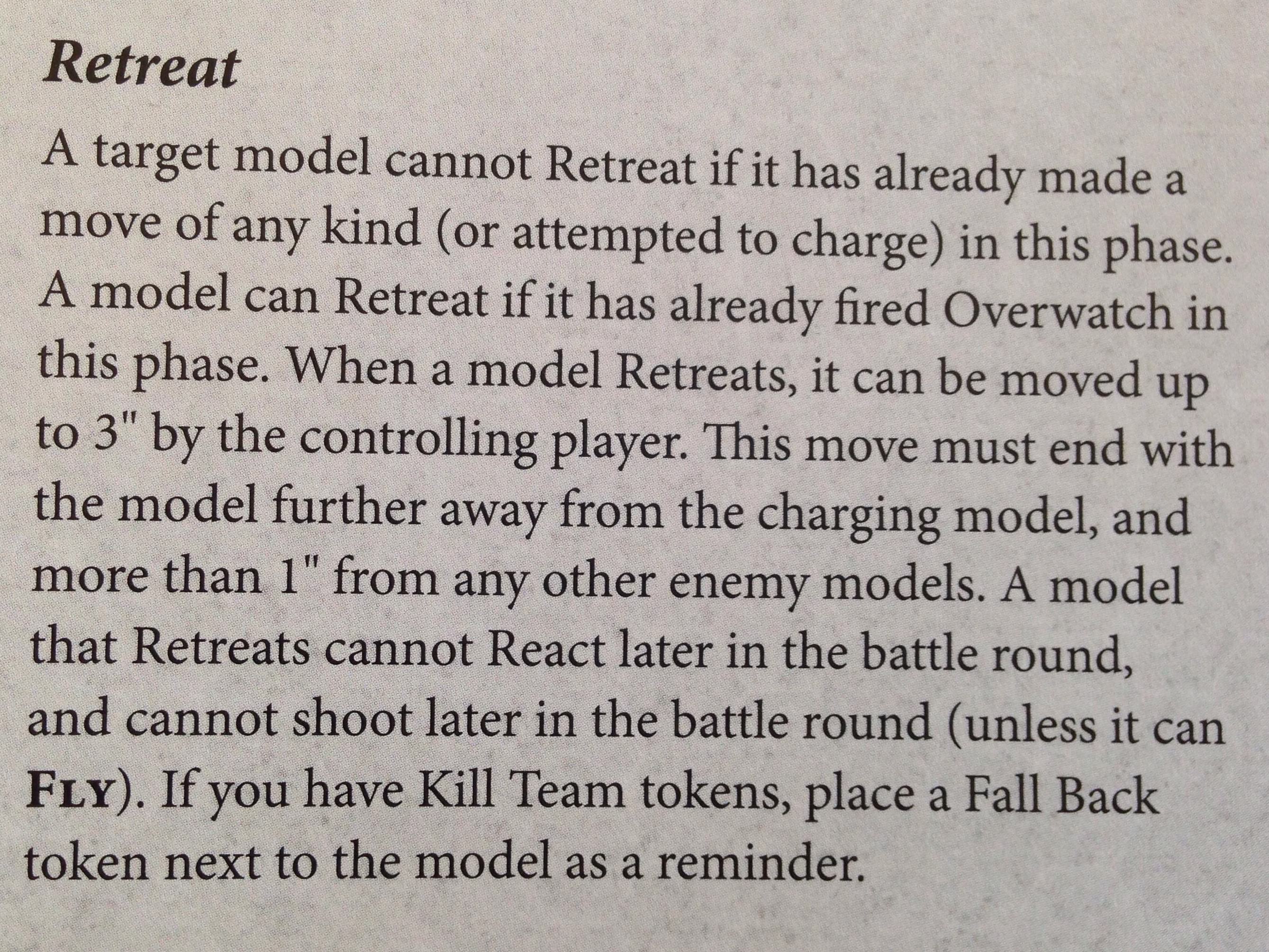 Retreat is a new form of reaction. There a lot of conditions and consequences of using it but it add a lot of depth to the game. It's like Fall Back but against charge and only if you didn't moved yet this turn.
This rule reward smart placement because you force your opponent to declare charge against nearby models in case you retreat behind them, allowing them to overwatch too.
note : Place a Fall Back token next to the model that did a retreat.

There are a few extra rules that you can use once you are familiarized with the game. Difficult terrain, Dangerous terrain, Climbing, Barriers, Gaps, Leaping, Falling damage, Jumping down.

Nothing really complicated here but add a little extra fun to the game !

Closing of the Move Phase

Don't worry i am not going to spend as much time on other phase than on the move phase. Psychic, Shooting and melee are simple, you take turn shooting or fighting. But the move phase deserve some closing words.

1) You need tokens to play this games. You can use token from the box, self made or bought online but you need them.

3) There are "Tons" of tricks and depth in the move phase ,depending if you have the initiative, terrains, weapons. The first game is going to feel bad, but trust me after a few turns you will discover a whole new game of mind tricks, hiding, retreats !!! We only played 3 games and the difference was huge !!

It's like i said in introduction, the game is "Hybrid"

Activate 1 psycher per player and per battle round.

Shooting phase is in alternate activation ("I go you go").
There is a sub phase for ready models that shoot before non-rdy models.

Shooting is hard as you often get :
-1 to hit from target in cover
-1 if more than half range.

Once the initiation game is over you can forget about shooting without malus.

You can split your shots between multiple targets in 2" of each others but before rolling any attacks.

Weapons type are the same as in 40k but you can use only one grenade per turn.

You are not forced to shoot the closest visible target like in necromunda.

Exactly like 40k. But there is no cover save

Injury roll is a specific mechanism for Kill Team. Once a model is reduced to 0 wound you must make a Injury roll. Any future wounds will also force an injury roll.

+1 to the roll for each flesh wounds the victim already have.
-1 to the rolls if you are 1" from a cover or a friendly model.

That mean that the first time a model in cover get shot down 1-4 is a flesh wound and 5-6 is out of action.


If a multi damage weapons reduce a model to 0 wounds, make multiple injury rolls and keep the higher result.

Everything is like a 40k fight phase. Charging models fight first, then non charging fight.

The only difference are the modifiers :
-1 to hit if there is intervening terrain (terrain preventing you from getting base to base)
-1 per flesh wounds
-1 if kill team is broken.

Nothing more to say on this, it's business as usual ^^


Each model with a flesh wound roll 1 DICE against LD, if you roll more than ld you can't act until next turn and place a shaken token.
If the squad is broken all your models roll for shaken each turn ^^.

This roll is modified by :

This conclude my review of the core rules. Kill Team is a brand new take on the skirmish gameplay in GW. It's super interesting and the game is a lot better when you play it than when you read the rules. At first i was a bit puzzled by some rules and was in a WTF mind set when we started the first game. After 2 hours i liked the game a lot more, i can't wait coming back from holy day to play more games of KT.

And maybe start a Campaign !!