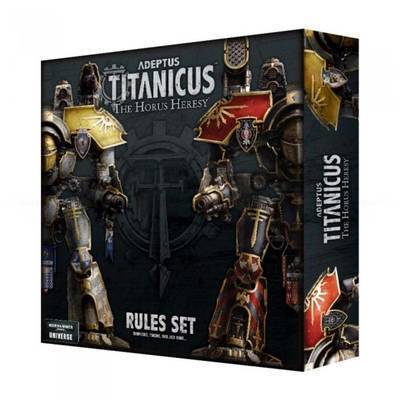 First thing first what is Titanicus ?

Adeptus Titanicus is a brand-new game based around combat between Battle Titans, the mightiest war machines in the Imperium of Man. It’s set during the Horus Heresy, where brother battles brother for the fate of Mankind – and it’s coming your way this weekend.

In Adeptus Titanicus, you are the Princeps Seniores of a Titan maniple, taking control of a number of war engines and interfacing with your models via unique Command Terminals. The game is designed to make you feel like the commander, issuing orders and directing your God-Machines to grind down the enemy, popping void shields and damaging their systems before making a definitive killing blow.

It's important to precise that Titanicus is a brand new game / range. It's not a self contained boxed game. I mean you can expect a lot of release and future extension if the game perform well.

Adeptus Titanicus uses a system of alternating activations across distinct Movement, Combat, Damage Control and Stratagem phases. That mean that in each phase you are going to activate one model/unit and then your adversary is going to do the same. The best way to talk about the rule is to follow the different phases and see what's inside.

Rules are made by FW and are inspired by the old 40k/HH. Expect AE deviation, Flamer template, and a bunch of table rolls. They feel old school directly out of the eighties !

In Titanicus there is 5 Phases : Strategy , Mov, Repair, Combat , End.

Apart from the Repair phase it's a very classical GW turn ^^

Ps : When I was reading the rules 2 weeks ago, I was disappointed that phase were still so much present. I mean come on if we are using Alternate activation do we really need phase ?

In the Basic rules, you just roll the initiative here. (Roll 1D, winner choose).
It's kind of important because if you choose to be first player you get to shoot first or move first (or charge first). But If you go second, you will be the last to move and to issue an Order, that can be super strong if you keep the movement of your Warhound last to flank a Warlord !!

In the Advanced rules you can use Order. These, grant you more option at a cost.
ex : You can shoot 1 weapon in the movement phase but can't turn or move.
Or you can repair right now, but can't attack if you move.
Apart from the introductory battle you should always use orders as they add a lot of depth to the game.
To use an Order you roll a D10 vs your command stat (knight are at 6 warlord at 3) If you fail you can't use anymore order this turn.

The order phase is quite fun and don't take too much time so it's good.

In the move phase each player take to turn to move 1 model or unit, so the more you delay important move, the better. If you are the second player you can hide a warhound by running into cover and break LOS at last activation.

While the phase is really interesting and allow a lot of strategy there are a few problem with the measurements.

-Titans can turn 45° a certain number of time during his move (depending on his manœuvre stat)
-Titans can move in their front arc at normal speed.
-Titans can sidestep or back pedal at a 2 for 1 ratio.
-Front arc is 90° from the base using their weird widget.
We use oval shaped base !!!! 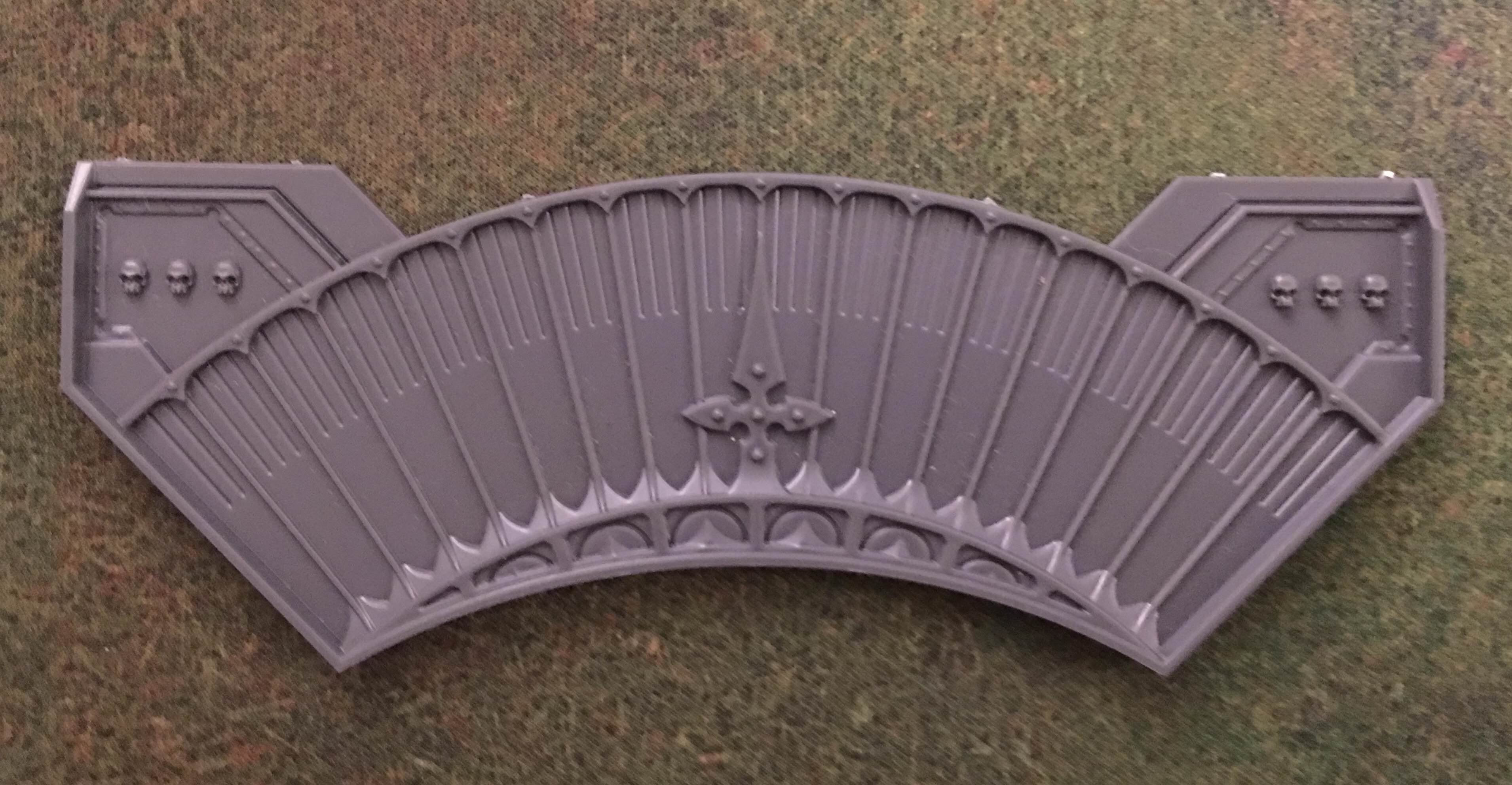 So for accurate play you need to mark your front center and back center on the base. And then 45° right and left for front and back. Finally on extreme left and right you mark center of the base to get a 45° accurate marking on a non round base ^^ 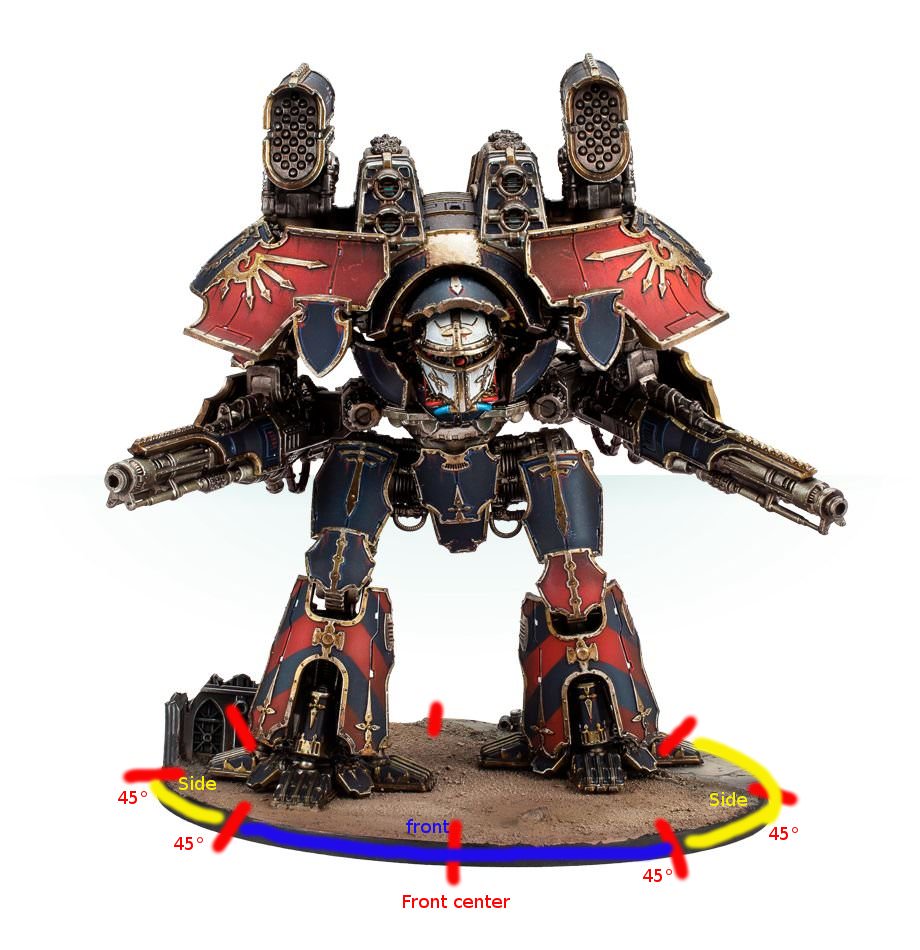 I know the game is not aimed at new player and I am used to mark base from Warmachine but ho god !! Titanicus angle marking is un intuitive to say the least ^^
I would have preferred pre-marked base (with small 3d line) or round base.

If you look at a titan control panel you see 2 number in movement and maneuver.
The first one is the default value, the second cost 1 rank of heat. (it's more complex in the advanced rules but it add nothing to the game ^^)
Once the Engine is in red or Orange bad shit happen (you roll dice and hope for the best or get destroyed like a fireball). 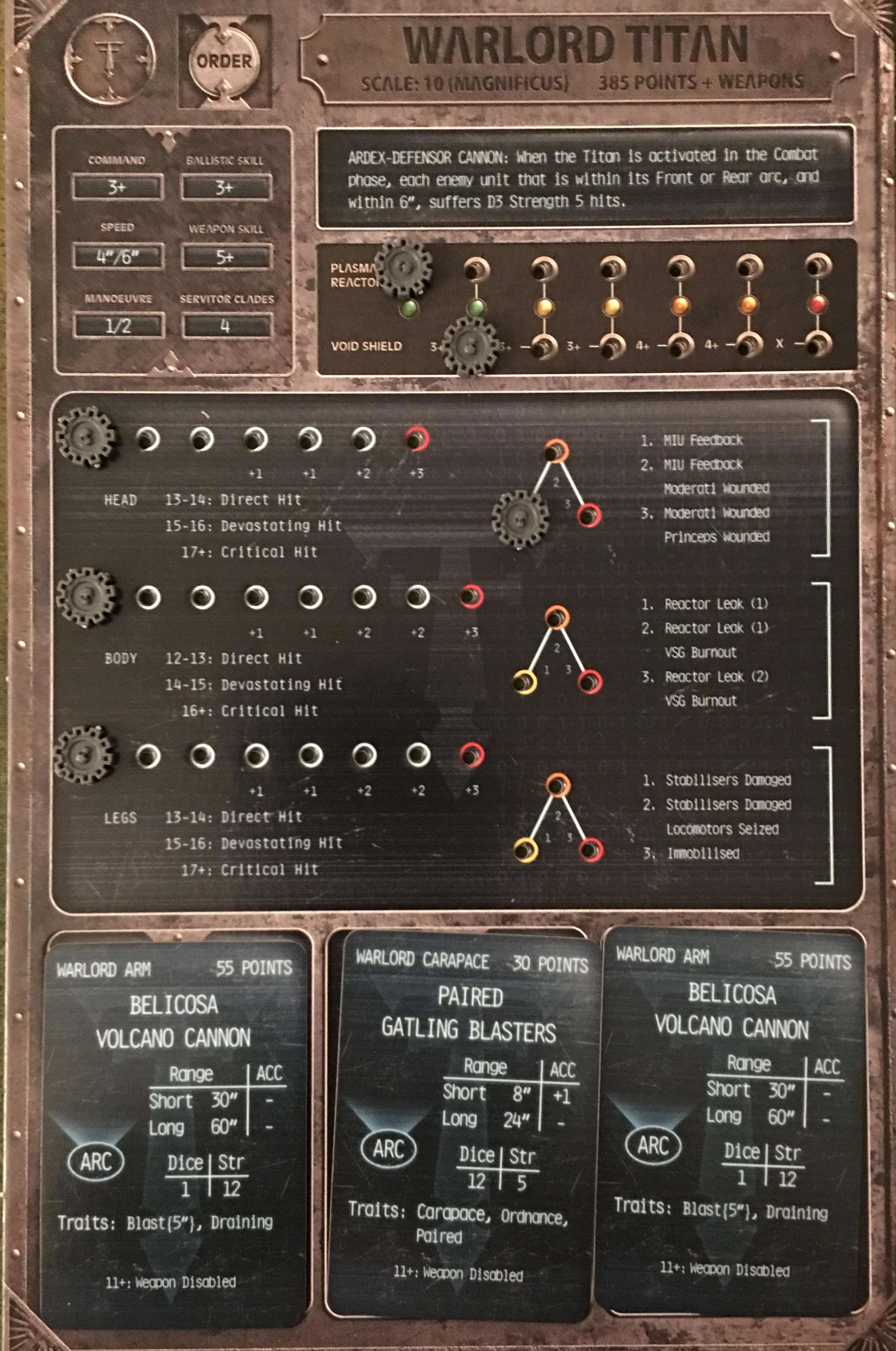 I love the movement phase of titanicus, it's really interesting to try to bait the opponent. Also the difference in speed and agility is really well represented.

Roll X dice representing your manpower inside the titan. If you get : a 4+ you restore engine, 5+ restore shield and critical, 6+ Restart downed shield.

Nothing super interesting here you roll dice and try to restore some stuff on your Titan.

Note : You roll dice before allocating the effect.

You take turn activating one model/unit. Once activated you can shoot at 1 target with as much weapon you want. If you used the split fire order you can target multiple enemy.

The rule is not very well written in the book. In a nutshell :

Shields always deflect shots !! For each shot deflected you roll a 1d6 to see if you loose a shield level. Once shield level is 0 you can go to wound rolls on your next weapon attack.

If you hit and the target don't have shield up you roll a localization (all shot from the same weapon hit the same spot).

You can do a called shot (with -2) to choose the localization (it's good for finishin a wounded Titan).

For each hit you do a weapon strength+1d6 vs armor value. Depending on the result you do 1dmg, 2 dmg or 2 dmg + a critical.

You get bonus for attacking the side or back (+1 / +2) and some incremental bonus if you attack an already damaged zone.

Crits give malus to the titan (minus to hit, speed, random turn, weapons offline).

Destroying a titan is a long process and only the 4th critical hit on a single localization make you roll on the “Catastrophic damage” table. Then you got a good chance to make the titan explode, 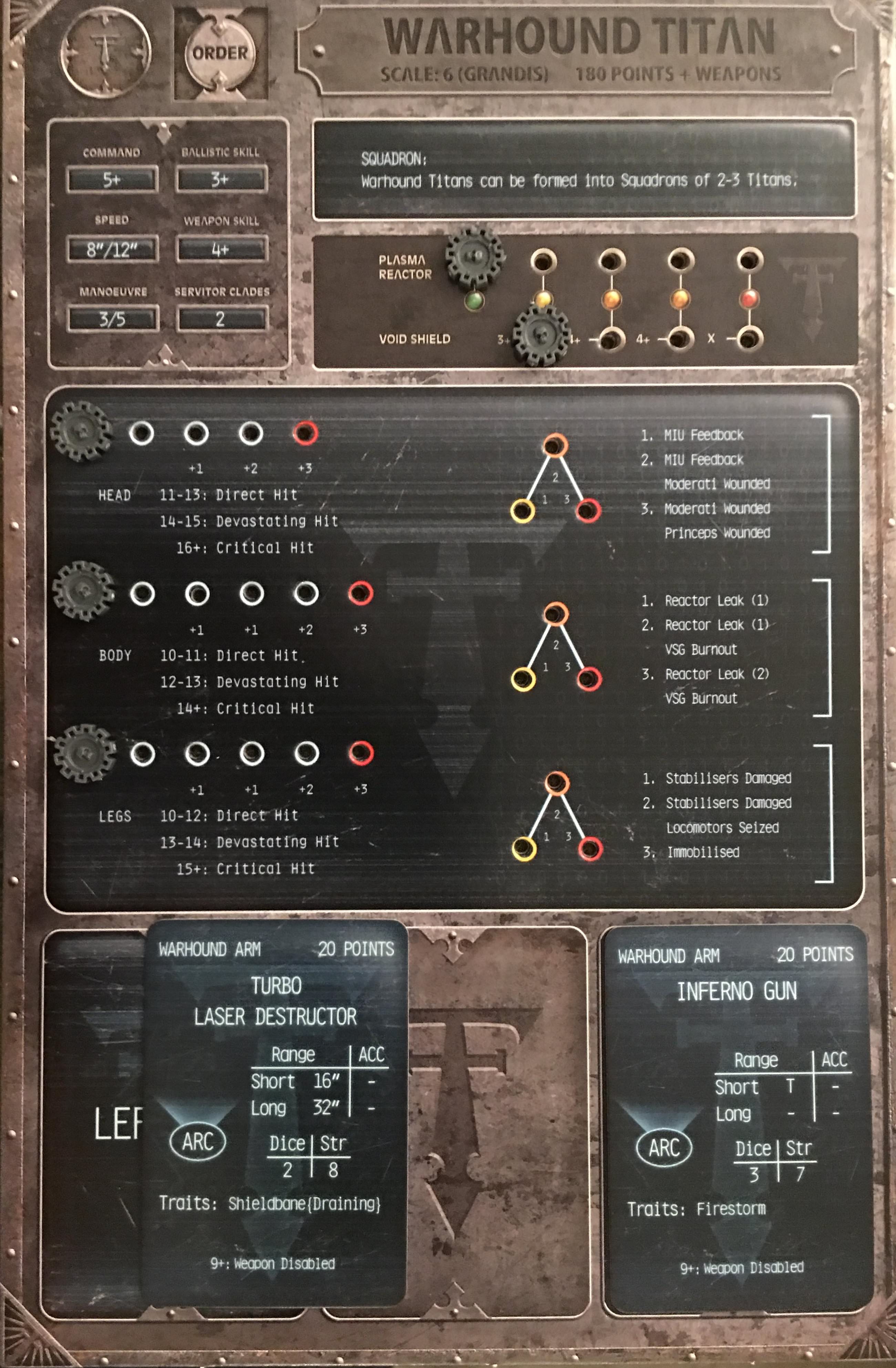 Combat phase in a nutshell

I'll be blunt but there are too much rolls in this phase, it's kind of long to shoot each other. After a few turn when the titan are close to the end you get the excitement but when you start attacking an untouched titan it feel like a grind. (And it should be, I know ^^)

It's a bit of a let down because the movement phase is fun and very strategic (once you have marked 45° on everything) .

We played 1,5 full game with custom made base and proxy. But the center of the game is pretty much : Shoot with dakka to bring the shield down then shoot with powa to do critical dmg. Or rush in with a fast titan/IK to shoot from inside the shields.

Some unimportant stuff happen in the end phase but don't forget it !

Titanicus is the start of something grand and new. I really hope the game become popular because I love stompy robots game a lot !!!

There are a lot of possibilities to this game : the different Maniple formation, the assets, the house rules , the weapons, the knights, the scenery.

I am quite hyped by the light maniple formation with 5 Warhound and 1 Reaver ! (each time a Warhound down a enemy shield the Reaver can shoot ^^). The different weapons load-outs are going to be really fun to test with this one.

The order are great too and I didn't talked much about it but IK charge are devastating !! even on a Warlord Titan :D

Finally with the official terrain i m sure it's going to smooth game play a lot !!!

I am sure the game is going to work, I know the prices are not great for now and the faction choice are limited but it's just the start and I want to be optimistic on this one !

See you on the Battlefield.