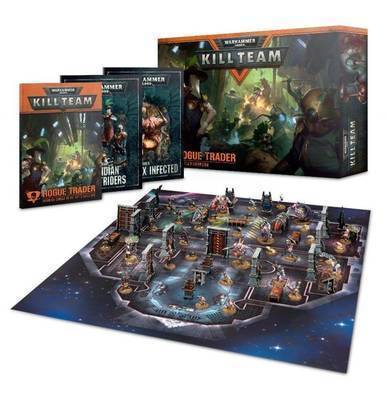 RT goes on Pre Order today, and here is the product description by gw :

Please note: Rogue Trader is an expansion for Warhammer 40,000: Kill Team, and requires a copy of the Core Rules. These can be found separately either as a standalone softback book, or as part of the feature-packed Kill Team boxed set, both available from games-workshop.com.

Rogue Trader Elucia Vhane and her Starstriders seek to colonise new worlds at the behest of the Imperium’s mightiest leader. Their quest aims to travel far beyond the Chaos contamination that threatens to engulf Mankind. Yet nowhere is safe, for the twisted tendrils of corruption have followed them even beyond the borders of the Imperium. Can the Rogue Trader and the deadly specialists she has forged into a team defeat the hulking Vulgar Thrice-Cursed and his virulent band of mutated followers? Can the cutting edge of human skill match the loathsome gifts granted by the Dark Gods?

Kill Team: Rogue Trader is an expansion for Warhammer 40,000: Kill Team, the fast-paced tabletop miniatures game pitting small bands of elite specialists against each other in vicious skirmish combat. This set adds 2 new factions, new environments, new missions and a host of new rules, allowing you to recreate desperate battles beyond the borders of known space. Inside the packed box:

A 56-page book filled with background and rules for the Elucidian Starstriders and Gellerpox Infected – as well as new advanced rules for all Kill Team factions – the Rogue Trader book contains:

- To Roam the Void: an introduction to the Rogue Traders – warriors, explorers, leaders and merchants who bear a sacred Warrant of Trade, allowing them to engage in both commerce and war beyond the boundaries of the Imperium;
- A Growing Sickness: the insidious threat of Chaos grows stronger with every passing moment – this section explains the dangers of mutation, and the fear it instills in the Imperium;
- To Reach For Paradise: a description of the summons sent by Roboute Guilliman himself to hundreds of Rogue Traders, asking for their help as equals in discovering new, untainted worlds on which to dwell. This focuses on Elucia Vhane and her crew aboard the New Dawn, their discovery of uncorrupted worlds for the Imperium to settle, and their unwitting introduction of the Gellerpox Virus to these worlds;
- An annotated map of the Truehawk – Elucia Vhane’s shuttle – and the Ministorum Shrine, site of the terrible final battle against Vulgar Thrice-Cursed; these maps cover the included gameboard.

- Ultra-Close Confines: rules for combat in the narrow corridors of spacecraft, the confined spaces of hives, or anywhere that necessitates brutal, close-quarters fighting with little space to move. This includes rules for movement. resolving visibility behind walls, opening and closing doors, and 2 Tactics for use when fighting aboard the Truehawk or at the Ministorum Shrine;
- Killzone: The Truehawk: an annotated map showing how to set up the gameboard for skirmishes aboard this shuttle, with a table of 6 special environment rules;
- Killzone: Ministorium Shrine: an annotated map showing how to set up the gameboard for skirmishes within the dust-ridden confines of the Shrine, with a table of 6 special environment rules;
- Commanders: sometimes kill teams will be led by a great hero, a high-ranking officer or the warlord of a whole army – this section contains special rules for fielding a kill team led by a Commander, complete with their own Tactics and Traits;
- Rules for fielding the included miniatures: datasheets for each, with Commander Traits, Upgrades and Tactics for Elucia Vhane and Vulgrar Thrice-Cursed, 6 specific Tactics for each kill team, rules for their weapons both ranged and melee, and points values for each;
- Specific Specialists for the included kill teams: Strategist (for the Elucidian Starstriders) and Strength (for the Gellerpox Infected);
- 4 Narrative Play and 4 Matched Play Missions based around the struggle between these 2 kill teams, with a set of ideas for your own Open Play Missions (and 3 pre-generated missions to start you off);
- Advanced Rules: this section covers a historical campaign using the content included in the box, and shows you how to combine the Ministorum Shrine with another Kill Team gameboard to create a much larger Killzone.

- Background and details on the origins of Rogue Traders, and the retinues they employ while traversing the void;
- A profile of each unit included in the box, featuring background information;
- 5 Datasheets, 8 unique Stratagems, 2 Abilities, a Warlord Trait and Matched Play points values allowing you to field the included miniatures in games of Warhammer 40,000;
- A showcase of painted miniatures and battle scenes on terrain.

- Background and details on the Gellerpox Infected and the daemonic disease that corrupts their flesh;
- A profile of each unit included in the box, featuring background information;
- 7 Datasheets, 8 unique Stratagems, 2 Abilities, a Warlord Trait and Matched Play points values allowing you to field the included miniatures in games of Warhammer 40,000;
- A showcase of painted miniatures and battle scenes on terrain.

Also included is the 16-page Warhammer 40,000 Core Rules, explaining everything you need to play to play Warhammer 40,000. Moving, shooting, using psychic powers, charging, fighting and morale tests are covered, giving you the basic framework to play with.

Each of the following 10 miniatures is supplied on pre-coloured red plastic:

Each of the following 23 miniatures is supplied on pre-coloured green plastic:

A selection of plastic scenery is included:

As well as this, you’ll find a double-sided gameboard, featuring the layout of the Truehawk on one side and the Ministorum shrine on the other. This measures 22”x30”, exactly the same as the board found in Kill Team – with which this board can be combined to create a large play area that can accommodate up to 4-player games! Also included are 2 sets of punched card tokens representing various in-game statuses – 1 set for the Starstriders and 1 set for the Infected. 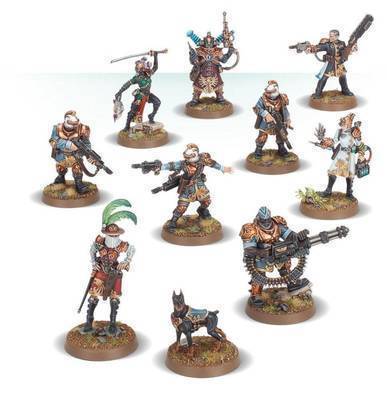 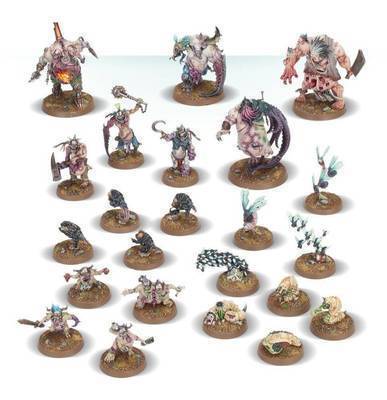 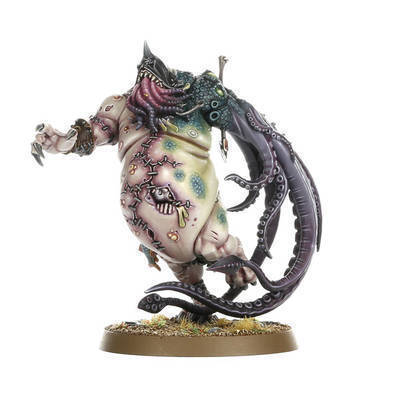