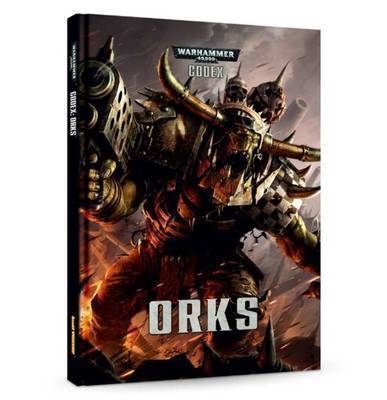 There are 64 pages of Fluff that's the biggest orcs ever had.
-Lot of info on Ghazghkull Thraka that connect him to the Great rift event.
-The Thraka Quest. He's looking for something different than Armageddon,
-Big section on orcs physiology and whay of life. 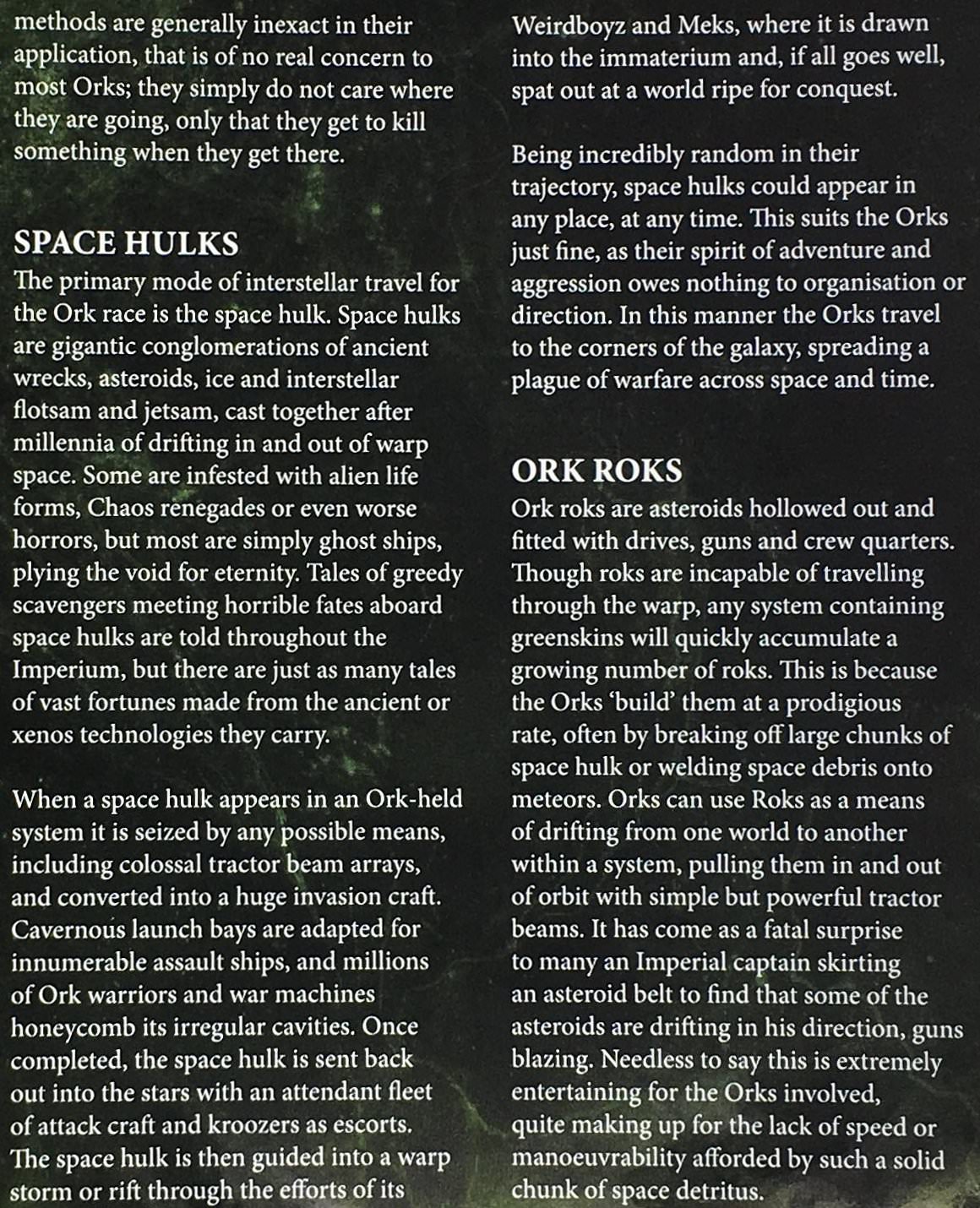 -Some info on their origins. They have stuff encoded in their DNA. This allow them to retain a weird high level of technologies 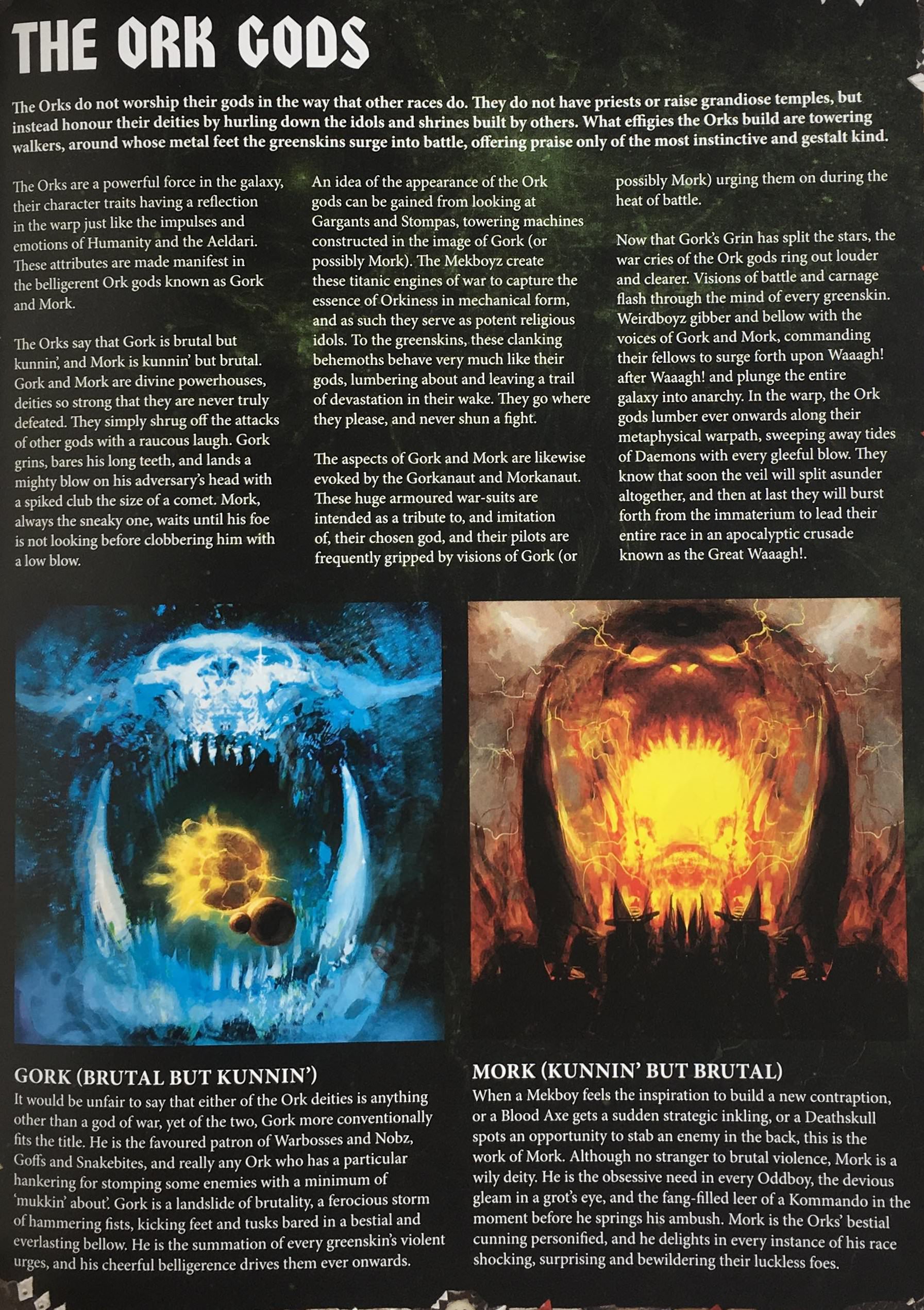 All orcs army get some special rules :

-Keyword : Some units have don't have the Keyword ''clan'' like freebooters and Named Characters.

-Ere we go : Reroll any or all of the dice on a charge roll. This is incredebly powerfull as you can reach very far if you can keep one of the dice. Most of the units have access to this rule.

Mob rules : Replace LD with number of your unit or by one unit within 6”. Really help if you have 2 big units close they are nearly immune to morale test.

Speed mob : Buggies only they get an extra 6” mov.

That's already a lot of rules helping the orcs.

All Kultur were already spoiled by GW so I just share the page for reference. 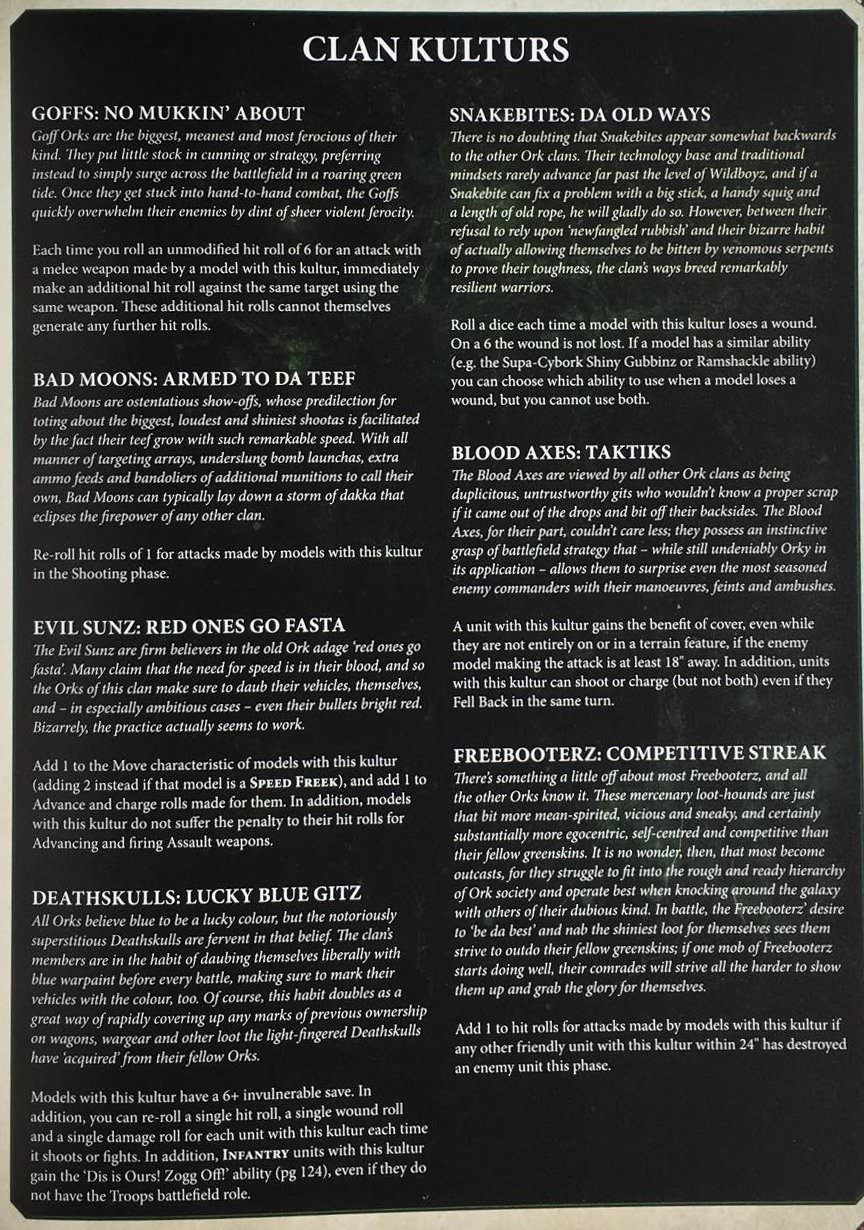 Few of my favorites

-Green tide : Allow to respawn a boys unit that was under half strength( 3cp)
-The Bad moon stratagem, allow to shoot a second time (infantry only)
-Grot shield, it's a 2+fnp but you have to sac a gretchin if it works. (1cp and super strong)
-Telyporta : Deep strike one unit with a Power of 20 or lesss . Work with a transport + unit.
-Fight a second time with a unit (3cp)
-Orcs is never beaten : fight before dying. (2cp) 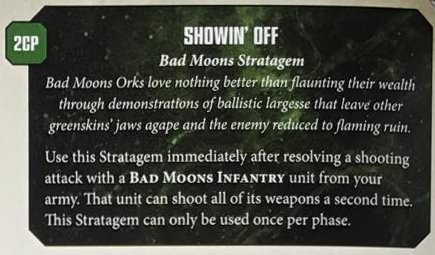 If you had to keep 1 psy power it would be :

Da Jump : teleport infantry within 12” unit 9'' from the enemy, count as moved for heavy weapon.
That mean you can teleport a Tankbusta unit and take out an enemy vehicle (ever more guaranteed if you are a bad moon !)

This is the relic you must take ! 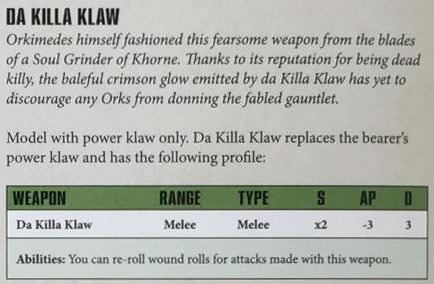 So that mean that your warlord could be hitting 7 times 2+ 2+ Ap3 D3 (with trait and psychic power) charge something super big (move + run + charge with charge reroll) destroy it, Fight a second time if you get chance (3cp) and if you die you can fight a third time (2cp)^^ Funny ^^

Now that the general stuff is behind us let's take a quick look at the different units of the codex.

The Waagh HR is well staffed !! let's look at our options :

GT have the same waaaagh rule as other boss (allow orcs infantry units within 6” to run and charge) but he grant one extra attacks to charging units within 6” of him (when they are chose to fight.).
He also have an aura that grant auto pass morale within 6” vs 1d3 mw on the units.

Only problem is that he's Goff clan and kind of expensive .

Its a weaker GT with lower stats, lower range on Morale aura and no extra attacks on charge aura.
But costing no more than 5 marines and 2 more marines for the equipment.
Even if you have Ghazghkull Thraka you can still use a boss as a relay for Waaaaaaagh rules.

-Can repair stuff, shoot with an AP 5 gun and have a small chance to generate MW.
-He's kind of expensive (a bit less than 90pt) for a BS 5+

More expensive but with a 5++ againt shooting for units wholly within 9” or can grant it to a vehicle if embarked. (I am not sure you can embark and still grant the 9” bubble)

Infiltrate, Melee beast against soft target, get a bonus to wound inside cover and a 3+ from cover save. Nothing crazy.

Very good model. Got the Character trait to stay protected from shooting. Grant the Waaaaagh rules for Biker and Vehicules for obscene turn 1 charge ^^

BS 4+ , 1 reroll each turn with plasma gun with 1 , have reroll 1 aura for Flash gitz.
Have freebooters Keywords instead of Clan but can still be added to any clan or freebooters army.

Only 2 choice here ^^ Boys or Gretchin.

Same as before ! They have a +1 to hit if more than 20 (melee and ranged).
Grot blasta is still range 12 pistol S3. But hit on 3+ if you take a large pack.
Still super usefull with the grot shield stratagem.

Downgraded version of Mad Dok but still grant the 6+ Fnp.

Burna in melee is AP-2
They are ok, You can run shoot and then charge.
You can include 1 spanner every 5 Burna the come equiped with a Kustom Mega Blasta.

They reroll miss against Vehicle.
Every 5 you get 2 squig suicide bomber (range 18”, 2+, s8, Ap 2 , D6) 10points.
I Really like them, you can pack them in a Battlewagon with a Power Shield Mek and once in 18” you unleash the Squig !
Note : With a stratagem allowing you to shoot twice it's serious dakka

Still Big, mean, with a lots of weapons options.
Nothing specials.

Lots of Dakka, lots of attacks 3 W per guys.
Perfect with the Deep strike stratagem and the Charge reroll from Ere we go.

Scary nobs on Scary threat range.
Having The Boss on the Trike allowing them to run and charge is a must ^^

Now that speed Freeks is out, there are geat choice here !

-Only 23 points and you can move , run, shoot and charge with the Trike Boss. That's a lot of value.
I love them and want to use them. (still 6 shots per bike)

My favourite, Anti tank weapons hitting on 3+ in orcs team, teleport for a bit less than 110.
And look so damn good.

Not a big fan of this one but against horde army they are fun ^^.
Less than 100 points.

The Model is awesome.
Dakka is not that great but hit on 4+
The mines are good. 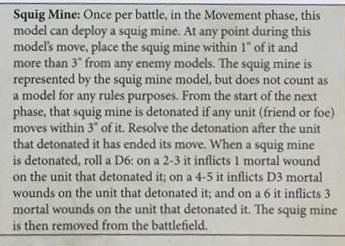 Ps : Once deployed they all act as independent model

16 wounds can carry 20 models and open topped to be used as a mobile weapon platform by an tankbusta unit ^^. Even Better with a forcefield.

It's a battle wagon with an Ard case and Kannon. The only difference is the Periscope rule that grant a second shot with the main weapon of move under half speed.

Beastly in melee, Benefit from the Mechanised whaag for a run + charge. (And they have the Ere we go rule as well.)

Both are similar, but
Morkanaut can buy the forcefield and Gorkanaut need to transport a Big Mek to get the 5+
Gorkanaut have 6 Attacks.

Again with Ere we go they get Good threat range even more if the Trike can make them run and charge. Because a Gorkanaut hit hard ^^

Deffgun are still Heavy D3 S7 Ap1 D2.
Nothing much changed but you roll once for all the phase, in a turn you roll max number of shot you can use a stratagem to shoot a second time for up to 90 Deffgun shot^^
They are good fire support considering they don't cost much more than a SM

Still BS 4+, each snazzgun shot 3 time with S6 Ap2 D2, range is only 24” and the weapon is heavy.
They also cost twice the price of a space marines.

Note : The don't benefit from Orc Kultur unless you are playing a FreeBooters army.

ransport 12 models, open topped, 10W.
Have chance to reduce incoming damage.
Still a good weapon platform for Embarked Tankhunter ^^
At the price of 5 space marines it's a bit expensive.

Orcs have 4 flyers let see how the codex treat them :

Less dakka than the Dakkajet but same stats

Less dakka than the Burna Bommer but same stats
The Bomb is better roll up to 12 dice MW on 4+ and roll 3 dice on monster and vehicule.

The Same stats as all other flyers.
Multiple Bling Weapons (Smasha gun, Wazboom Mega kanon).
Not a big fan of the smasha gun (48”, Ap4, D1d6, roll 2d6 to wound add them and must roll equal or greater) but I am sure it could have his use.

Only one choice here but what a choice !!!

You know sometime an image is better than a thousand words : 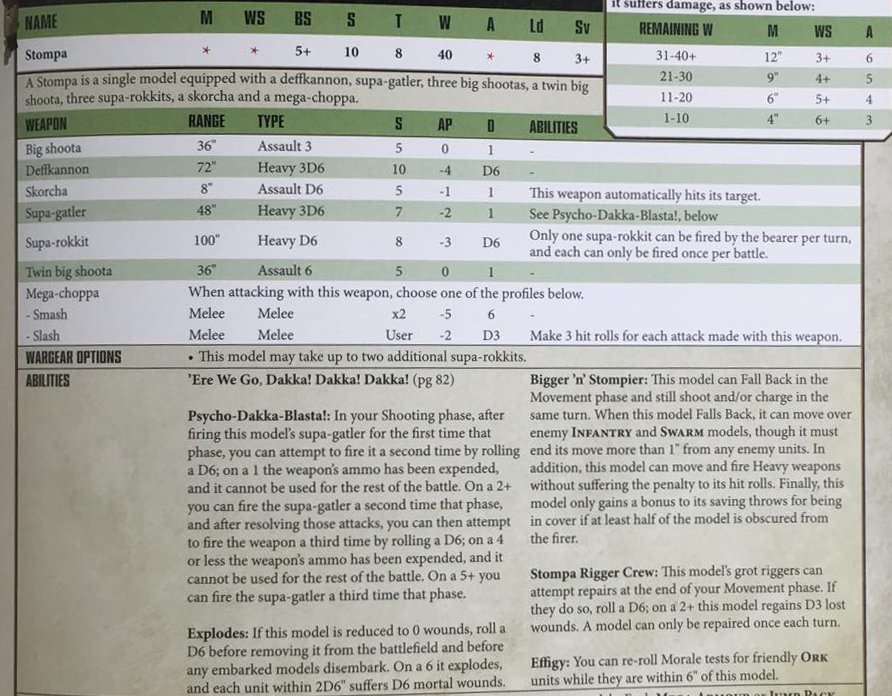 Ok that's it for the re unit review. but let's not forget about the Mek Workshop ! 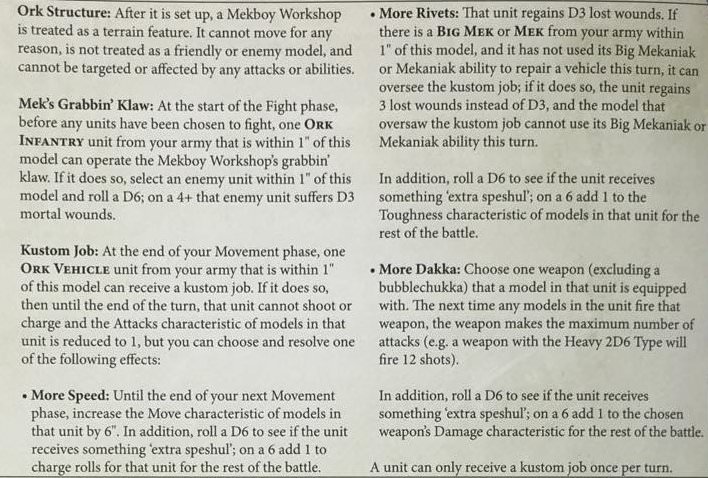 This is a rich codex ! There are so many options and so many playstyles.
You can go full shooting, full melee, full speed or mix any of them. Most of the choice are good.
The new Trike warboss fill the boss biker shoes even if he's not as strong in close combat.
This is surely the best Orc codex ever !!!

Sorry, I wanted to do something more concise but the numbers of options and entries were so important that I couldn't keep it from growing.