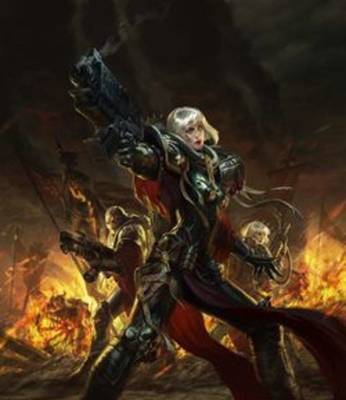 Review of the Sister codex from the CA 2018

This beta codex is included in the Chapter Approved 2018 Edition.
32 pages with fluff, artwork,stratagem, trait, relics and chapter tactics.
They kept the Faith point system even if the point generation is different.

the good news is : 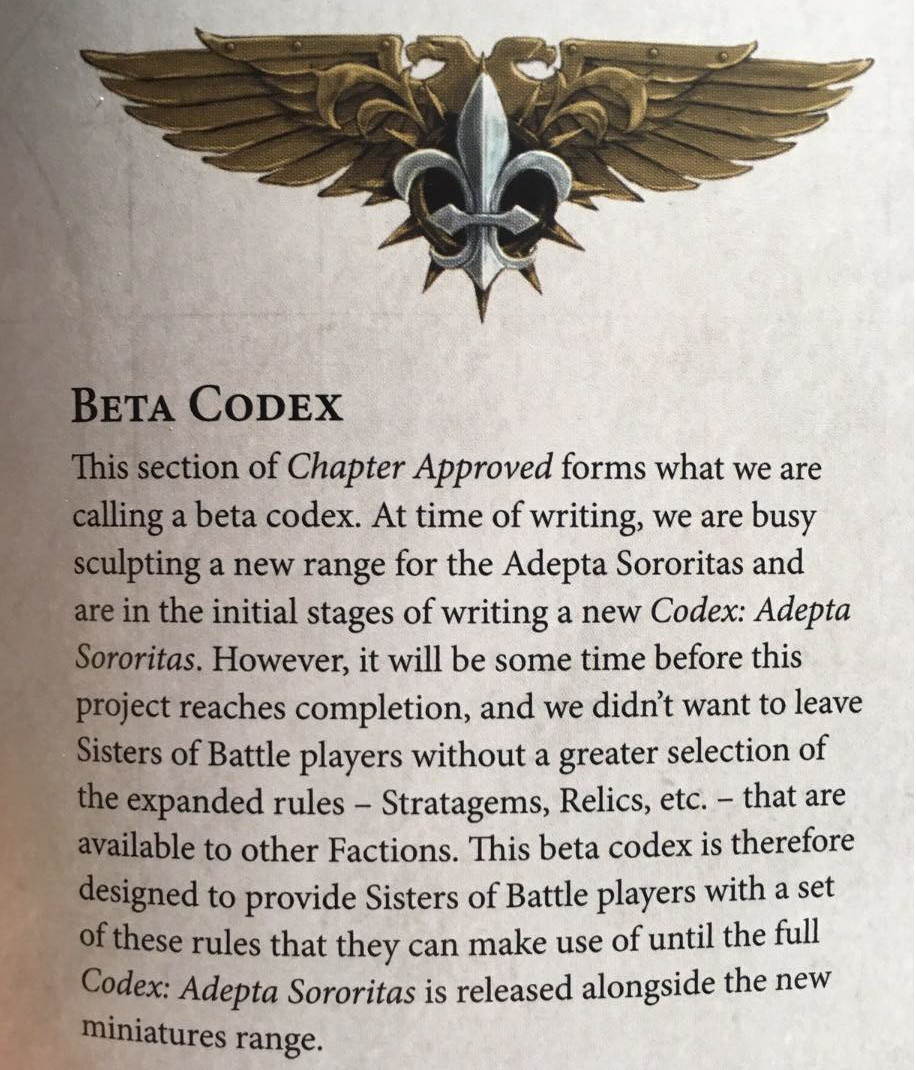 -Can't say too much but it could be the biggest release eveeeeer ! (or as big as the Primaris release)
-I have been told that new range is exciting and not limited to concept already existing.

All sisters but Celestine and her 2 bodyguards have keywords for the chapter trait.

Models with this rule get a 6+ Invul save against melee and range attack and can deny the witch but with only 1d6 (trash unless you have Brazier of eternal flame).
There are 2 way to improve this 6+ with an Aura

Note : both power are "unit within" and not models or unit wholly within. Also celestine and

-One stratagem (1cp) improved the Shield of faith by +1 to one unit during one battle round (once per battle :/)
-Seraphim Squad get +1 to the shield also

All these max at 3+
Vehicle in SOB army have this rule also. (So Rhine, Exorcist, Immolator)
All priests, Flagellant and penintant don't have this rule.

I don't know if it's super strong or not on T3 models but i am sure there are some hope here.

Act of Faith are used by Sororitas army by :
-Selecting one unit with this rule (every Sororitas but vehicule.)
-paying 1 faith point.
-rolling a dice and scoring more or less than the difficulty.
-Each AOF can be attempted once per battle round

Faith points generation have been changed.
You start with 3 points + 1 for every 10 models with the rules "Act of Faith".
There are multiple alternate way to generate extra like :
-1 stratagem grant 1 Faith vs 1 cp
-1 stratagem grant 1d3 FP when you loose a character (3 if it's your warlord) you can use this one in reaction of the death of your character.
-1 order conviction grant 1 FP when you loose 1 unit.
-1 order convition grant 1Fp on 4+ if you destroy one ennemy unit.
-1 warlord trait grant 1Fp on a 4+ each turn
-1 relic grant a 5+ refund one FP used to cast an Act of faith.

Ps : Models don't have to be in the same unit to count, characters also count.

Casting an act of Faith is simple, select one unit with the rule "Act of faith" , pay 1 point of Faith roll a dice.
If you roll more or equal than the required difficulty it's a success.
Note that All AOF are once per battle round success or not.

3 ways to improve the chance of casting it :
-Simulacrum Imperialis : +1 to roll it's an upgrade to SOB (10pt)
-Dialogus 6" Aura : Reroll AOF.
-Chapter trait granting +1 to AOF rolls.

Hardest to cast is 5 easiest is 3. At best you get a +2 and reroll. I really think the chapter trait is nearly auto include.

Nothing over the top appart from the Double pile in. But off course +1 to shoot combined with the stratagem to affect Other sister in 6" could be super nasty.
Ps : Unit affected by the stratagem vessel of the emperor don't need to have act of faith rule. So in theory you could cast the +1hit Act of faith and AE spread it to multiple Exorcist.

Honestly they is not much to say here. It's still the same stuff as before but 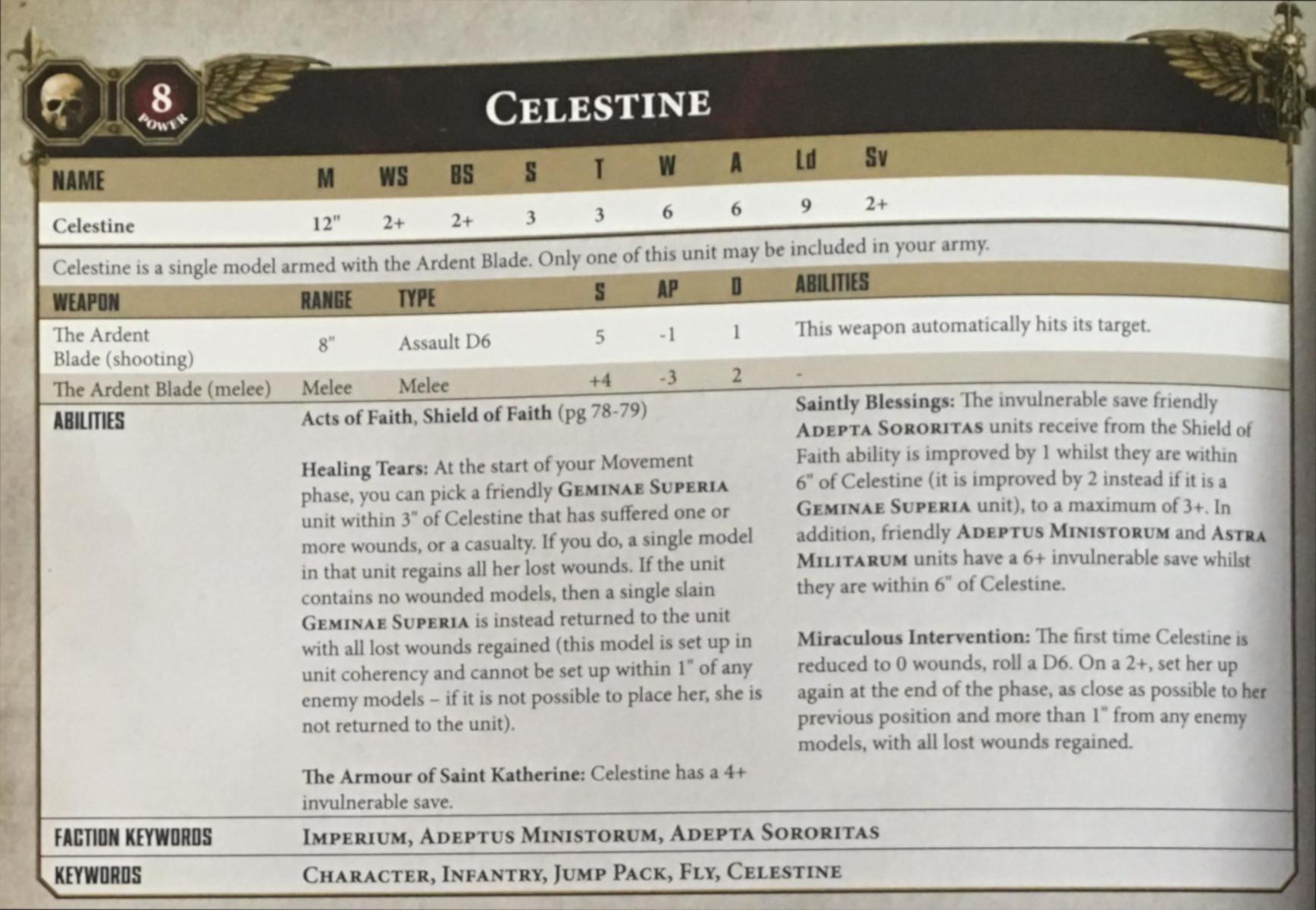 -Geminae : Celestine bodyguard, can take them without her but they now take a slot.
-Repentia : 3+ 3+ fight with an eviscerator (s*2 ap -2 d2) -1 to hit.
-Misstress of repentance : Auto include if you have Repentia, grant them reroll charge, run and hit. Can trigger the 1d3 FP stratagem.
-Celestian squad : Veteran squad gain 1 attack, 1 ld and 3+ 3+. One extra sister can equip a melee weapon and the sarge can equip a pistol. They get a bodyguard rule (2+ transfer a wound from a character)
-Preacher : Aura bot for the +1A in 6"
-Hospitalier : Heal or Rez model.
-Dialogus : reroll AOF within 6, 30 pt is expensive for their stat but you need one or two :/
-Arco Flagellants : still cost the price of a SM, they have 2d3 attack each (3+ s5 -1 D1) . Note : there is a super fluffy stratagem that make each Flagellants attack 6 times each but you have 1/6 chance to die at the end of the phase. (extrimus trigger word !)
-Crusader : 13 pt for a stormshield and a power sword is not bad..but not great. They get AOF and Shield rule but don't have Sororita Keywords...can take a unit of 10, don't take slot if you have a priest and reroll hit on charge/when charged
-Death cult assassin : Reroll hit on charge or when charged. still 4 attacks 3+ s4 -2 d1 attack that reroll on charge for 17pts is ok.

-Seraphim squad : 3+ 3+ dual bolt pistol. 5+ invul from shield of faith, deep strike. can take 2 pair of flamer or fusion pistols. They are kind of good front liner with a shield combo you get them to 3++ can rez 3 per turn, once charged they can desengage move 12" and shoot again.
Note the flamer pistol are 1d6 shot now. +2pts from the sister
-Dominion squad : Normal sister but they can equip 4 flamer/melta/stormbolter. Vanguard = make an extra move at the start of the game and if embarked the vehicule does it. It combo very well with the immolator as you can move 12 before the game, move 12 first turn and shoot your heavy flamer. Kind of nasty against horde army (you do this after disembarking your sister.) +1points from the sister.

-Exorcist : pew pew pew 1d6 missile s8 ap 4 D6 at 48", they have shield of faith but can't cast AOF, so you need to use the AE stratagem to grant the +1hit.
-Retributor squad : Classical dev squad but can take Heavy flamer.
-Penitent Engine : If you can deliver them they will take out the intended target period. each one have 4 3+ s10 ap 3 d3 attack, they fight twice and they reroll on chargeoO. They are still 7w T6 4+ / fnp 5+ but i am not sure that is enough to cross the battlefield. (100pt) 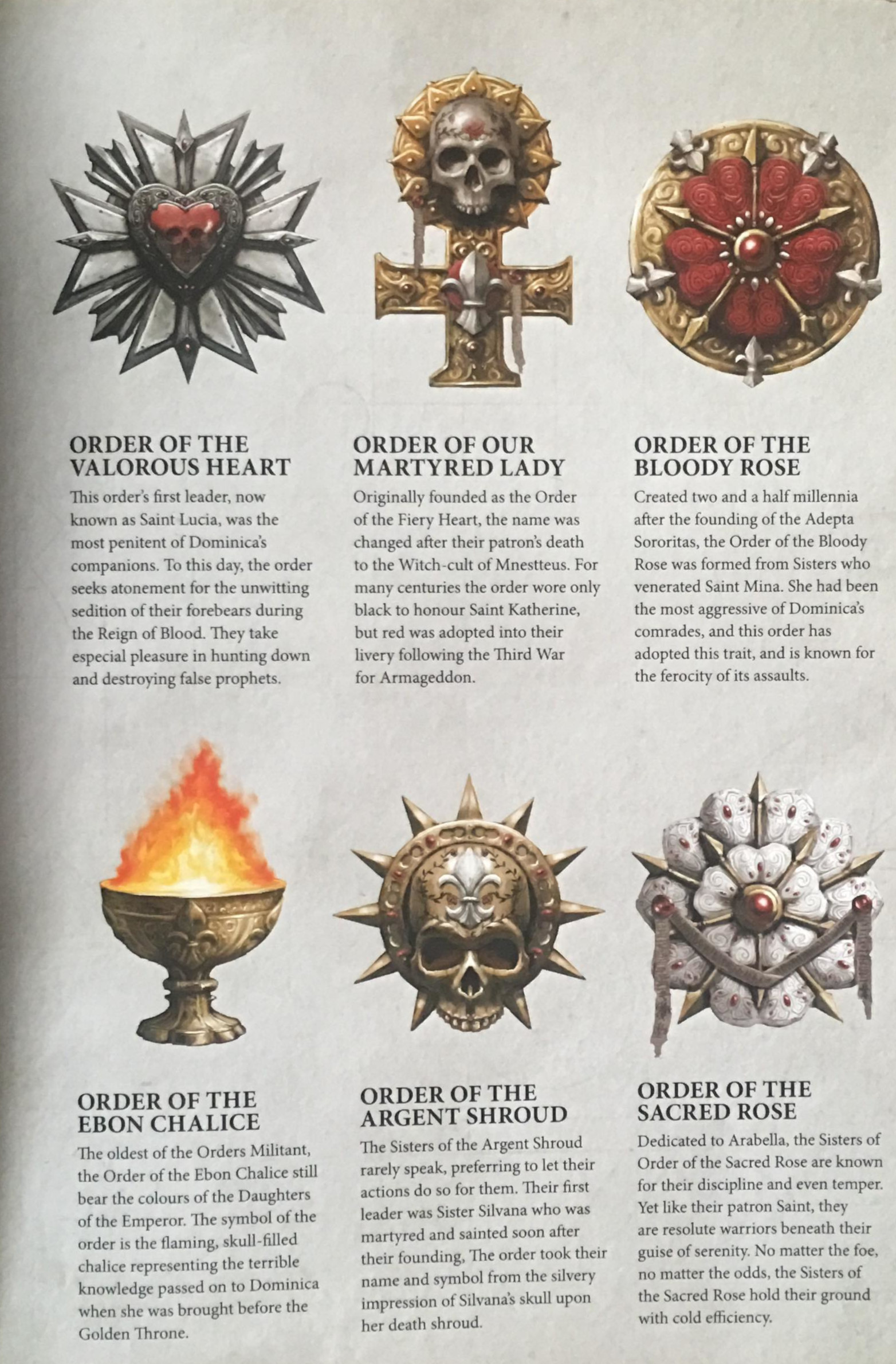 Honestly with the Faith rules like this, i don't think you can pick something other than Ebon Chalice (+1 AOF) sad :(

4 of them are very good :
Vessel of the emperor will : AE act of faith. (3cp)
Sacred rites : gain 1 FP (1cp)
Martyrdom : 1d3 FP when a character die.
Sacred banner of the millitant order (+1 Shield of faith roll for one battle round) Too bad it's only once.

There is only one : Shield of faith is 5+ while within unit is within 6". Between the Celestine, the priest and this aura, it really feel they want you to make a big blob of sister in the middle

- Magic mantle : 3++ for a canoness
-Brazier : Friendly order Deny the witch with 2d6 instead of one while within 6 of the bearer. It's funny when your rhino Deny the witch ^^

And that's is all for the Sororita !
Keep in mind it's a Beta Code while we wait for the sisters release this year !!

This betaDex is interesting but i am not sure i like the intended play style (a big blog of inf/vehicule in the aura range).
The intergration of priest and flagellant still feel artificial and i'd love to see more interaction/combo with the sisters.

I know i am late on the schedule (sorry but computer is stuggling since i updated my linux distr) i chain myself to my computer today and write all the review (next is the 8 , then regenage knight, then new mission, then vigilus fluff, then new formation... )