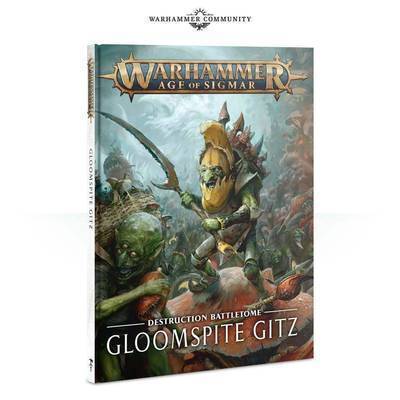 This book has a lot of stuff and we'll be reviewing it this order: Moonclan, Spiders, and Trolls!

This Battletome is 112 pages with hardcover as all Battletome it includes, Fluff, Artworks, Painting and covers a large number of units.
(No FW units).
As usual, you'll be able to select: Traits, relics, Battalion, and differents Battleline units depending on the General. So let's get to it there is a lot to say!

The Allegiance Ability is tied to Gloompspite Keyword and has been already spoiled by GW But I'd like to give extra details.

The moon starts in one corner (your choice) and moves to the opposite corner. Once it reaches it, the Moon is out for the game.
If 2 players are Gitz only one moon is placed (Roll off to choose). The moon grant bonus if you are wholly within the right table quarter or to the whole table. You get no bonus if you are in the corner. 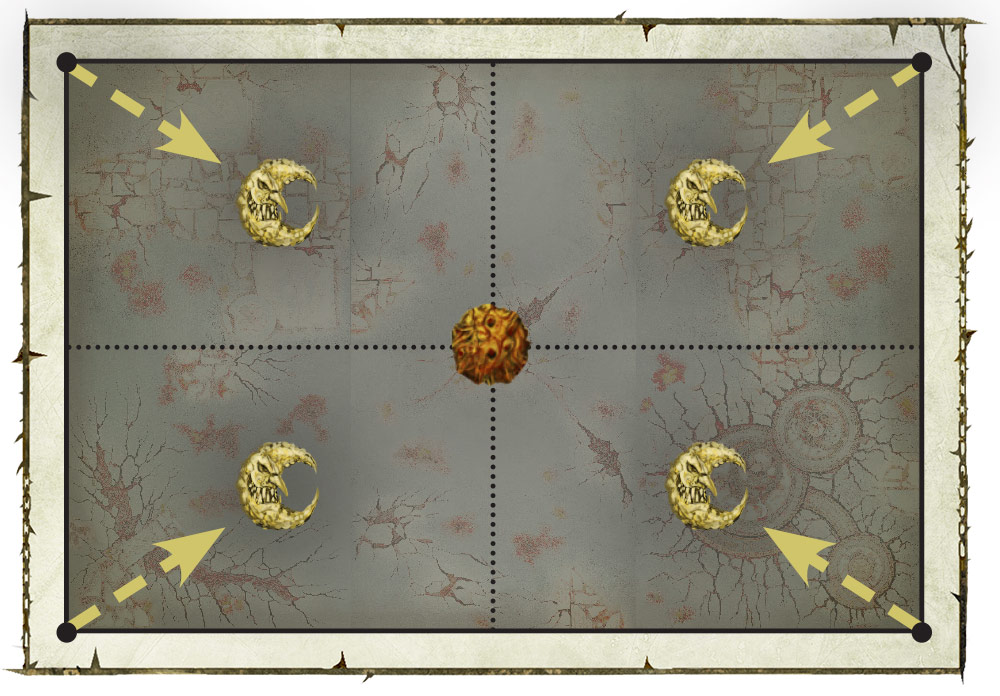 Gloomspite Gitz Wizards under the Bad Moon get +1 to their casting rolls, while all other wizards get -1.

Gloomspite Gitz Generals get an additional command point in each hero phase they’re under the Bad Moon.

Squigs under the Bad Moon can run and charge in the same turn.

Spiderfang Grot units deal mortal wounds on a 5+ to hit, rather than a 6+.

Troggoths can re-roll the dice to see if they regenerate wounds, or double the results of their first roll.

PS: It looks strong on the paper but doesn't count too much on it unless you have the Loon King.

The Moonclan is the main subactions of the book. Even includes another mini faction if you want to play full Squigs (I WANT !). Here some interesting warscrolls :

The Loonking is, of course, the kingpin of the army! His Command abilities grant him a once per game control of the Bad moon to halt it on the center of the table for 2 turns! At a bit more than 200pts, he's good value (decent stats and 2/2 wizards). Also, he benefits from 2 of the moon bonus (extra CP, and +1 spell rolls)

GobbaPalooza
Another interesting choice is the "GobbaPalooza" it's 5 gobs heroes choose as one unit but all actings independently during the game and all have different little powers. (some very good debuff). Leader slots are super tight in a Moonclan army (or spider) and having 5 heroes without using a leader slot is value !

Loon Boss
The standard gob hero is a point of contention in my gaming group ^^, Cost 70 pt :/ shitty stats, 5wounds at 5+, 3 attacks (3+ 3+ -1 1d3). But his command ability looks very promising, Target moon clan grot gets: on an unmodified roll of 6 to wound deal 1 extra mortal wound. Sound great with a huge pack of grot buffed with extra attacks (see after). I imagine at best getting 4 attacks per grot (4+ 4+) and optimistically 30s grot in melee. So 60 hits dealing 10 extra mortal wounds (and a bunch of armor roll for the targets ^^). There is ONE big problem :( the command has to be used at the start of the Melee phase and the target must wholly within 12"(24" if it's the general but it's suicide). it's going to be hard to pull off :/

Sneaky Snufflers A new support units that can add +1 melee attack to one unit. You can stack this buff but target suffers 2d6 MW after the first one ^^. I imagine using stacking it twice on a massive gob unit (where the backline can't reach fight) 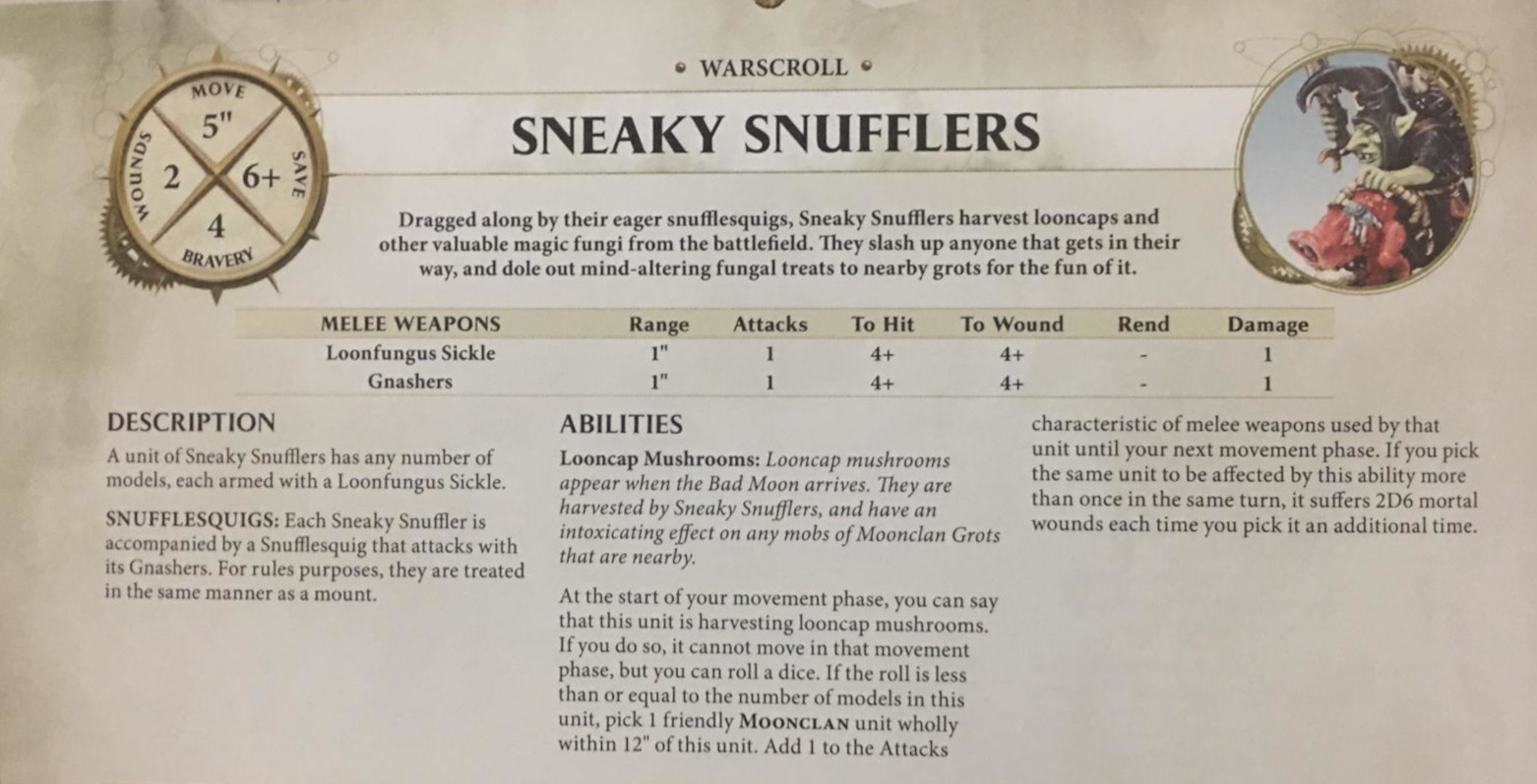 Sporesplatta Fanatics Another good inclusion, it's basically fanatics with mushroom&chain. But grant +1 attack to grot and Block Los (1" aura ). The sad part is that they cost a lot of points (120pt for 5 oO)

Rule of thumb for this battletome, everything but battleline feel overpriced.

Hoppers Bounderz at 100pts for 5 the price is steep (up to 15 models) but I find them very good if you can set them up with the sniffler, the manglers command ability and the moon (that grant run and charge)

MoonClans have a lot of Wizards and they are going to need them! ^^ Multiple spells deals Mortal wounds, some of them are very strong. You are going to need a bunch of those spellcasters if you want to have a chance. Also, there are a few good debuff spells that force a target to fight last (super good !). Very strong stuff! 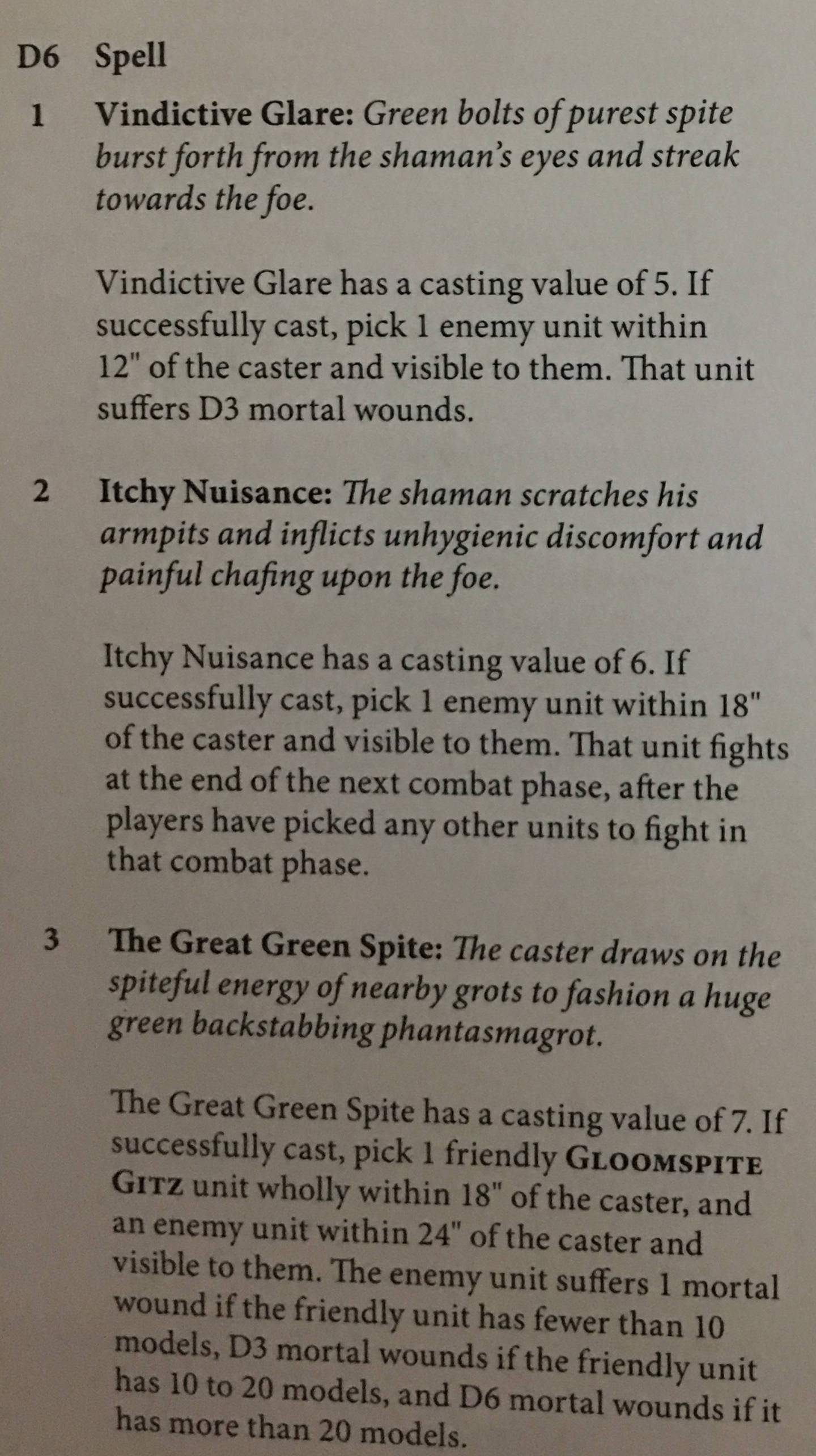 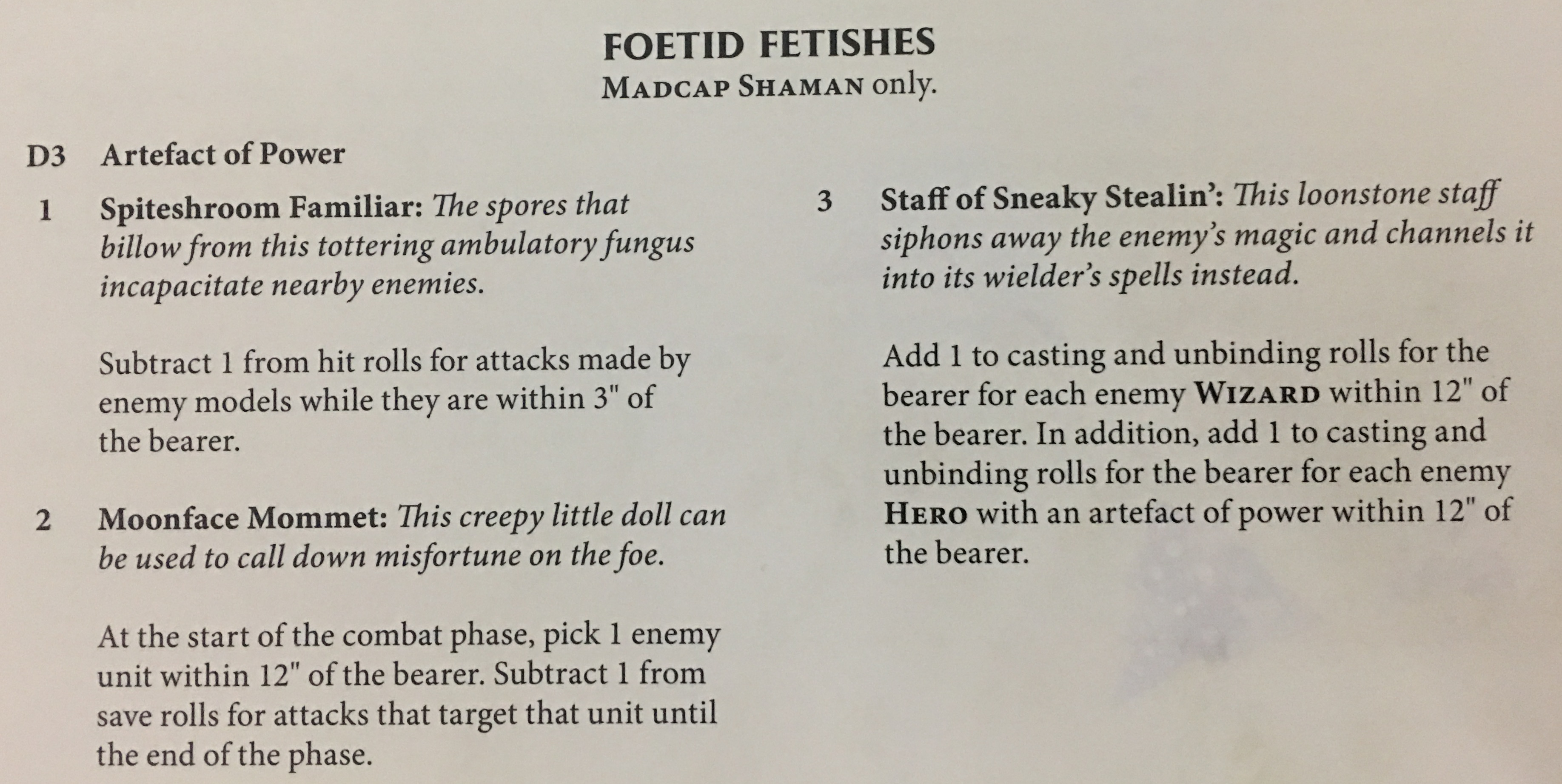 Other relics list are Ok-ish but it doesn't matter as you are going to take Moonface Mommet or Sneaky stealing. Both synergize very well!

Endless Spells
They got 4 of them :

-The "moon" deal Mortal wounds and debuff casting rolls of non-gloomspite wizards. You can really screw a back line of magic users if you use it well. (Auto include)
-Atomic Mushroom: More mortal wounds, Perfect on a big blob of armored infantry ^^
-Spider Tide: Not great but Huge range.
-Spider Cauldron: Great buff, +1 cast and unbind, grant full spell list to the caster (Nearly auto include).

It's Free, Respawn shootta & Stabba, and auto pass Morale in a WW 12". Strong but placement rules force a defensive game!

Moonclan characters commands power are limited in use. Squig heroes buff Squigs, non-Squigs buff Moonclan Grotz (a keyword reserved to basic Stabba & shootta). Stacking caster is the intended playstyle i think and could be super fun to play. If you can get all those casts/unbind bonus you are gold !!
Moonclan are fine but expensive points wise (outside of Moonclan Grotz). Squigs army should be super fun to play but horribly random ^^

Let's get to the spiders !!

If you love spider you'll be satisfied with this part of the book.
In a nutshell, it's a simple army, you get the Moon bonus for your spiders (MW on a 5+hit) buff them with a spell (see after for details) and spam mortal wounds ^^

Still, you need :
The shrine, it's free and auto pass morale around it (12" WW) but the placement rules prevent aggressive play.
The Loonking : Having the moon bonus is VITAL but then you need battle line units :/ as King must be general. Still you can get 3 Squig herds as battleline (for 210pts)

The units selection is a lot smaller than Moonclan and consist only of :
-Arachnarok Spider (Shaman version, Catapult Version, Hunter version, Solo Beat version) :
*Shaman Version *: This one has a spell that double the amount of MW inflicted by a unit. Cast it on a big spider rider unit and profit. That mean getting 2mortal wounds on a 5+ with 2 attacks per spider. The spell last until next hero phase. This is soooo strong !!! Also if you roll 10+ you can buff more than one unit. 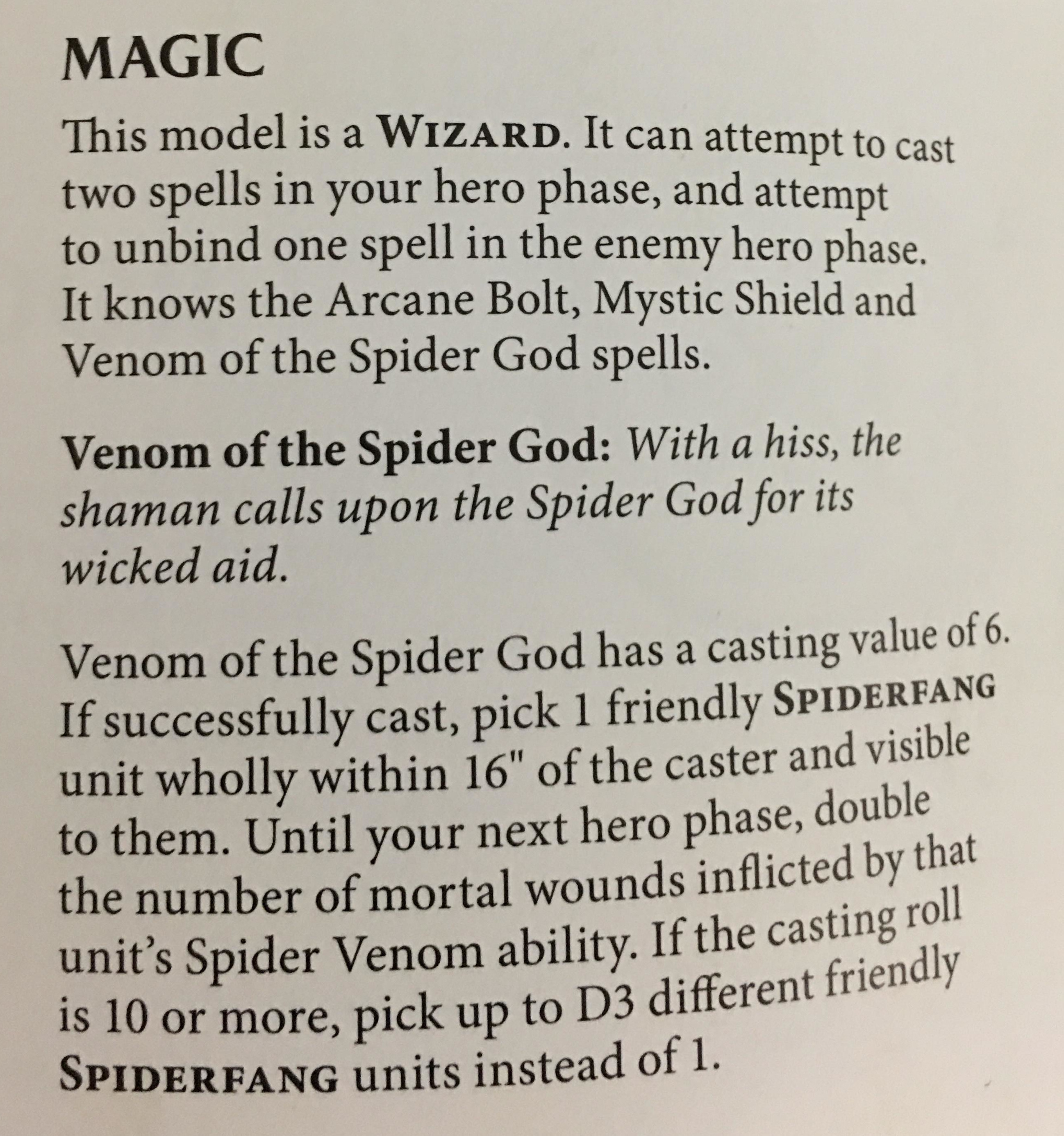 *Solo Beast *: Deep striking giant spider fun time for the back line ^^ there is a Battalion improving the charge chance. but they only cost -40 compared to the shaman version so i think i prefer having another slingger.

-ScuttleBoss : 100, Command that reroll charge range (and riders attack). He's the only one that can get Trait. Not super useful.

-Spider Rider : Battleline if General is SpiderFang. Fly, shoot, deal mortal wounds, get a discount at full force, awesome. You can make them faster in a rider formation (+2 move). Love them!

Quite the limited selection but sound like the scary army of the book! Not sure what is the best build, maybe I'll go Loonking + 3 Squig for battleline, Spider shaman on Giant spider, then double max riders and 2 more shamans I think.

Now that the spiders are done Check some trolls !!!

Trolls have a Hero that grant other trolls as battleline. So yea you can go Full trolls!

Dankhold/TroggBoss :
Regulard Dank is 10w (4+) and 3 Attacks, boss is 12w / 4 attacks (220/300). You need one boss for having River and Strone Trolls are Battleline.
Both versions have one hit kill power that is interesting.
Nothing else to say about them, Awesome models, Ok stats, big trolls.
Better making unit of 1 to avoid losing one troll on morale test ^^

River trolls :
No change but Battleline if the trolls is a General. (160pts for 3). Vomits is still super sexy! Low Bravery :/

Stone trolls :
Battle line and a 5+ FNP against everything. Deal mortal wounds at range (1d3 MW if you roll less or equal than target models number)! Low Bravery :/

Bravery is a problem as losing extra trolls is going to hurt! Still having multiple small units of stone trolls is a decent ranged threat! 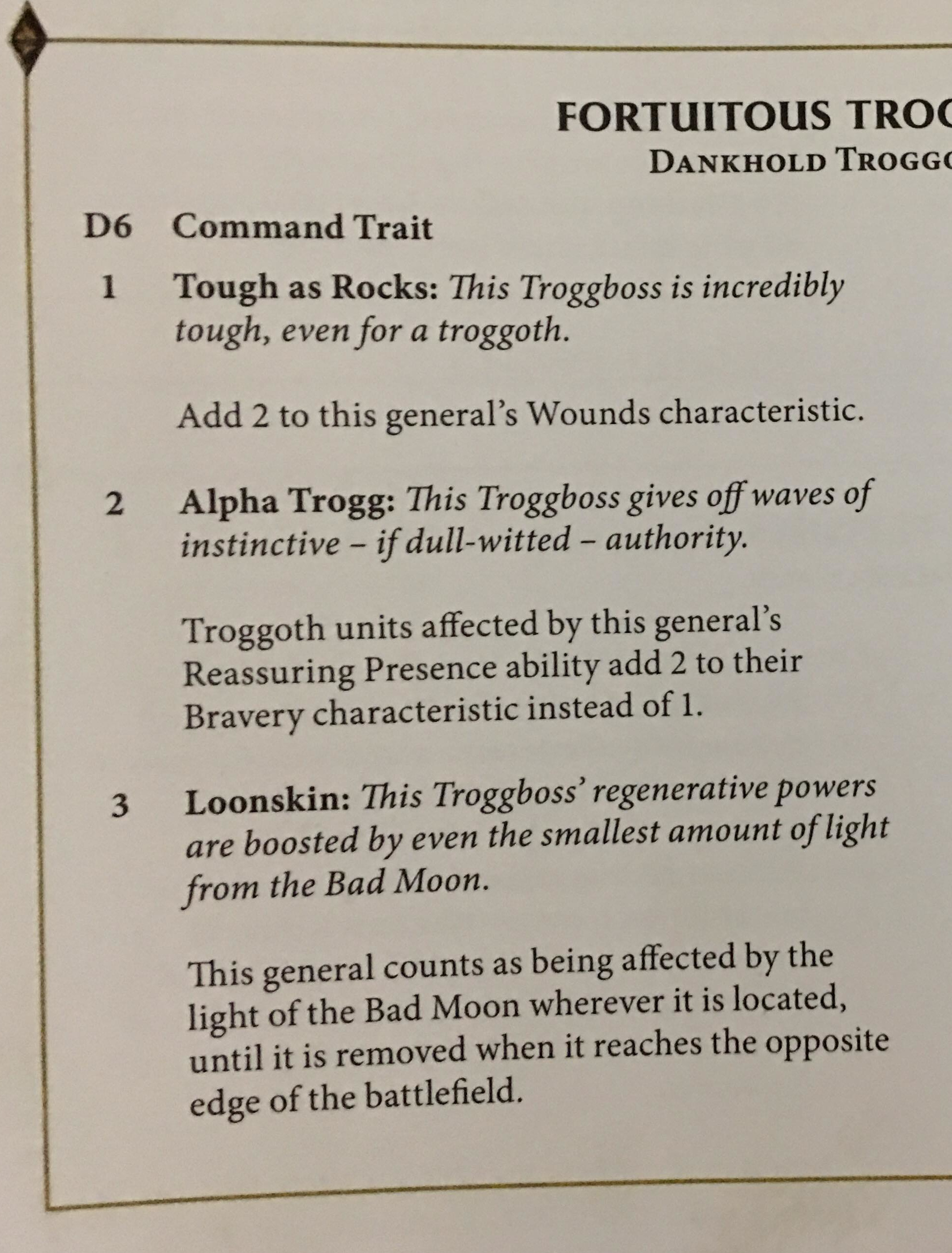