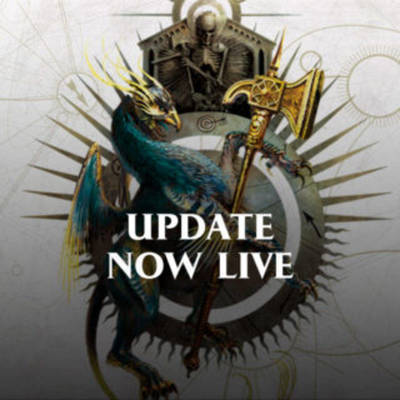 Huge update to the General Handbook and most of the Battletomes.

No reference to table edge.


Every year we do two Warhammer Age of Sigmar rules reviews – one midway through the year when the General’s Handbook is released, and a second about six months later at Christmas. These give us a chance to answer any questions we have received, which are then published in the form of digital updates to the Errata and Designers’ Commentary files on the Warhammer Community website.

Until this year we only updated points values in the General’s Handbook. From now on, though, we will be releasing a digital update to the point values when we do each rules review.

We have decided to do this because the General’s Handbook is sent off to our printers a long time before it actually goes on sale.

This year the Blades of Khorne, Flesh-eater Courts, Gloomspite Gitz and Skaven battletomes were all released after the new General’s Handbook was printed. Under the old system, we’d have just waited to make any changes when the next General’s Handbook was released, but that would mean it could take more than a year to update the points values in those books, even though we had the feedback we needed much earlier.

Some warscrolls are removed from the General handbook other are added.

It's good they removed the stupid terrain rules.
but FUCK they removed Beastlord on Chariot and Centigor Warhoof :/