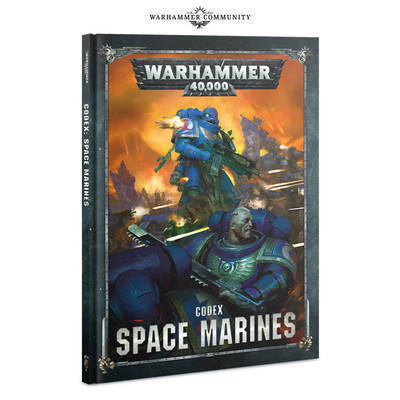 This morning I had the pleasant surprise to see UPS deliver the new Space Marine codex 2019 to my doorstep. To be honest, I mostly focused on the Rules part of the book and will do an update with the fluff later if i have the chance (after I have reviewed the White Scars and Ultramarines Codex).


Angel of death regroup 3 rules that affect all the units in the codex, yes even vehicles get the Angels of Death benefit.

And they shall not know the fear
Reroll morale dice, nothing new here.

Bolter Discipline
Started as a test rule and now it's part of the codex. The rule allows bolt rapid-fire weapon to make the double number of attack if: Target at half range, Up to max range if shooter not moved, the firing model is a bike, terminator, centurion or dread.
So bikes always get 4 shots now, same as Terminator, or Stormbolter on a dread. Also, note that each centurion have 12 hurricane bolter shots ^^
It's a good rule that helps marines a lot and will have even greater effect with the new doctrine, the Ultramarines mini dex and some other stuff we will look later in the review.

Shock Assault
+1 attack when charging, charged, heroïc intervention. It's good for the Smash Captain and a bunch other of melee units. Again, Shock assault in combo with Doctrines, Chapter traits and stratagem is going to help a lot.

Let's talk about these doctrines then!

in our wildest dream, we couldn't have imagined an army-wide buff like this ^^ 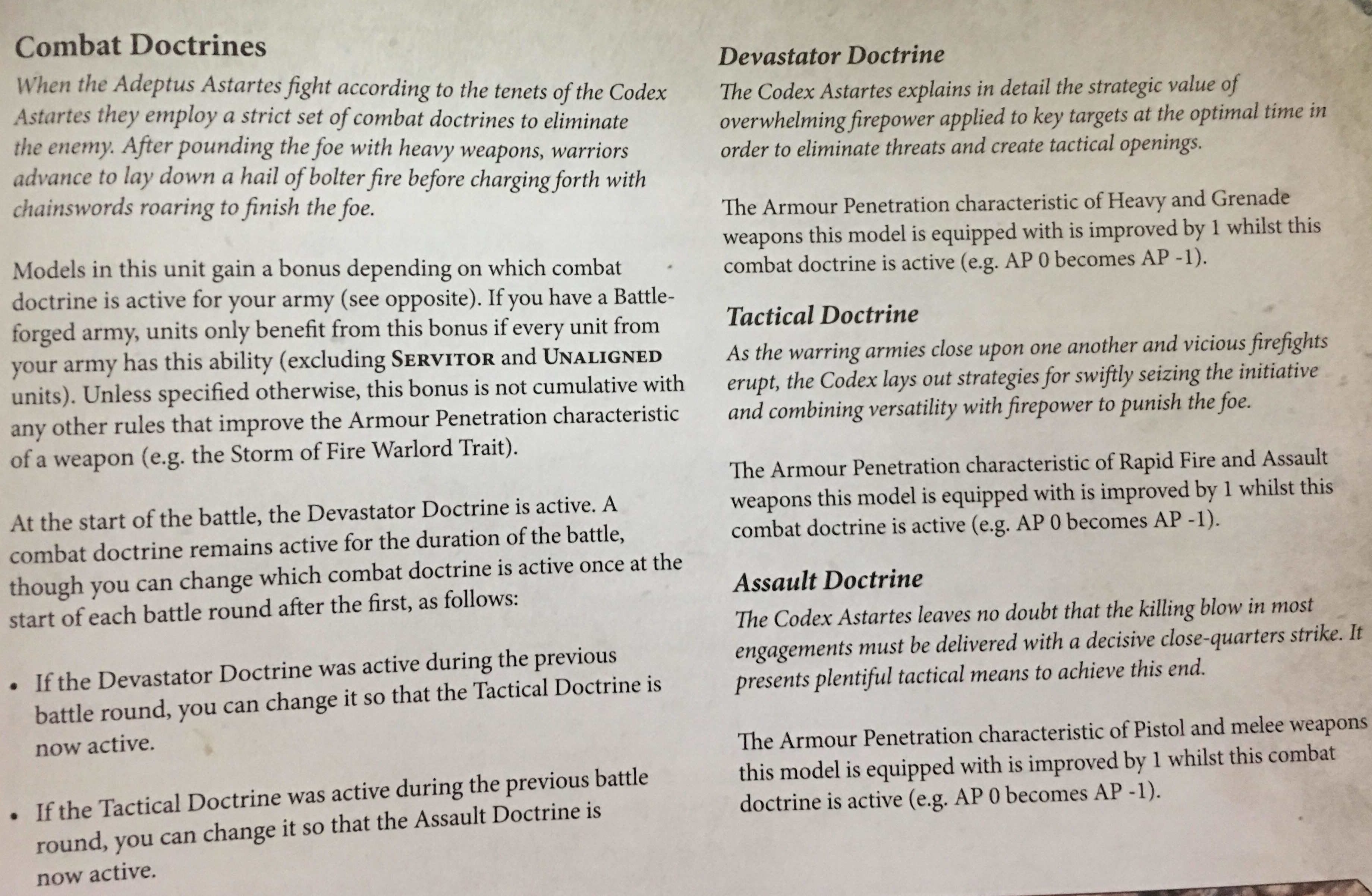 So with careful preparation (or list building), your weapons get -1 AP when you need it. Off course starting the games with the Devastator Doctrine incite to build an army with loads of heavy weapons to use the Combat Doctrine from the start. Combined with the New Stalker Bolt Rifle (36''/h1/s4/ ap2/ Dmg2) on a very good troop choice it's quite powerful ^^ (did I mention eliminator yet?)

But don't discard the other 2. With bolter discipline and Tactical Doctrine, the amount of Ap -2 dakka that intercessor can do is interesting. Even the Special Issue Boltgun reaching AP3 is great for double-tapping !! Combined with new Chapelain prayers granting +1 to wounds rolls and the sternguard veteran stratagem granting the same it's 3+ to hit 2+ to wounds and -3 save.

The assault Doctrine applies to melee weapon and pistol, I am not sure it's enough, but intercessor charging or being charged are 3 attacks with -1 rend and one extra bolt pistol attack with -1 rend in latter turns. 30 3+/4+ ap-1 are somewhat interesting if you can pull it off (i mean having the doctrine up at the right time). Off course again, the big combo is going to be with the White Scars getting +1Damage on melee attacks if this doctrine is active.

In a nutshell, The Doctrines are awesome!! I really think it going to help get Space Marines army back on the meta with more than a Static Gun line.

Another great improvement is that Chapter tactics apply to everything but servitor if you are battle forged. (even vehicle) 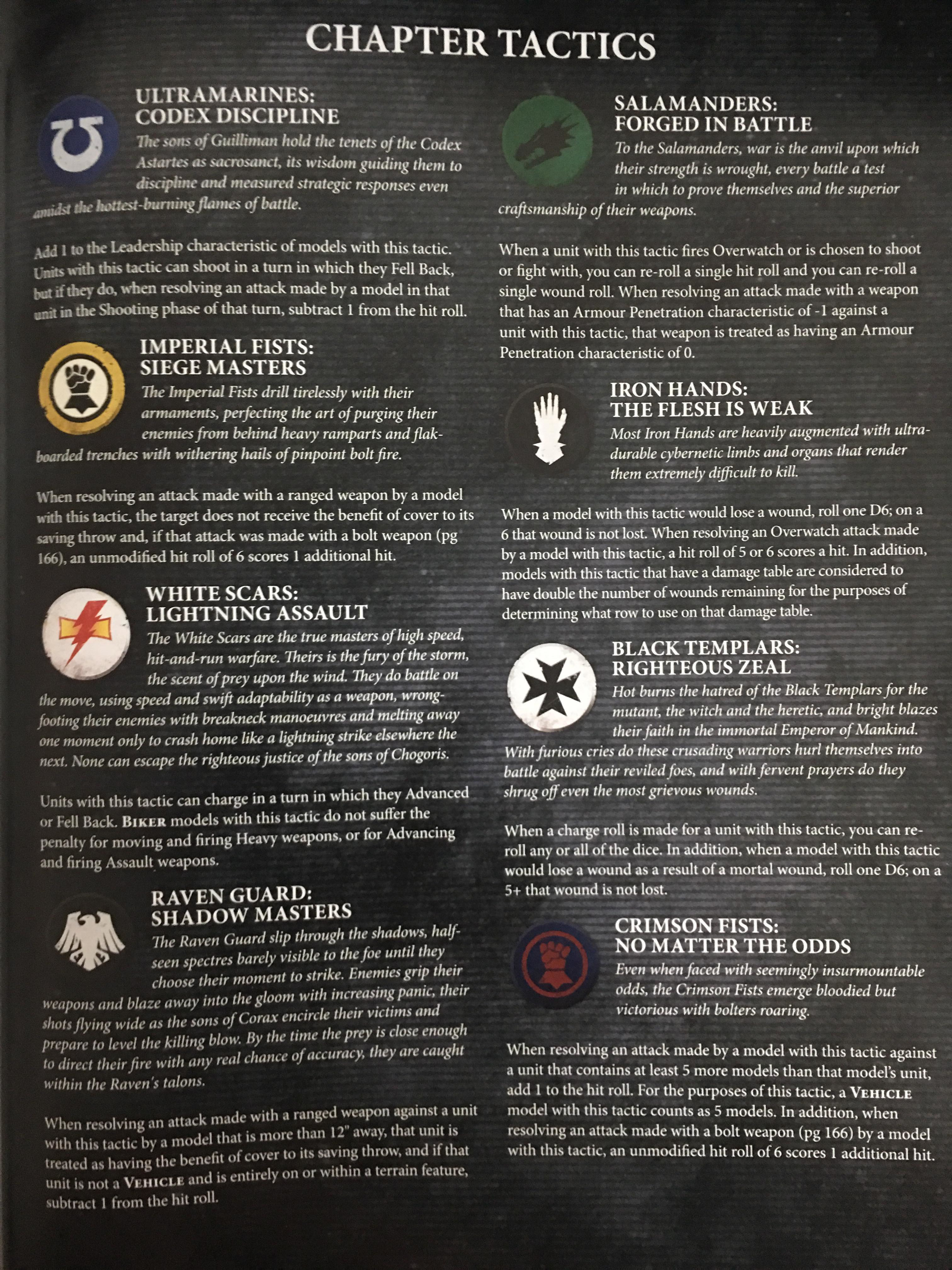 Let's take a second to look at the IF Chapter Tactic, you ignore cover and score an extra hit on bolt weapons. With the devastator Doctrine, it's a 33% swing in your favour if your target is in cover. A barrage of Heavy weapons negates so much of the opponent's deployment. Stacking it with Chaplain buff (+1 to wounds or +1 to hit), reroll aura, and stratagem it gets bonker good.

Off course this codex brings new rules and new units, so who is a hero now? I am not going to describe each unit in the book (there are too many) but select a few that get interesting in this new dex.

Chaplain
No change to his stats
This codex introduces Prayers in the form of a 3+ roll you can make at the start of each battle round. Each Chaplain knows the good old Litany of Hate (so it's a nerf because now you have to roll to use it) + 1 from a list of 6 :
+1 to hit with ranged weapons (one unit)
+1 to wound with ranged weapons if the target is the closest (one unit)
5+ FNP against mortal within 6''
Extra attack on a 6 in melee (aura 6'')
+1 attack, strength, dmg (self-buff)
+2 charge roll within 6'' and pile in / consolidate 6''

it's good because give some buffing to range attack, works on a tank. An HellBlaster Squad with HeavyPlasma incinerator on overcharge during Devastator Doctrine

Do you remember the time we only had Tac squad and Scouts in troops?
Now there are 5 choices, intercessors are awesome with the Doctrine and the new Stalker riffle.

Infiltrator and Incursor have standard Primaris stat but they bring tech piece that you could need. They also are both Infiltrators that can start on objectives from the start and give serious mobility if you play a static gun line.

Incursor can get one mine for 10pts that deal 1d3 MW and 1d3+1 on a vehicle it's one per unit max. ignore cover when firing and hit roll modifier or BS modifier.

Infiltrator didn't change much, but you can have a comm array instead of a Helix adept. Comm array makes the unit always in the range of aura from Phobos Captain and Lieutenant.

Still, no Primaris inside, no terminator or dread version but they can drop turn1 in matched play and ignore tactical reserve rule. You have to disembark 9" from enemy now so not in range for a half range Melta shot.
I am not sure it's still good but at least it's an option.

Ok, it's expensive(around 300 full fitted). But with Devastator Doctrine nearly all his weapon gain -1 rend. It can transport Gravis armour so it's extra value.
It can move half and shoot twice his main weapon and this is crazy. With support (chaplain, CM, Lieut..) you can get super reliable fire-base that removes threats from very far ^^

No change but Devastator doctrine, Chaplain support, reroll aura and Imperial Fist Chapter trait. All this allow strong long-range bombardment that ignores LOS. All this also apply to Whirlwind!

That Wrap the unit section, but it's not exhaustive. Sternguard benefit from the new doctrine and combined with a stratagem that grants a +1 to wound. Speeder and bike have a lot of nice tricks too.
Also making melee army should be doable (maybe ^^)

A lot of options again

Vanguards
Make a free move after shooting
Redeploy one unit
bonus move and charge
Minus 1 to hit
One Friendly Phobos unit gets +1 to hit.
1 Bonus dmg to warlord ranged weapons.

It's funny because Phobos characters have no equipment options (because of models I guess) but have specific Traits.

Chapter Specific
Ultramarines: get commands points back on 5+ (once per turn)
Imperial Fist: +1 Save in cover against AP1 weapons within 6"
White Scars: Mortal wounds on a charge.
Raven Guard: No Overwatch on the warlord
Salamanders: +2S to the warlord (Smasssssh Captain !)
Iron hands: Extra attack on 6
Black Templars: Heroic Intervention 6"
Crimson Fists: Raise dead on a 4+ with 1d3 wounds the first-time Warlord dies.

There is now 2 list available : Librarius and Obscuration
Librarius 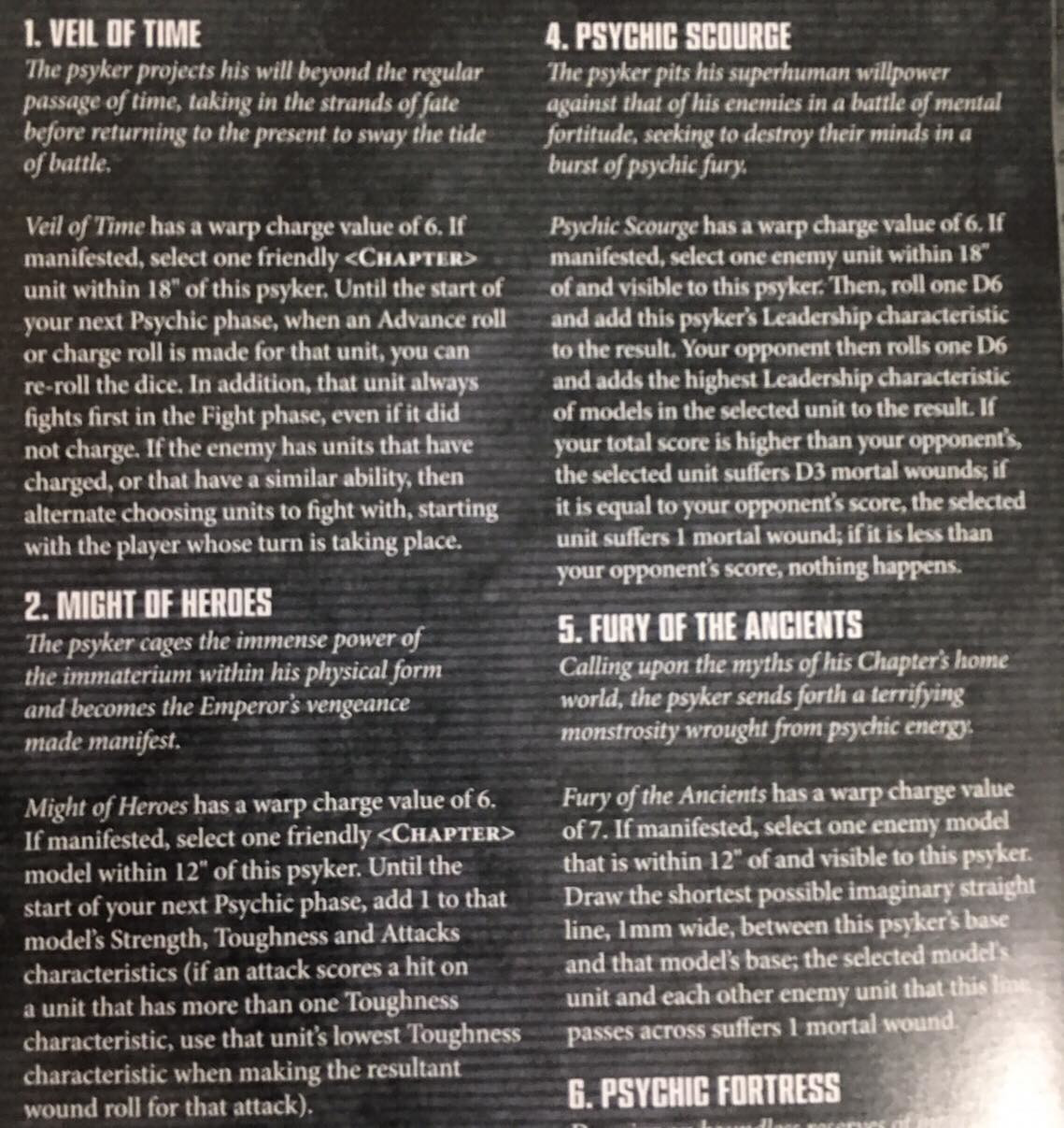 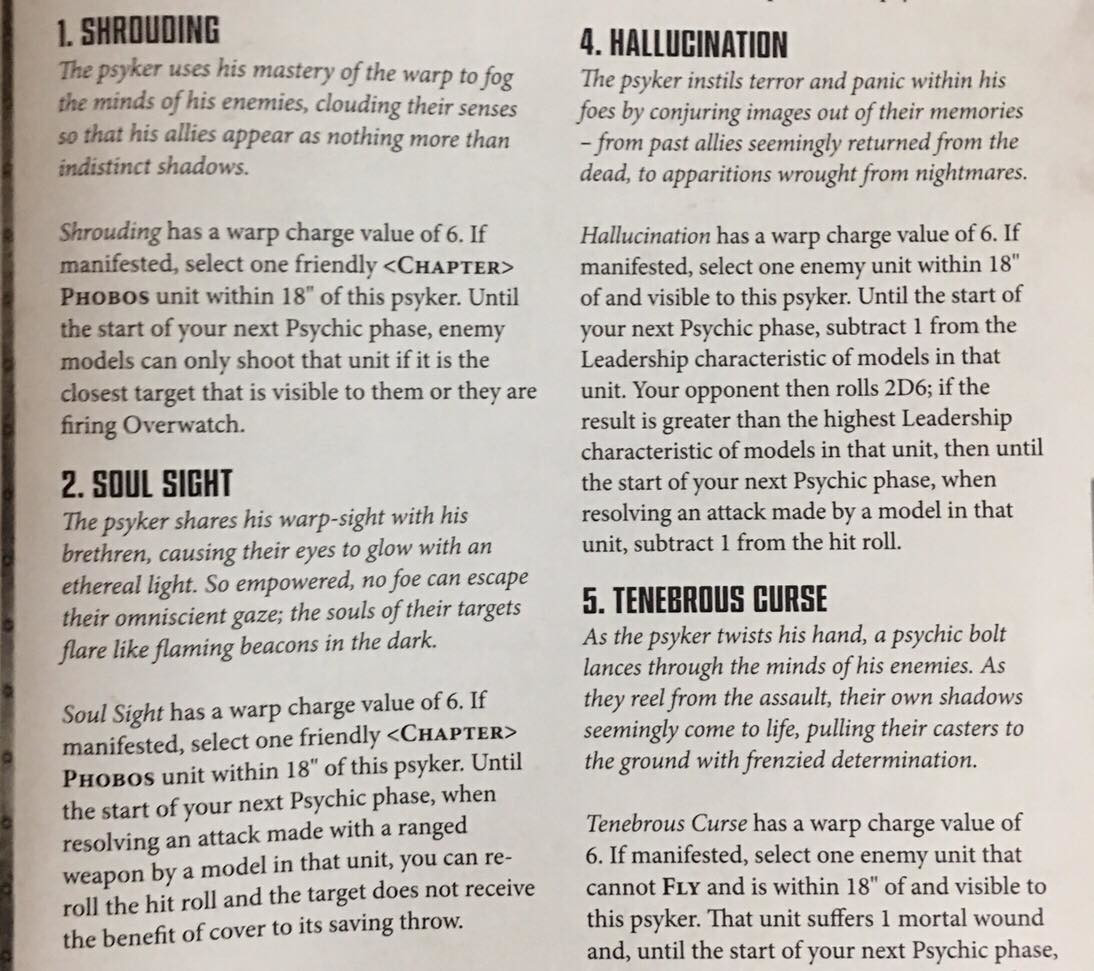 As usual, there are loads of them, the novelty is Adaptive strategy allowing to rewind the Doctrine but its once per battle only!
For 1 command point, you can go back 1 step on the Doctrine ladder!

That's it for the review of the Warhammer 40000 Space Marines Codex 2019. It's a good codex for sure, the power jump from the last one is huge. After reading it I feel there is too much stuff. I am sad as everyone when models get removed but yea it's a bit too much right now. My second gripe is the lack of options for the new Primaris range.
Apart from this, the codex is great, loads of options, interactions and cute combo. I am not sure it will be enough for the competitive scene but it should if you are playing gun line.

Any questions ? drop it in the comments.