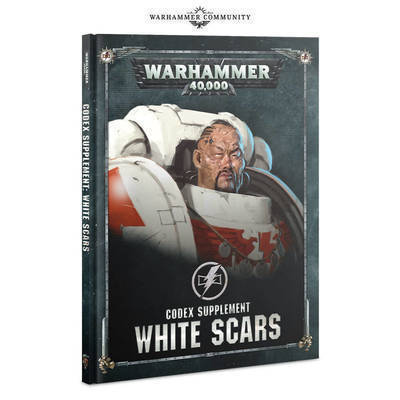 This codex is a thin(70 pages) hardcover book. It's standard GW quality so there is nothing wrong about it.
The 3 main parts of the book are The fluff, the model's pics and the rules!
I book is very small even smaller than the Ultramarines supplement. (https://war-of-sigmar.herokuapp.com/bloggings/4081)

The first 30 pages of the book are dedicated to the Chapter presentation. It's quite complete with a lot of details on the different companies and units. There are also details on Chogoris, the Khan is disappearance. Some fight between Scares and Red Corsairs. It's interesting but I didn't find any big reveal or anything.

10-12 pages of Painted models.
White Marines are beautiful but none of the new Primaris supports the White Scars style! so it's a bit sad :/

Devastating Charge is a new rule that is added to your army if it has the White Scars keywords. 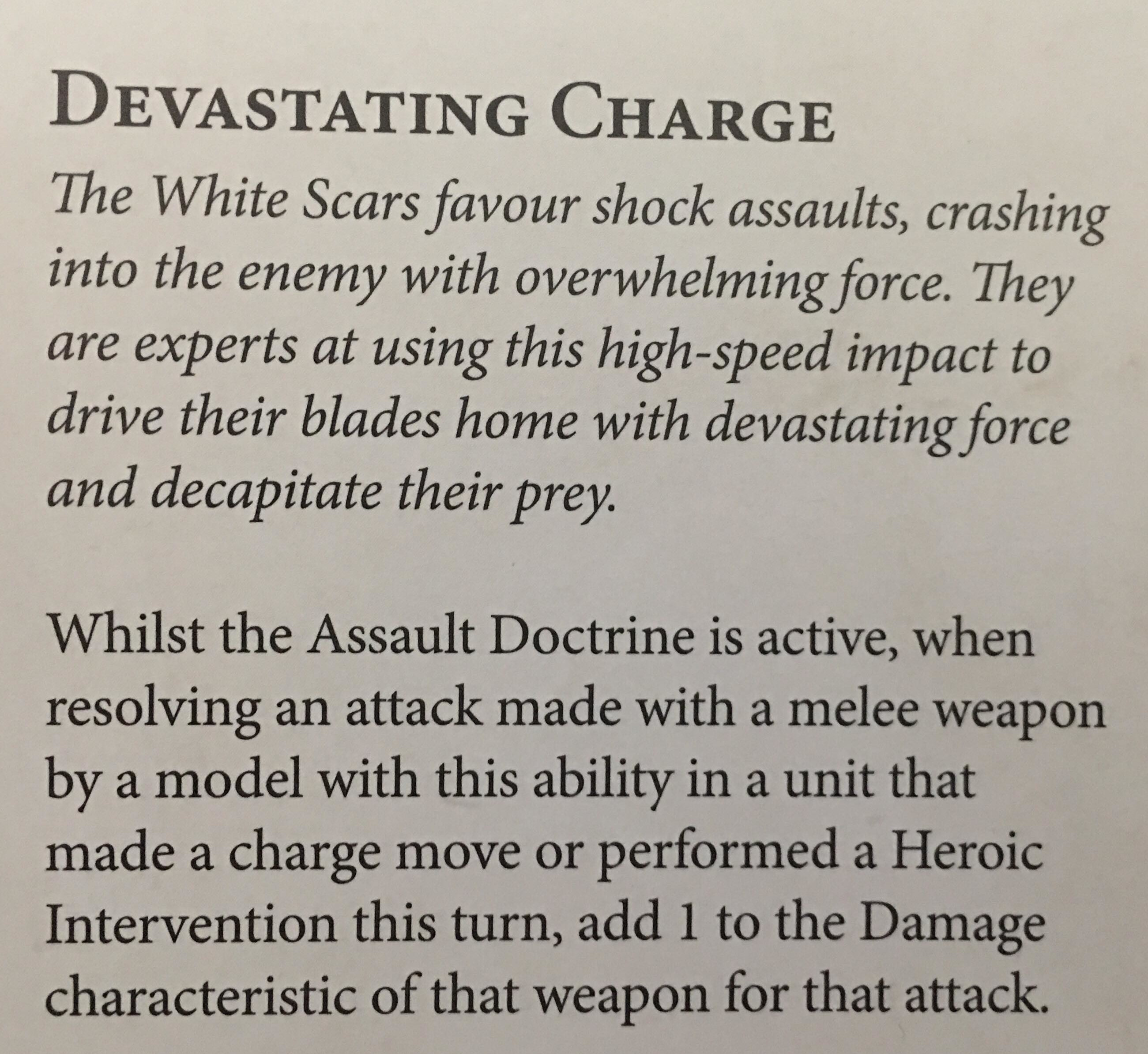 The rule is strong for sure, one more damage per attack on the charge. When Marines already gain 1 attack for charging and White Scars can run and charge you are guaranteed to hit like a truck.

One Marine with a Chainsword with the doctrine up and charging is :
3 attacks, with AP -1, dmg 2.

Best way to maximise this buff? A large number of models generating free attack and extra wounds on the charge. One assault squad with 2 Eviscerators is 172 points only ! and that brings a lot of pain but in turn 3 :/

The main problem will be reaching Assault doctrine while benefiting from Devastator and Tactical doctrine on the previous turn.

There are 6 extra Traits that you can choose from.
honestly, they are not that great :/
I think I would always choose Imperium sword from the marines dex (reroll charge dice.s, +1 S&A on a charge) or maybe Master of snares (prevent Fall back on a 4+) 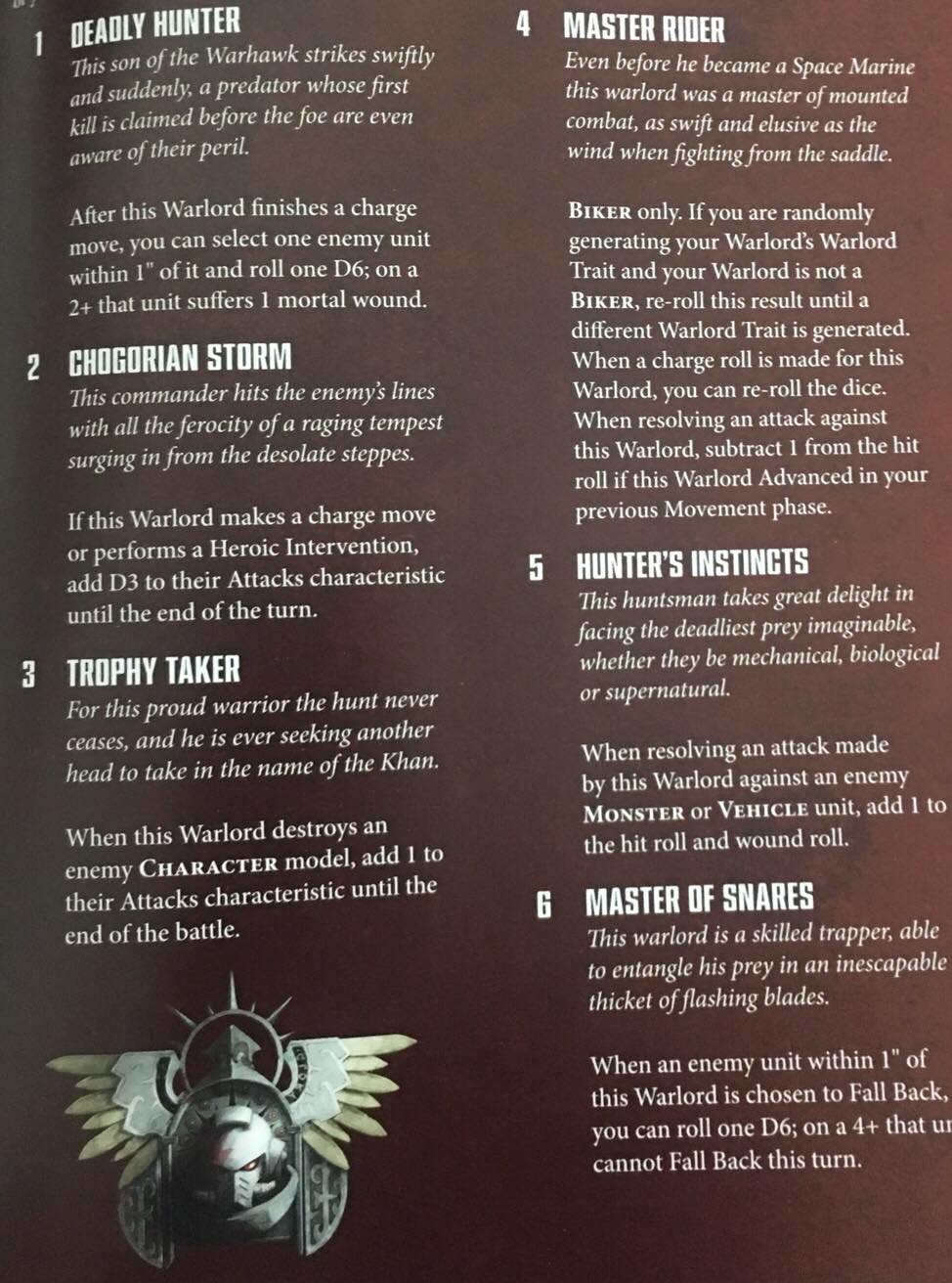 2 list here, one for White Scars and one for Successors Chapter Special Issue Wargear.

Same as ultramarines with a few difference :
Cyber eagle helm: Overwatch on 5+ within 6
Bolts: one attack S7 ap1 dmg 1d6

There is no stratagem that allows getting faster to Assault Doctrine :/

From the Space marines codex :
Big guns never tire will be useful if you want to do a first turn rush with a Speeder unit (ignore malus to a heavy weapon)

Chapter Master
There is no chapter master option the White Scars codex so you'll need 2Cp if you want one.

2 pages of them and some of them are quite good :

-Born in the Saddle: Run and shoot with bikers
-Wind swift: Move twice (but can't do anything after)
-Hunters Fusillade: Transform heavy weapons and rapid-fire weapon into assault weapons. (very good on Speeder units)

So, in a nutshell, you can first turn transform 2 speeder unit in rush bomb to swoop 20" and shoot without malus.
Then on turn 2, you can transform heavy weapons into assault weapons for benefiting Tactical doctrine on heavy weapons. 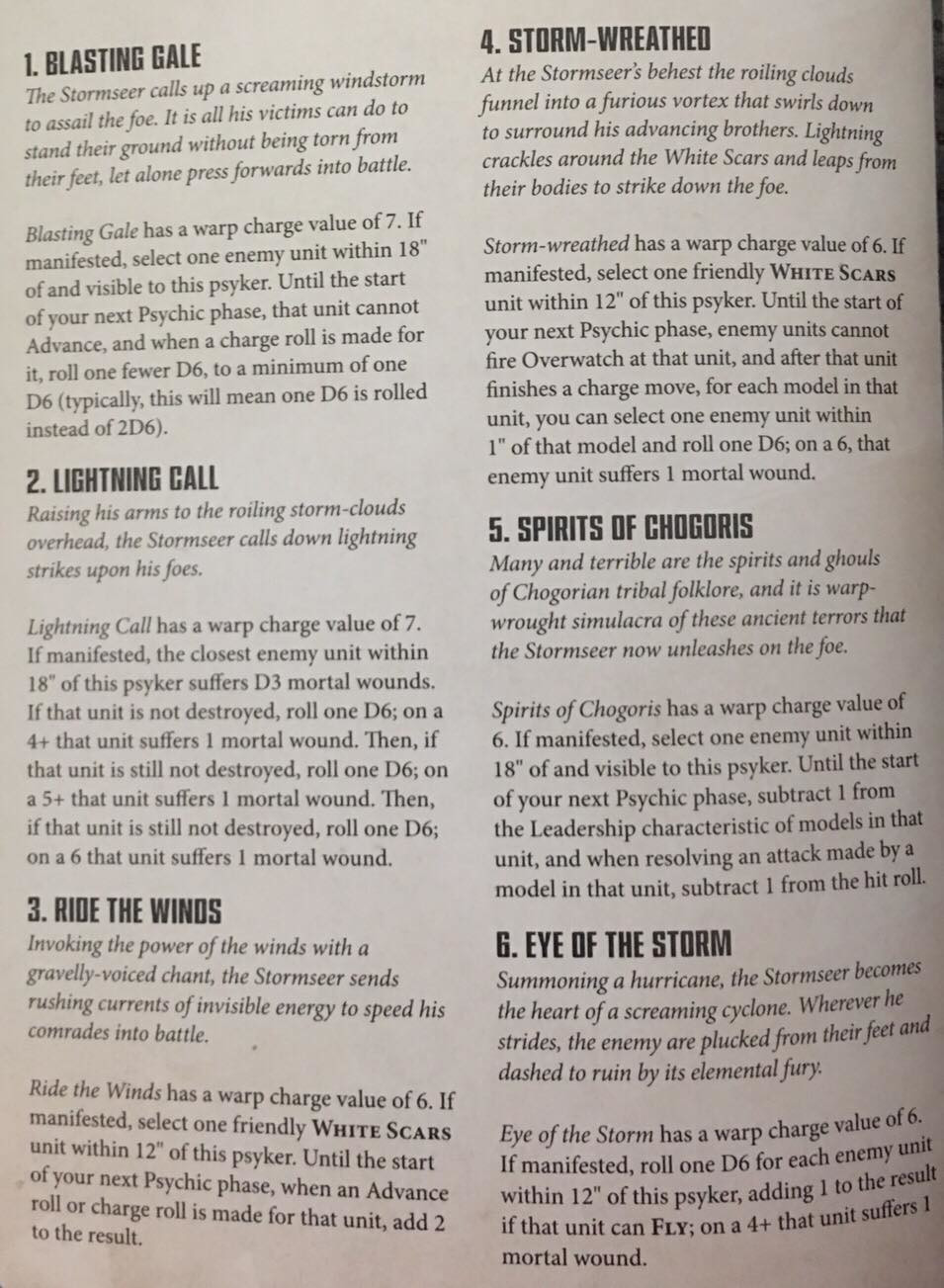 Some cute spell-like Blasting gale (no run and charge with one dice), Storm wreathed protect one unit from Overwatch and deal a few Mortal wounds (with luck),
ride the winds is a bit overkill but allow some super far charge, move 14 run 6 +2 and charge 2d6+2 = for 31" average threat range ^^ (White go Faster now !)

Only 2 units present in the book, no chapter master, no bike squad as troops or some interesting twist on units.

Primaris, Not on a bike, Not a chapter master :/ 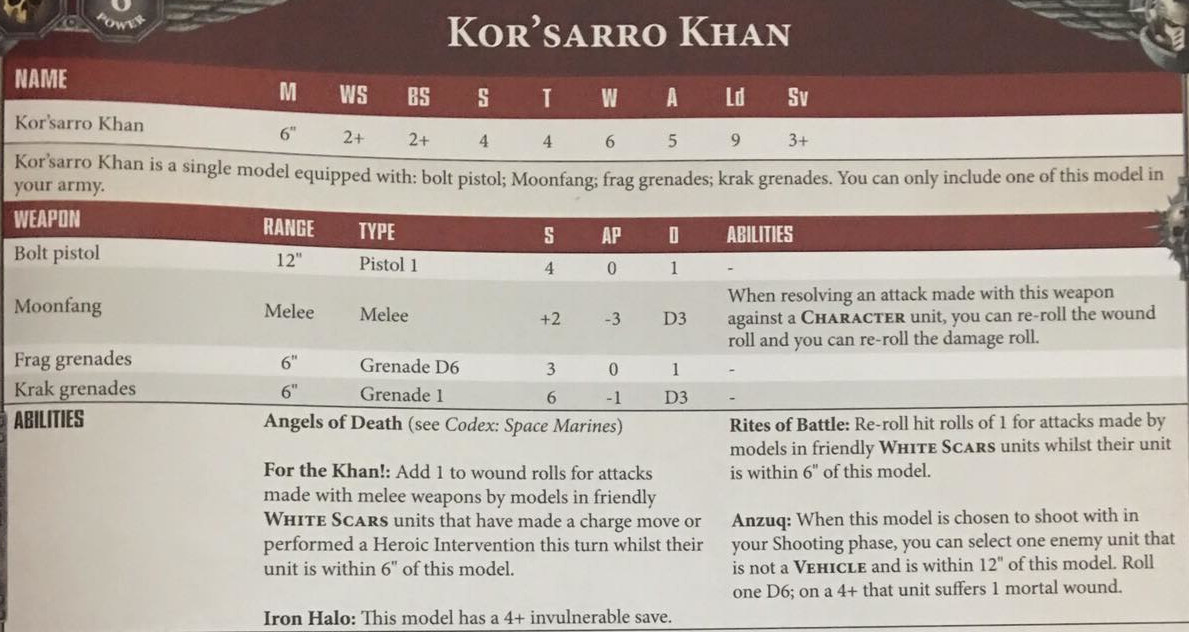 Cool "for the Khan" rule but with a 6" move and 6" aura it's pretty hard to apply. Maybe tuck him in an IMPULSOR with 5 intercessors and support real White Scars unit

Interesting take it's a captain with a spear on a bike. There is no option but the basic setup is nice, +1 SV vs melee, with the right warlord trait and chapter master he should be 7 attacks on charge! '(Nice smash captain !)
100pts 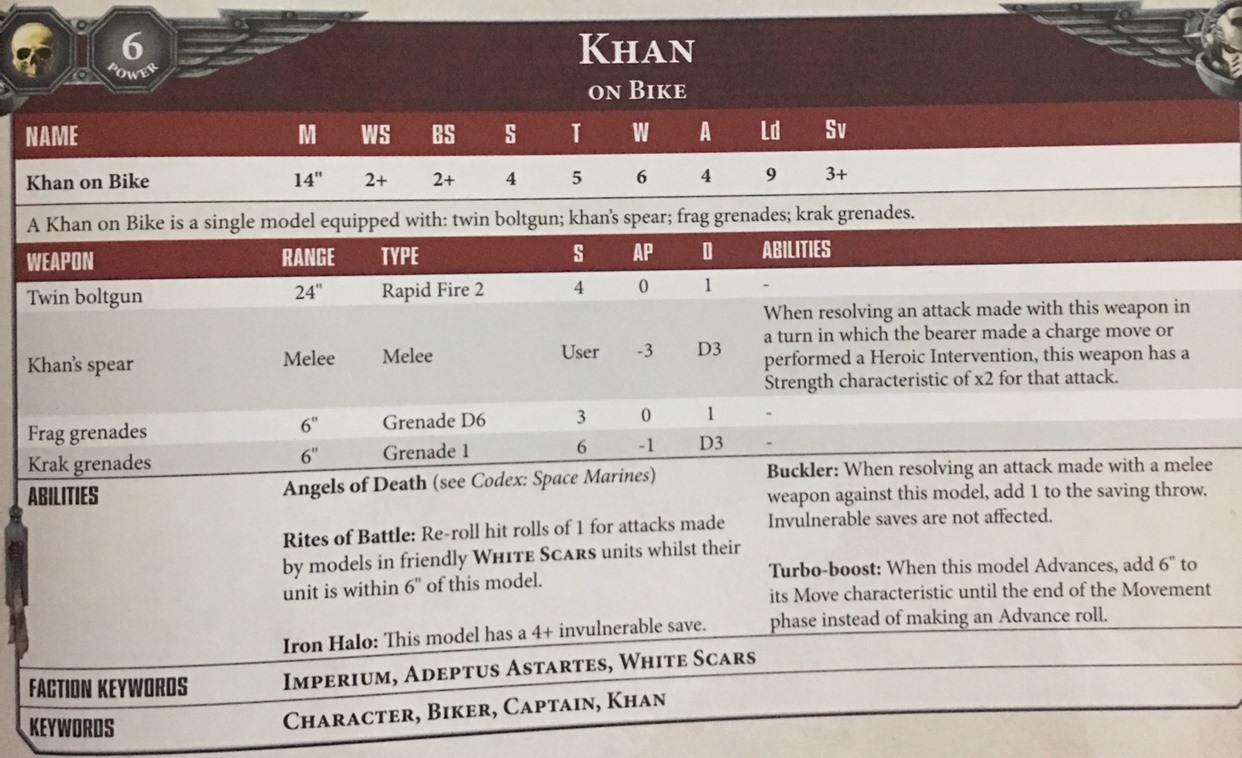 I don't understand why there are no White Scars bikes units in the codex, they could have a different one (with special rules), or in troop or Elites?
It feels very bland.

Looking at the Space Marines Codex, one bike is 23pts and Assault Bike is 49pts. I am not sure yet what is the best set up but I think you want bikes

I'll be honest this codex feels super lazy, there is nearly nothing in this book :/. It's been a long time since GW made such an obvious (to me) cash Grab.
The codex premise is this Assault Doctrine but there is no option to use it earlier than the third turn, now way to apply it on a unit as Ultramarines do. You are going to need loads of CP but have no good compo to have them.

Maybe I am too hard but I am not impressed by this book at all :/

That's it for the white scars !!
As usual, ask a question here!