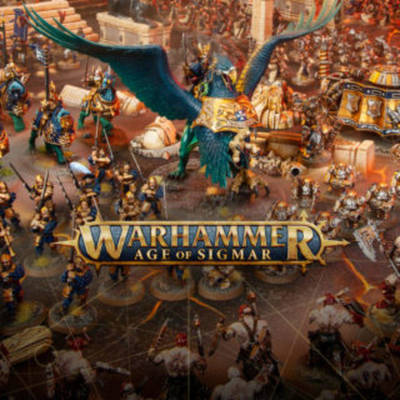 Today we are going to do a quick review of Cities of Sigmar Battletome for Age Of Sigmar. I know it's a bit late but as you maybe know I was at the WTC this weekend and came home Monday morning.

Cities of Sigmar is the latest Order Battletome. It covers all the Order units from Warhammer Battle that Games Workshop wants to keep in Age of Sigmar. Of course, that doesn't include units from Chaos, Death or Destruction. In more details, you can find warscrolls from Empire, Wood Elves, Dwarfs, High Elves, Dark Elves all mixed/Classed by Theme (or City)

The Battletome offer a very Large choice and you can build an immensity of Army with it. Not only you can use a large number of old units from Warhammer, but you can include Stormcast, Sylvaneth, and Kharadron Overlord.

The book is incredibly thick with options and choices. After examining the Allegiance Abilities and the unit roster, the review will be articulated around each city.

All the cities in the book get a few general rules :

Endless Spells cast by Cities of Sigmar Wizard always benefit from the Realm bonus! This is insane, the different movement spells get huge benefit from the Realm improvement (Bridge with 24" range^^). Emerald Lifeswarm bumped to healing or resurrecting 1d6 wounds. Also Geminid and Burning head benefit a lot from this ability.


One every 4 units can be a Stormcast Note that the SCE is getting the cities of Sigmar keyword and the specific city keyword.

Including the full Stormcast roster to the very large Cities of Sigmar army is remarkably fun, imagine the number of combination you could do ^^ It makes my head spin.

While Cities Of Sigmar regroup many armies from the Old World. A lot of units were not included, i don't know what does it mean for them but i guess it can't be good ^^ Also remark a notable points reduction across the board on a large number of units. 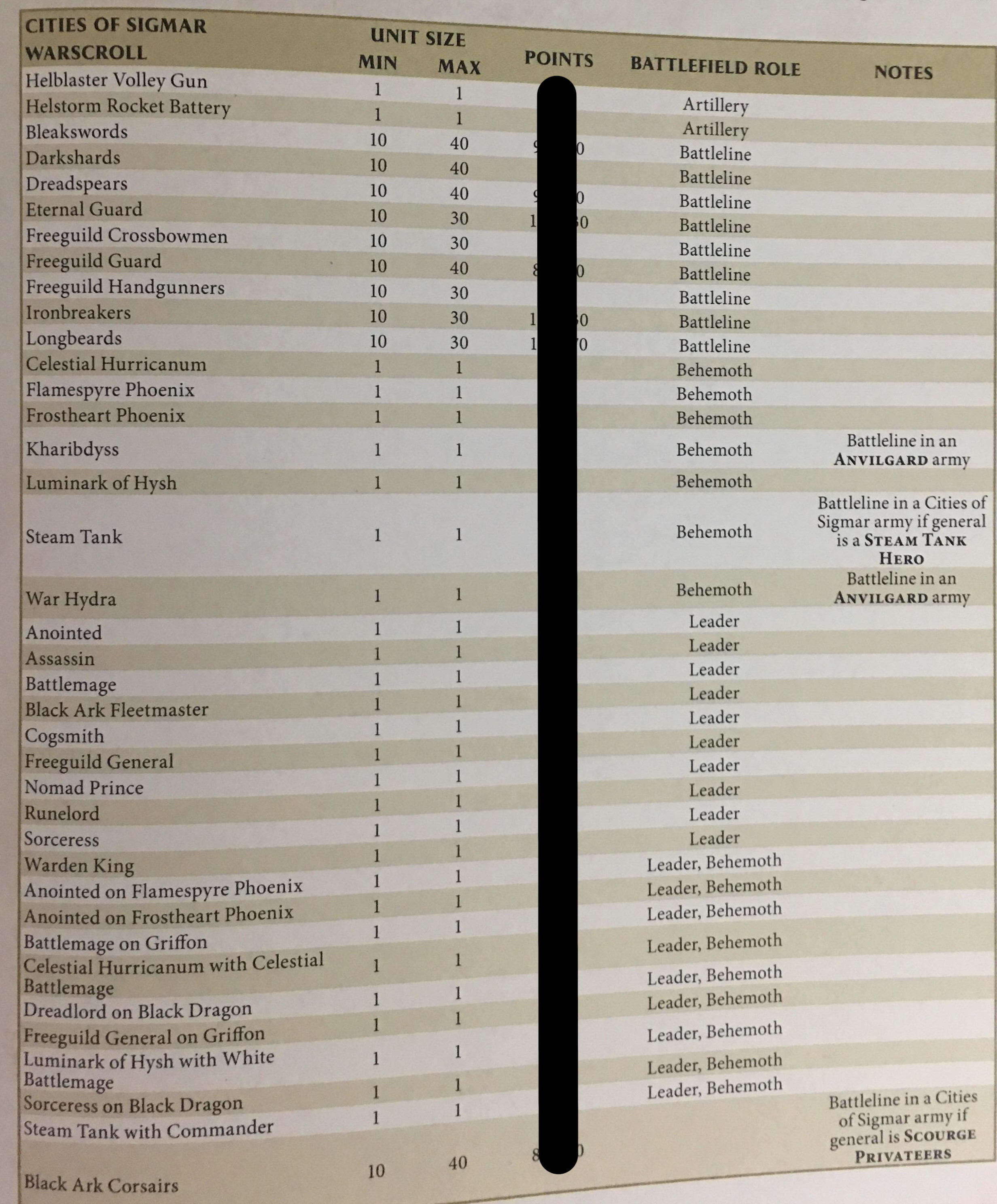 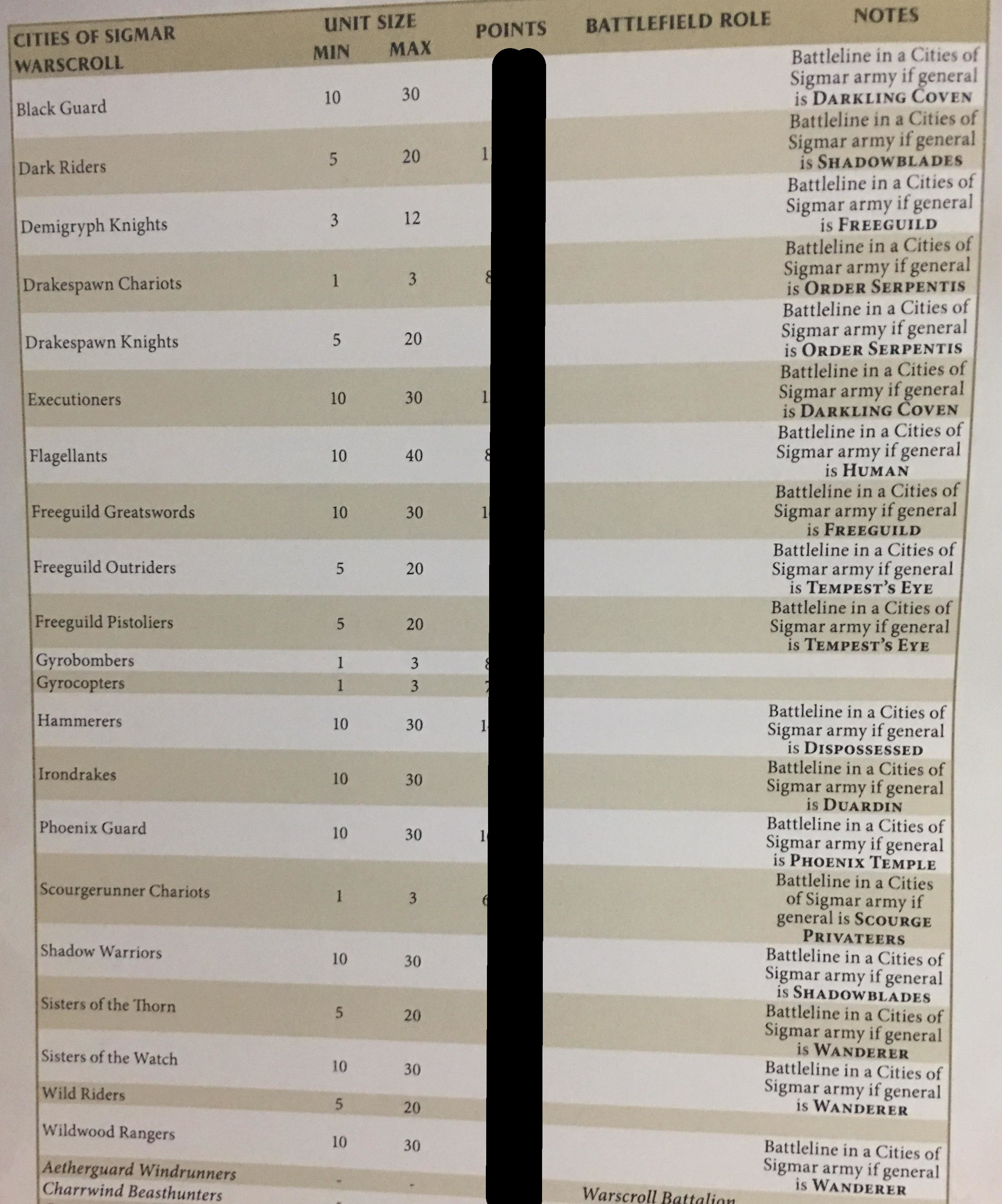 See the number of Battleline entries, nearly half the Warscrolls can be made Battleline if you have the corresponding: City/General.

Hurray for the Steam Tank Army!

7 Cities of Sigmar are described in the book, for each of them you get a fluff page at least and the usual: Rules / Traits / Relics / Spells

This is the most described city in the book. The City is dual realm so you can choose Aqshy or Ghyran as a realm (from the sorcery book).
Rule wise they are super solid, not skewed on a particular strategy with a very strong command Ability. Standard strat would be, get some extra commands points and spam the Hammerhal command for value. 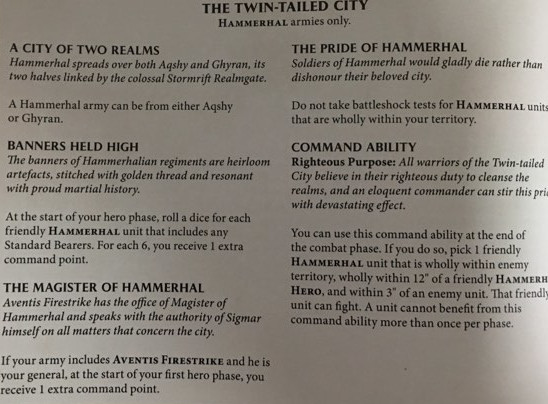 Rest of the rules are very good as well, for example, a trait gives +1 to hit when charging for unit wholly within 12". 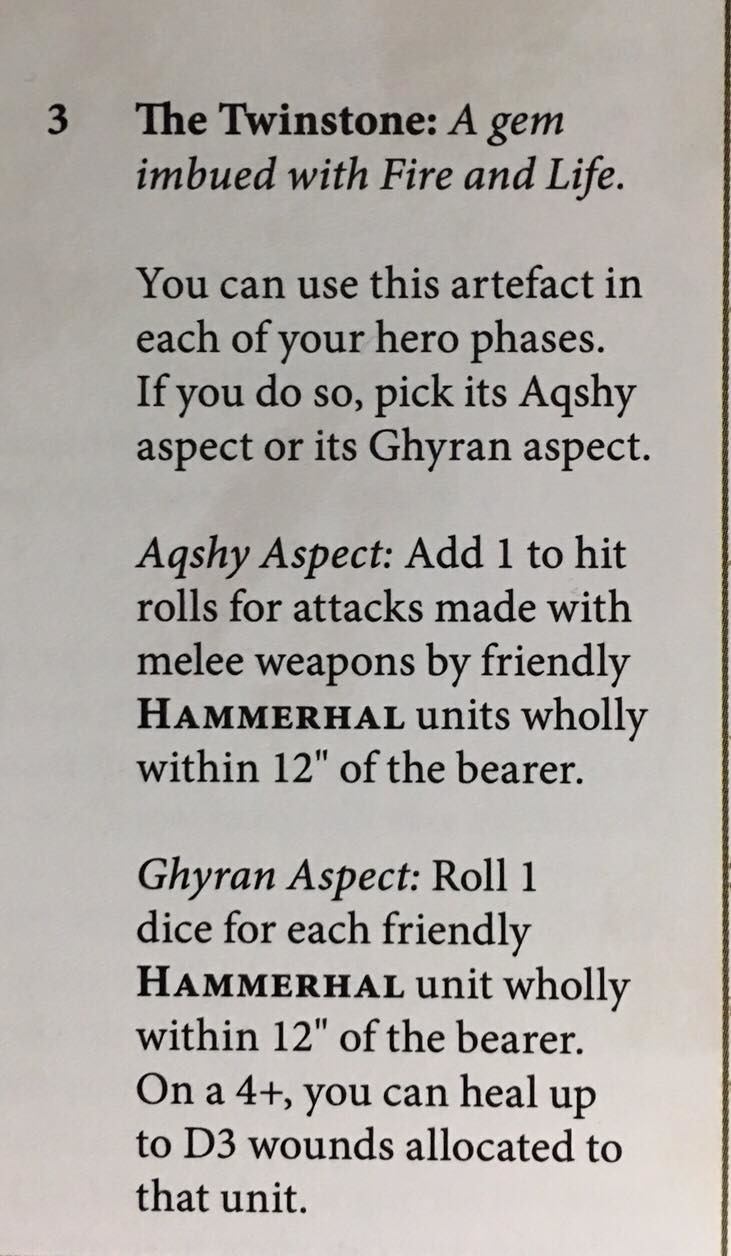 Edit: Strong incentive to Bring a big pack of Desolator !! you can bring them to 2+ to hit, they gain extra attack from their number and you can use the Command Ability to make them attack again !

The city from the realm of life. Can include Sylvaneth and Stormcast units (1/4). I am sure some incredible combos are possibles ^^ 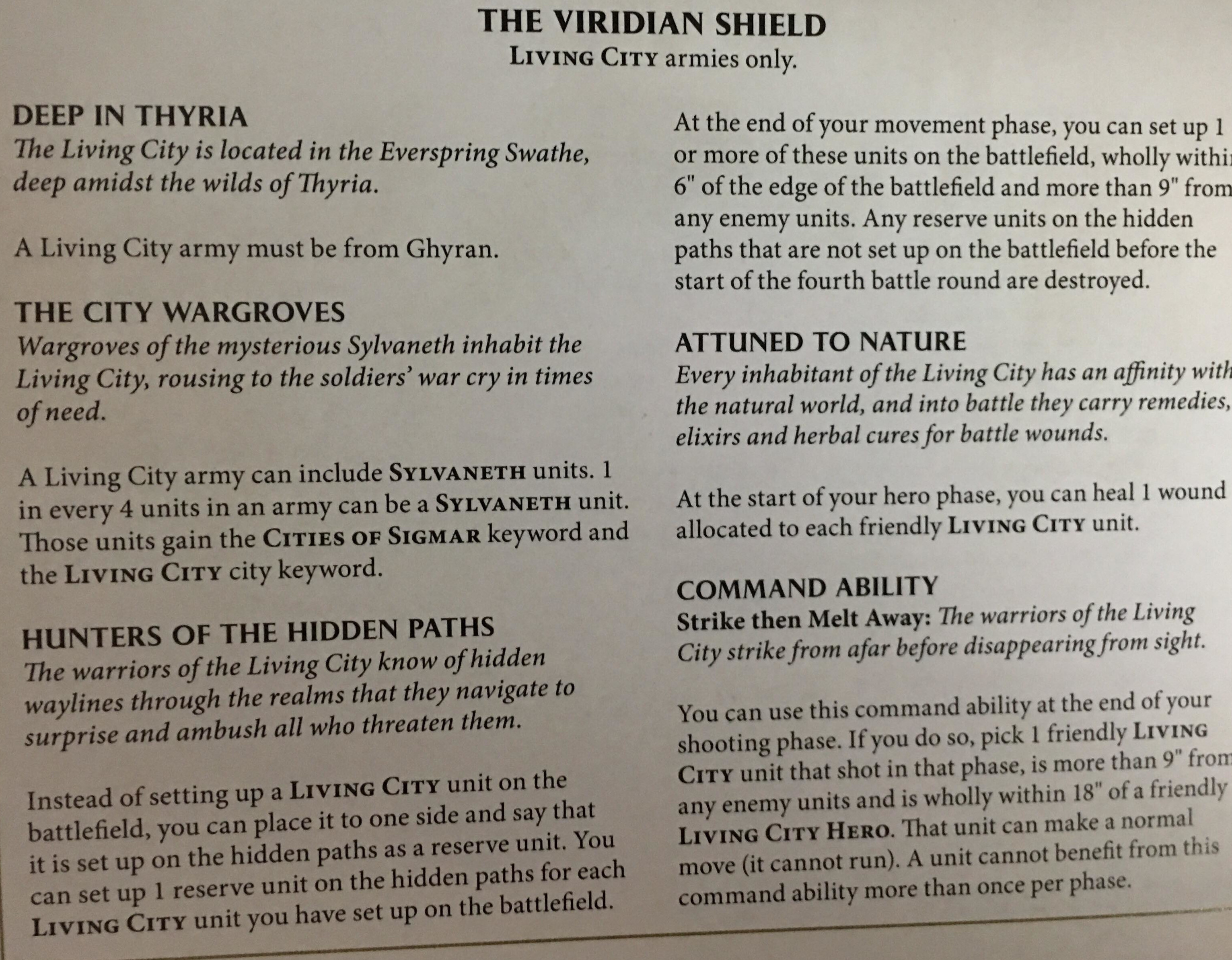 The different powers are decent, nothing groundbreaking but the real value is, I think, having Sylvaneth/Cities/Stormcast all mixed in one army.

Having multiple wounds unit is very valuable in this army as you can heal from Attuned to nature. Also the Lifesurge spell allow your wizard to heal 1d6 wounds. The Endless spell Emerald Swarm heal/rez 1d6 also. Maybe you can set up a nice Attrition / Ranged attack list.

Sad :(, that the dwarf canon is not included in the Battletome, but if you plan to field Artillery and Steam Tank, Greywater have you covered. 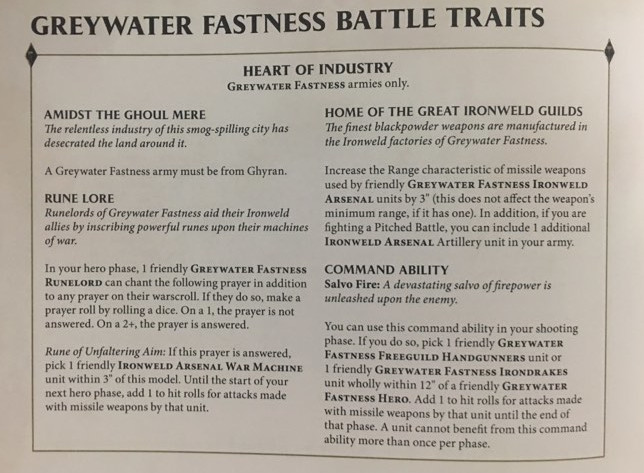 The Rune prayer is awesome if you stack it with Lord ordinator +1 to hit. That means, Hellfire hitting on 2+ rerolling one if shooting at one target ^^ (need lord ordinator, Cogsmith aand rune lord package) but you can apply aura from Ordinator and Cogsmith to multiple Artillery unit.

You can also combine it with this Battalion (120pt) ^^ 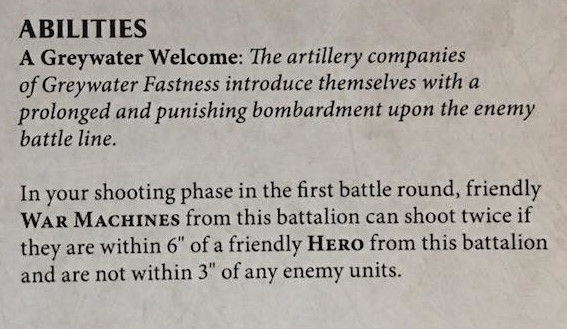 I really think this combo is going to be meta bending. If you have a way to mitigate the first turn Barrage you can play the game, if you don't, you lose turn 1. Greywater Fastness armies are maybe the iron hands of AOS, strong and the First Turn Alpha is maybe a bit much. Will see ^^

The City of Elves and Pheonix, rules are ok but not great. Phoenix got a nice points reduction so maybe that's enough to make them good. I am not sure ^^ 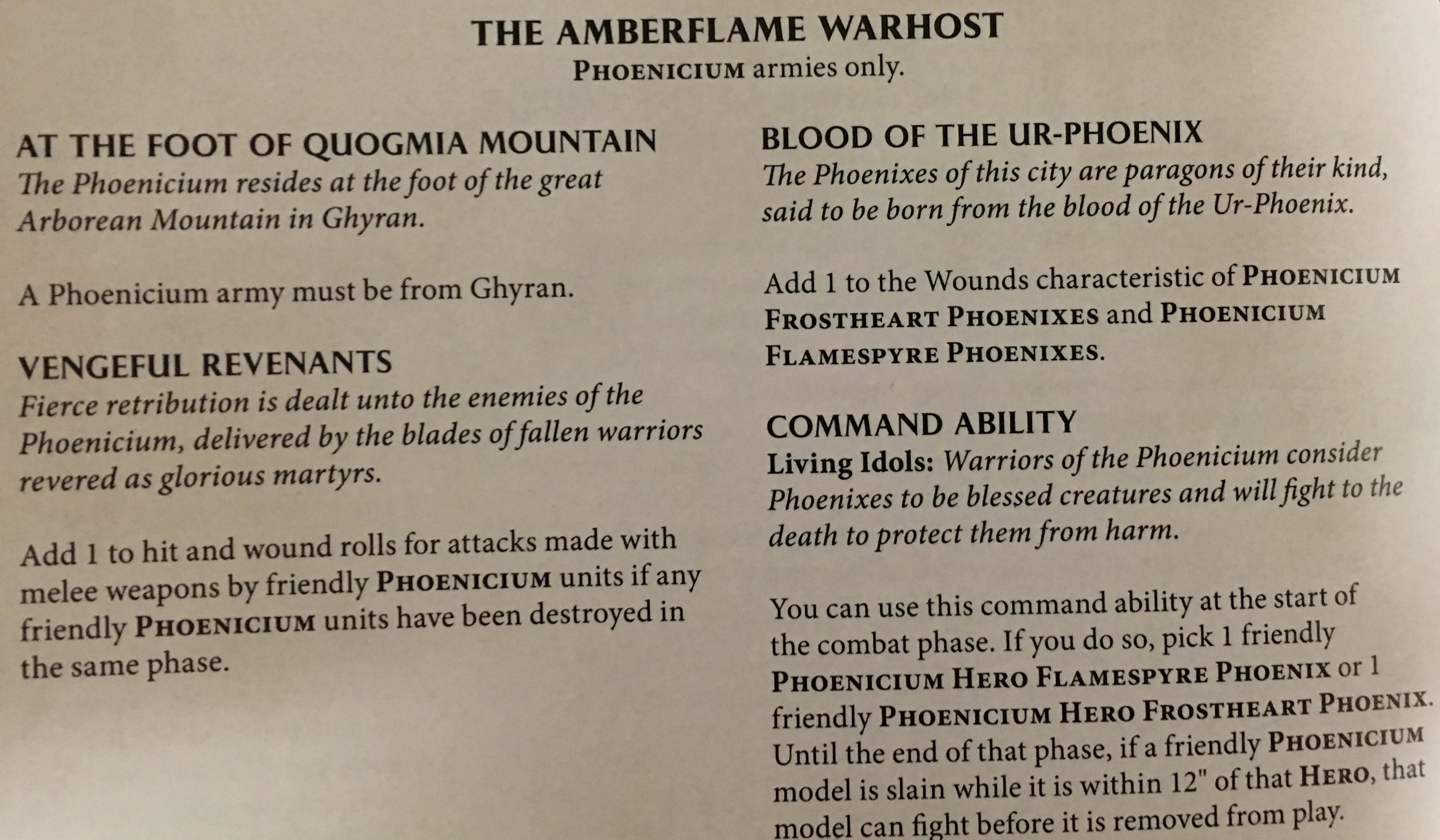 Again, the best strategy is focusing on healing I think. with a 4+ FNP on your battleline and an endless spell returning 1d6 Phoenix Guard to life, it's super-efficient. Also, the Phoenicium Spell list includes a very good healing spell: healing 1d3 wounds to all friendly units within 12" of the caster. Off course Anointed are extraordinarily useful if you plan to focus on healing attrition strategy.

The Living Idols Command ability is especially powerful, I'd love to try some Flaggellant jank or Some Freeguild Greatswords accompanying the Phoenix Squadron ^^ Even Some GyroCopters could be handy to harass, provide the +1 +1 when they die.
Outside the fact that Pheonix is incredible models, I am quite convinced you can build some very interesting Pheonicium armies!

The dark port city in the land of Aqshy. The theme here is Monster and Dark Elves Mix. A bit of everything and War hydra as Battleline. I am not sure what do do with this city, I guess spamming dark dragon hydra and Dino rider would work just fine. 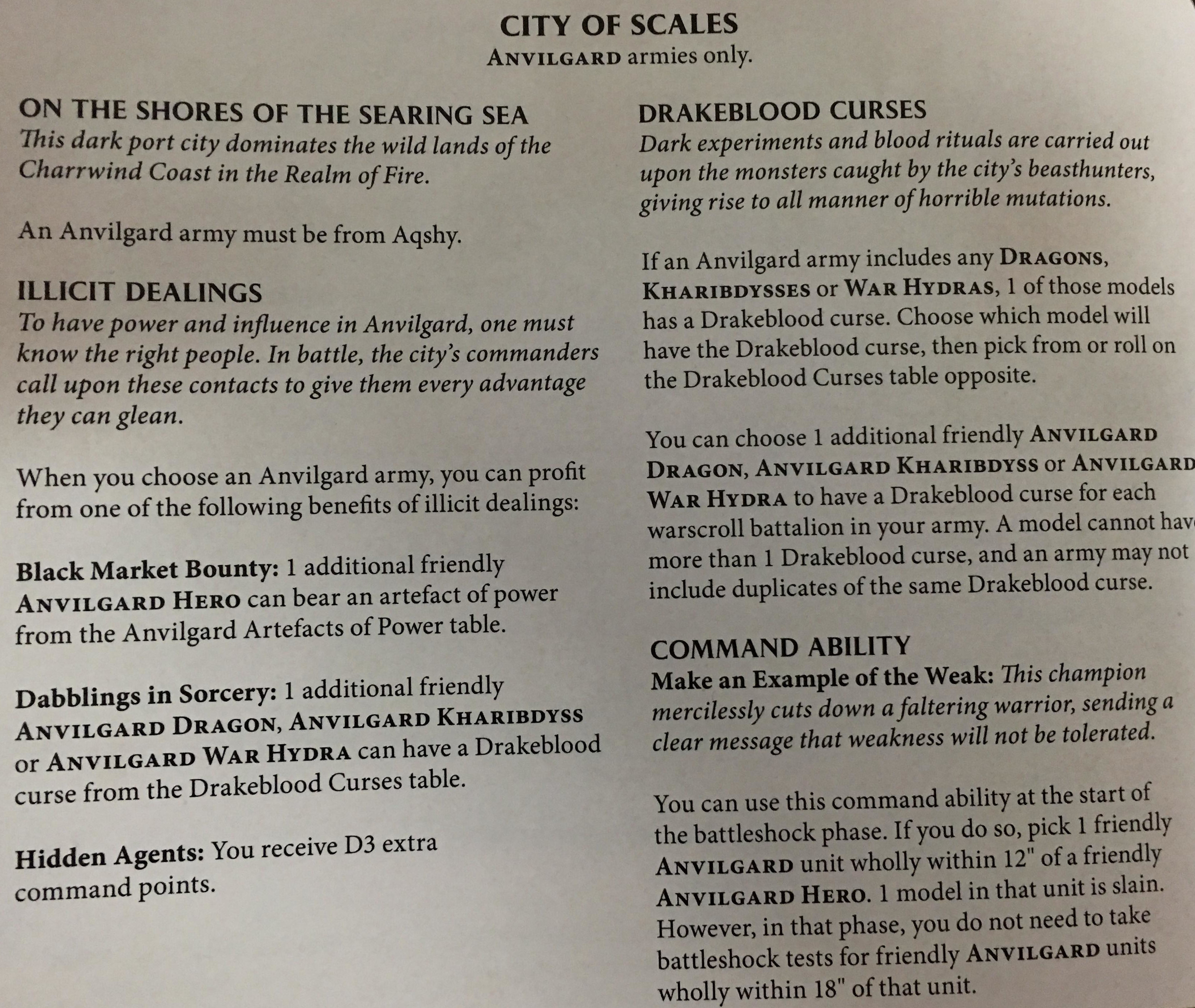 One novelty is the Drakeblood Curses, 3 different abilities that you can give to your monsters.

This City is from Aqshy as well and is the home of the most powerful spell caster. 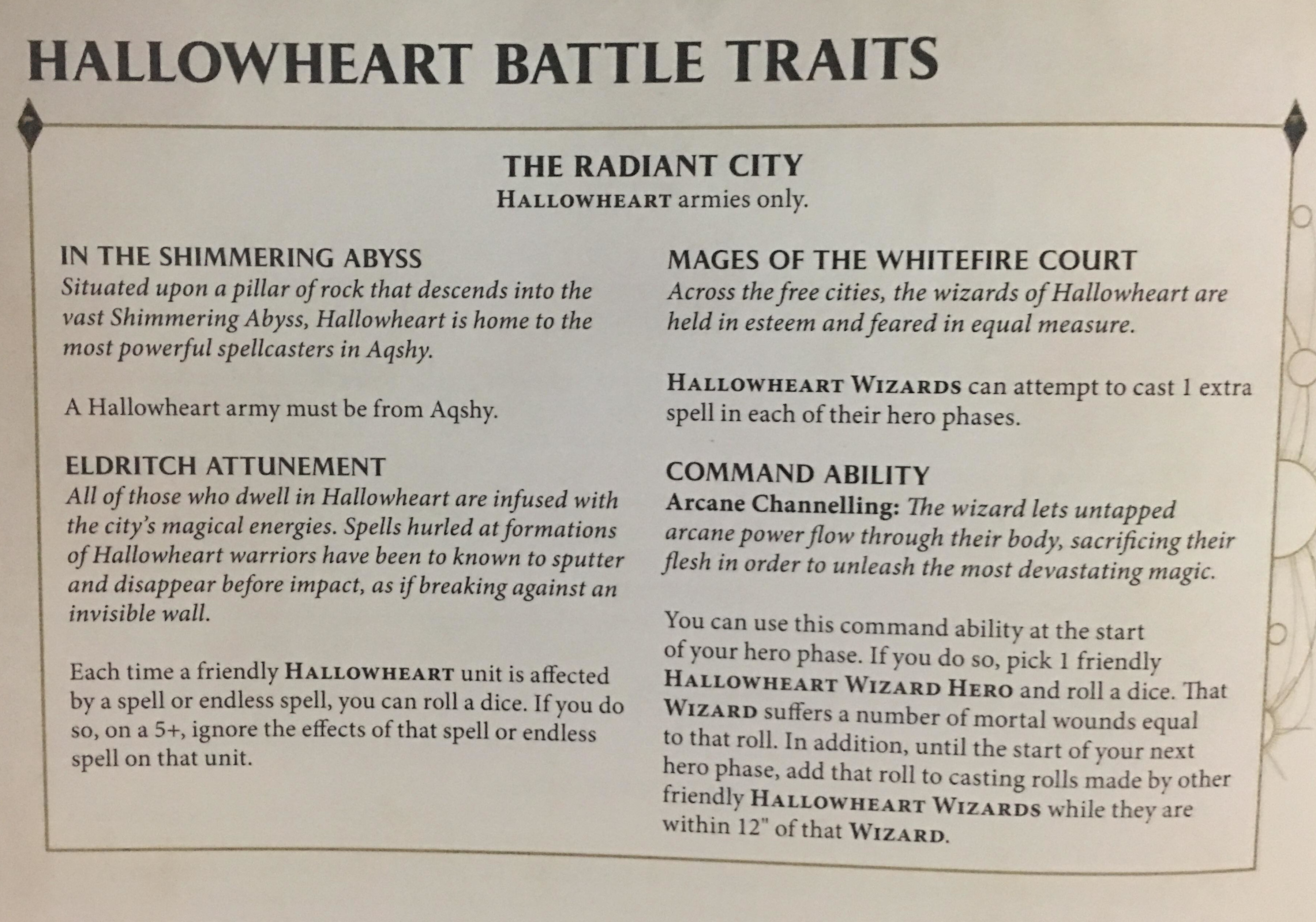 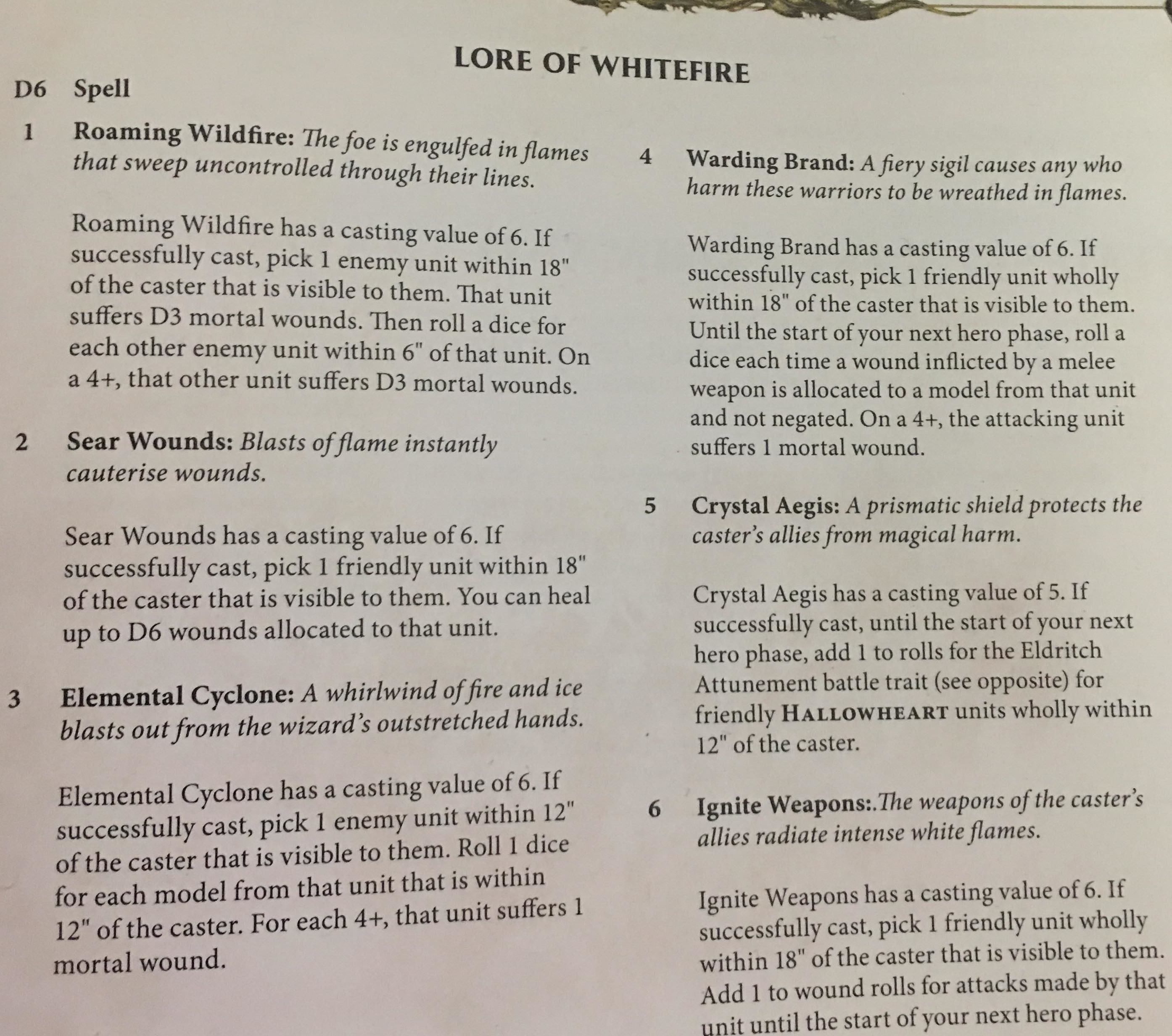 This city is a Very good meta drop against Death spell spam with the Eldritch Attunement rule that can get buffed to 4+ !! Honestly, the spell list is very very good.

The Sacrifice ability is fun too if you have a few hard to cast spells or strong magic opposition!

With the Amount of Spellcaster you can choose from in this Battletome or from the Stormcast Battletome, plus the number of endless spells or Realm Spell lists, the variations are endless ^^

At last the seventh city, Still from Aqshy and the one including Kharadron Overlord! 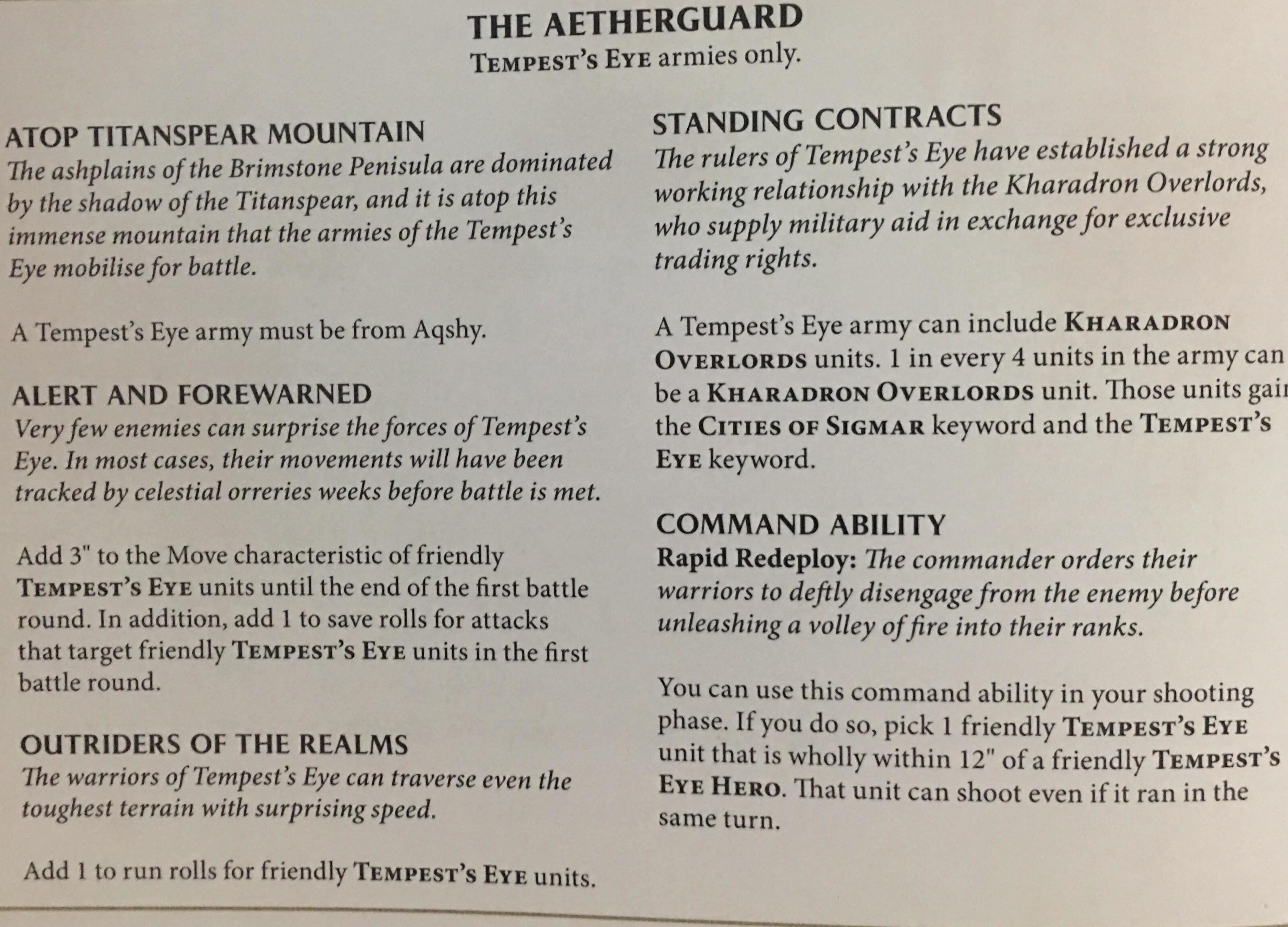 Not much to say about this one, just run/shoot or charge I guess ^^.

Still, one of their spell "Aura of Glory" give +1 melee attack to units wholly within 12". This is huge, so maybe there is something to do with some Demygriff cavalry or a pack of Stormcast Concussor.

I am sure someone shall make something super cool out of the Tempest Eyes city!

That's it for the quick review of the different cities.

To be honest I never expected Cities of Sigmar Battletome to be this enjoyable. It's hard to predict what type of army (if any) are going to be strong. There is so many choices, options, benefits, battlelines. And I didn't even talk about the traits, relics and the alliance between cities. It's mind-blowing to imagine the different armies you can build with this Battletome! I'll try to complete the review at a later time but that will have to do for now.