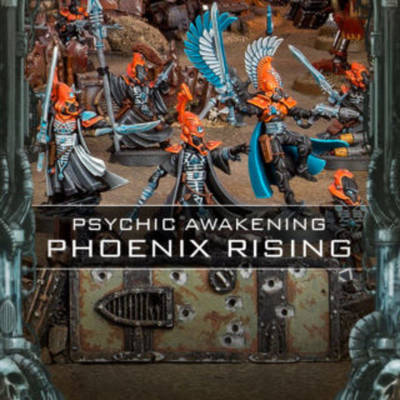 Today goes on pre-order Phoenix rising the first chapter of Psychic Awakening.
Psychic Awakening is the Warhammer 40000 campaign dealing with the aftermath of the Great Rift cutting the galaxy in two. This review will first look at the fluff and then the rules added to the differents Eldar Factions.

Phoenix rising book is 80 pages long with hardcover. The quality is normal GW so nothing bad to say. There is a lot of illustration in it (old and new) making it a very good looking object! The rule section cover both Eldars and Dark Eldars only Harlequins are left out.

To me, the fluff is the most interesting part of the book and Games Workshop hyped it quite a lot. I don't want to copy all the story in the book but here are the juicy info, skim down if you don't want to be spoiled 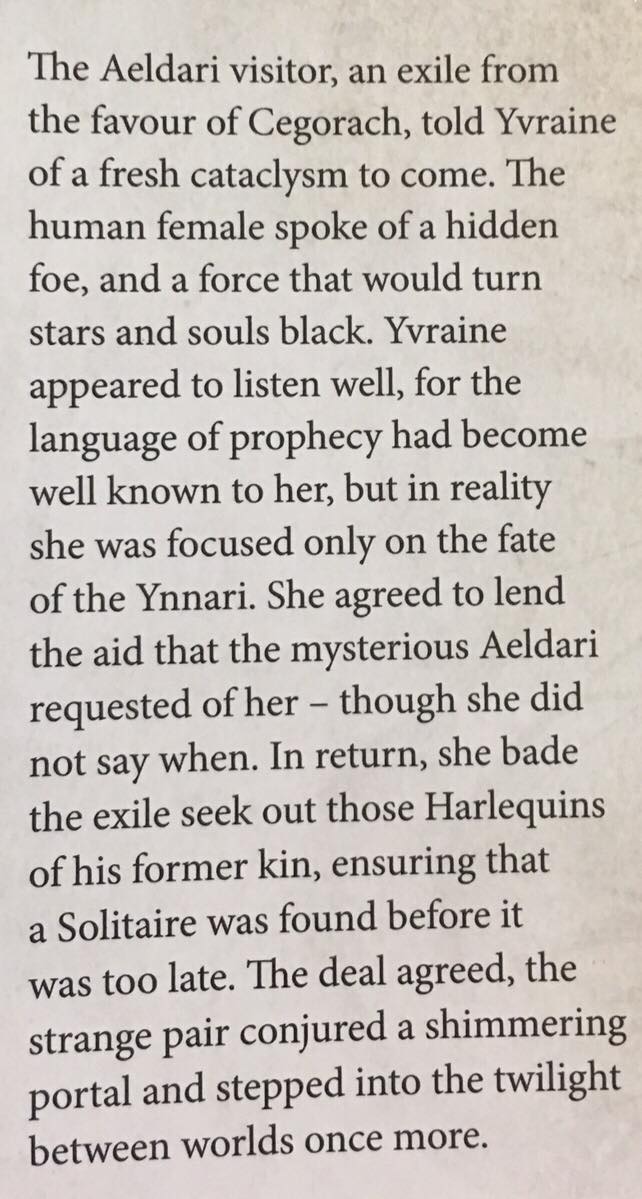 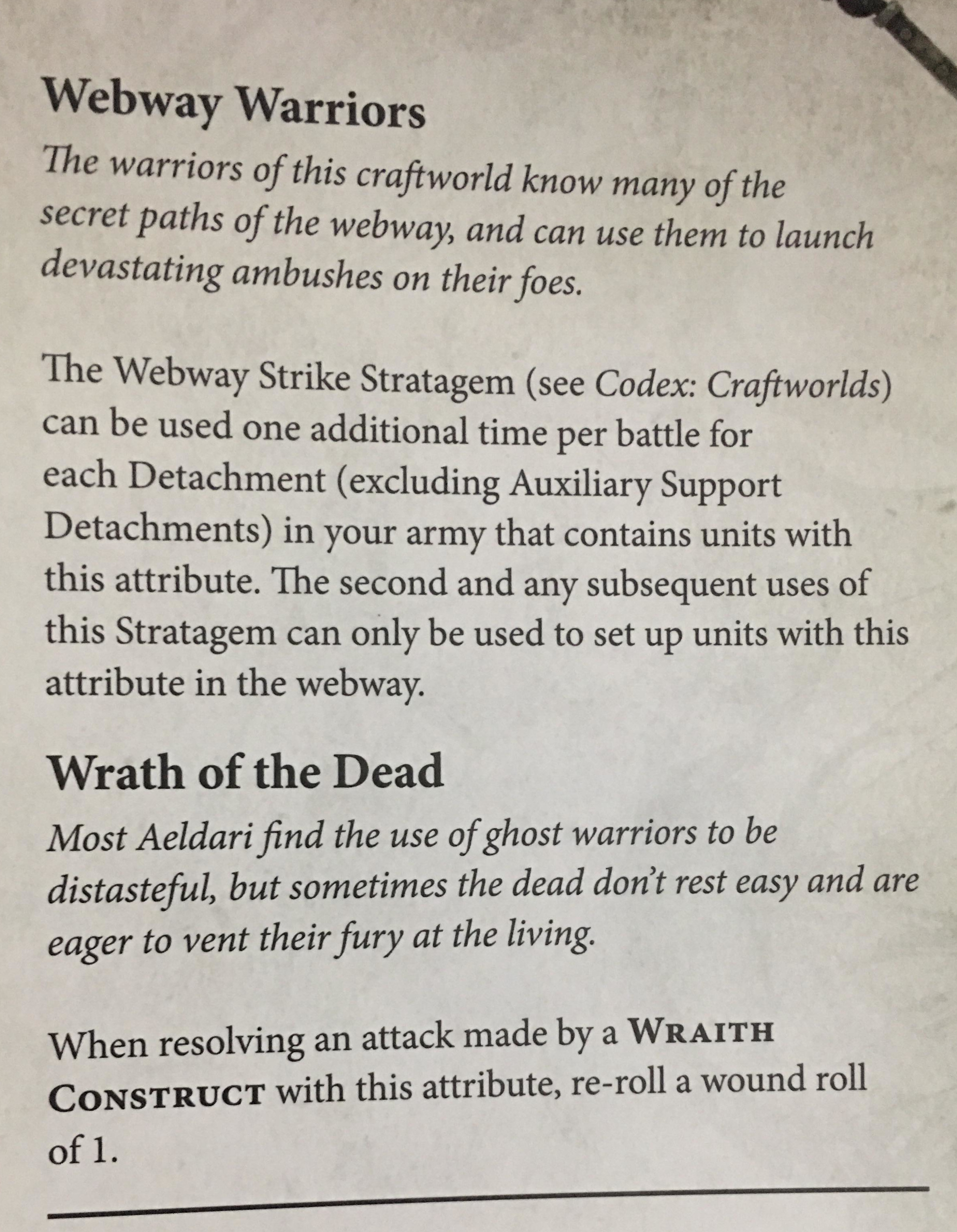 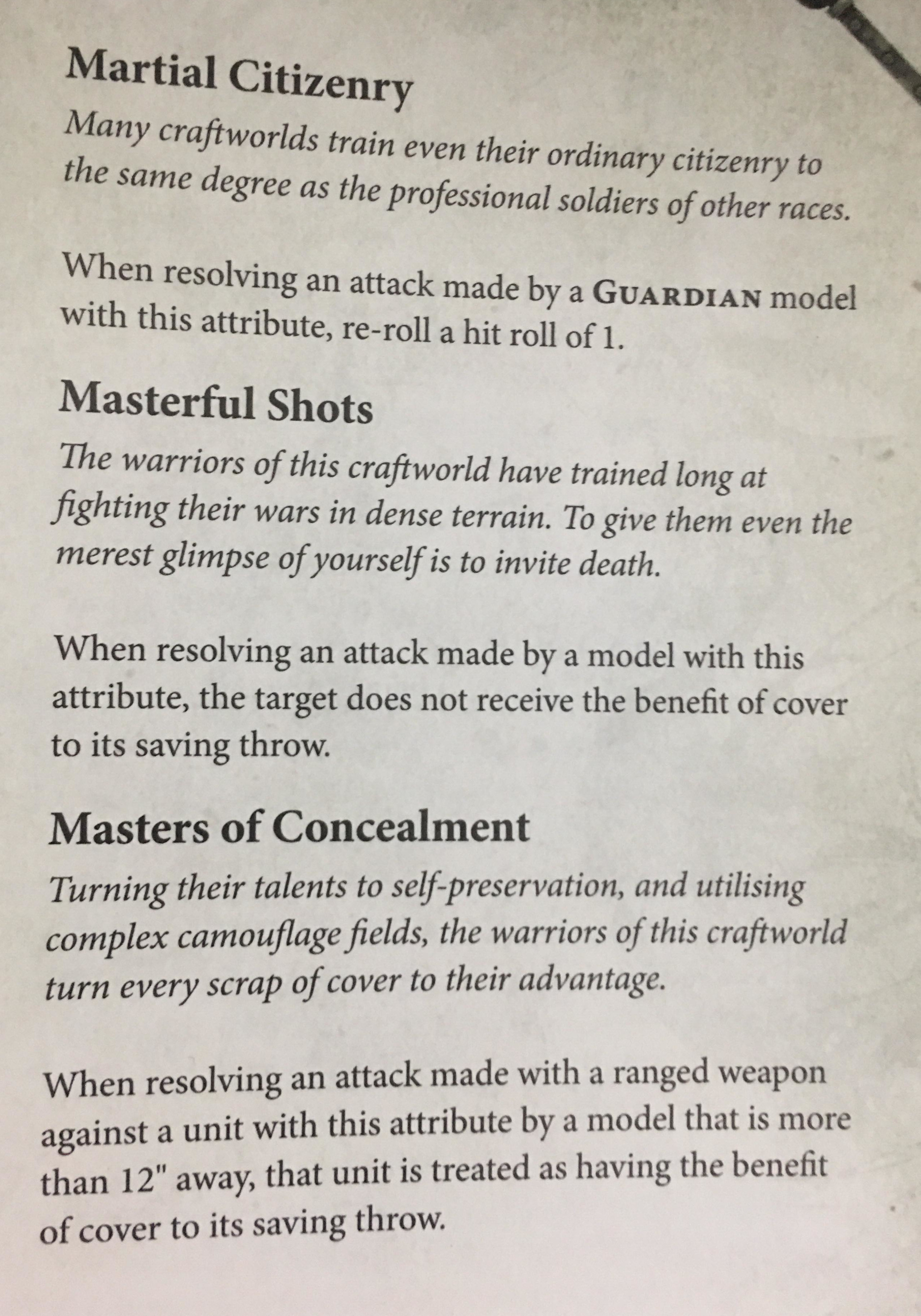 Instead of Smite, you can choose one from the table below :
-Reroll one roll
-add 2 Dmg to one psyker weapon (oO)
- Bonus + 2 charge rolls (hello Banshee !)
-Roll 3 dices on a 5+ deal one mortal wound (characters only)
-Bonus 2 for unbind spell
-Force one enemy unit to shoot at closest target unless the target is within 18" (trash^^)

Dark Eldars get updated Datasheet for Drahzar and Incubi. Like the Craftworlds cousins, they get traits to customise their: Kabals, Cults, Covens.

They are now at 16pts and 120pts. Drazhar was already spoiled and he's a beast in melee if he can connect.


There are 3 lists of 8 Obsessions to choose from and you select 2. One list for Kabals, one for Covens and one for Cults. 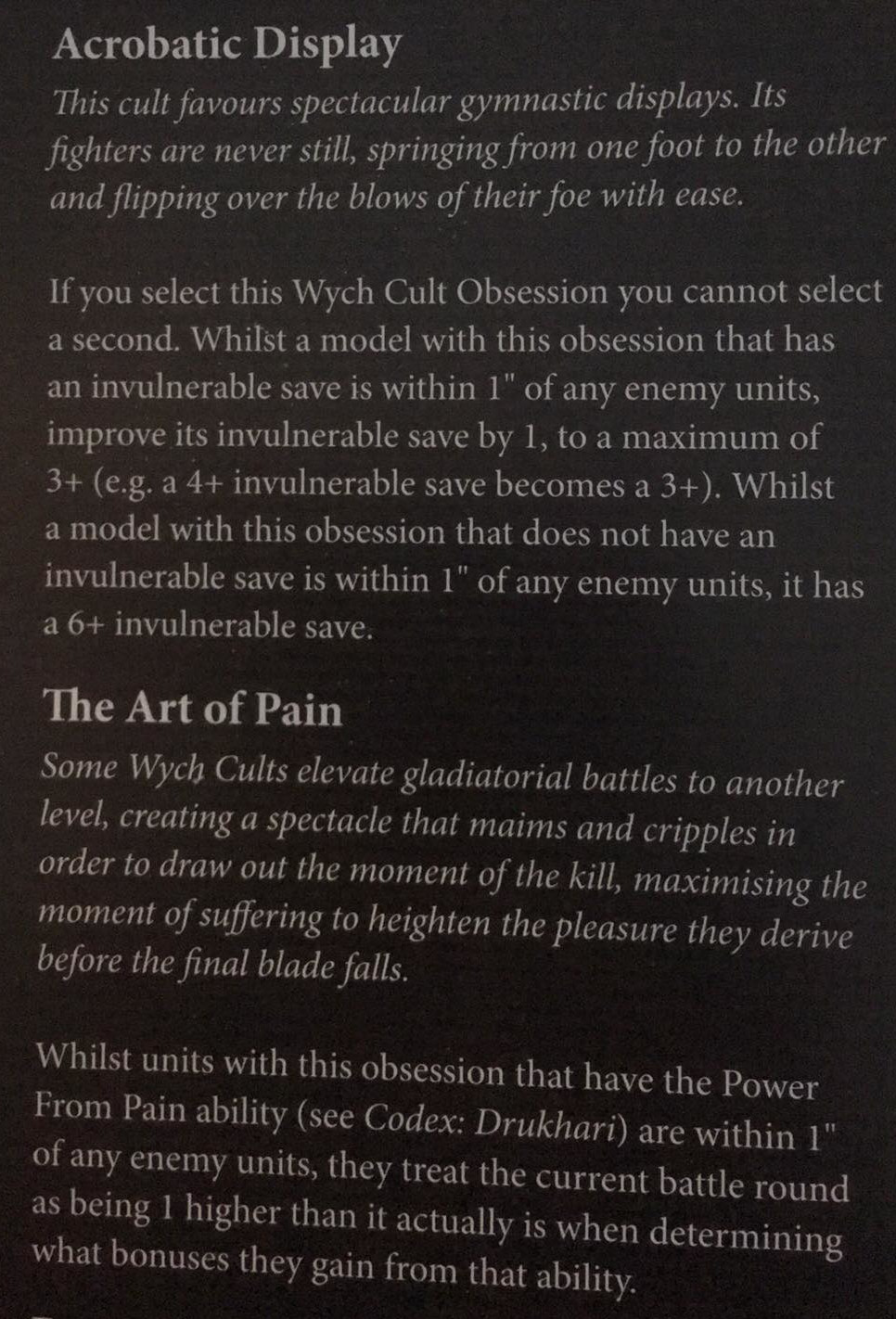 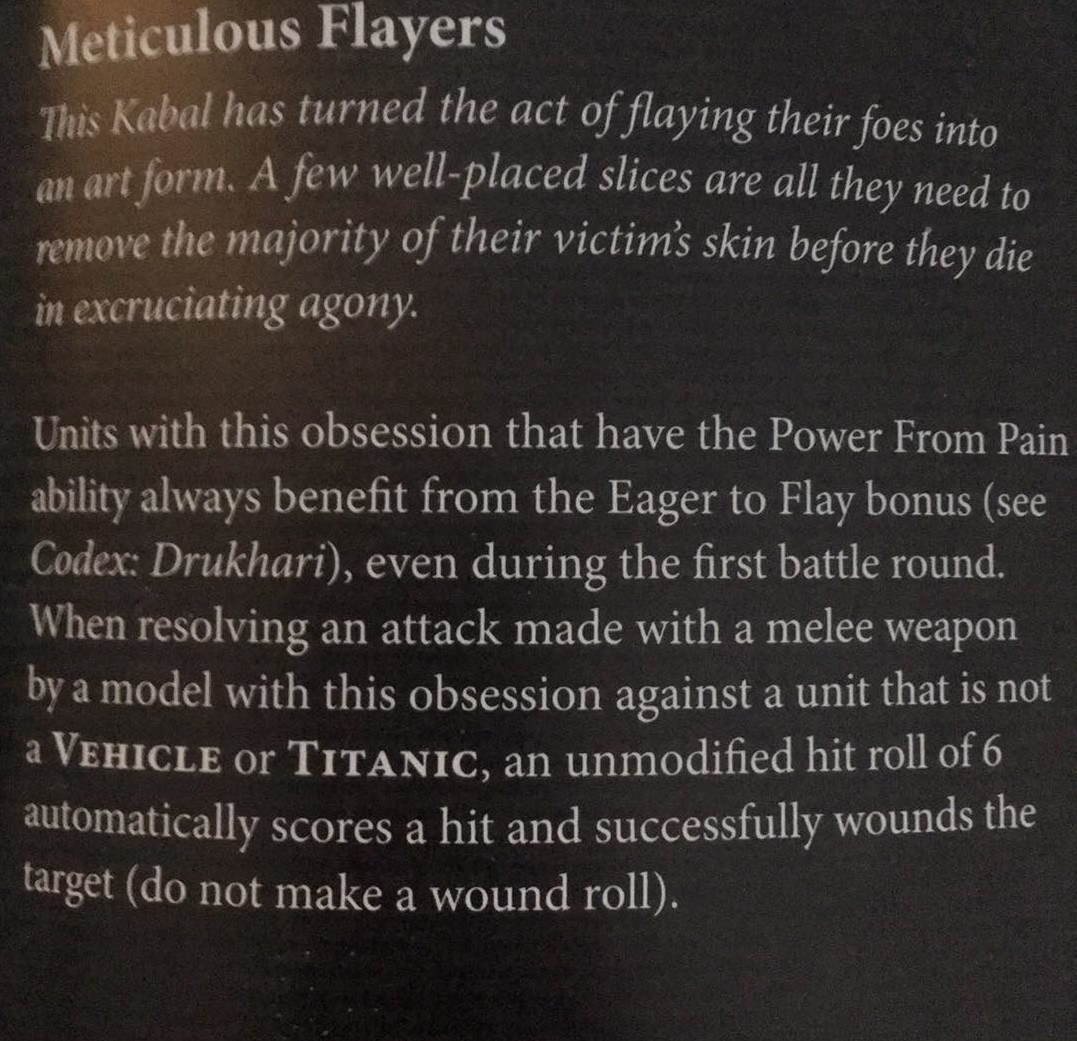 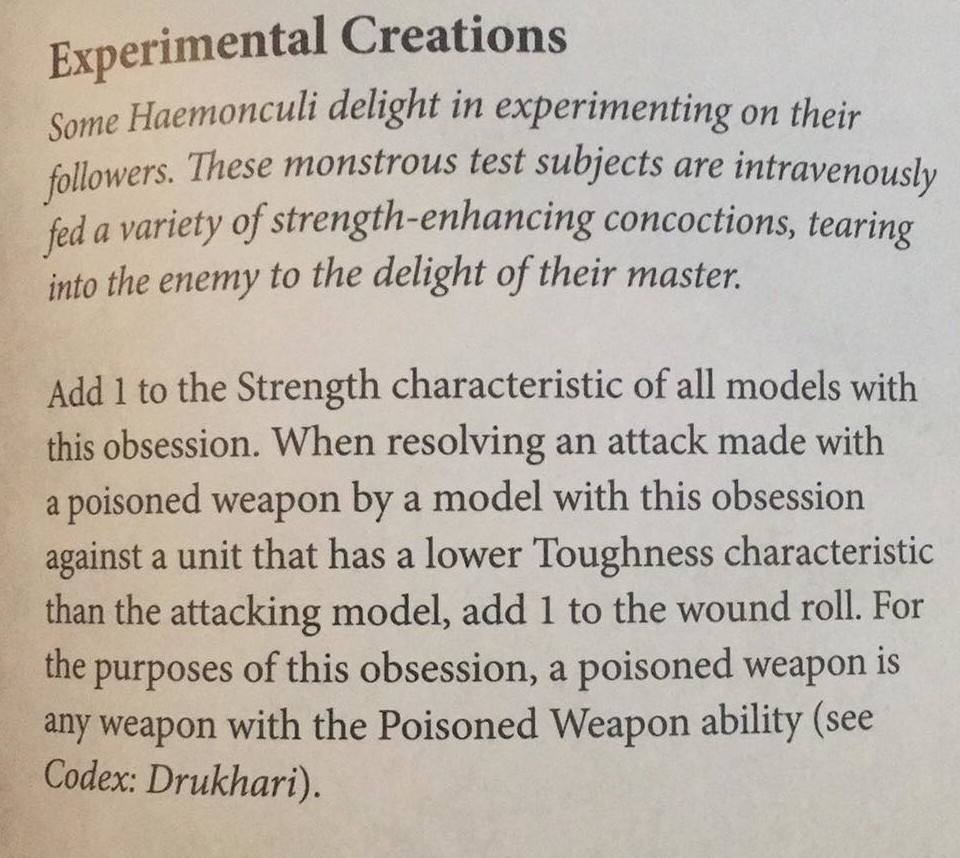 A bit of everything in these lists, still i think you'll be able to customize your force to your liking.

Children of Ynnead allow you to field a mixed force of Eldar under the banner of the God of Death! Or mix the Trio into a Craftworlds, Harlequins, Drukhari army!
The rule is so complex that I prefer to post a full image of it (have fun ^^)

Good luck with that one ^^

Decent list, Fnp5+ is interesting or maybe warden of soul to 1 A and 1 S on your general (Solitaire ?)

Gaze of Ynead : 1 , 1D3 or 1D6 mortal wounds
Storm : 3d6 per enemy psyker around on a 6+ 1mw
Word or the Phoenix: Heal D3 or revive one model on a 4+
Unbind Souls : Debuff one target unit, reroll wounds against it for friendly Ynnari
Shield of Ynnead 5++ for units within 6" (ho yea!)
Grace : Buff, target friendly unit reroll 1 to hit.

Gaze, Shield and Unbind souls are very strong and will help a lot.

The Ynnari army looks interesting but to be honest, my Eldar List Building is quite weak. I have no idea on how to build an Eldar army (except Flyers spam of course ^^)

That's all for the review of this small campaign book. It is a must-buy if you play Eldar and still quite a good read if you are interested in the fluff.

ps: There is very little fluff in this book about Drazhar and Jain Fight. So I don't know if she was raised from dead by Yvraine if she won or if the fight was interrupted and the fluff didn't progress (like usual ^^)