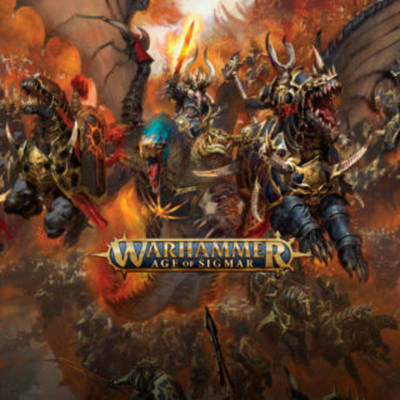 Sadly due to the powers of the Chaos gods, my Slaves to Darkness Battletome review was lost in the warp :(. Having to start over this morning I'm going to change the review format and do it in 3 or 4 smaller posts.

Then Let's starts with the Warscrolls and points !! In the Slaves to Darkness Battletome, there are a lot of Warscrolls, most of them were changed. Also, Points for most of the units were also modified. A few recent warscrolls coming from Warcry were also added.

So let's starts with the Lords !!!

Lots of modification and a few new entries here !!

Off course I have to start by the Destroyer of Worlds (or not if i account for the recent Old World Announcement). Anyway, Archaon is the boss, he was previously in a very small battletome and was sad to be alone :(
Now is back as the big Slaves to Darkness boss and he delivers the pain ! 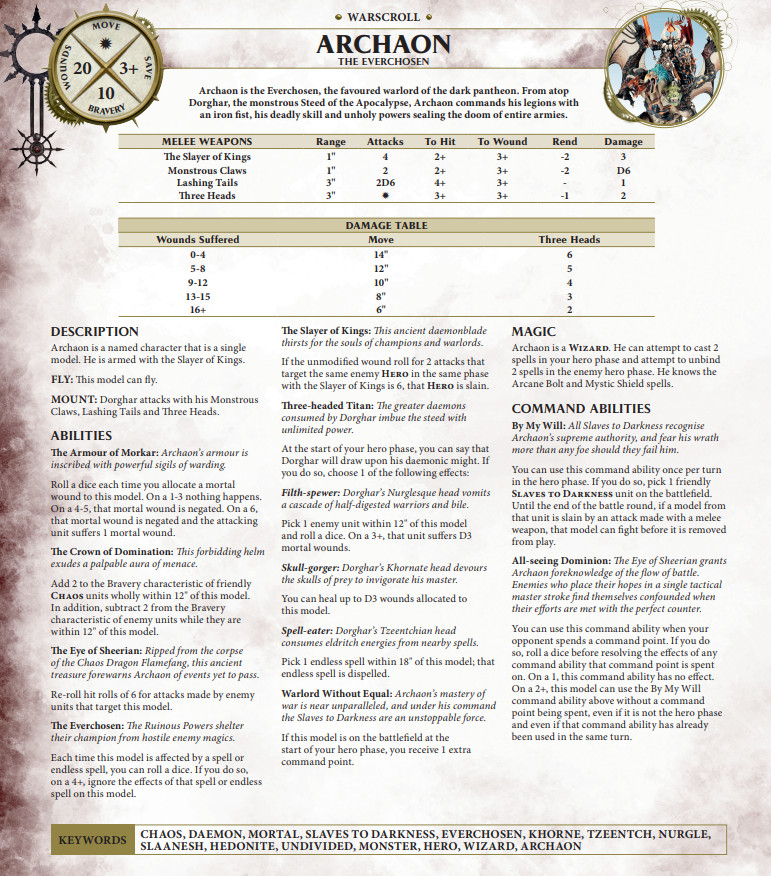 Change on his Warscrolls are interesting and his points went up a lot !
He's now perching at 800 points !!


Command Abilities
he has 2 but they work in duo ^^. By my Will is range less and allow one unit to fight when a model is killed (even if he already fight).
All-seeing Dominion is triggered when a command point is spent, you can spend one and use this command ability, and on a 2+ you get a free By My Will. A bit risky buy allow you to react during the opponent turn.

Yea Archaon is now a Monster and that is without talking about the new allegiance abilities offered by the Battletome. But he gets to choose one Chaos marks. Khorne make him reroll1 to hit and +1to wounds for exemple. He can also lead his own Sub Faction (and he should). More on this later...


They are no lords but as they follow the steps of Archon ^^ Now they cost 300 for 3 (+40pts). only change concerned Daemonforged blade, now deal one extra mortal on a 6 to hit, lost one attack and wound on 3.
Ho yes ! now they choose one mark before the battle so you can have them for example as Khorne and if they are wholly within 12" (or 18") from Archaon they reroll1 +1 to wounds added to the +1 to hit they have if his on the battlefield.
They are a lot more solid now if you play them in Archaon Faction you can select from which Circle they come from and they get an extra power. Still 300 for 3 is steep ^^

Big new thing is that he can auto summon one unit of daemon or 6 furies once per battle. he gained one life, he spell was altered and deal one mortal on a 5+ and you roll for each model in the unit.
Alas he went +80pts now at 260. But the summon is a very good options


Now at 280 points (+30) , still have all the weapons options. Daemon Blade rend was improved by 1, his lance goes to rend -2 Damage 3 on charge. The Manticore was heavily buffed with +1 to hit, +1to dmg, better wound table with increase chance to wound and more tail attacks. Also Claws reroll to hit against monster regardless of table half.
Only nerf is the Command Ability that lost reroll Save.

+60 points (260 now), Same change to the Manticore.
Orricular vision buffed to reroll all saves roll (and not only one) but ranged is the wholly within 12" (Ho god i hate this wholly within shit)
Still only a lvl 1 mage :( but Win of Chaos is so powerful now, range 18"and eat large unit !!!

up by 30 pts to 70 now, gained one wound and his regen ability was changed. 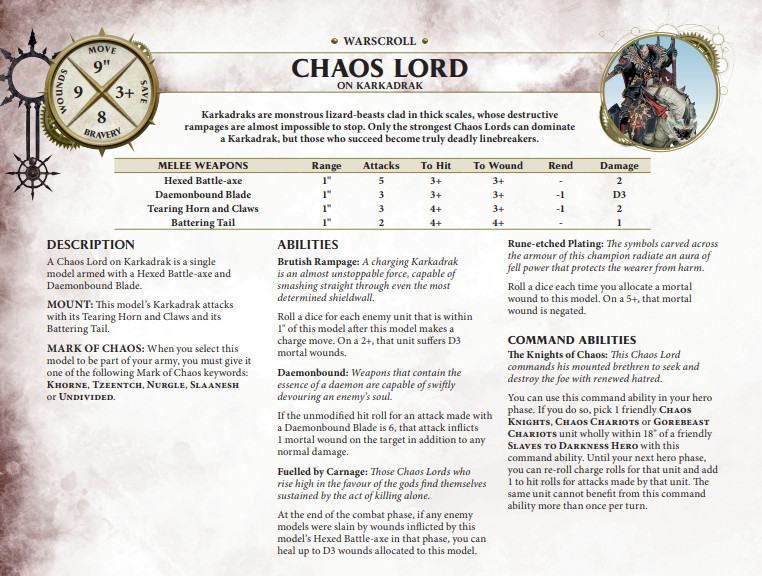 New lord of Chaos from the Slaves to Darkness Star Collecting, Honestly super expensive at 250 pts !! but the amount of attacks he makes is great and he can deal D3 mortal wounds on multiple units close by. Still he's kind of slow, with only 9 wounds...

Only 110 pts now, gained one wound, lost the one per battle reaper blade attack.
But he gain : a strong attack profile fitting a Chaos Lord, a very strong fight again command ability, still hindered by the wholly within 12" but you can use it more than once per combat phase and not only during your turn. !!! Combined with by my Will from Archaon you could attack 3 times (4 with Varanguard ^^).
Very good choice now !!
Still i am not sure of his weapons options is it reaper blade + Steel or Flail or is it reaper blade + Steel or Flail Alone ?

ALERT: This is the new King of Support! Costing 110 points now. Grant the Orricular Vision to reroll all save and Daemonic Power spell grant reroll to hit and wounds.

Bad points : Have no use as an allied now :(, can't use it on daemon prince and Belakor :( 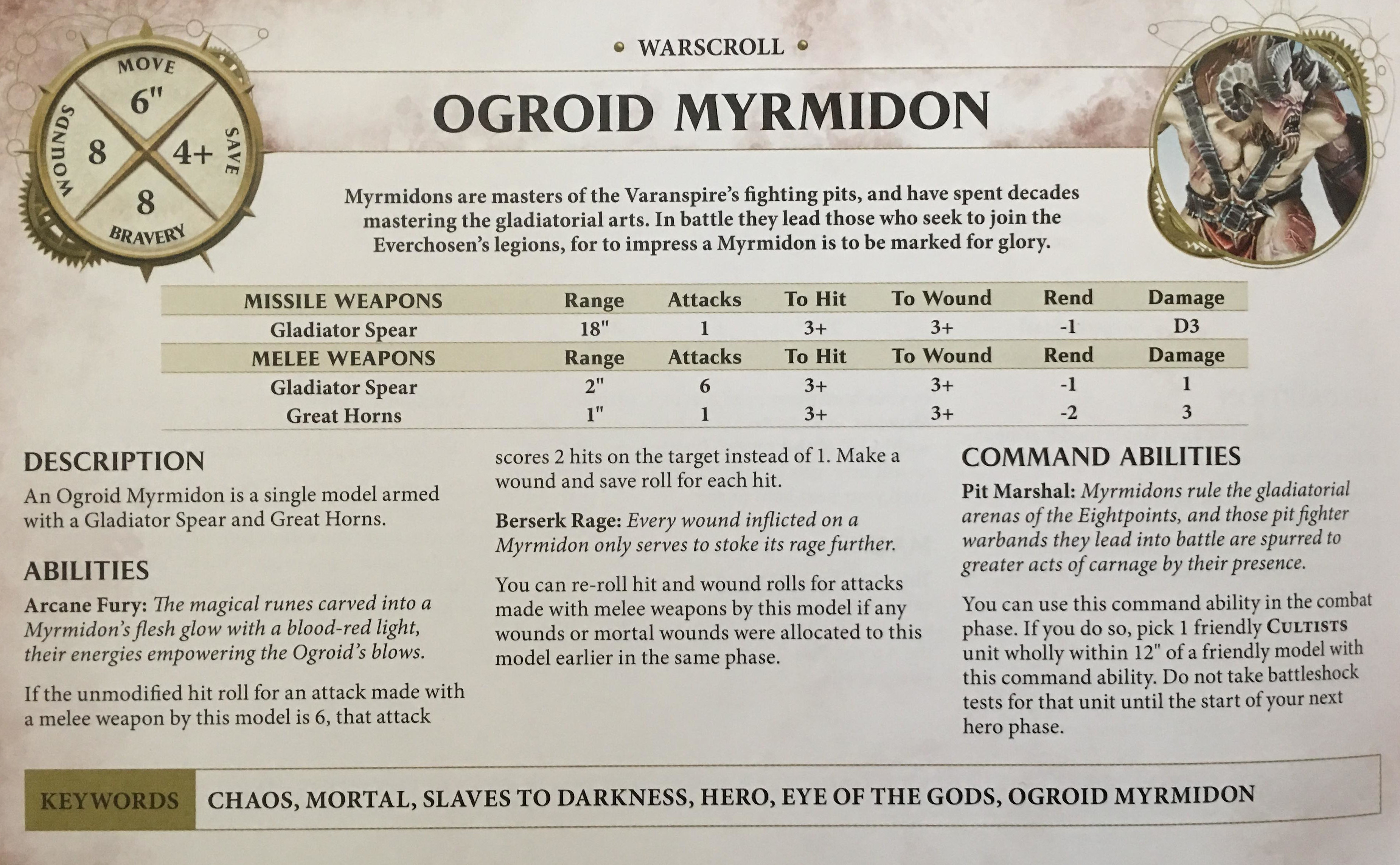 Cute new choice, 140 points is expensive but protect cultist from Battleshock ...Model is awesome starts are so so :(

Lots of new toys for the Daemon prince, +1 to hit on the charge, Hellforged blade Buffed, fight first, Command Abilities based on the god. At least now there is a point to transform someone in a Deamon Prince!

Queen gets an incredible threat range extender on Cultist and Marauders +3 to charge roll is ridiculous !!

Chieftain gets a weakened by my will that works only on Cultist and Marauders.

At least we have 2 extra Heroes if you want to play marauder and Cultist. They both cost 90pts (+1)

Ok that's it for lord and heroes now let's take a look at the Units!

Small points increase (+10) he's now at 170. Aura went in wholly within Wording (behh) but the starting range is 18. Prayers were buffed A LOT, attack stat line of the Sacrificial blade is now very good (like super good !)
It's a win !!!

Both were buffed but their points skyrocketed they are now at 120 and 150 !!! So yea they move faster (+4" or +1") deal 2 damage with Chaos Greatblade, more reliable Mortal wounds on the charge...
Gorebeast lost the double attack on 8+ charge ...

Glorious new models, 180pts for 5 (+20pts), new weapon option with for champion with Cursed Flail. Ensorceled weapons got a much-needed buff with +1 to wounds and -1 rend. Lances have the standard 2dmg rend -2 on charge but only 2 attacks.

Buff everywhere and the price is now 100 pts for 5.
+1 bravery, +1 to wounds on hands weapons, +1 to hit on halberd, paired weapons is rerolling all attack and not just one. Same if you 10+ models you can reroll save ! Nurgle chaos warriors in a cover with altar super going to be super popular ^^ with 2+ RR save ^^ and 6+ fnp

Also, they now have Boundless Ferocity: On a charge transform the lower dice in a 6 ! WTF? minimum charge is now 7 , average is 10. Stacking the Darkoath warqueen grant +3 threat range for a whooping: move 6 + charge 13 ! with +1hit, -1 rend. add a bit of buffing and they are super scary now (also you can summon some now)

Less buff than Marauders on foot but they are quite good at 90pts for 5. in a group of then, they have a decent ranged game with 3+ 3+ rend -1 and 24" threat range.

Same points cost the same rules. Honestly compared to Marauders why bother, they don't even get Chaos Mark. Unless I missed something it's incredibly poor integration.

Spire Tyrants could be Marauders for all I care, they cost 70pts for 9 models so it's more than Marauders ^^I must be missing something! 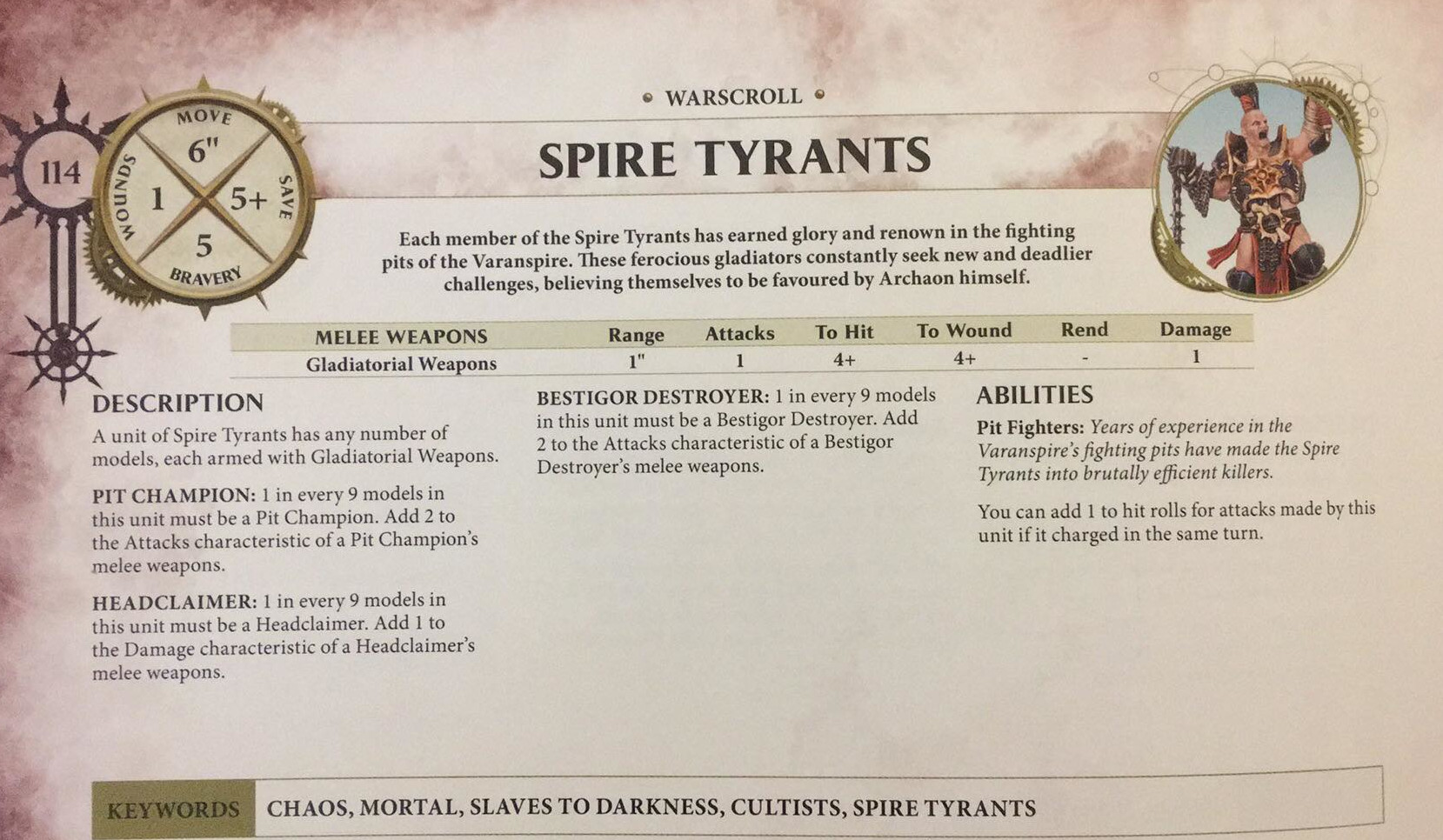 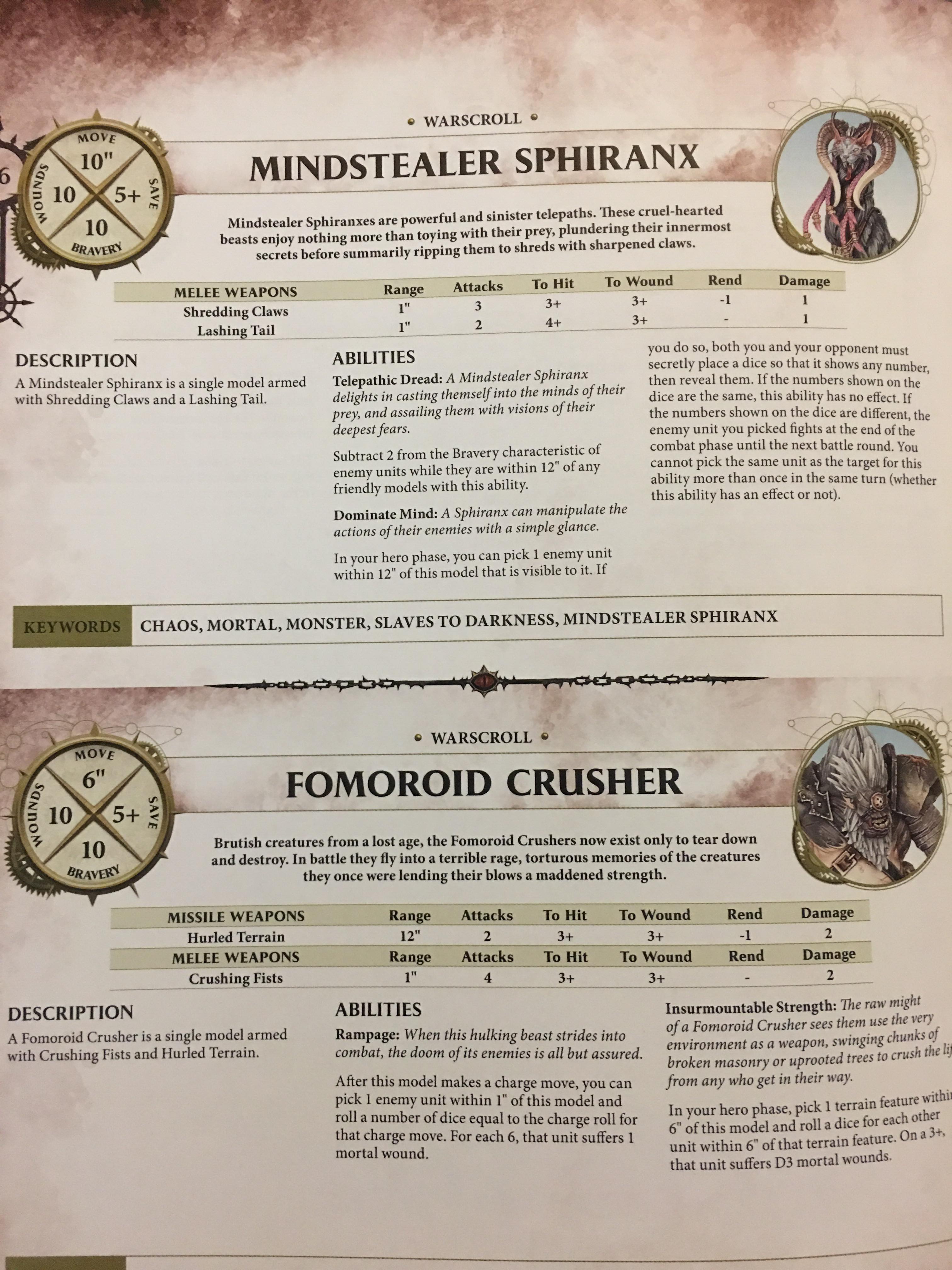 That's it for the Warscrolls and points review. I am very disappointed by the Warcry / Cult rules why even bother? On the plus side Iconic Slave to Darkness, units are strong, marauders, warriors, knigts are all super good choice. The altar is incredible, lords are good... If you ignore Cultist it's brilliant Battletome.

In my next post (this afternoon) I'll do the Allegiance Abilities and the Spells !!