Age of Sigmar : Slaves To Darkness Allegiance Abilities and Spells 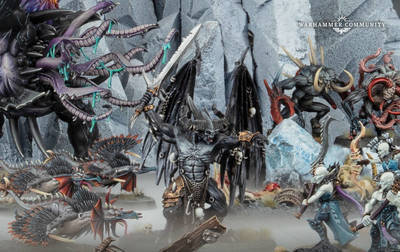 Part 2 of the Slaves to Darkness Battletome, you can check the first part here if you want.

Slaves to Darkness Battle Traits : There are 3 of them, the first one is simply the obligation to choose a sub-faction, the Aura of chaos is buff aura based on the Chaos Marks and lastly eye of the gods is the road to Daemonhood during a battle. After Battle traits, we'll check the spell list granted to Slaves to Darkness

There is 4 sub-faction to choose from, and you must choose one of them, gaining the corresponding Keywords.

Note : Some Warscroll may have already a different Damned Legion Keywords. In this case you can still use the unit but can't apply the bonus. There is a lot to say on each Legions so i'll keep it for the next post.

Older Warscrolls had the Mark Of Chaos already included and you could choose one effect depending on the God. Now it's an army-wide rule.

Each Slave to Darkness heroes in the army has one of the following Aura. Each aura has a first power and a second if you are the general. 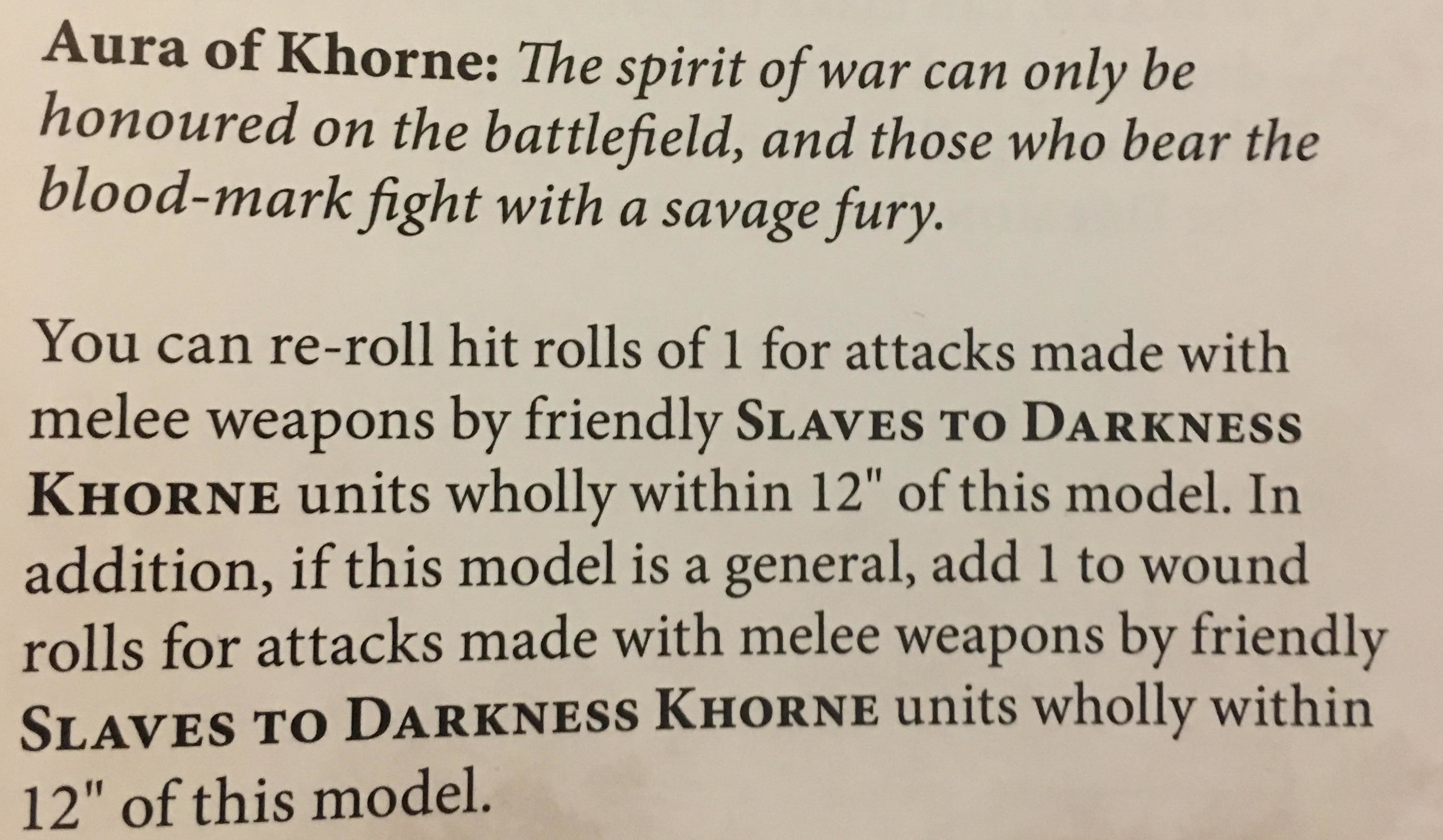 Maybe the strongest aura, reroll 1 bubble on every khorne hero and +1 to wounds bubble on the General is tasty. Off course the Wholly within shit is hard on a 12" ae :( 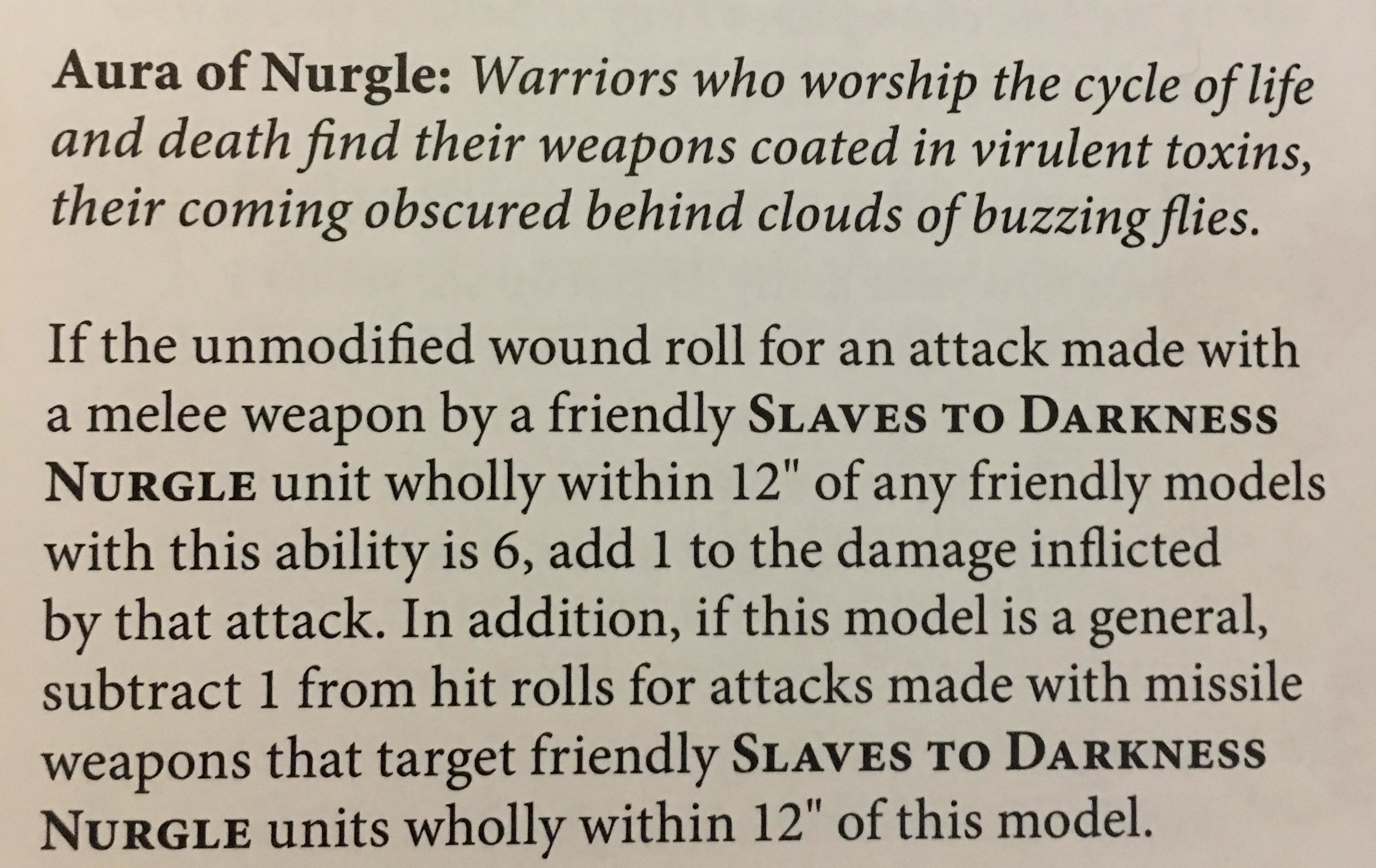 For the general it's more meta dependant Aura, having a -1 to hit bubble against ranged is interesting if you need it.
The +1 wound on a 6 when rolling wound is good if you have a large volume of attacks. 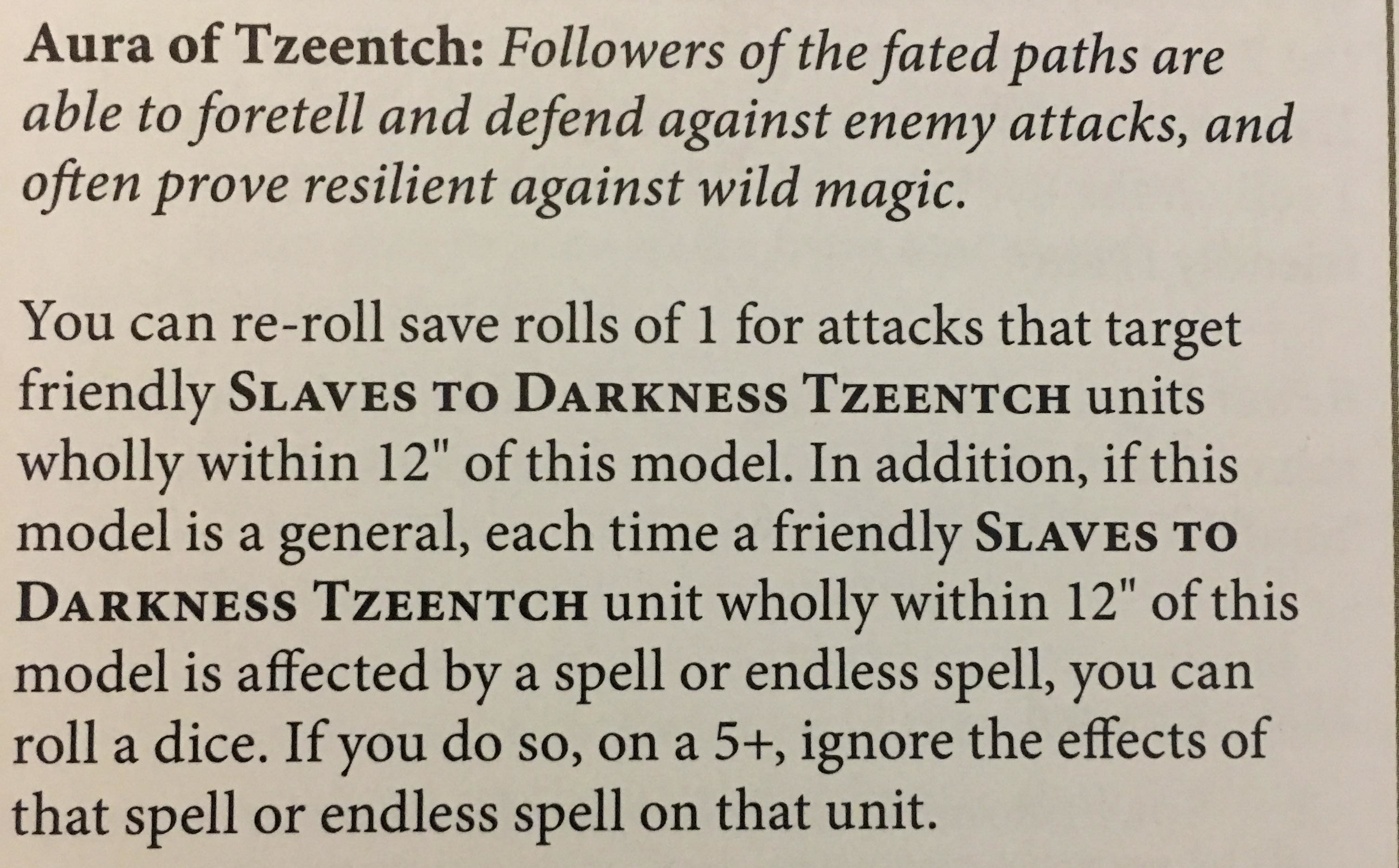 Again the general aura depends on the Meta but between Cities and Nagash spell spam, it's good.

Reroll save roll of 1 is ok, not great considering the number of way to can reroll save in the army but still it's solid. 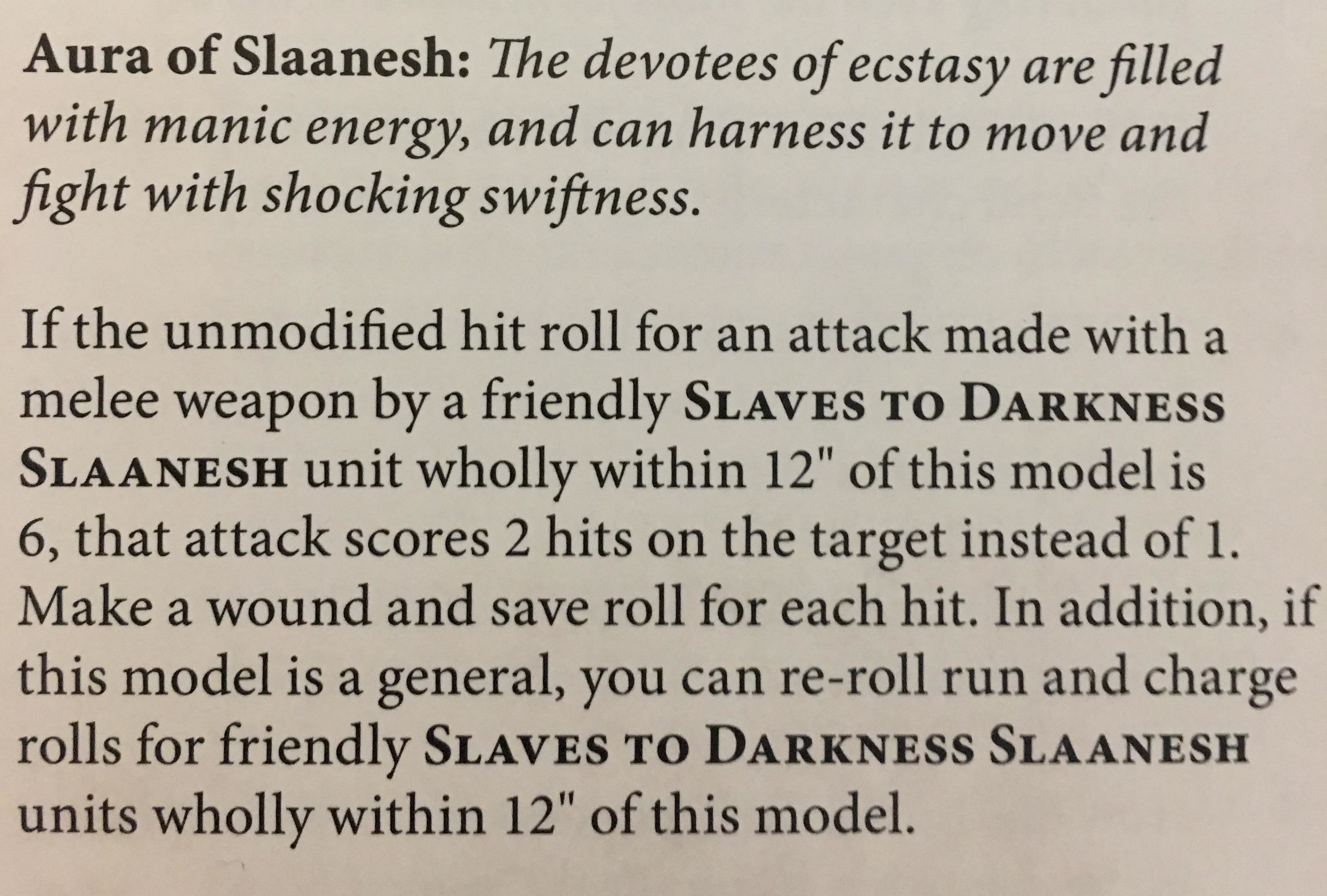 Slaanesh Daemonette aura for everyone wholly within 12" is cool especially if you have high-value attacks, like Archaon, for example, ^^ or Lance during a charge. Reroll charge is a very good ability and having an aura bubble is going to be useful. 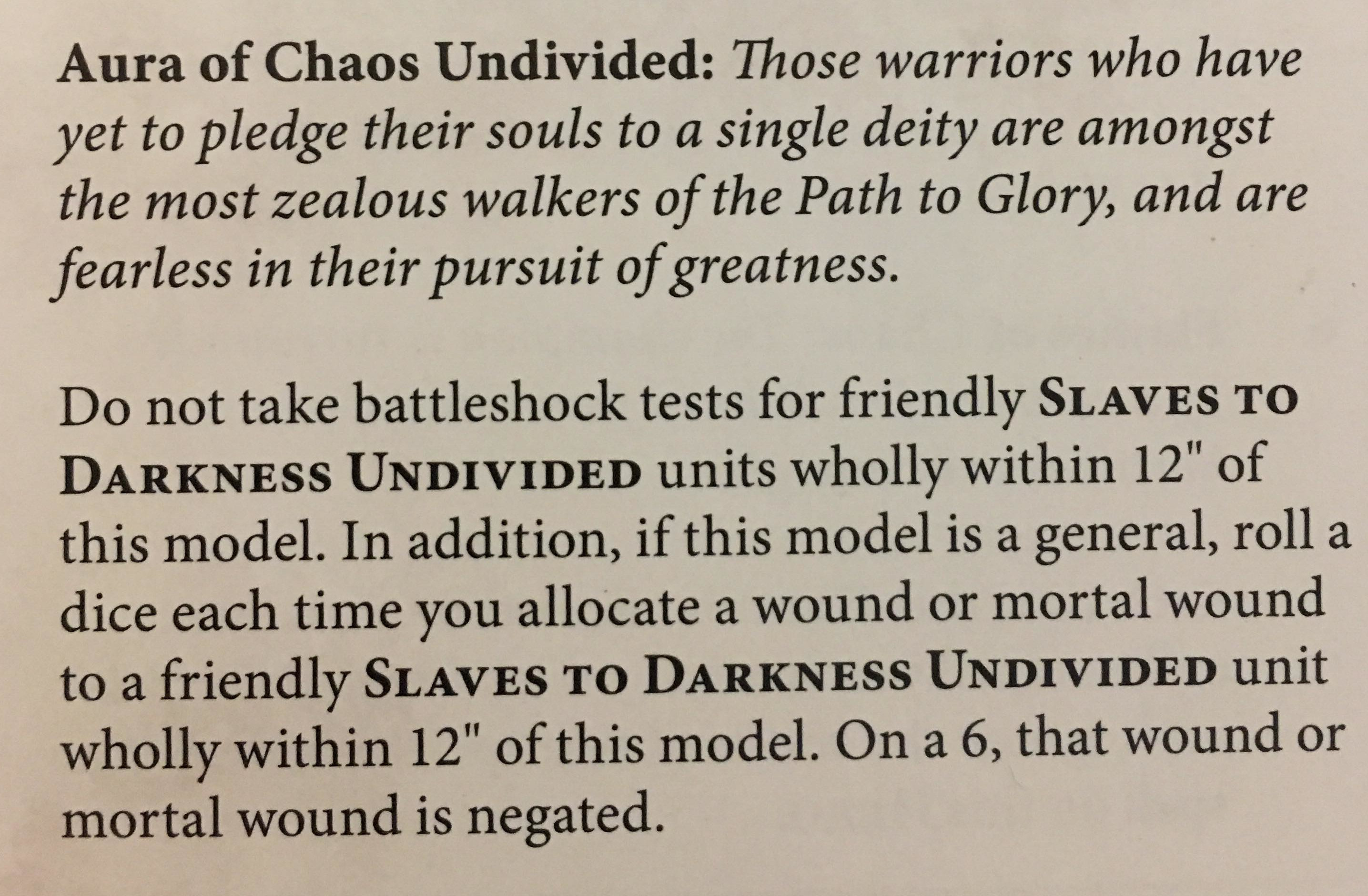 Wow not bad, Immune to Battleshock test for Heroes aura and FNP6 for the general and wholly within 12".

Eye of the Gods

Eye of the Gods is the Chaos Rewards mechanism. It's funny I still remember the gift cards from the Chaos Box from Warhammer. Ho god, i loved these. Anyway, each Era had some sort of mechanism.

Apply to heroes with Eye of the Gods Keyword. That all the heroes but Archaon and Gaunts. If you slew a hero during melee phase at the end of the phase you roll 2d6 and check the table

Honestly, the rewards are very good !! Good enough to justify that you hunt enemy heroes with your own! Sadly roll of Seven and duplicate will give nothing :( Still it's a very good rule if you remember it during the heat of the battle ^^

Spell Lore : Lore of the Damned

6 Spells, each wizard can choose one from the list. 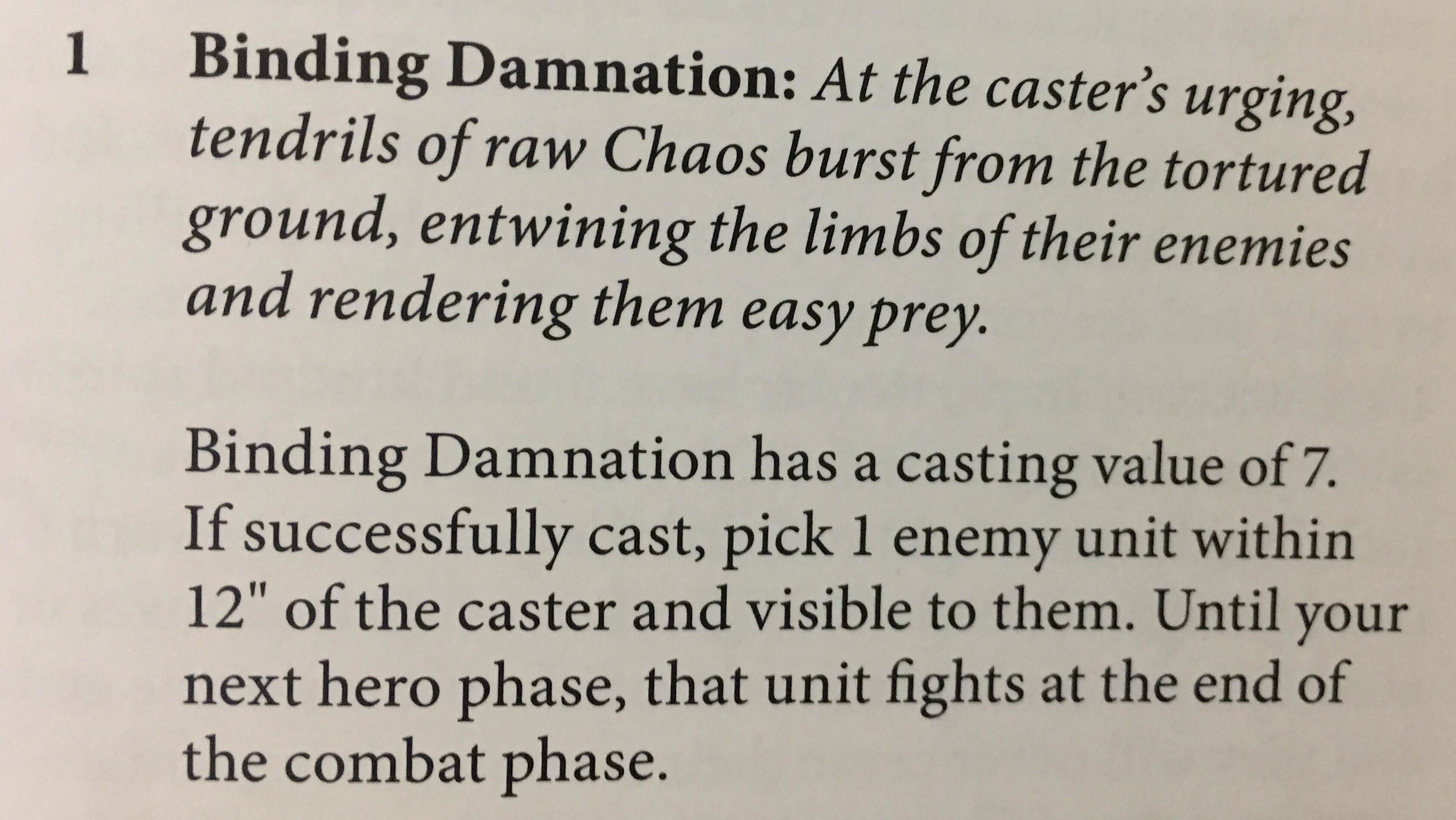 I think it's the most important spell you can have. In a Varanguard force, you can use the double or even triple pile in focus a unit to death. Same for hunting heroes.. Must have! Still, it's a 7 to cast so you are going to need some set up to pass it. 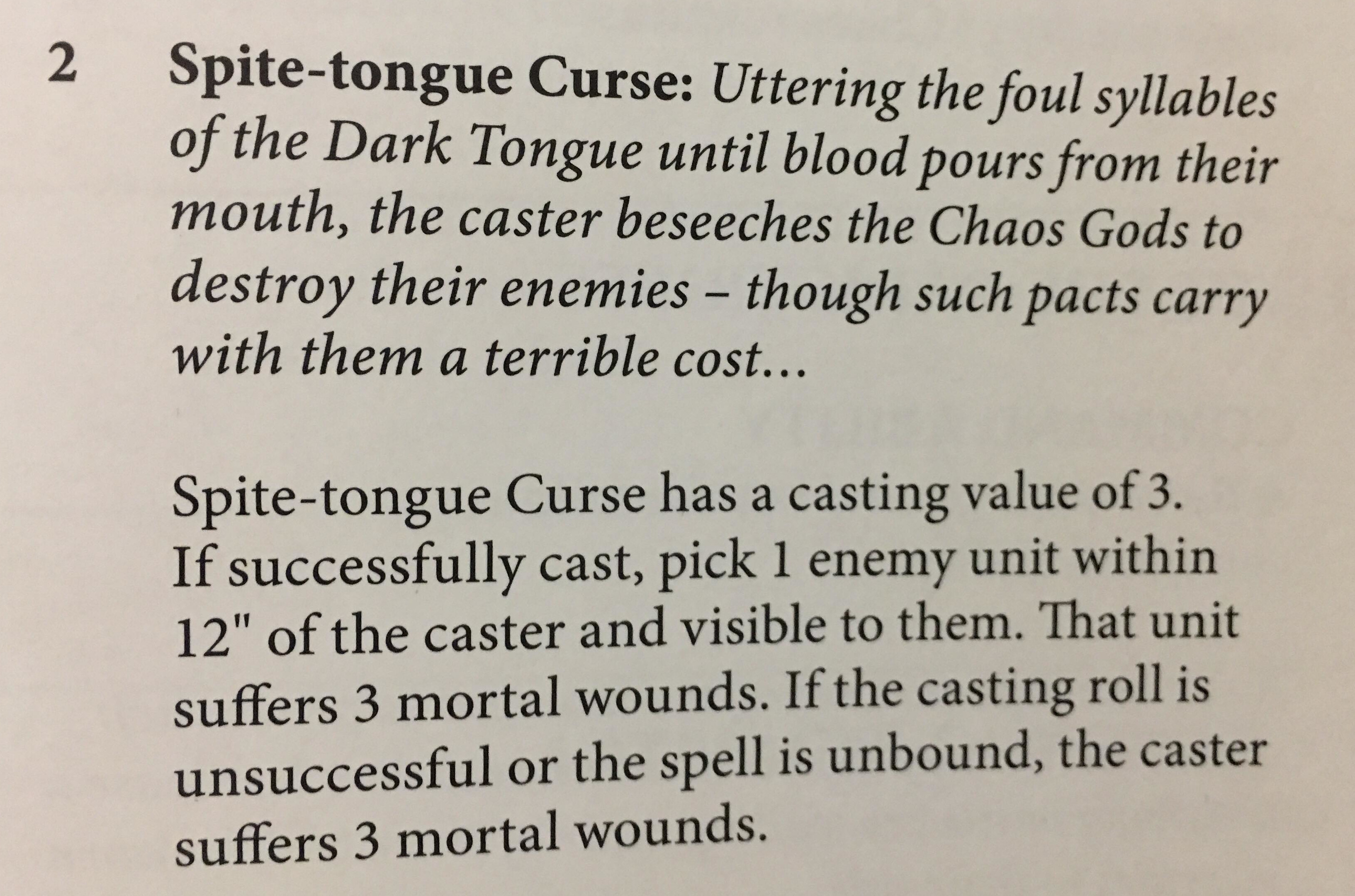 This one is funny, not a first pick of course but it's still 3 Mortal wounds. 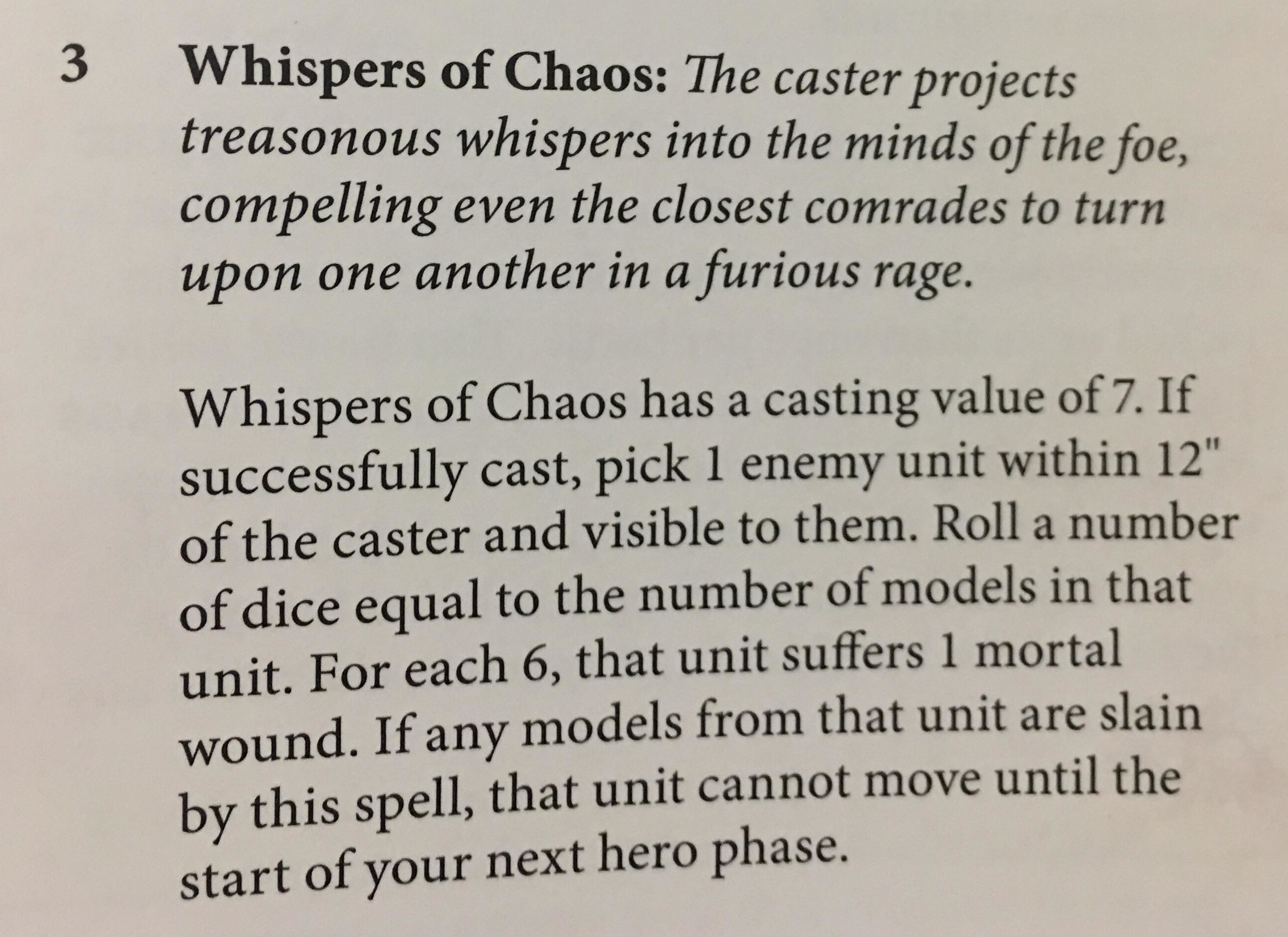 Wow this one is also very good and very useful to lock large unit of infantry. Combined with Bloodslick ground (prince khorne command ability halving charge and run by 2) it's a nice. 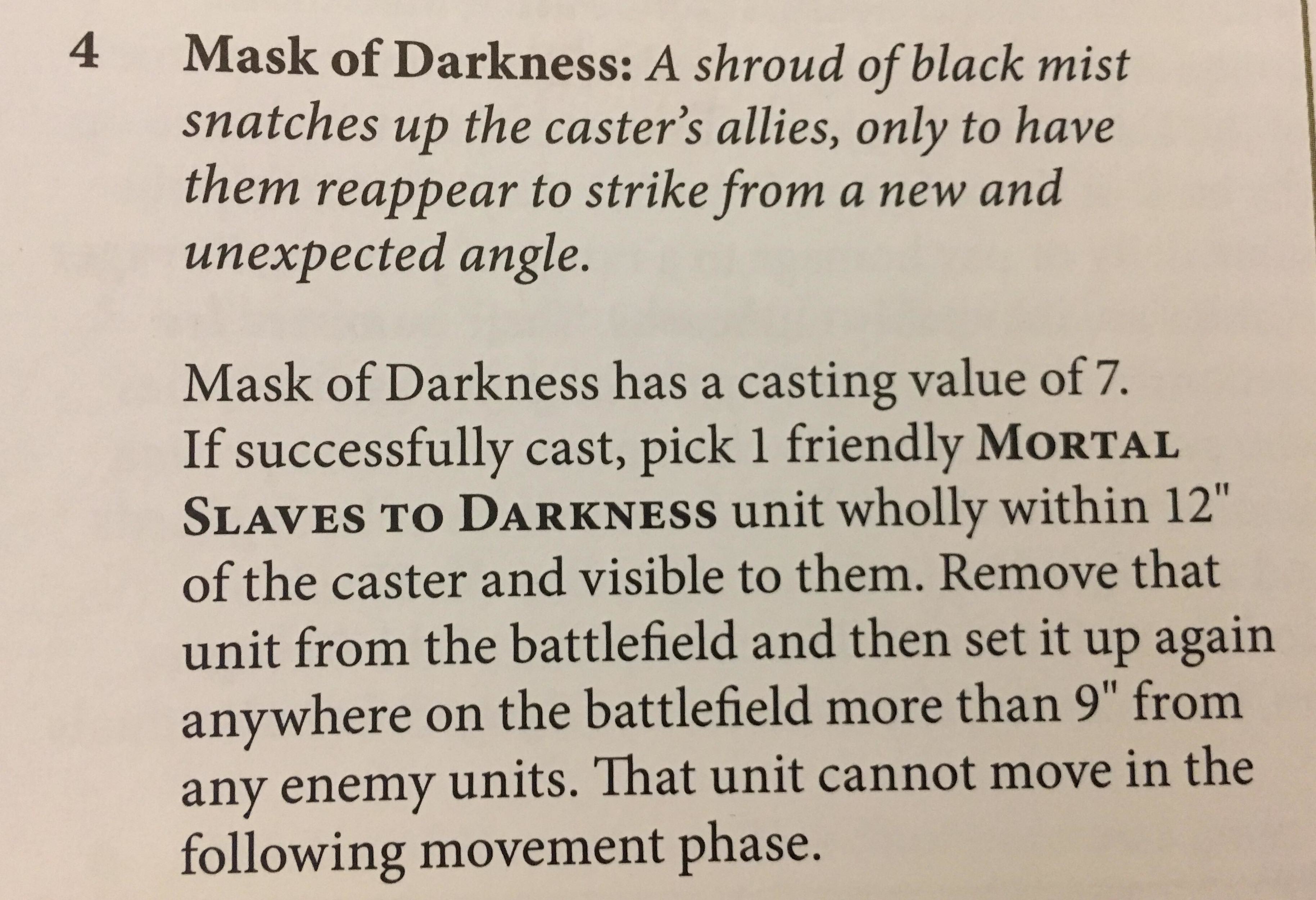 Da Jump for slaves to Darkness, very strong with Marauders as they can charge 9 very easily. Having Aura with Reroll for charge will help also.
Endless possibility. 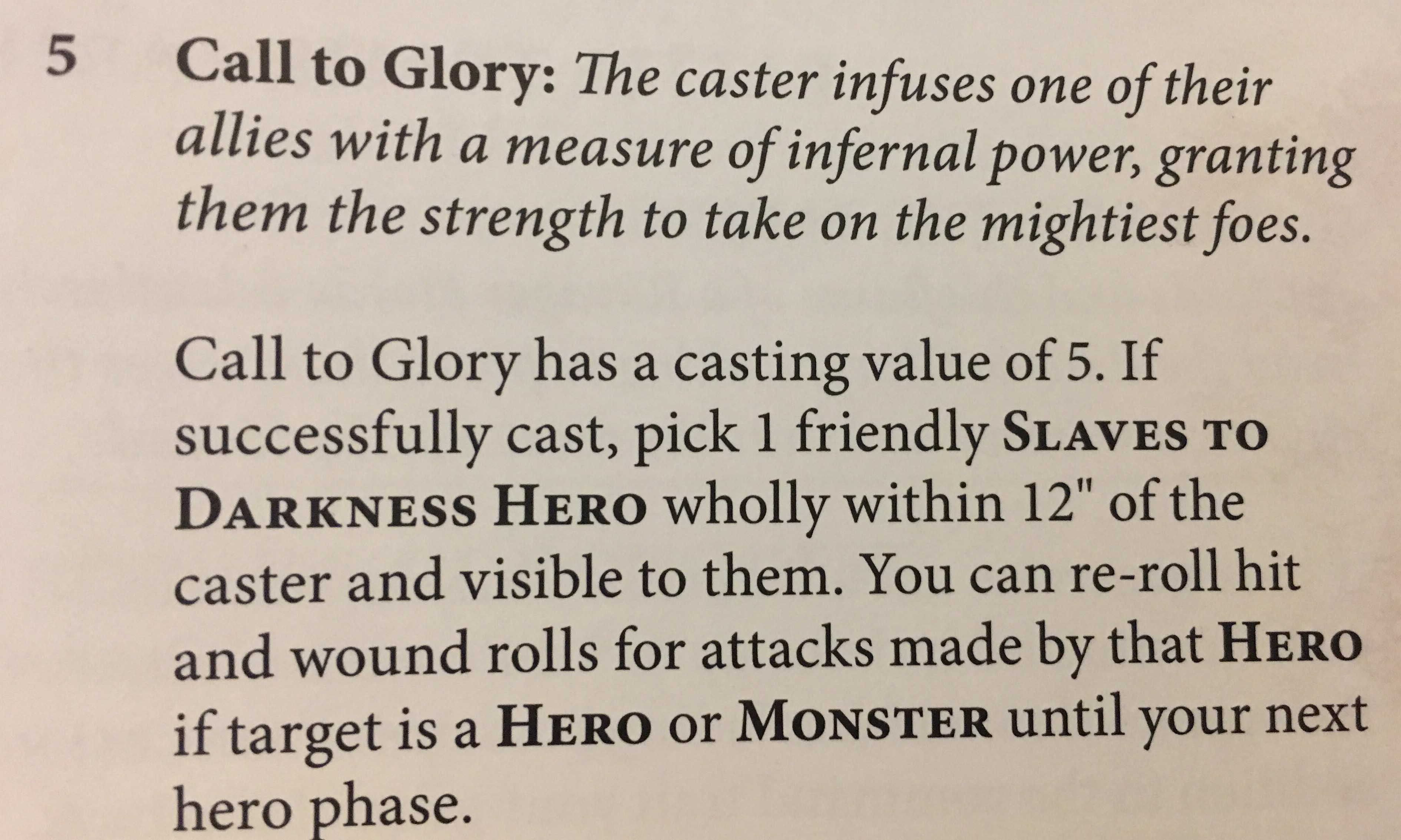 Not great but if you couldn't afford the Sorcerer lord or foot or don't have an Altar. Archaon can cast it on himself before erasing enemy biggest threat ^^ Problem there is a better spell for The Everchosen ! 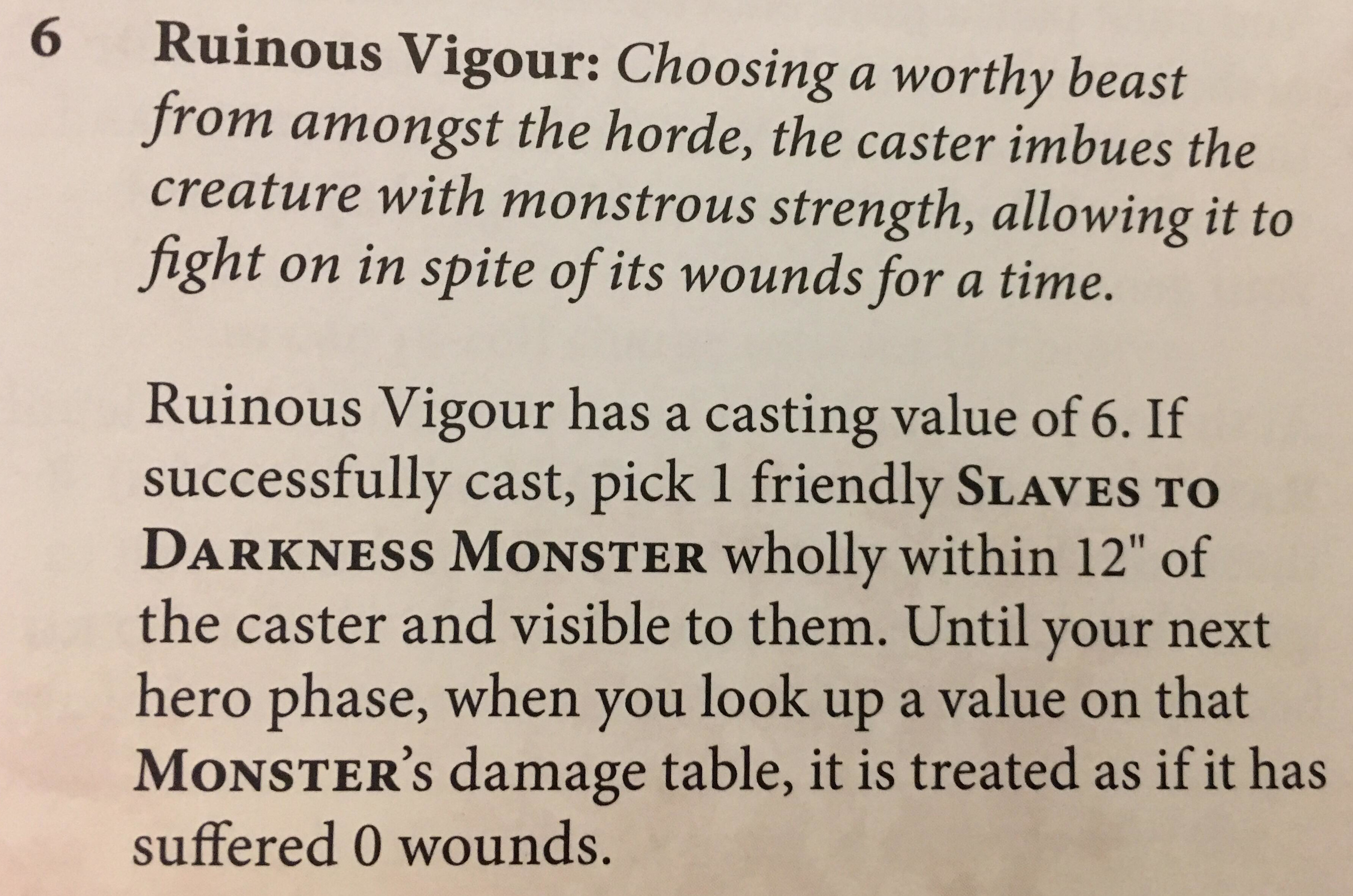 Yea Archaon is a monster, same apply to Manticore, and the different monsters available to you. But having Archaon moving 14" with 6 heads attacks even on midlife on turn 2 is very strong.

Very good spell list with a lot of different option. To me, Binding Damnation is Vital if you plan to chain pile in with Varanguard or Chaos Lord.

That's it for the Allegiance and spells rules. Will do the Mini faction tonight i think!