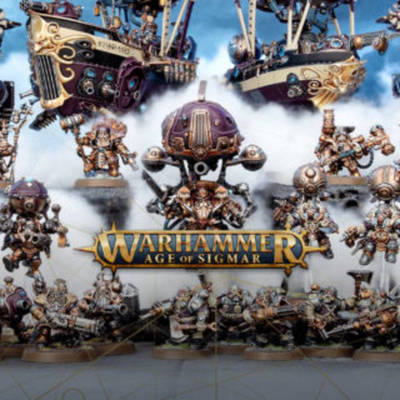 Welcome to the second part of the Kharadron review now focusing on the special rules the army get.
If you want to read the first part of the review click here

The faction has 2 specials rules, the Code and the Aether Gold!

The code is the first army-wide power they have. When you build your army you get to choose 1 article 1 amendment and 1 Footnote from a list of 3 each time.

First you need to choose an article : 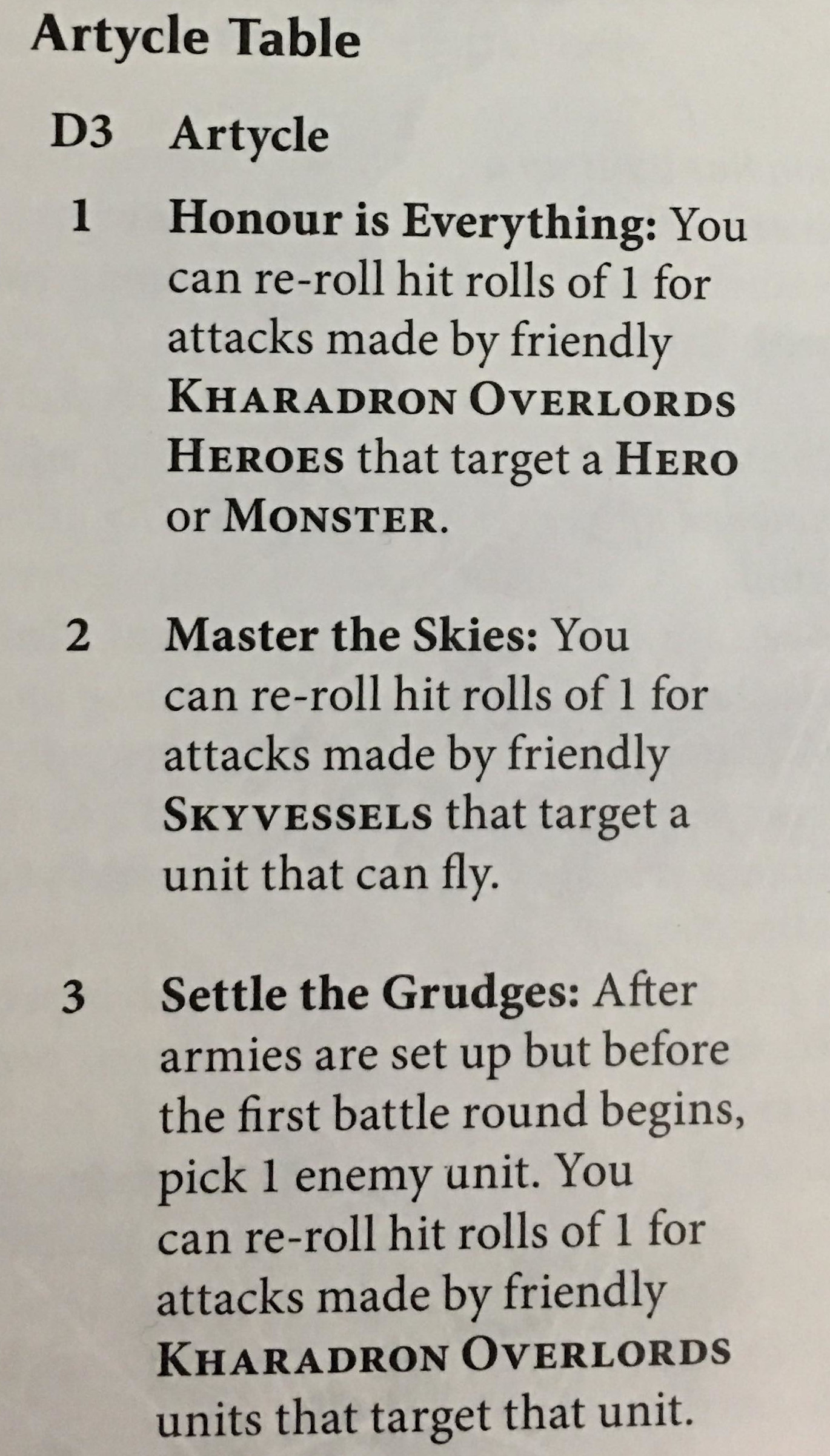 Maybe it's me but they are pretty weak ^^ I think that I always pick Settle the grudge allowing me to focus one problematic enemy.
Once the Artycle is chosen you get to choose an amendment : 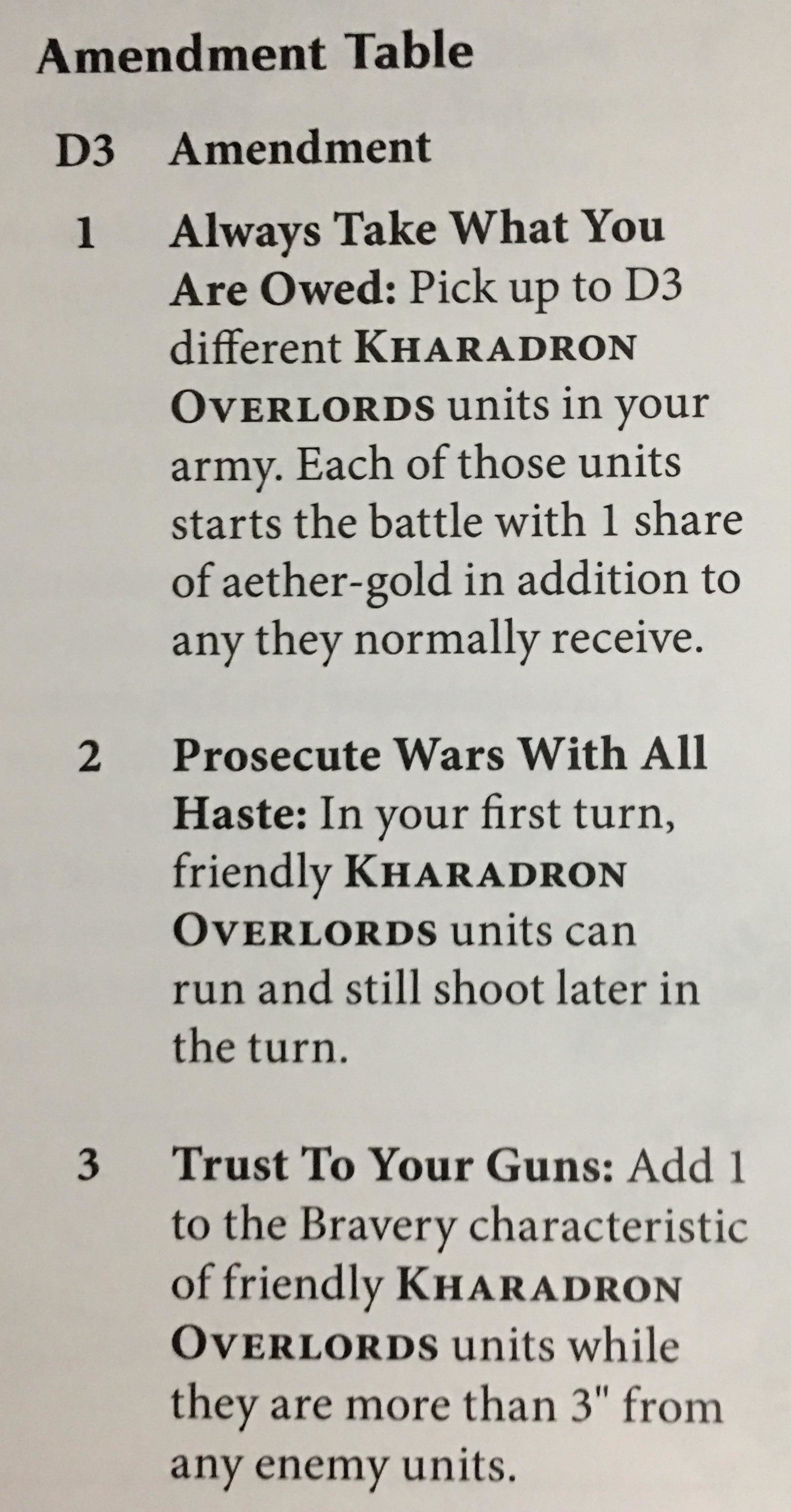 Hmm, number 3 is trash, second is ok but with the new" fly high "rule for the Skyvessel, it's not needed. I think the number 1, even if random is the best! As we are going to see Aether gold is super good!

All that left is choosing the footnote : 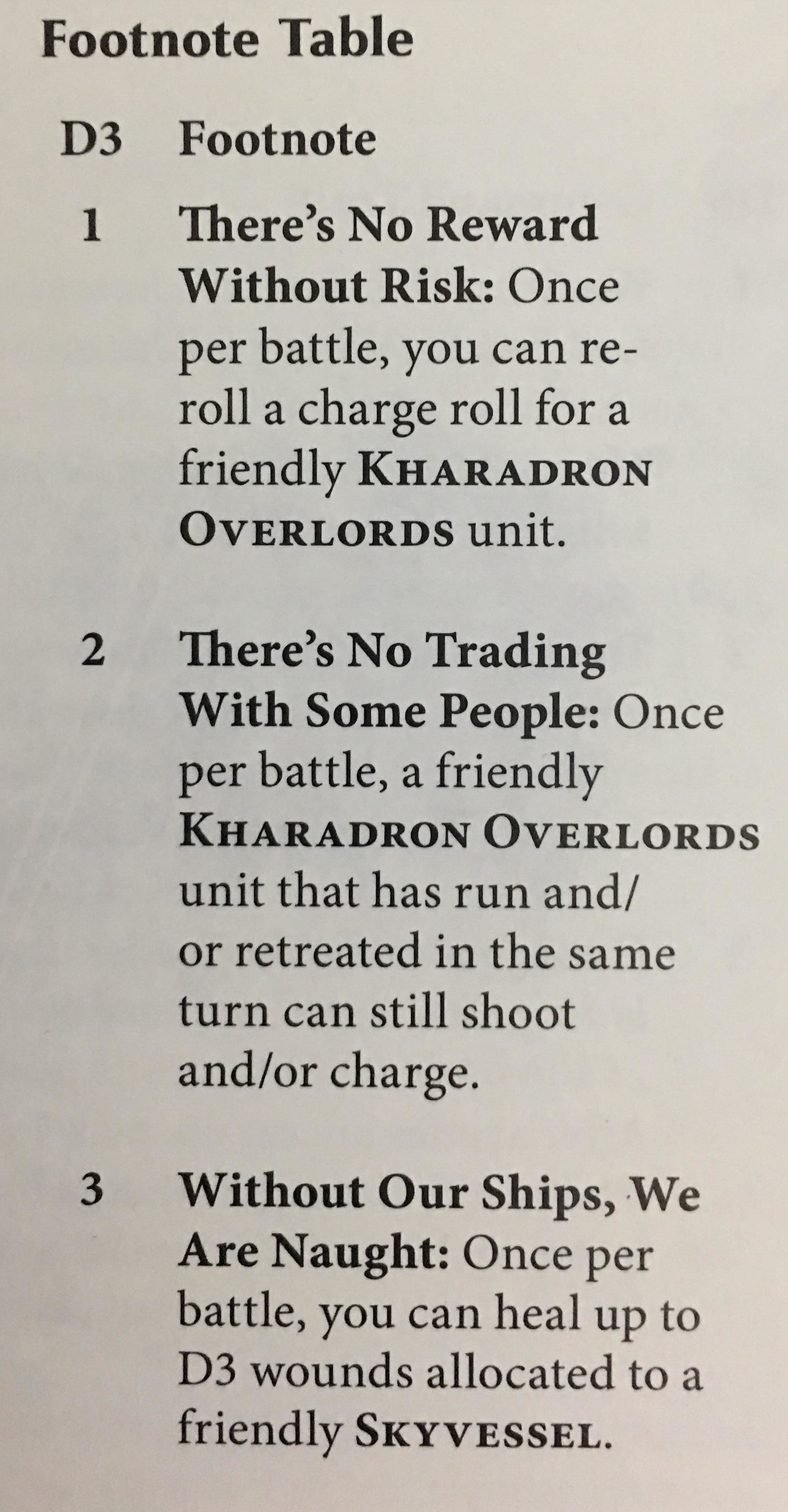 Footnotes are once per battle abilities and are very good !! Choose the one that fit the best your army or play style. Number 2 is my favourite but that is just me! 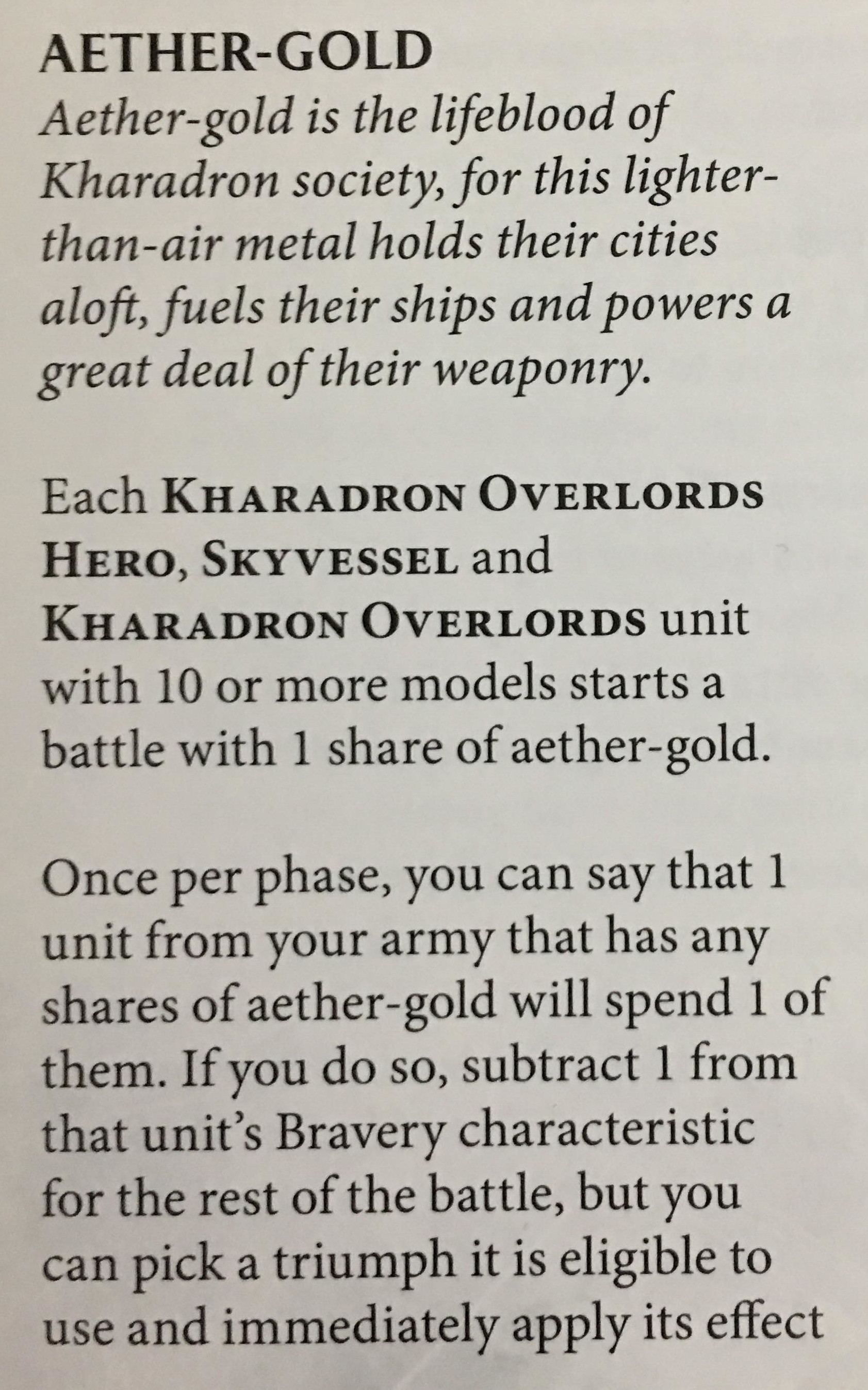 Aether gold has a lot of potentials!, each hero, skyvessel and units with 10+ model have one share! (that's why I prefer the amendment number 1 to give aether gold to ballon units ! )

The limit is one unit from your army per phase. Note it doesn't specify "Your phase" so you can use it during enemy turn !! Each time you use one you lower your bravery by 1 and get the benefit from a Triumph.

Triumph are in the rules : 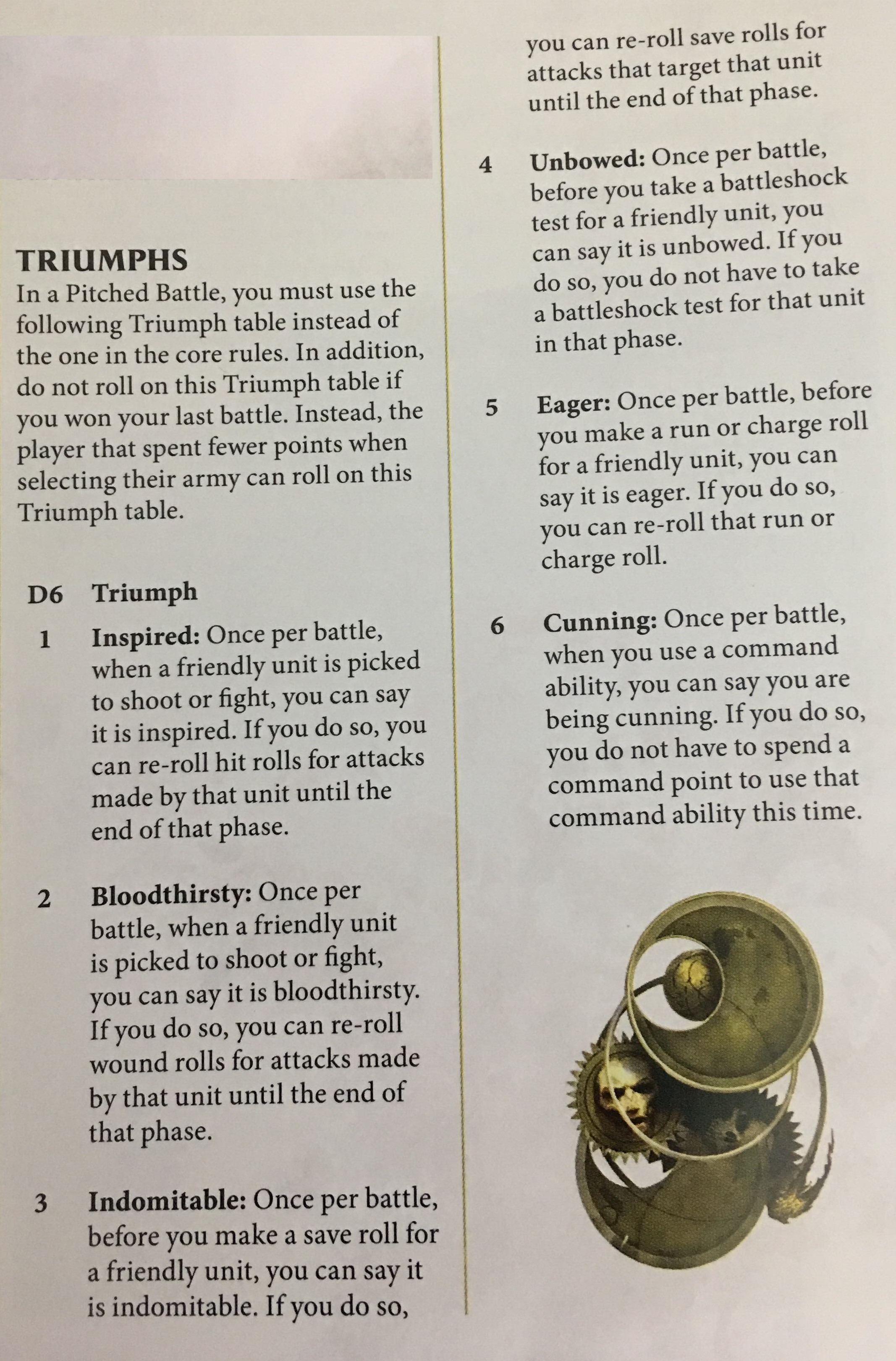 Note: I took the list from the pitched Battle but as nothing is specified in the Battletome maybe a faq will change this.
Note 2: The once per battle part of the Triumph is ignored if you pay with Aether Gold!

Honestly, it's a bit cumbersome to use as you need tokens for Aether gold, Triumph effect, Bravery debuff but the effect are quite good !

Each Skyvessel can once per game do a salvo with reroll hit or wounds. You can even choose to use Aethergold during the enemy attack to reroll save. Imagine the Ironclad rerolling save !!!!

Each hero can use a Command ability free and it's super good for An Admiral !!

The rule is very good but the bigger the battle is the more limiting the once per phase is.

Kharadron Overlords can choose from 6 sub-factions, each one imposing the code, the General trait and the first relic. 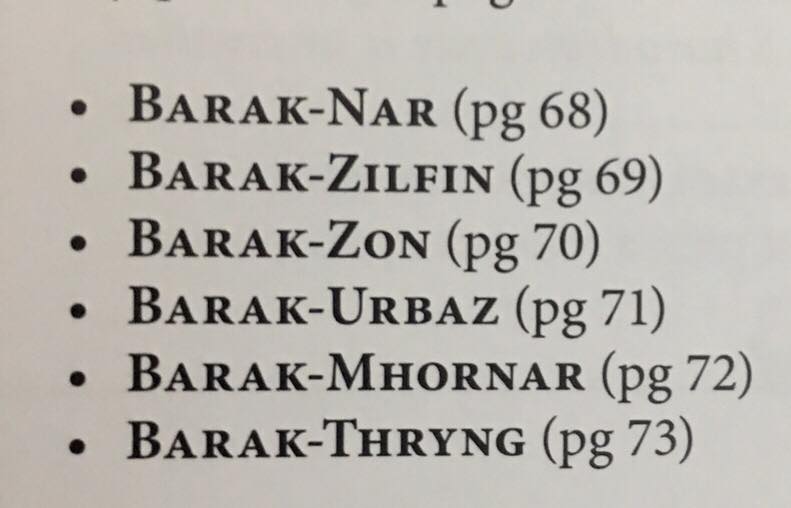 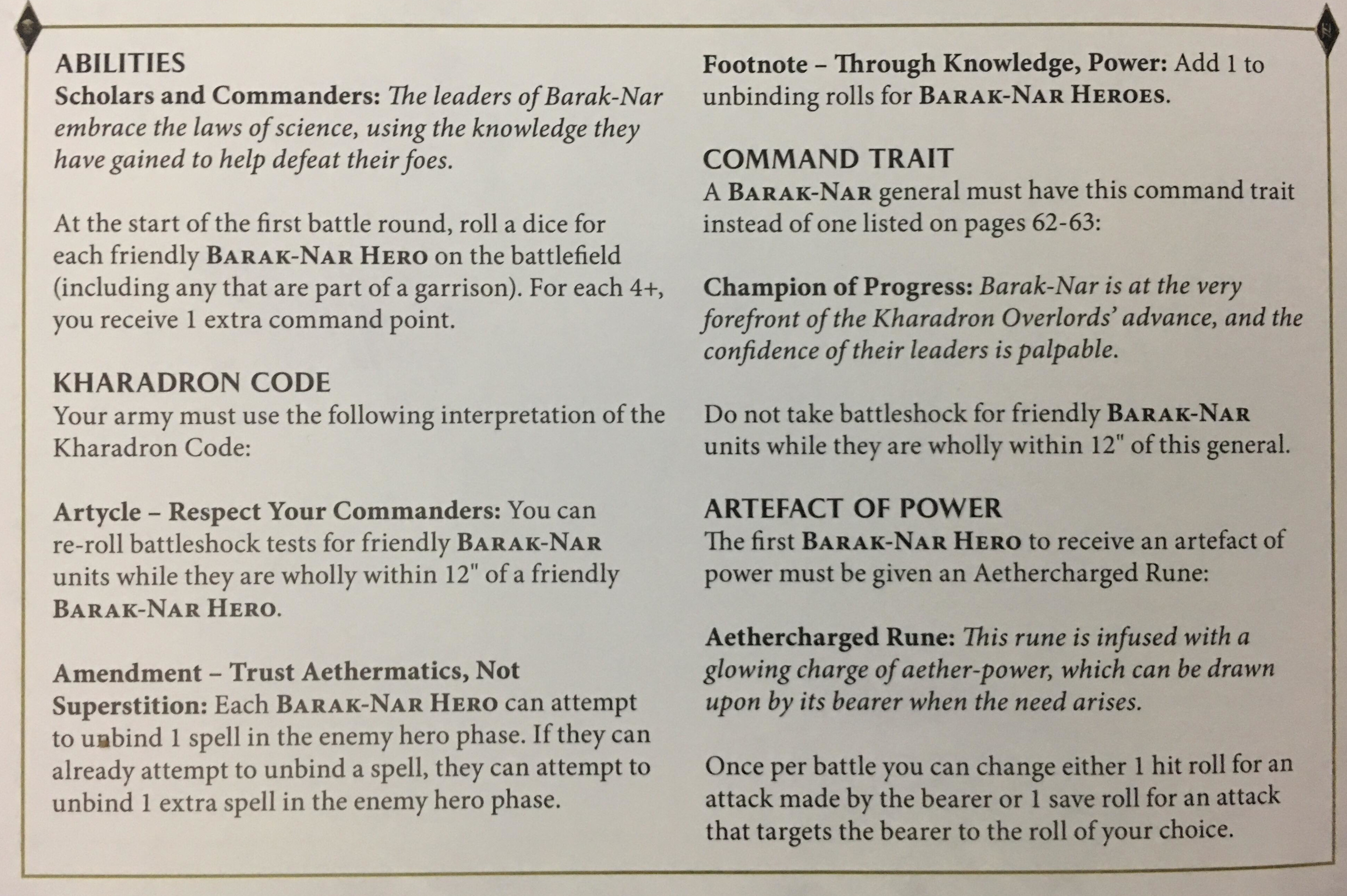 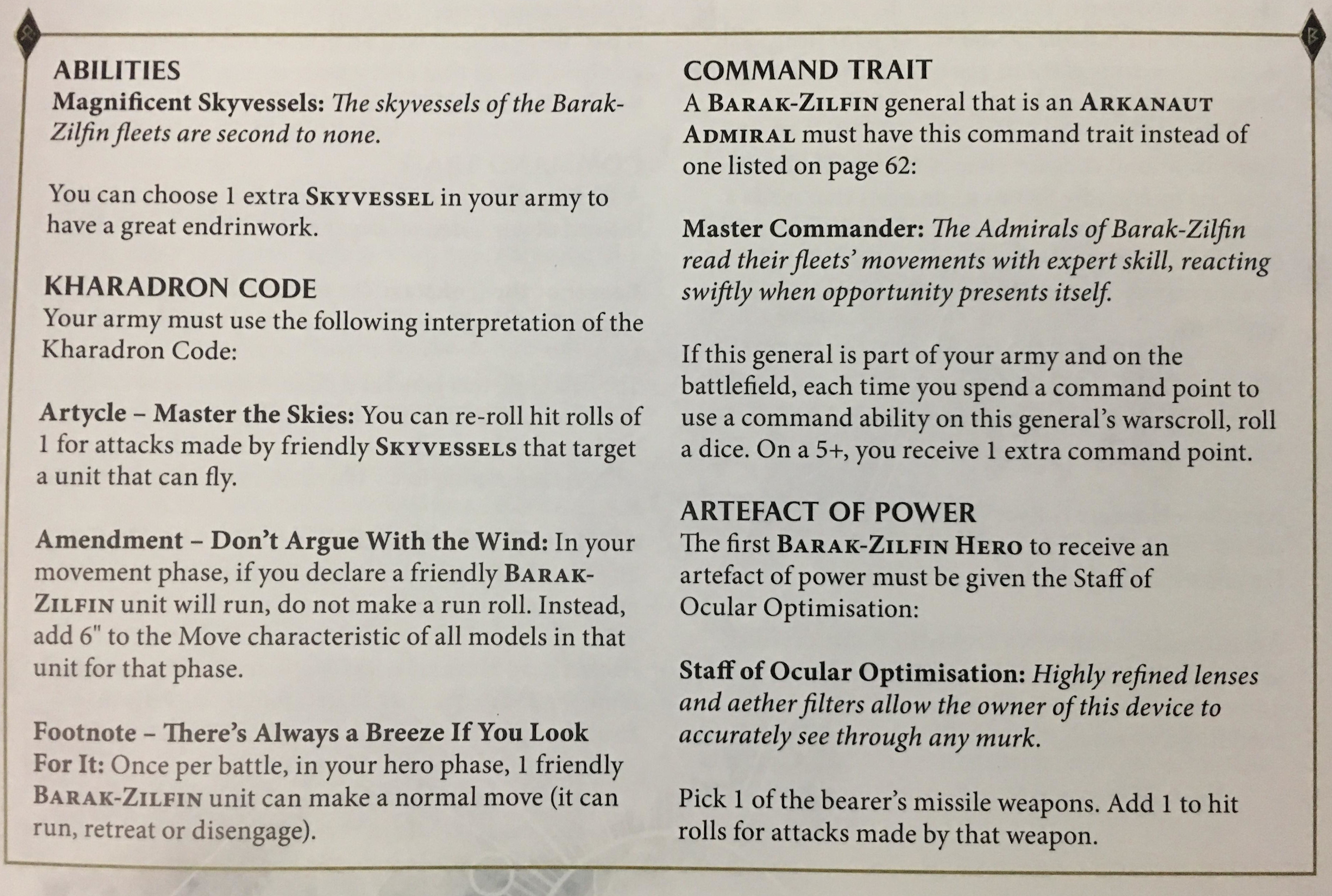 Extra Endrinwork is good, the trait is ok and the footnote is interesting.
Not my favourite choice but it's not a bad city. 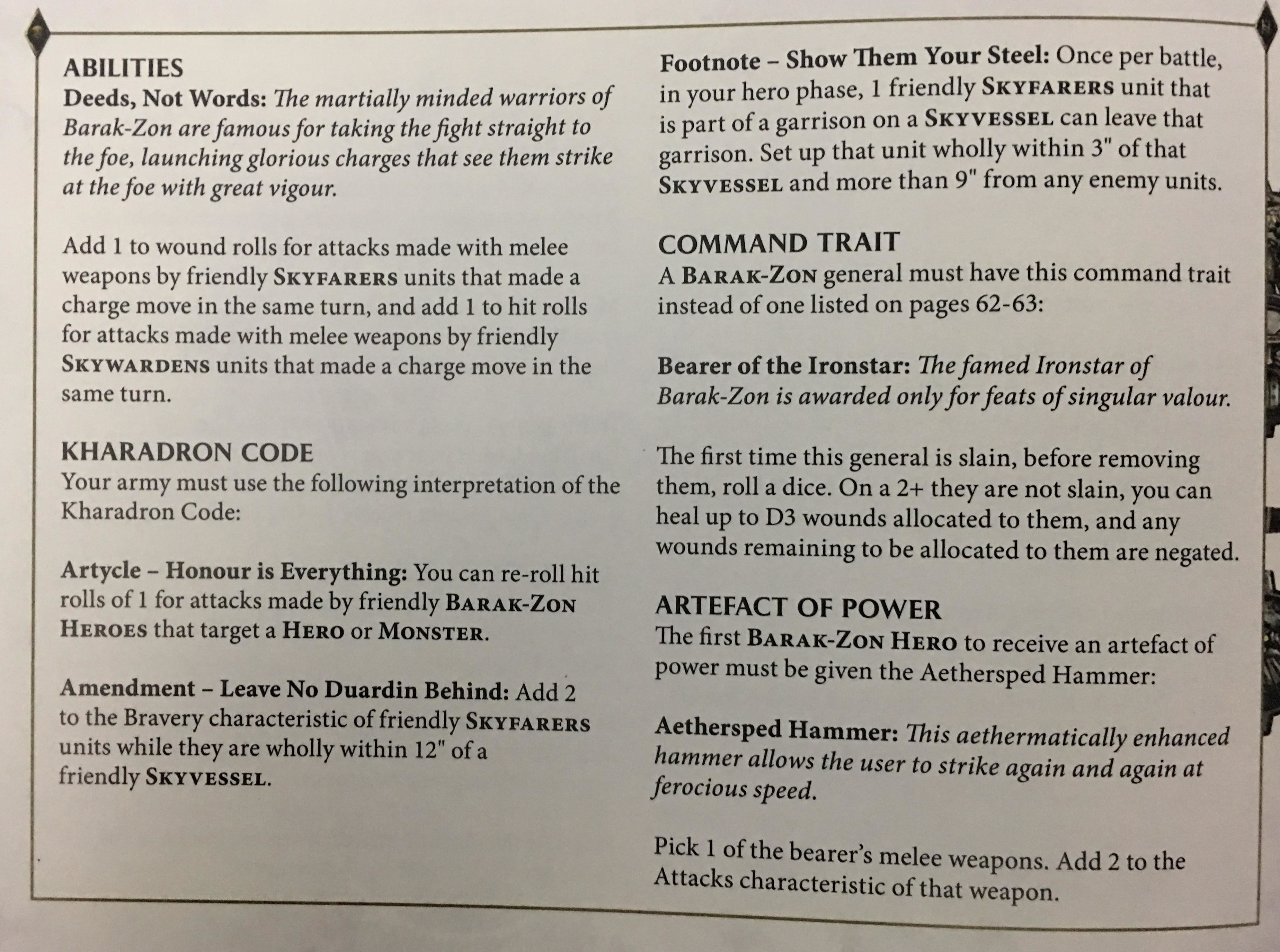 My favourite City! The trait is awesome, the relics is very good too. The ability give Skywarden a charge with +1 to hit and wound rolls that's very good if you can combine it with an aether gold for a reroll to hit! by bringing a max size unit ! (12 for 400 points) 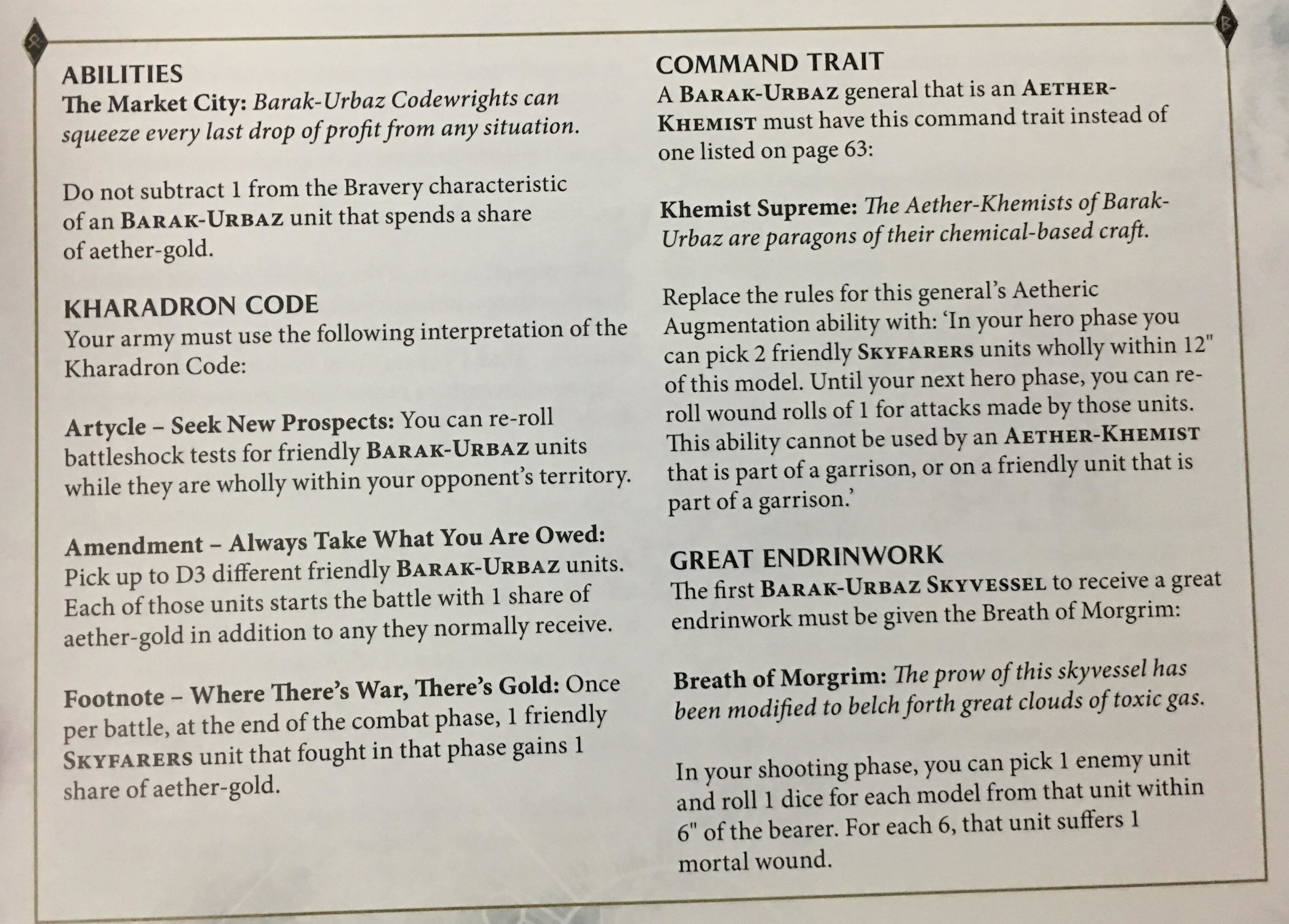 Urbaz is another good choice but the Mandatory Endrinwork hurt a lot :( but if you don't have an Ironclad and don't need the fly high Endrinwork it's a good choice as you can spam use aether gold all game long without the bravery debuff.

ps : The fly high Endrinwork is a ship trait for ironclad that allow to embark 25 models and still use fly high and disengage. I think it's Mandatory ^^ 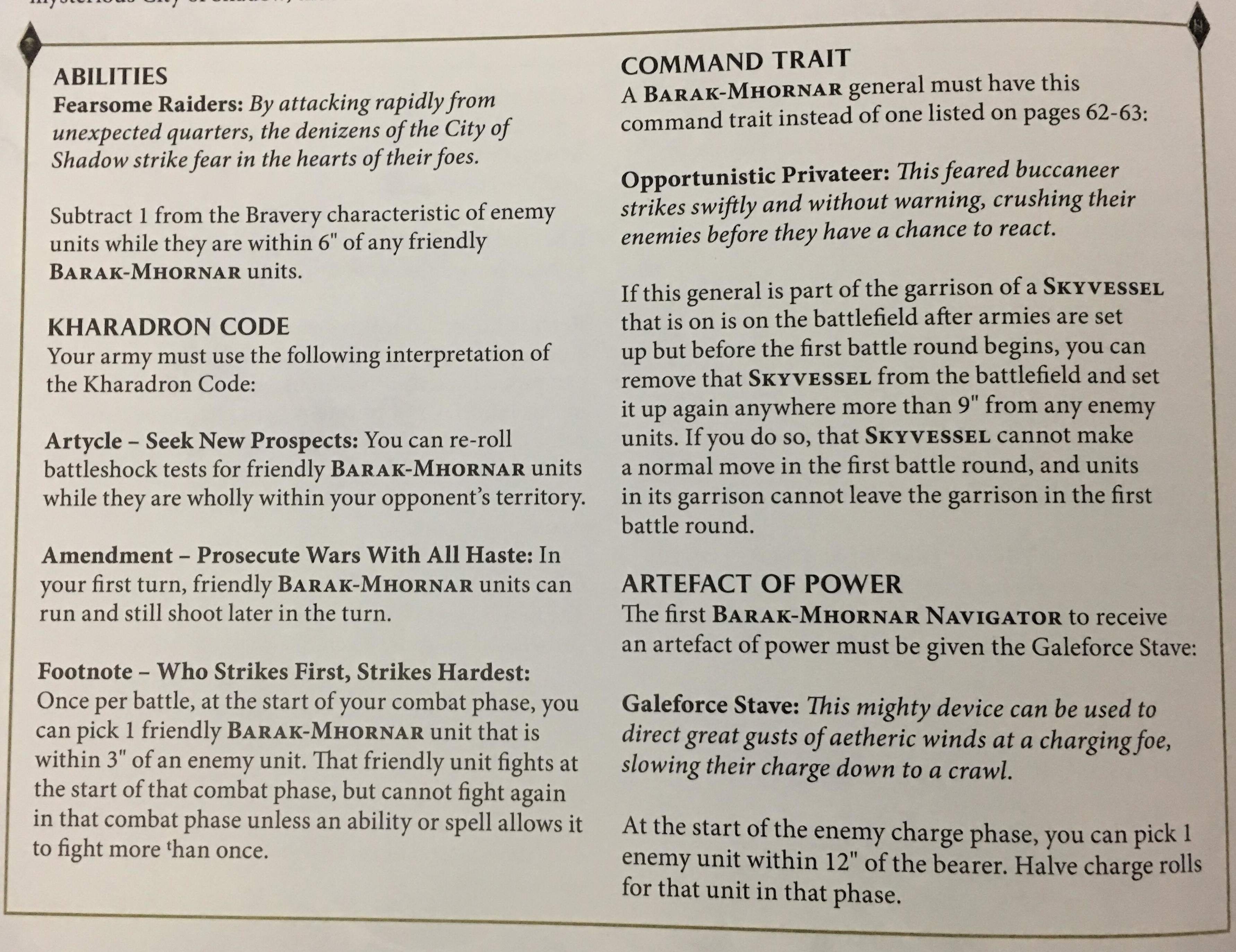 Relic is fun, but other powers are not good :( 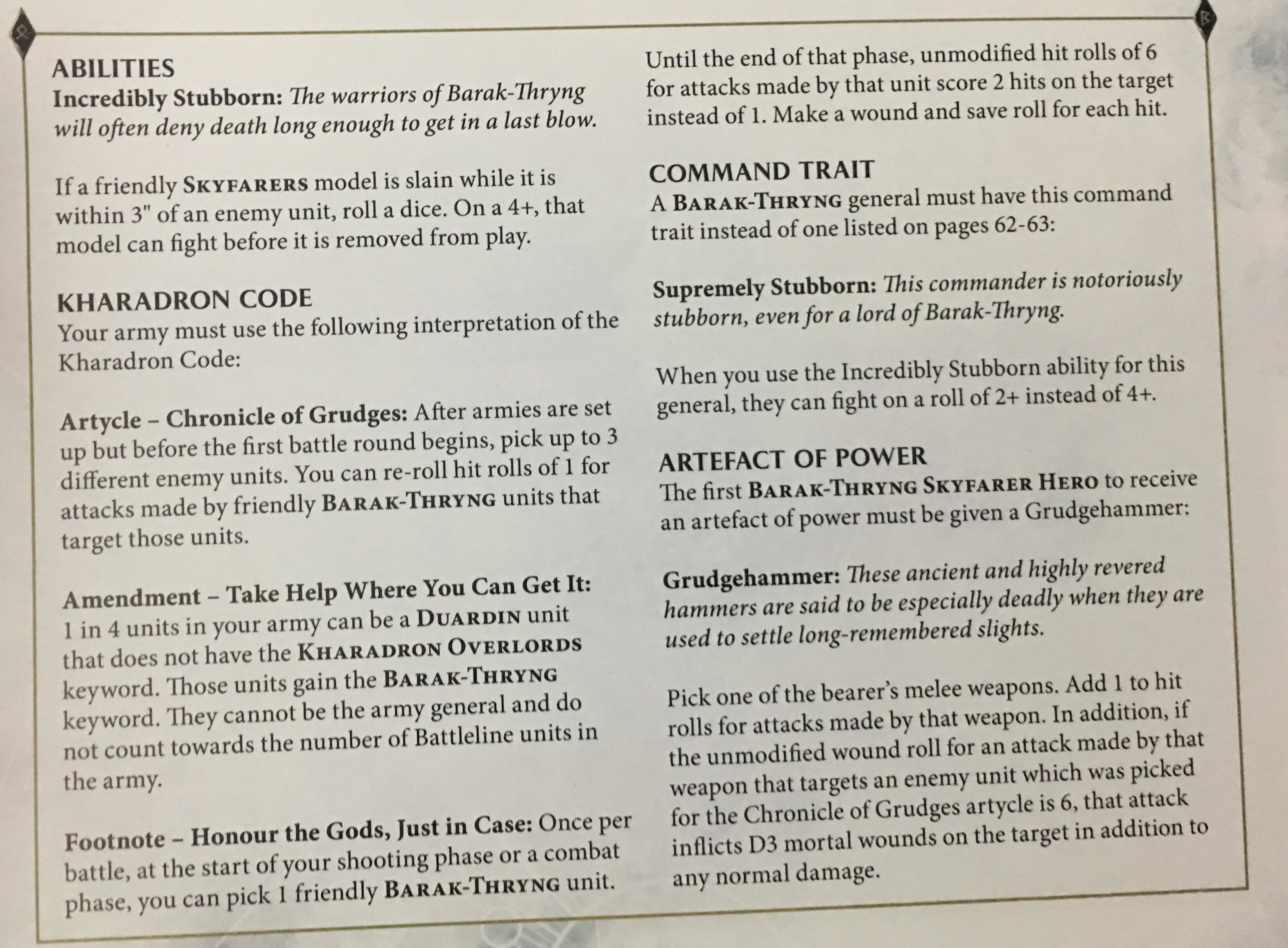 Mixing Duardin is kind of neat but the Stubborn power only work on Skyfarers. Another bad city but maybe someone will find a good combo.

That's it for the second part of the Review, all that left are traits and Relics. I will add them to this part I think in the evening.
Will do Tzeentch tomorrow I think. 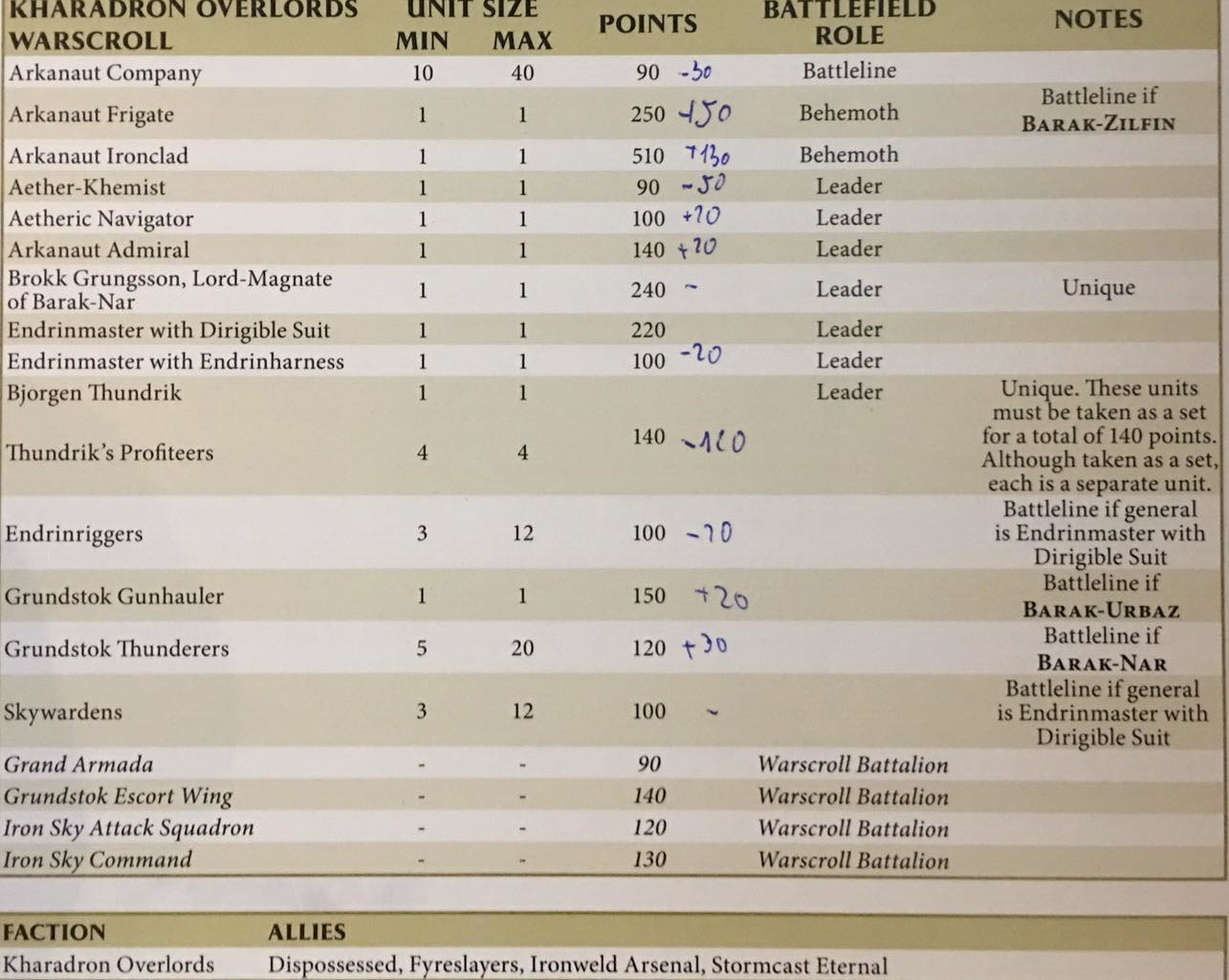 Multiple-way to get alternate Battleline to fit your army!

Admiral, Edrinmaster, Navigator and Khemist have access to specifics traits and relics. That's a lot of options so let's see what is good or not


A general Admiral gets 6 traits options and 6 relics.
-One extra aether gold
-+2 wounds
-Double dmg against a specific hero choose at the start
-One free fly high before the game
-Extra command points on a 2+ each turn
-Extra footnote.

The extra Aether gold or the Free command points are the best choices as the Admiral wants to keep using command ability while on a ship.

On the other hand, relics are kind of bad. The only good is the Proclmator Mask Hailer granting a free command ability once per battle round.

The Endrinmaster share the same first 3 traits with the general. The other 3 choices are: +1 repaired wound, +2A with Grungni gaze, free "I have my eyes on you"
Nothing fancy here :/ but the 2 extra Grungni gazes are cool.

On the Artifact front, it's divided into 2 lists of 3 options. Sadly the best option "Monolens" give an extra 9" range of the gaze and combo perfectly with the general trait is limited to non-flying Endrinmaster. Still, a general with the traits and relics riding a ship can do 3 shots per turn at 18" (3+/+2/-1/D3)
The "Luck" option for the Endrinmaster with a balloon is the "Bomblets" : Once par battle, choose a target within 6", on a 2+ deal 1 mortal wound and roll again. Keep rolling until death or roll of 1. Scary ^^

Share the 2 first with the other 2, third is a reroll on the tempest, fourth is a +3" on the ship he's embarked upon, the fifth is +1 dispell/unbind, sixth is interesting: Choose one terrain or objectives, while wholly within 12'' of it don't roll for battleshock. I see little interest in having a General Navigator but in that case, I'll try to synergize the last ability with a drop infantry list.

Only 3 relics choice but there is a dispell scroll so it's useful.

Khemist is trash don't pick him and don't make him general. Honestly, the only point of the Khemist is giving him the relic: Spell in a Bottle. This artefact let you cast 1 endless spell per game of your choice (any one) 100% success and can't be unbound. My first idea would be Cog for the +2 charge if you want to do a drop and charge list. Or maybe a perfectly placed pendulum. Still, you have to pay for the spell and it's once per game...

Endrinworks are mount trait but for Skyvessels. Each size of ship have a list, you get to choose one trait for free and get extra for each Battalion.

Most interesting are for the Ironclad are the : extra armor (+2 wounds) or the bigger engine (allowing to fly high with more than 16 models). IMO there is no choice here, 25 models + 7 hitchers on the same Ironclad is so much threat!