Wrath of the Everchosen Fluff Review !

Tags : death chaos wrath of the everchosen age of sigmar 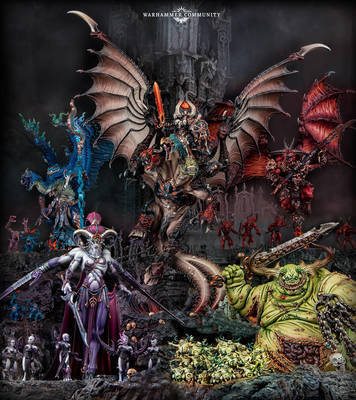 The second part of the review is this time about the fluff! If you want to check the first part follow this link.

First we are going to do a summary of the events happening, then we will describe the Setting of the Wrath of the Everchosen (Background and objectives) and lastly, we will look at the unravelling of the events ( War act 1 and 2)

What happens in the Wrath of the Everchose is pretty straightforward, Nagash want to capitalize on the Necroquake messing with the 8 points to launch an attack on the Shyish Realmgate fortress and then proceed to conquer the 8 points. It's even better knowing that Archaon is never at home because he's tracking Slaanesh prison!

Setting of the Wrath of the Everchosen

The fluff in the book clears a certain number of questions I had on the different factions (death and chaos). Honestly, it was a fine piece of fluff to read. 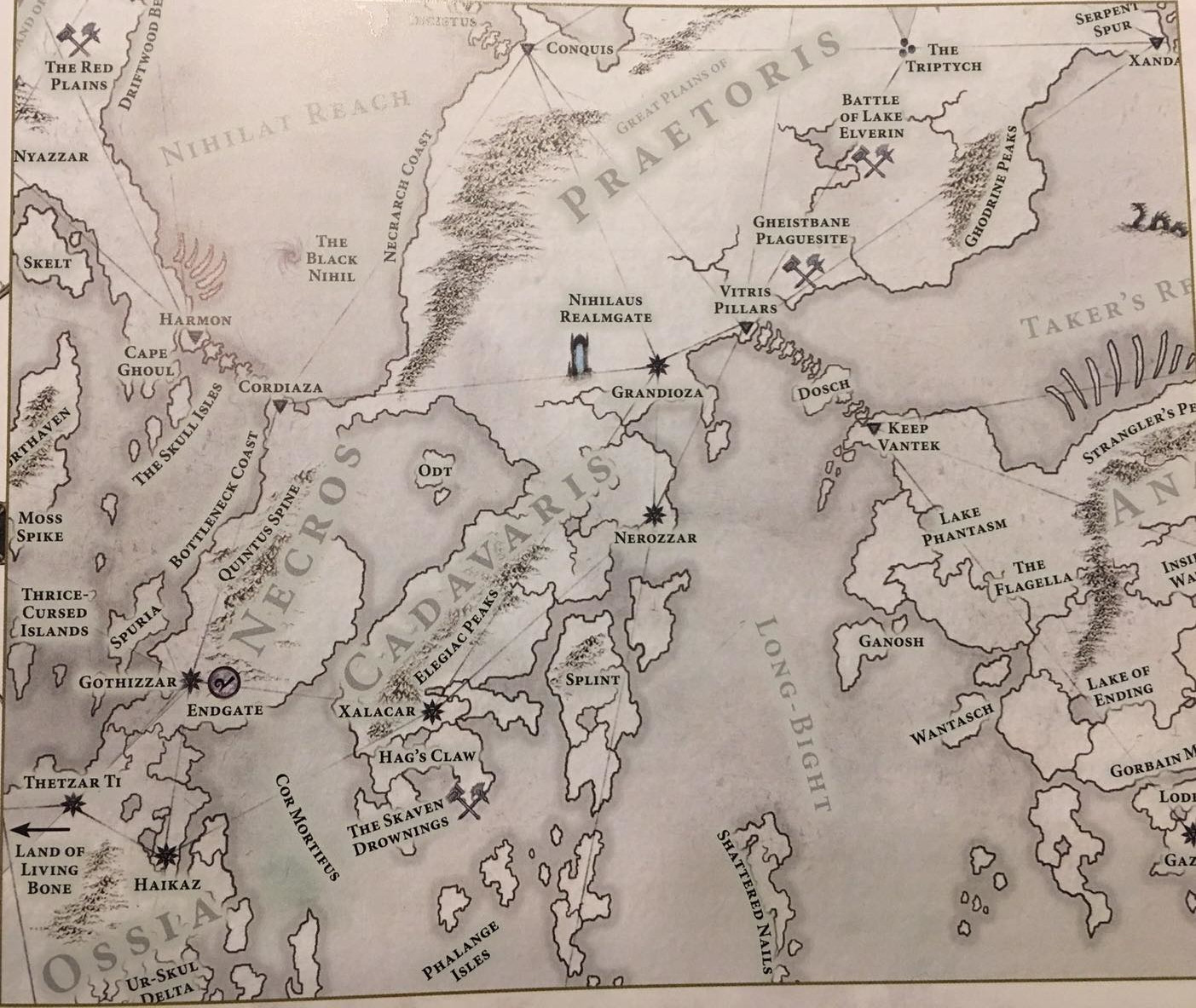 What I found interesting were the details given. We learn that Ossiarch Bonereapers were made before the age of chaos but Nagash was keeping them stashed for when he could find a new General for them.
Nagash believed that Katakros was dead and when he escaped from under the Lake Tethis he was formless and was reforged into the actual Katakros
Archaon is worshipped like a demi-god by a bunch of mortals followers, even more than the gods. Still, this is not all dark and skulls in the 8 points. Necroquake Ravaged Archaon home, 2 Realm gates were closed (Ashqy and Ghyran) The Realm Gate of Ghur is inside a beast named FangaThrak ! a segmented, multi-legged creature whose mouth is a realm gate(lol). Azyr gate is not accessible and all this combined with the Necroquake make it hard to move troops around the realms. 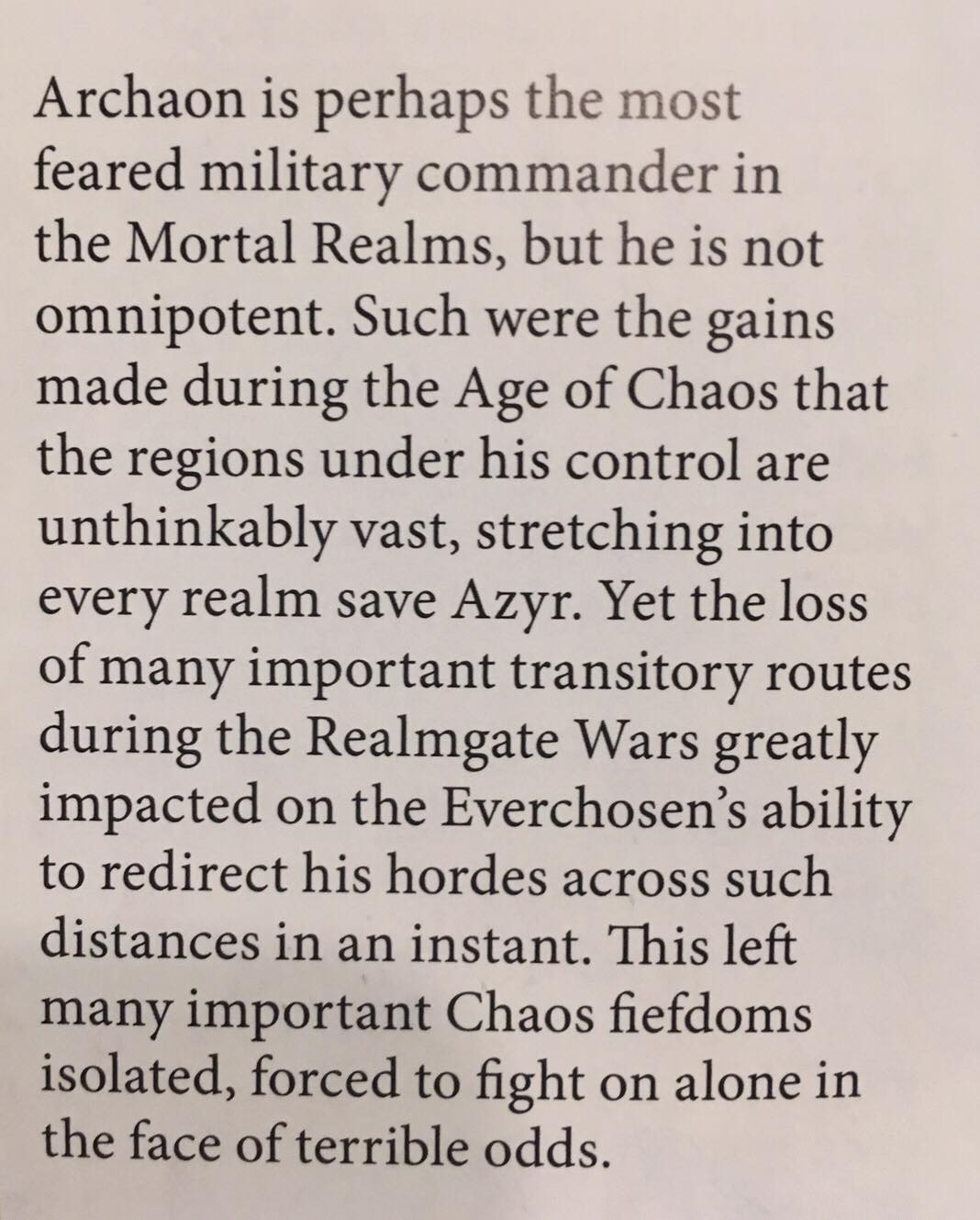 Also, we learn about the Varanite, the 8points Realmstone AkA Super Warp Stone!

A lot of details were omitted and there is much more to read, I really enjoyed the fluff of the Wrath of Archaon

The Shyish side of the realm gate is held by Chaos (Gothizzar Bastion) but Nagash sends a continuous flow of undead to keep the pressure. Also, it's fun to read that even Archaon consider Nagash Megalomaniac (haha).

Archaon has a throne inside the Varanspire (the huge sword-shaped Archaon tower in the middle of the 8points) but he doesn't sit on it, at least until he conquers everything. And Right now his motivation is getting Slaanesh back, after centuries of scrying by the Silver Tower guy he managed to track Slaanesh sub realm prison.

Nagash was kind of surprised that the Necroquake, sabotaged by Chaos. Wrecked the 8points so much. With Katakros described as a better General than Archaon, his legion at the ready and Lady Olynder bringing the Nighthaunt, Nagash think that the Chaos Realm is Ripe for the taking !!!


I don't want to spoils all the details but the fight can be divided into 2 acts. First one is Katakros attacking the Realmgate while Archaon is talking with Slaanesh and then the War inside the Chaos Realm!

As I mentioned before Archaon found Slaanesh realms, then found his prison then Trashed the Twin gods forces (Tyrion and Teclis) and "TALKED" with a god of Chaos! This passage is my favourite as it shapes what Archaon is, what does he think of the Chaos god and how does he act in their presence. I call it the Netflix effect but recently there is a trend to give "humanity and personality " to bad guys in heroes tv-shows or movies (Daredevil S1 with the Caid, Joker, Thanos...). It's made so we can relate to them ...it's a bit like this with Archaon, Katakros and Nagash...They all want stuff, even Slaanesh! 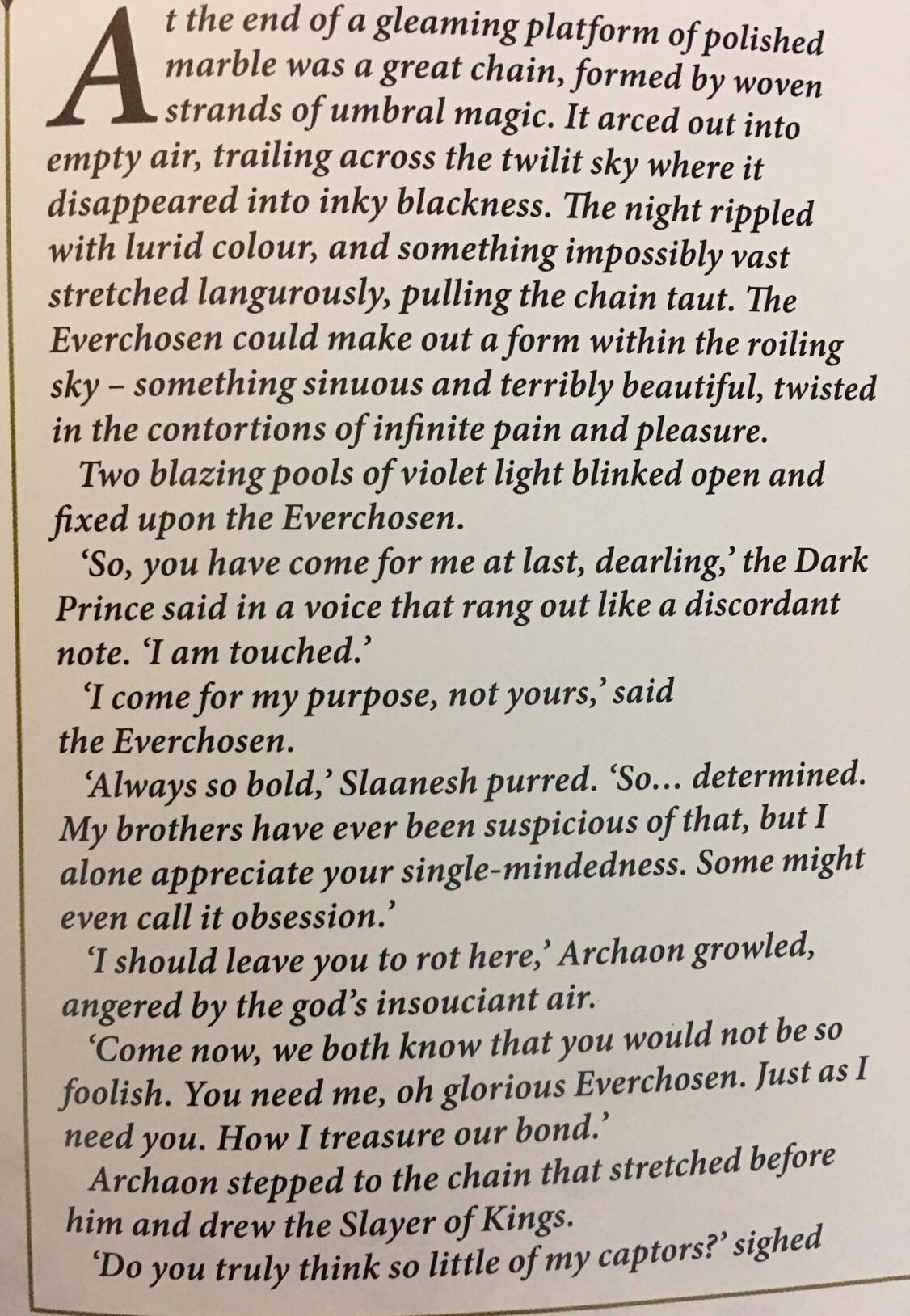 Don't ask me why but while reading this I imagined Slaanesh as the Freedy Mercury from the recent Queen biopic! (I want to Break Free ^^)

So Archaon start to breaking one chain holding Slaanesh then he sees the Varanspire under attack !!

On the Chaos side, we have the Poor Saskarid, rumoured to be joining soon the rank of the Varanguard. Damn even the commander in chief of the 8points is not into the Varanguard ? (I say "poor" because he has it rough ^^ )

The fight starts on Chaos Realm in Karheight Fortress (Realmgate defence on the Chaos side) and it doesn't look good : 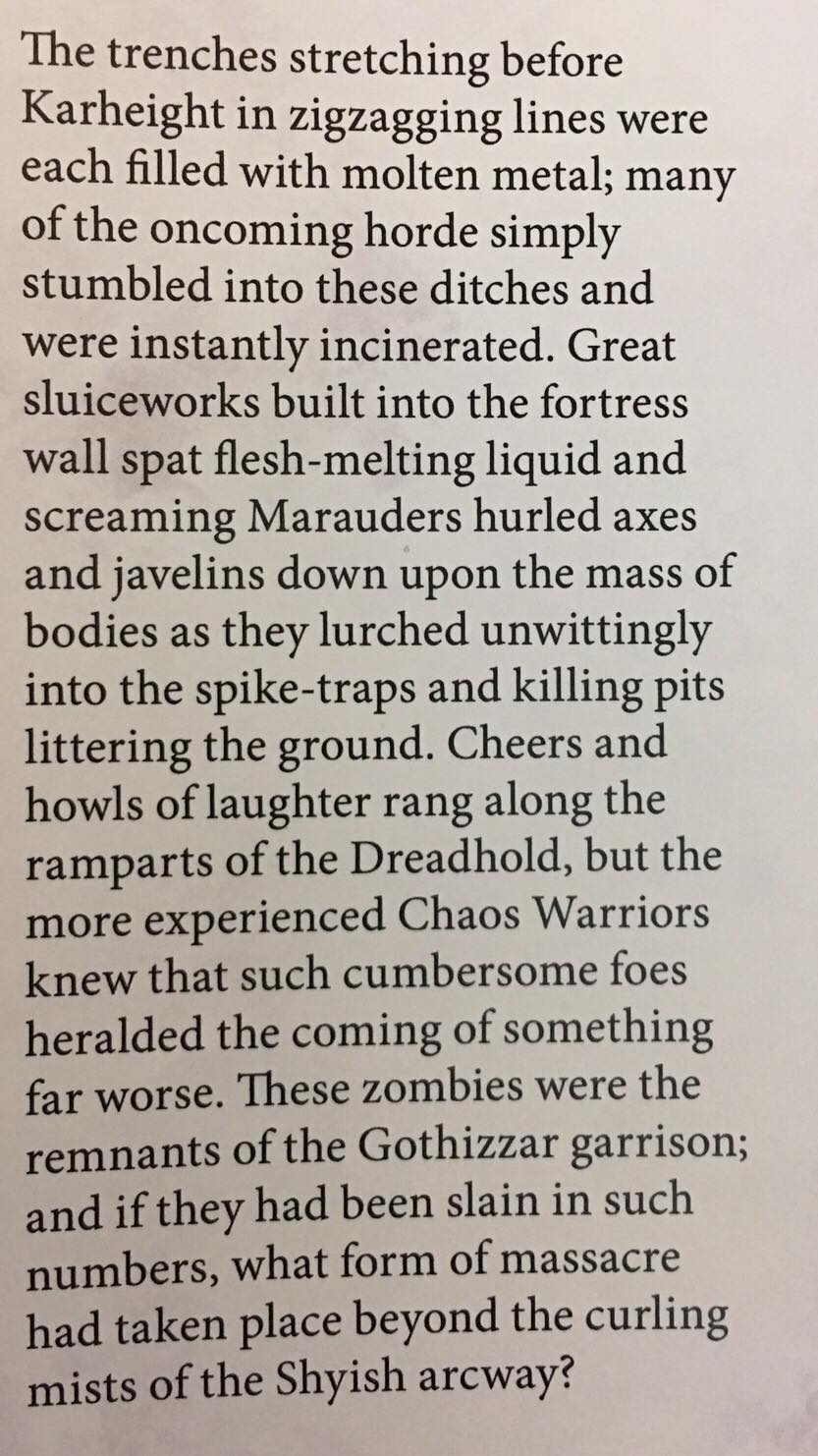 After some events during the battle, Lord Saskarid advised by the tongueless wizard (the Gaunts Boss from the Silver Tower) is in a bad situation, but still want to keep is honour intact! (we are very far from Chaotic Evil Knights don't you think ?) 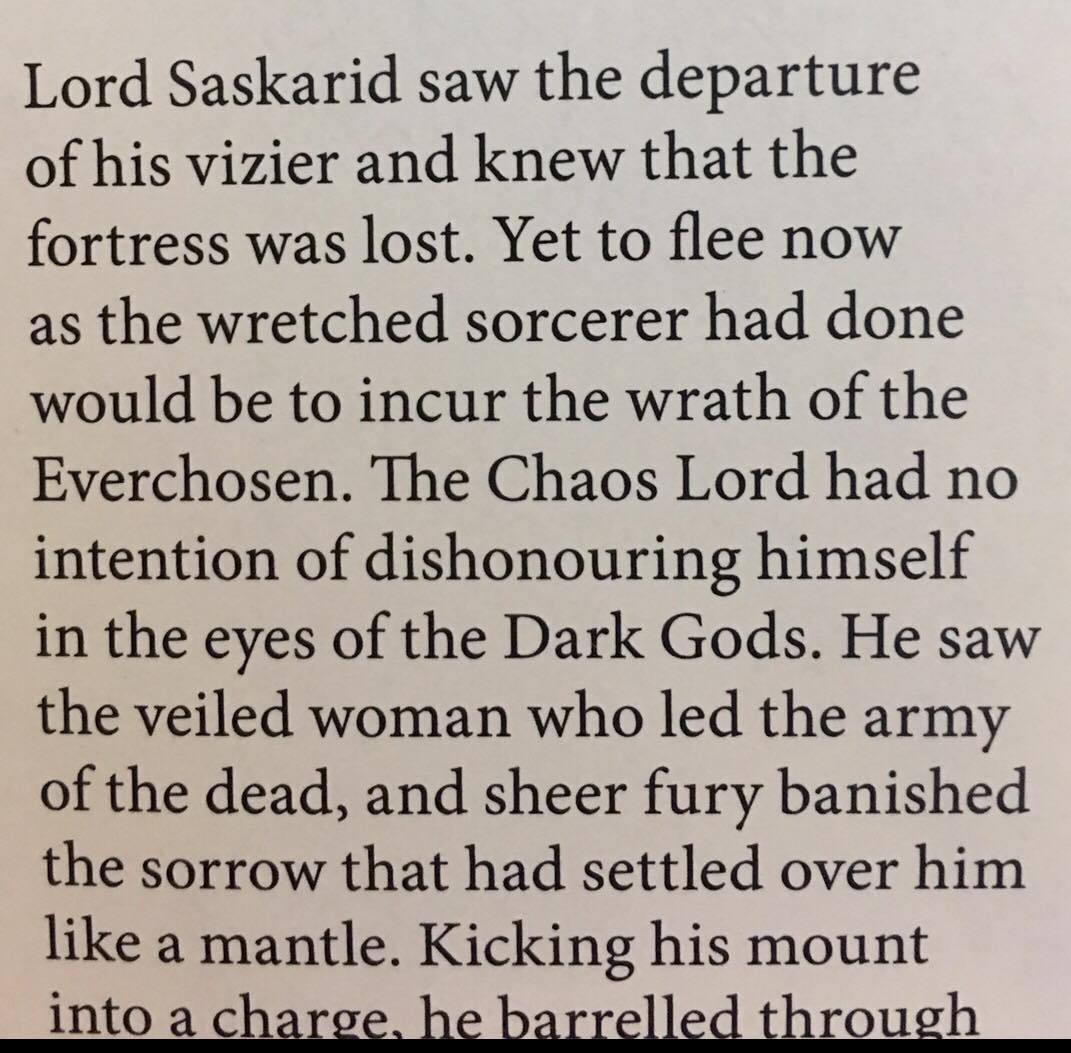 Note: that Beastmen and Bullgors are mentioned multiple time during this war and they are not present in the rules section :(

The Battle of Haradh's Torment is the second phase of Katakros invasion. The Gaunt wizard raised a big big big force of Nurgle, Khorne and Darkoath marauders and routed back Lady Olynder. Still, it all was planned by Katakros and he baits them in a good spot for a second Crushing victory for the Force of Death. 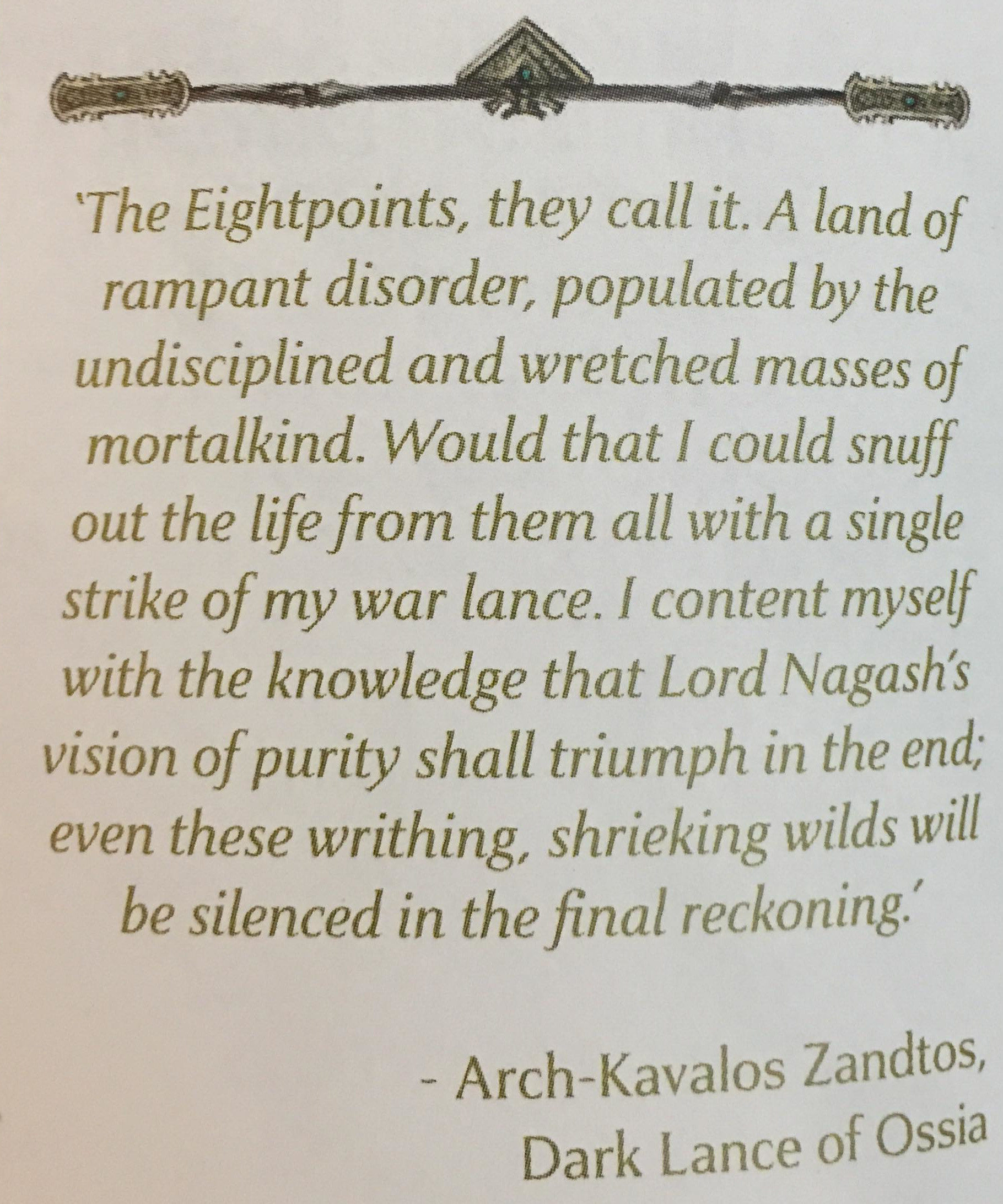 After the battle instead of pursuing the fleeing armies left, he start building a Bones Citadel. The Arx Terminus. It's really bloody the way they build it ^^ Gothizzar Harvesters cleaning bodies to supply material, to the "Necro Thralls of the builder caste". After a while, the old Chaos Citadel is replaced with a fortress, All but unbreachable.

More siege happens, but each time chaos is routed and using the bones material provided by the Flayed one Katakros finish his Citadel.
He then launches an assault onto the 8points, clearing the Chaos Dwarf citadel of any life in a long term goal to deprive Archaon of resources. 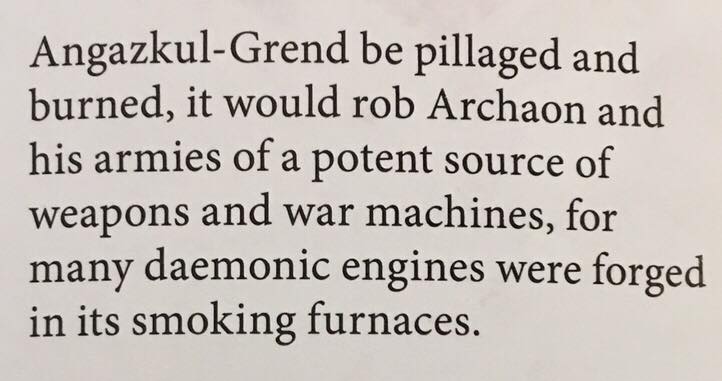 Then Katakros march to the Varanspire but Archaon comes home, furious that he was interrupted with Slaanesh and sure that the twins' gods are now going to repair and move the god prison! Huge battle happen and in the end Archaon crush Katakros while Be Lakor banish Olynder from the 8points!

Conclusion : As planned i was crushed 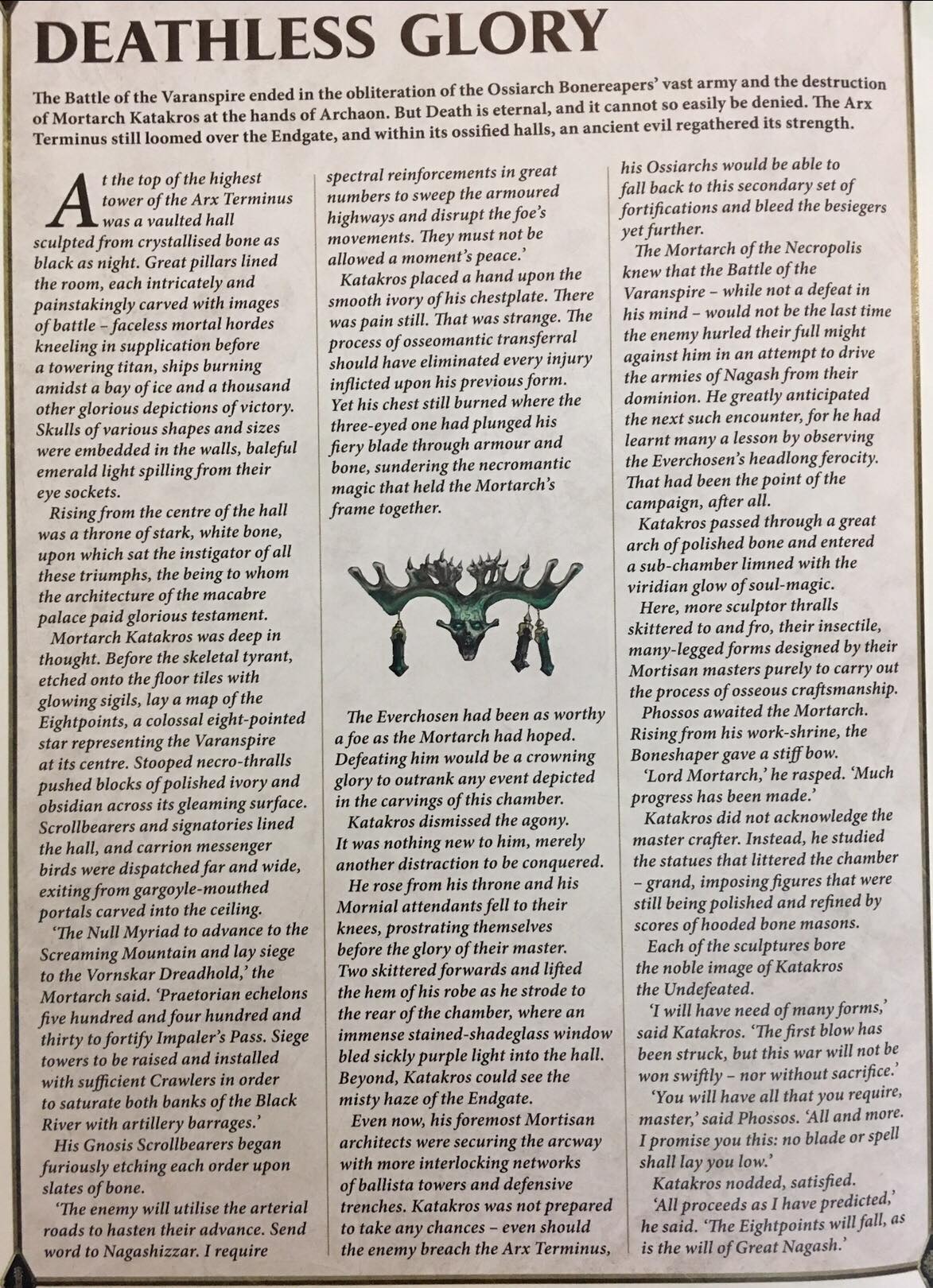 That's it for the review, I'll admit that I had a lot of fun reading the fluff of the Wrath of the Everchosen! AOS is still a fresh setting and this multi-way war is at the end, more interesting (to me ) than the Emperium fighting everything fluff.