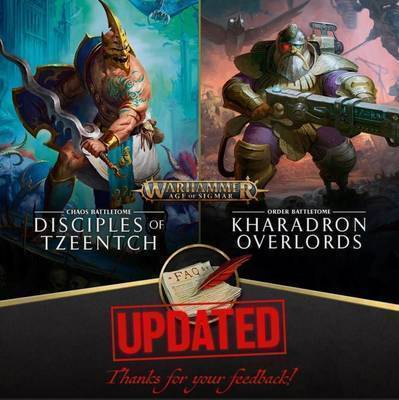 Small but important update for Tzeentch and Kharadron!

The Destiny Dice used during a morale test count as unmodified. That means you can use a 1 from a Destiny dice on a Pink Horror unit morale test including an Icon Bearer. Yes you pass and gain 1d6 Pink Horrors !!

can you start the game in garrison?

Q: When I set up a Skyvessel before the battle begins, can I
set up units in its garrison?

If the unit is not part of the same battalion as the Skyvessel,
the Skyvessel must be set up first, and the unit can be
added to its garrison when you are allowed to set up that
unit before the battle begins.

1) So if you are from the same Battalion you can start the game in garrison and you deploy everything at the same time as usual with Warscroll Battalion!

2) If you are not from the Same battalion, you can start the game in garrison if the vessel was already deployed.