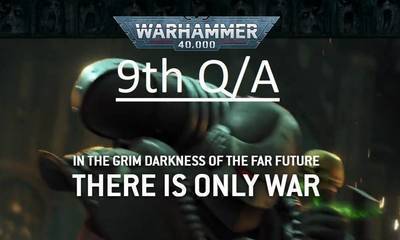 1) Vehicle melee / anti range horde in melee, what's in for Ork and nids assault?
Terrain going to help a lot horde and assault, the terrain more meaningful :
Terrain block LOS a lot, more work to get LOS, MORE TERRAIN, the amount of terrain used in BETA is written in the book. THE most balance experience needs the right amount of terrain.

-Leaving Combat is changing with some new core stratagem

2) TURN MECHANICS: No change, they keep the 8th turn system.

3) Reserve Change :
Spend command point to put things in reserve. you use CP to do what the commander of a battle would do. They are an asset the commander use.
So you can use CP to put units in reserve.
Units come in play in a later turn, and as more turn pass you get more option to enter (flank, back, deep strike ?...) It's a nice buff to melee army and you can hide your big boss turn one if you don't have the initiative.

4) TERRAIN RULES :
Not only to block los, but it's also more fun and more clear.
It's a nice system that means that the terrain has a nice impact on the game without being bothersome. It's not done by using a bunch of rules on top of another.
Ex: Terrain can get the "TAG" obscuring (block los). Different type of terrain will have different rules. And it should feel a different experience. The terrains is to be the third player.

Monsters and tank can both shoot in melee (count as pistol ?) and monsters got very cool rules

-More balanced mission in matched reducing skew list.
-Narrative & more immersive (they seem to be a lot more hyped about this one)
-Each of the ways to play will be improved by the mission.
-Improved competitive Mission, something new is coming that was never made before in 40k.

Mission is the 4th Players (terrain was the third)

7) Weapons with a random number of shots and explosive are still in the game ?

The random numbers of shots rule is still in the game. Blast rule mitigate randomness against hordes.

8) SW get the new bikes as well and DeatWatch too.

10) Old Marines: still in the game and are not leaving anytime soon.

12) New major Character is coming (beside the necron one) : ? some tease, about Christmas trees, but nothing substantial .

13) Death Korps rules ?.
40k team write all the rules now, for all the 40 models, even if they are in resin, metal, plastic. Books are coming to deal with the FW range (i realise now that i am super excited for this). I wonder if more stuff from HH is going to be included in the game. Maybe you can pay CP to add relics from an Old Ages ^^

15) Crusade Narrative: Will new codex include Crusade rules ?.
YES a lot of content in crusade comes from the codex released in the 9th. Fluff will be made into rules for the Crusade system.
Crusade is advised to starts at combat patrol, and as you gain points you gain new units or LVL your forces.

16) Missions are different depending on the army size. So you get the best play experience.

17) Core rules are a bit longer now (more than 8pages) but it's more about example and diagram. Rules appendix is included in the Corebook, for all the weird rules interaction.

18) Matched play and Eldar flyer dominance ?
MODIFIER cap at +1 / -1, so it's easier to hit them.
Flyer rules are Much more interactive. If for example you suffer from bombing or strafing run you can interact (with CP I guess)

19) Morale change :
Yes, combat attrition rule and more moral interaction, it's less binary now. Scary units should do more thing.
Before it was morale does nothing or the whole unit get wiped. Now it's going to be more interesting. Also terror troops should get more mileage out of their abilities.

20 ) More units to Warhammer legend?
Over time yes, very gradual...they don't plan to carve Chunk of codex each time...
Not a lot of movement. Don't stress for the tiny marines.

21) Cp generation :
Studio love CP, find it's an interesting mechanic.
CP are army size dependant, we all start with the same number of Command Points.

22) Power level still a thing :
Power level will be adjusted when it needed. not often but when it's needed. Slower update than Matched points but they want to maintain the integrity of the game.

23) Can crusade be used for Convention play?
Yes, fit 1 or 100 persons, it's your narrative.
It's possible to reconcile a matched army with crusade army. there are ways to even the odds.

25 ) Soup is still viable ?
Yes soup is very viable but is now symbolised by command points.
If you want stuff from more than one codex you have to pay CP. (in matched play)

26) New codex will include the best stuff of the PA book. maybe not everything will cut.

27) Cp scale with games, mission affect that as well.

29) Do I need to include troops? since CPs are free ?
Detachment will have a requirements depending on the one you want, but troops are not needed to unlock CP.

30) List build change du to CP :
More freedom, it's about the army you want to play and not the one you need to have to unlock CP.
Play the models you want.

31) What are blast weapons / and horde?
It's in the Appendix, Blast is in the weapon profile, like assault or heavy give benefit for shooting bigger unit.
Horde was not explained so I guess it's like in AOS for canon or some endless spell, you get a bonus number of shots based on the size of the unit.

Differents Stat line for intercessor assault Chain sword and marines Chainsword. (they made a lot of jokes about dual-wielding Imperial guard so it was not super clear but they confirmed that space marines/intercessor Chainsword have different statsline