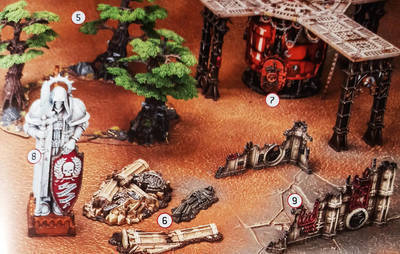 In today review, prepare to be Amazed because everything changed!

Terrain should be an essential part of the game. Sadly the 8th missed the mark with them, but this is over! The 9th Edition of Warhammer 40000 is smashing everything you know about terrains!

Terrain in the 9th

The terrain rules are the big game changer of the 9th editions. No game in the eight will ever resemble what is going to happen in a 9th Matched game.
Off course, all the rules displayed in this review, should are balanced by the mission, forcing you to move out of cover to try to win the game.

Before starting, I am puzzled that the free rules online don't have terrain or cover rules (unless I missed them), it such a dick move. You offer free rules, but not the interaction with the battleground? Wtf is that?

Anyway, let's start the terrain review with the rules included in the Core book.

There are four types of terrains in the 9th editions. All terrains must be from one of these big assortments.

Specific types of models gain cover or not depending on the terrains types. Note that having cover doesn't do anything ! but receiving cover from a terrain get you a bonus or malus depending the Keywords it has.

The 4 types of terrains are :

The hill is the first type of terrain described in the book. They can be free-standing or modelled into the battlefield itself.

They don't grant cover but can potentially break los if you are behind it.

This is los rule by the way is :

So, in a nutshell, the hill type of terrain doesn't do much; however, if the hill model is big enough, you can break or gain LOS. Note you can decide to grant your hills with keywords as will see soon.

Obstacle includes barricade, walls, statues, debris, box, container. This type of terrain regroups all the solid and limited in zone terrain. Models move over an obstacle using regular rules (1" or less ignore the Obstacle or move over if more than 1"). 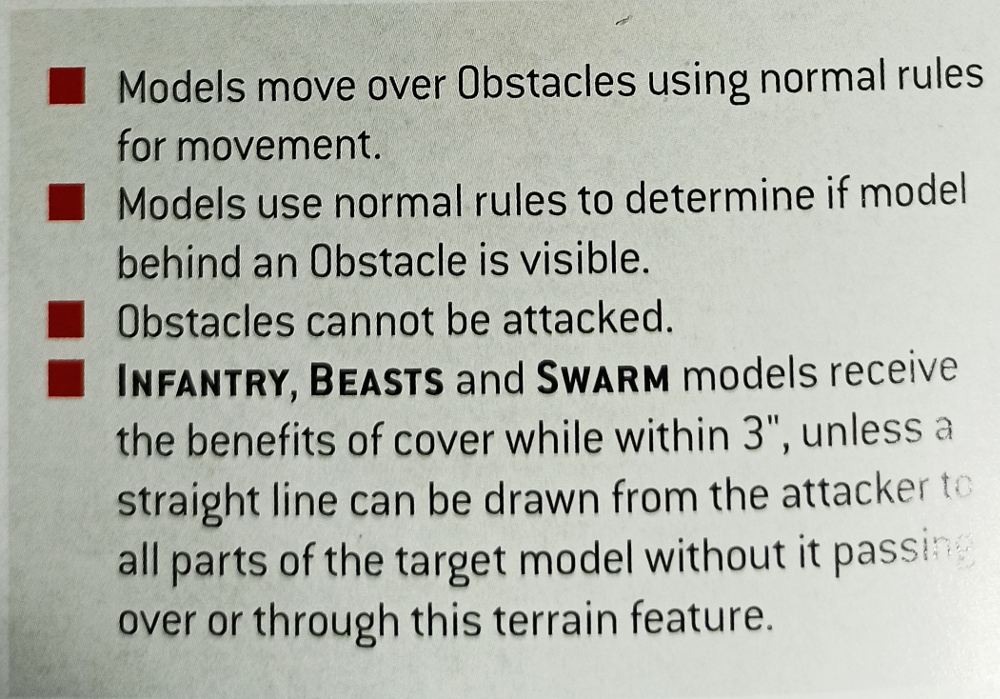 So, you can't attack Obstacle, use standard rules for LOS and MOVE. Grant cover if you are within 3" of it and the shooter has to shoot through the Obstacle.
Though the cover bonus is limited to Infantry, Beast, Swarm, so Vehicles don't get any cover from obstacle terrains.

I am happy to see Area terrain rules back.

Area terrain represents a zone of terrain with a defined limit, like woods, a swamp, craters. When you deploy such a terrain, players must agree on the terrain limit. Most of the time it's easy, but with some ruins terrains, you may have to define the area to be 100 sure. 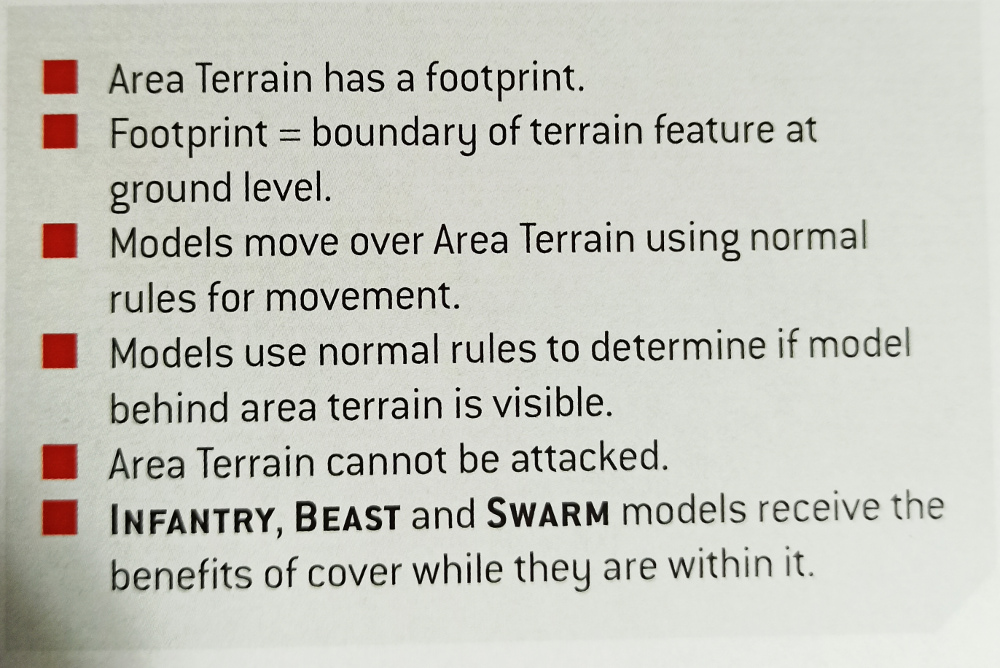 Like Obstacle, area terrain uses standard rules for LOS and MOVE. Models receive benefits of cover while within. So you solely need one "toe" in the section to get the full advantage.

Again the benefit of cover is limited to INFANTRY, BEAST, SWARM. So bye-bye cover for vehicles ^^

Buildings are paid with points by players, and their rules are on their corresponding Datasheet.

Buildings are units, you can attack them, you can't move through them, and you use regular LOS rules to see through them.

We have no details yet, but buildings should benefit from friendly aura if they have the right keyword?

After reading this portion of the rules, it looks like You CAN'T move over an enemy tau shield wall?

We'll have to wait for the online errata & the rules update dropping the 11th to get the complete rules.

Now that we understand what the four types of terrain are let's get to Terrains Traits !!!

Each terrain not only has a type (hill, Obstacle, area, building) but also have Traits. Each trait has specific keywords granting particular abilities.

There is no limit to the number of traits you can give a terrain. Both players have to agree on the traits before the battle.

The trait list
The first trait of the list only applies to INFANTRY. IMO it's the most exciting keywords as it allows a new charge reaction in place of Firing Overwatch.
The trait gives the unit +1 to hit in melee if you don't shoot or if you choose to overwatch you'll hit on 5+.

Note the wording: +1 to hit for the melee reaction (so don't stack with your other modifier) but the overwatch is hit on 5+ so if you get a +1 to hit overwatch somewhere you can stack it. (as you know in the 9th Warhammer 40000 editions, you can't benefit from more than a +1 or -1 to a roll)

The intent is to be able to charge a unit behind a small wall even if you can't reach it physically with your models (the plan is to prevent abuse I guess ?)

I think there is an imperfection with the rule. The charge target has to be within 1'' of the terrain to benefit from it. But if the charged unit can be 1.1'' away from the defence line terrain, it still gets the cover bonus and defensible benefit without the defence Line rule allowing a charge against you.

Note it also applies to vehicle standing behind a defence line terrain.

Pretty simple if the terrain has this keyword, like ruins, for example, Infantry, Beast and swarm can move through it without losing movement.

Minus 2, speed malus that applies to everyone but units with fly keywords! Wood is a difficult ground, craters as well, swamp could be too.

The name of this trait is chosen poorly and bound to cause errors. Dense cover has nothing to do with being in cover (see types of terrain at the start) .

The rule applies to Vehicles even if they can't get cover!

For example, Woods get the dense cover rule, so if you shoot at something inside the woods or if the shoot has to go through a forest, you get -1 to hit.
Doesn't apply to AIRCRAFT target or with a Wounds Characteristic of 18+
Note, AIRCRAFT is not a unit with the keywords fly but a unit from the AIRCRAFT list!

No link to the cover rule, just lousy naming. Something like: "hard to hit" would have been clearer.

Cant end the move on the terrain

Don't want to spend more time on this but, Fuel pipes are defence line and unstable. I fear some exploit where my unit can stand 1.1 " behind the pipes. That implies you can't charge/attack my unit from the other side and can't finish your charge move on the terrain...

Applies to box and container terrain, love this idea !!! 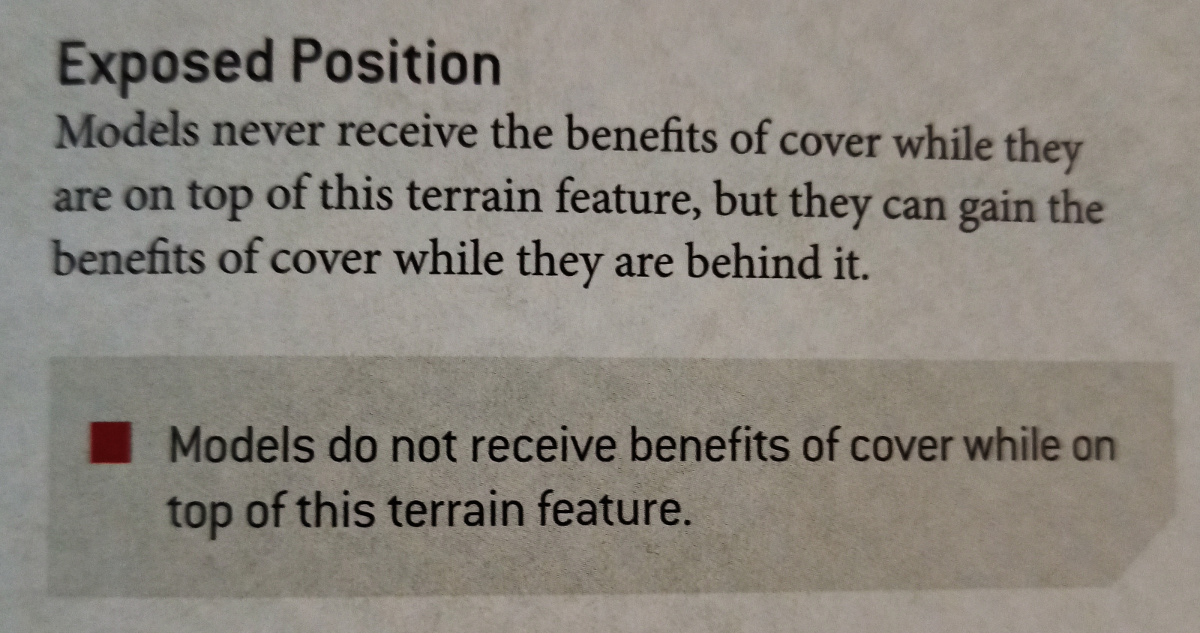 Terrain Block Los if the target on the other side.

All ruins example have this trait (but not wood ?) it should help lower LOS line turn 1. Apply to vehicles as while they are not AIRCRAFT or with 18+ wounds. 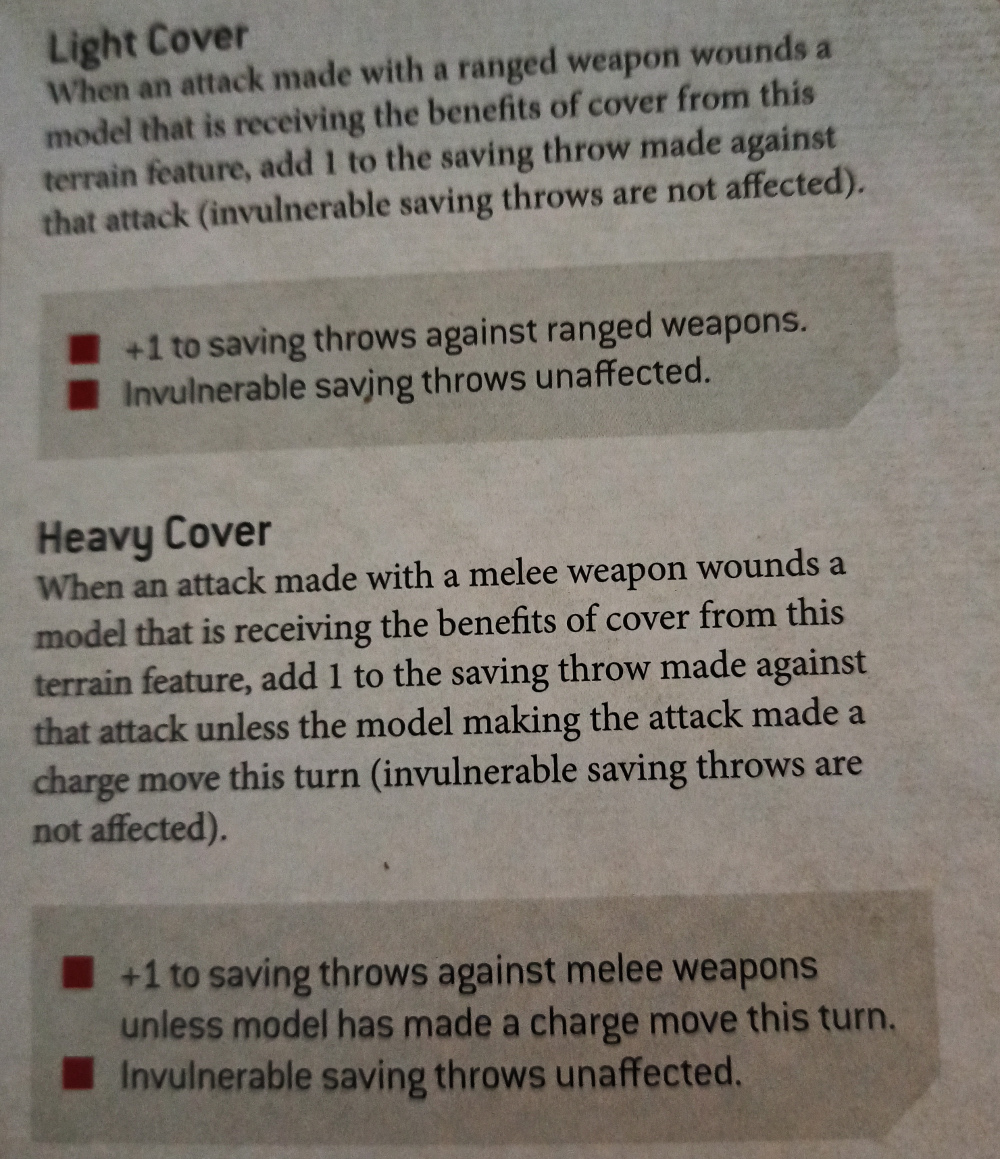 If you get to cover and the terrain has this trait you get +1 against melee or ranged depending on the trait.

You NEED benefit of cover to claim this bonus (so only inf, swarm, Beast) it's different from dense cover ^^

It's a perfect addition to the terrain rules & huge boost to melee Beast. All ruins have Scaleable & Breachable(nice !!!).

It's excellent and going to fix a lot of exploits.

Again tanks, while buffed by the rules, are getting nerfed by terrains rules.
Note that antigrav vehicle with the FLY keywords can still deploy on the top of ruins ^^

Great for adding interested to status and chaos icons ^^


Gw included examples of what trait should have certain terrains. They are the only guideline so you can do what you want. 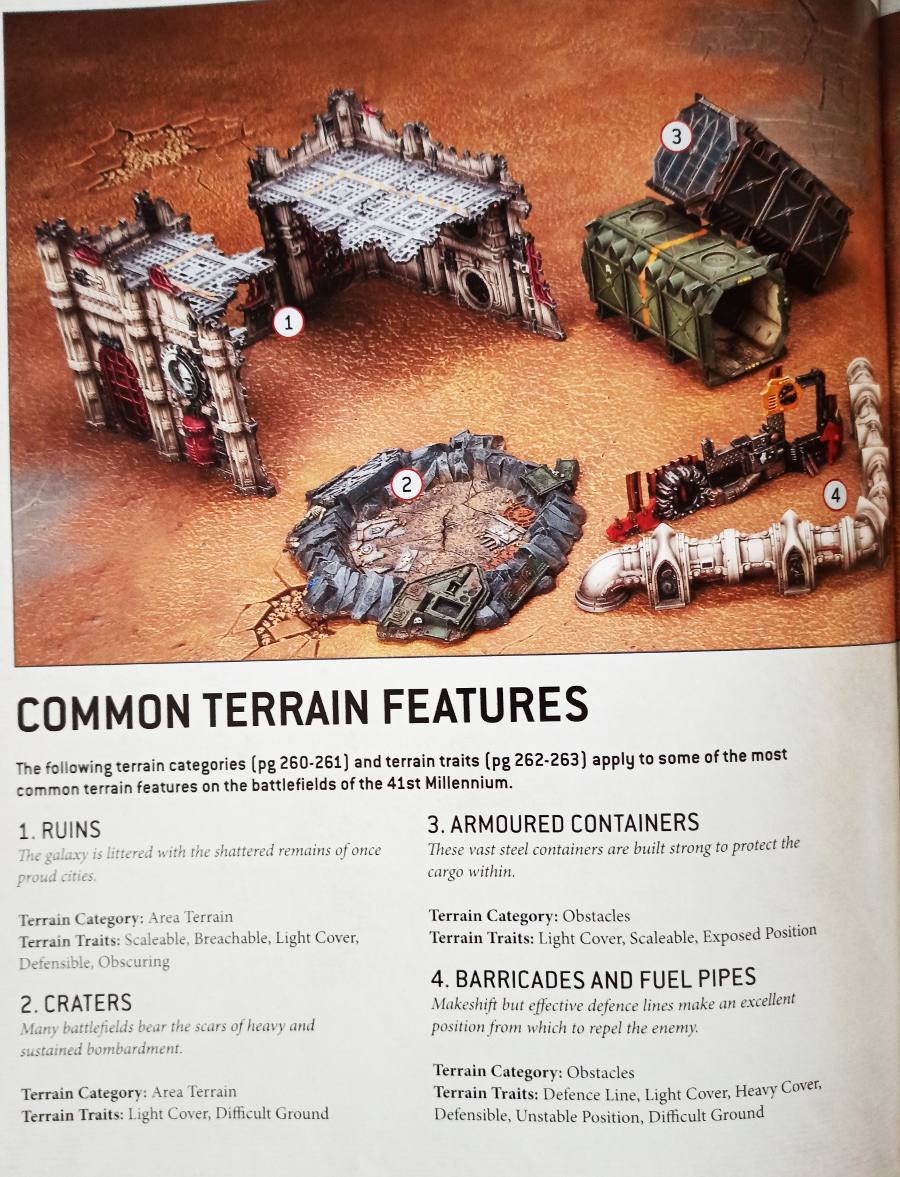 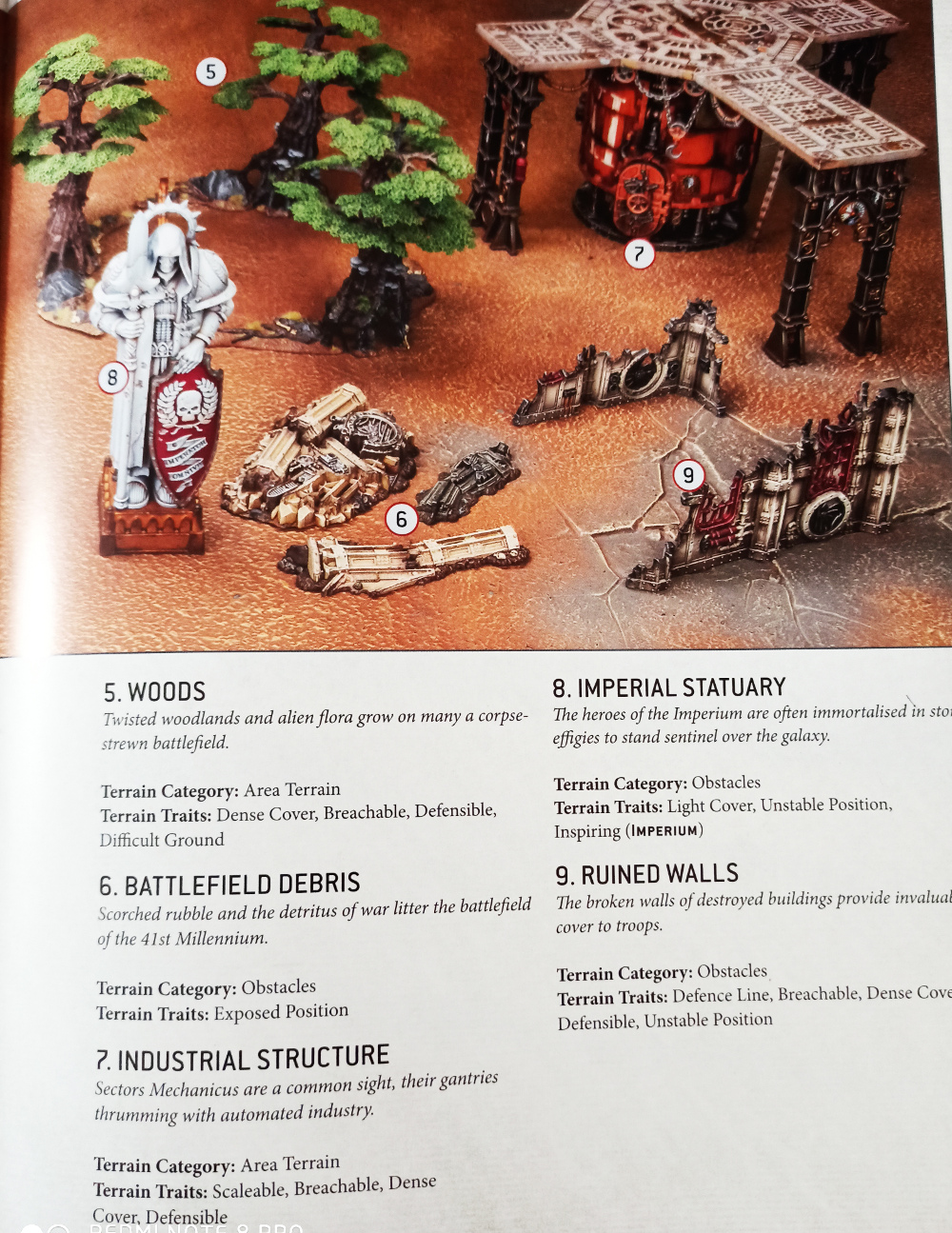 NOTE: In "matched play", these are not guideline but are mandatory!

Gw included example of what a good and fair battlefield should be : 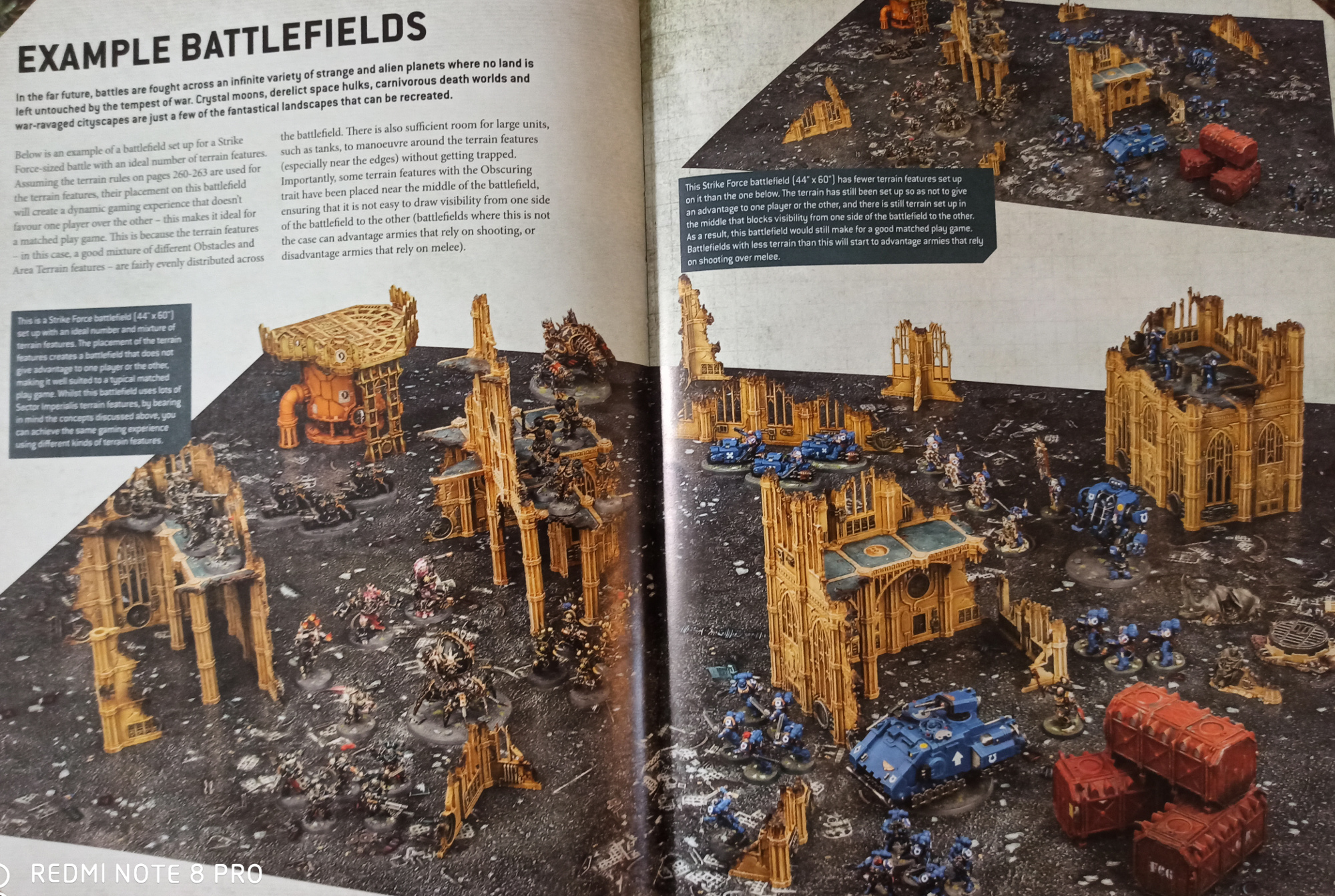 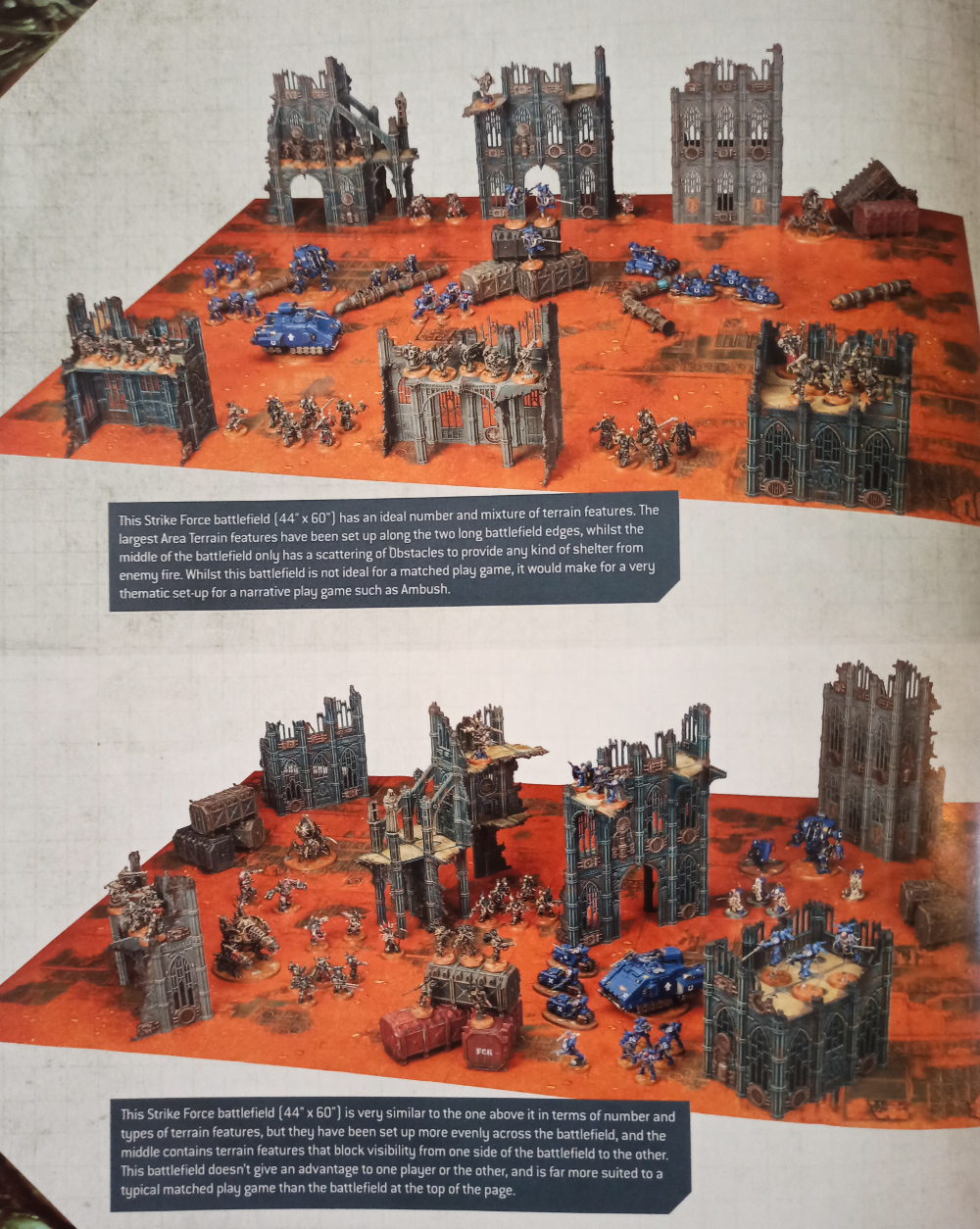 Time to conclude this review of the new terrains rules !!! It's the most ambitious change in the 9th editions. There are a lot of unanswered questions for now, but I find this method smart and new (for GW). I think it's going to work very well and create a much more compelling battlefield than in the 8th !!

That's it for now.