I prefer to focus this part on the matched play mission because it's "usual" standard you expect when you play a 40k game.

The core book comes with the Eternal War Mission pack. Each mission pack is a "Meta" with a specific theme. We can expect future mission pack (a new one is coming with the matched game companion on release day) that could change particular rules.

There are 13 steps before the battle start!
Step 14 is the actual start of the game.
Step 15 & 16 are "ending" and determine the victor.

Road the Battle the fourteen steps!

The First step is choosing game size: 500 / 1000 / 2000 or 3000. You usually agree on points before you show up at the table. For the review, we are going to choose 2000 pts.
Each player must use a battle forged armies. All units in each detachment must have a common keyword, but it cannot be: Chaos, Imperium, Aeldari, Ynnari or Tyranids unless it's a fortification Network. 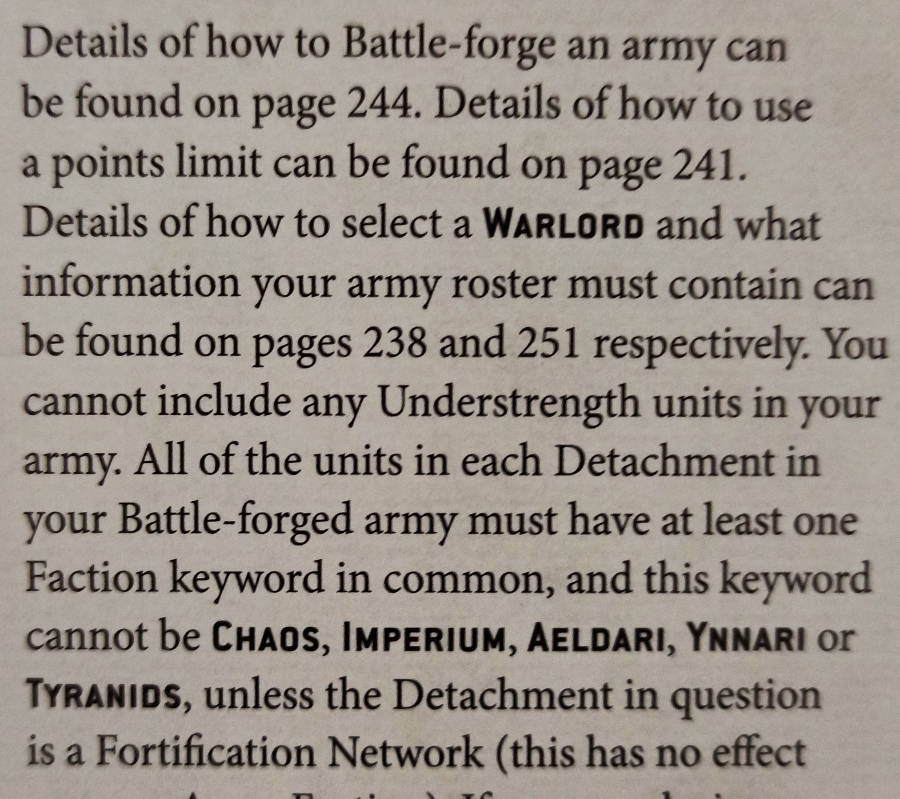 Agree or Roll it's up to the players. For the 2000 points level there is 6 missions : 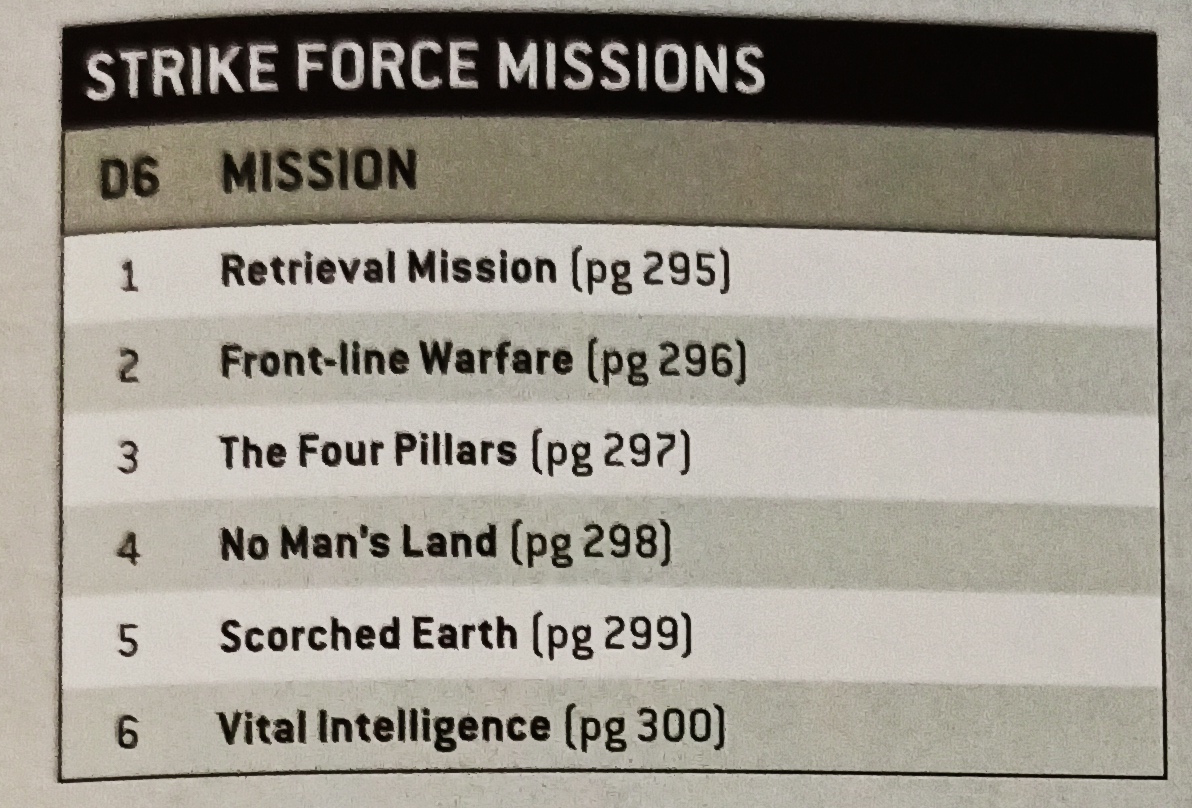 The theme of the Eternal War Missions Pack is Capture and hold. All missions revolve around keeping some objectives.

In this case, imagine we rolled a three we would play the Four Pillars Mission. 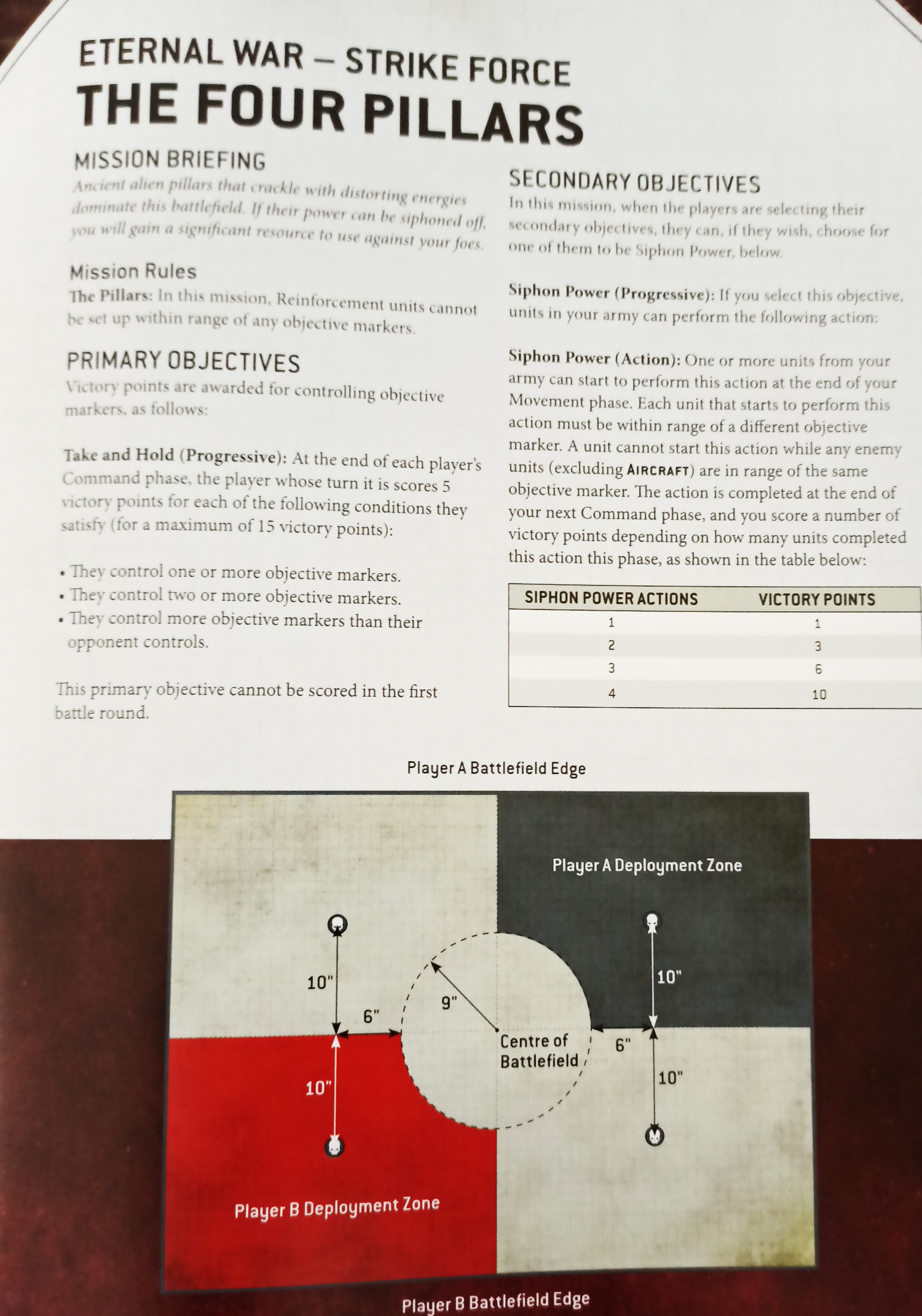 You set up terrain as explained in the terrains rules 266-269. Not that in Matched play, terrain feature serving as an example on page 264-265 is mandatory. So all woods have the same rules in Matched Play, same for ruins.

You can secretly select three and (more details later), but you can also choose from the mission.

A crucial step, you must decide who to go in reserve before rolling for initiative & it's the same for transports.
No more than half the army can be kept in reserve.
After turn three if they have not joined the battle unit kept in reserve count as a loss!

Alternate deployment until you deploy everything.


Roll-off, the winner chooses if he starts or go second.
Weirdly, the initiative has no link to the Attacker roll at step 8.
I hope for a FAQ or clarification as it seems weird...

Use all the before battle start rules and stratagems. Note that stratagem modifying the roster (like transforming a unit into veterans.) are not allowed now.

In the 9th editions, Primary objective Worth up to 45 pts and each secondary up to 15 pts. The last 10pts depends if you painted your army!

Note that this is only true for the Eternal War Mission Pack and we don't know how the next Mission Pack manage points.

That Mean you already have some info on your opponent's army, terrain, missions at this points in time. Choosing the right Secondary will be VITAL if you want to wins games.

Also, having no models on the table doesn't count as an instant loss. It just means that the surviving army can play until round 5 without opposition. But with the scoring limits per turn, it's imperative to start scoring ASAP or prevent easy scoring and then crawl back...Imagine getting tabled end of turn three after focusing on getting full points. With two turns left and only 30 pts to score on the Primary Objective, maybe you already won. The Secondary scoring is harder to predict, but it's 3 to 4 per turn up to 15 per Secondary.

>What is important in this mission pack ?

Objective Secured, durability and movement these three stats are the most important in this mission pack. All six missions Primary Objectives are about securing objectives; of course, Objective Secured ability is essential.
Most of the time, there are multiple objectives to hold at the same time, so you probably need MSU (multiple Small Unit)to perform well. 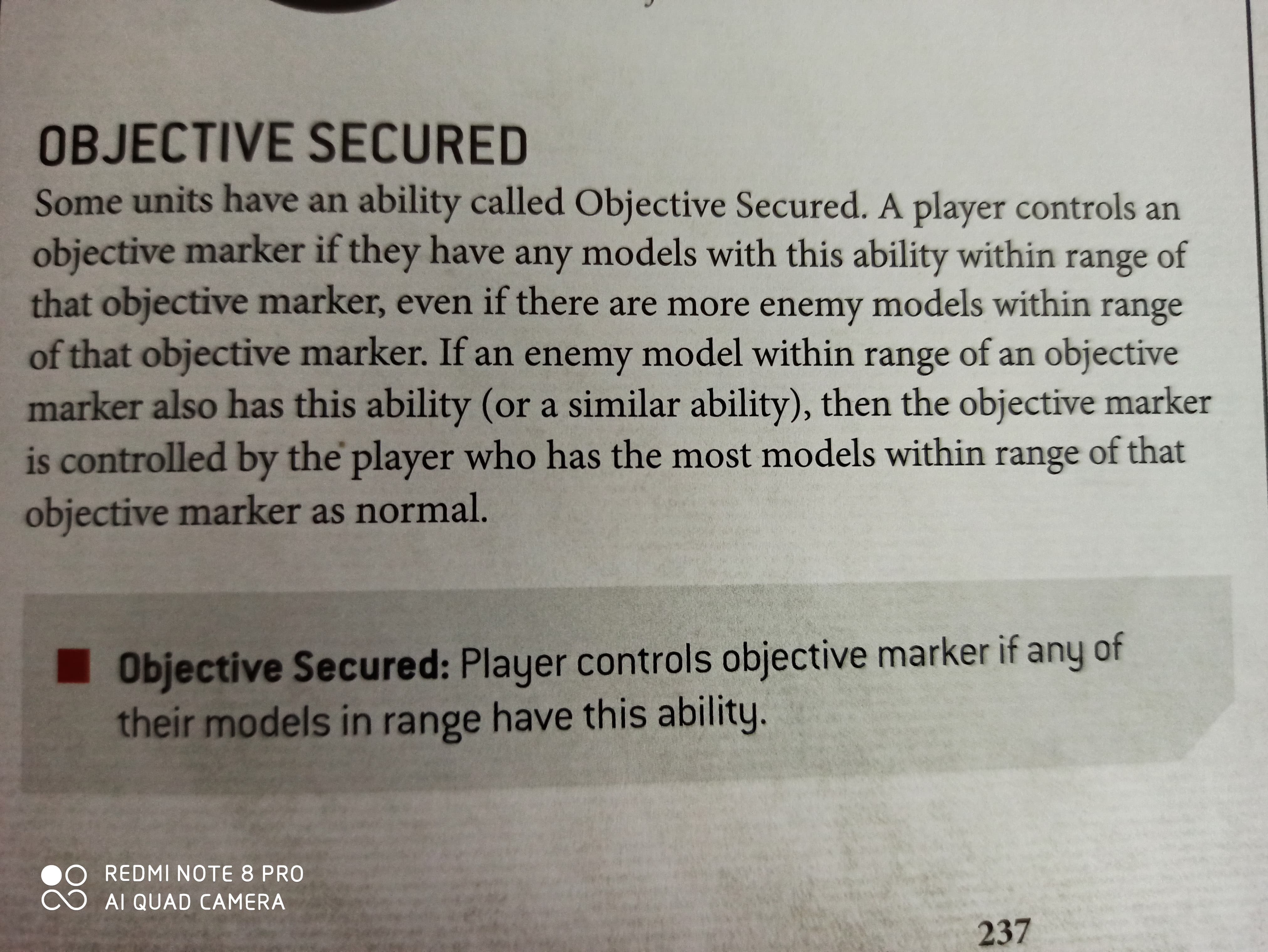 Without Objective Secured units on an objective, the opponents can just come and take it with one model ^^

Choosing Secondary is going to be tricky and exciting (I think). Off course I don't know what the Secondaries of the next mission pack are going to be. I hope they are the same for this season. It's hard knowing 25+ secondary and their interaction this early in the 9th.

Anyway, there are five categories! 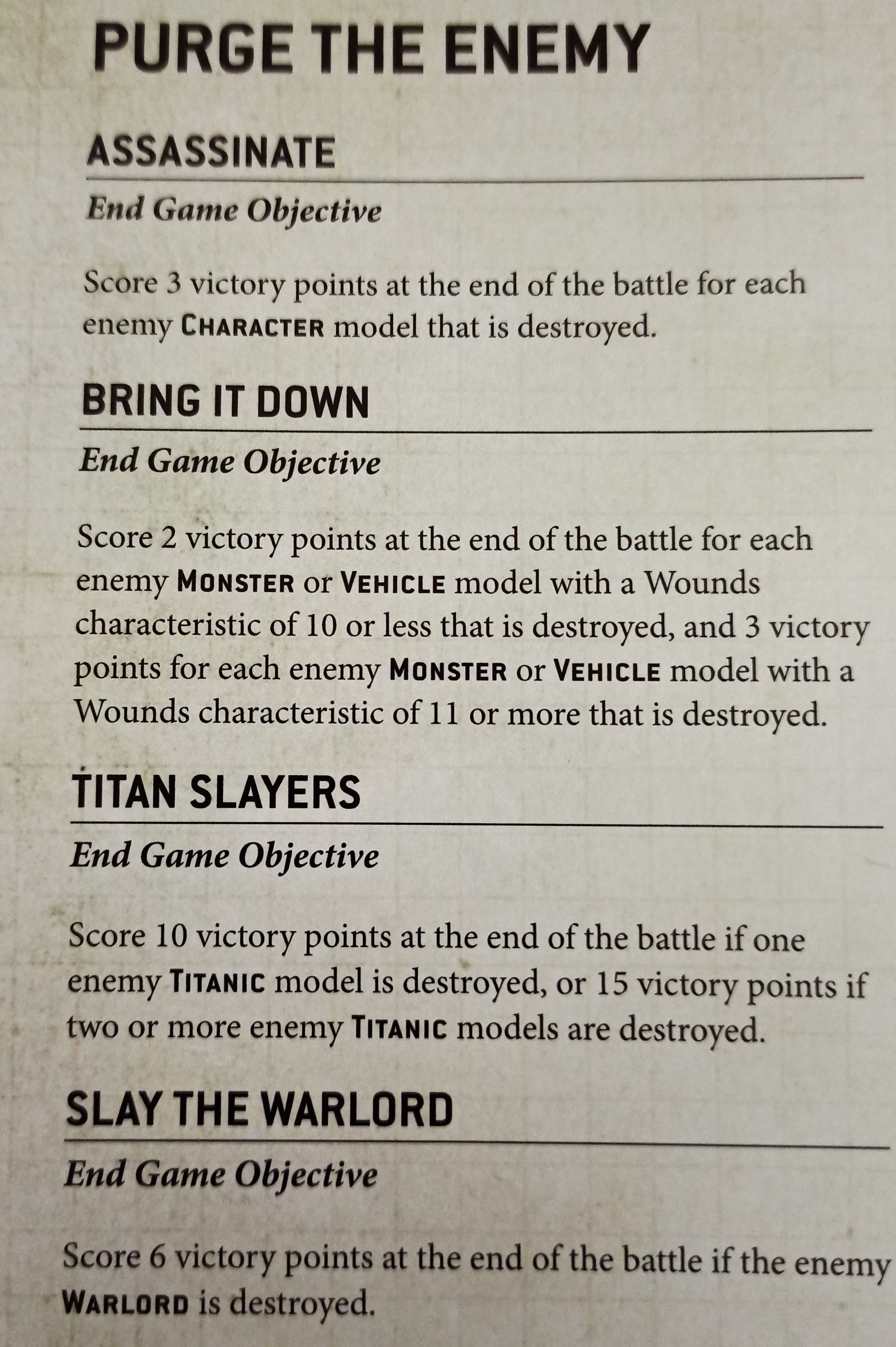 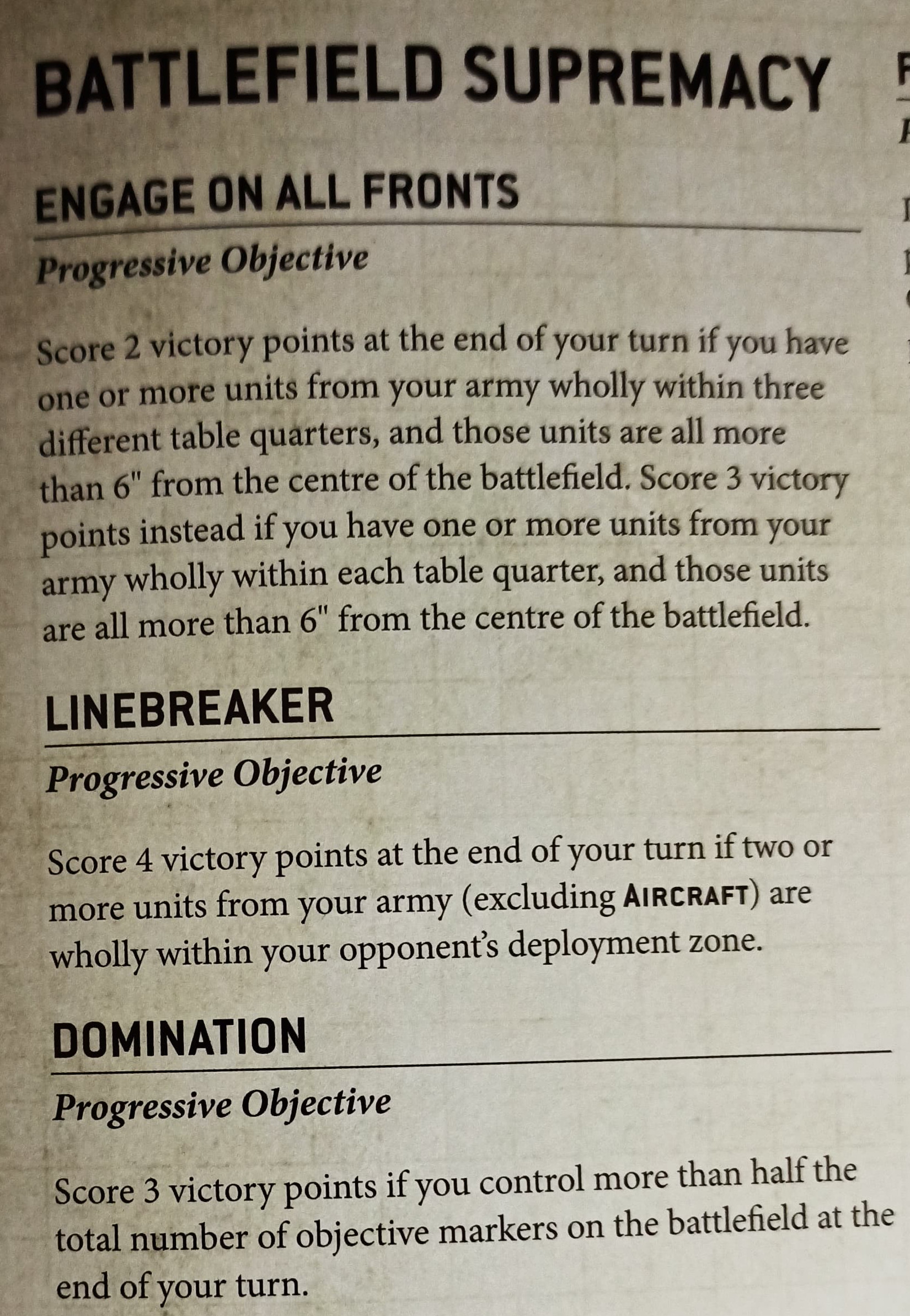 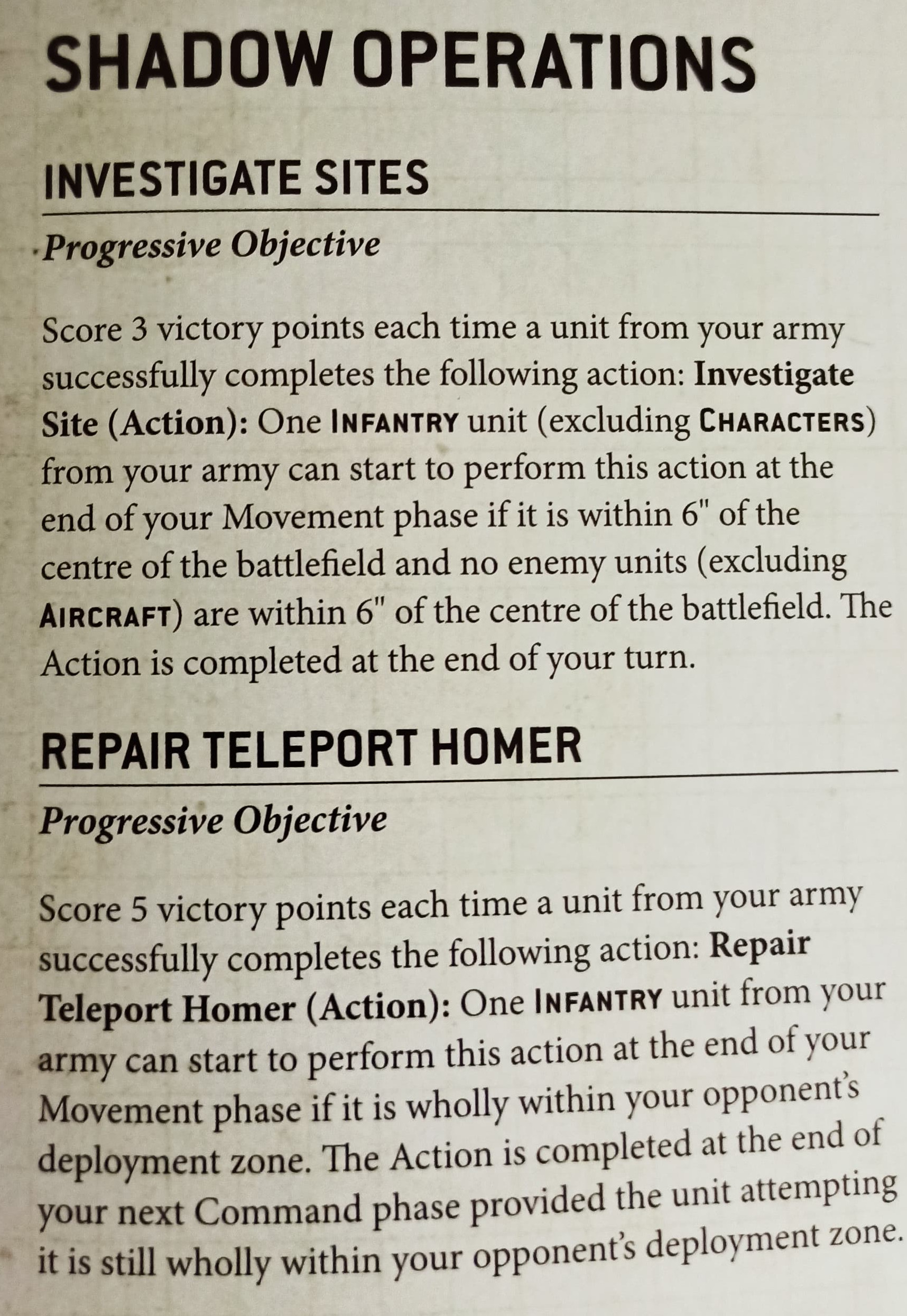 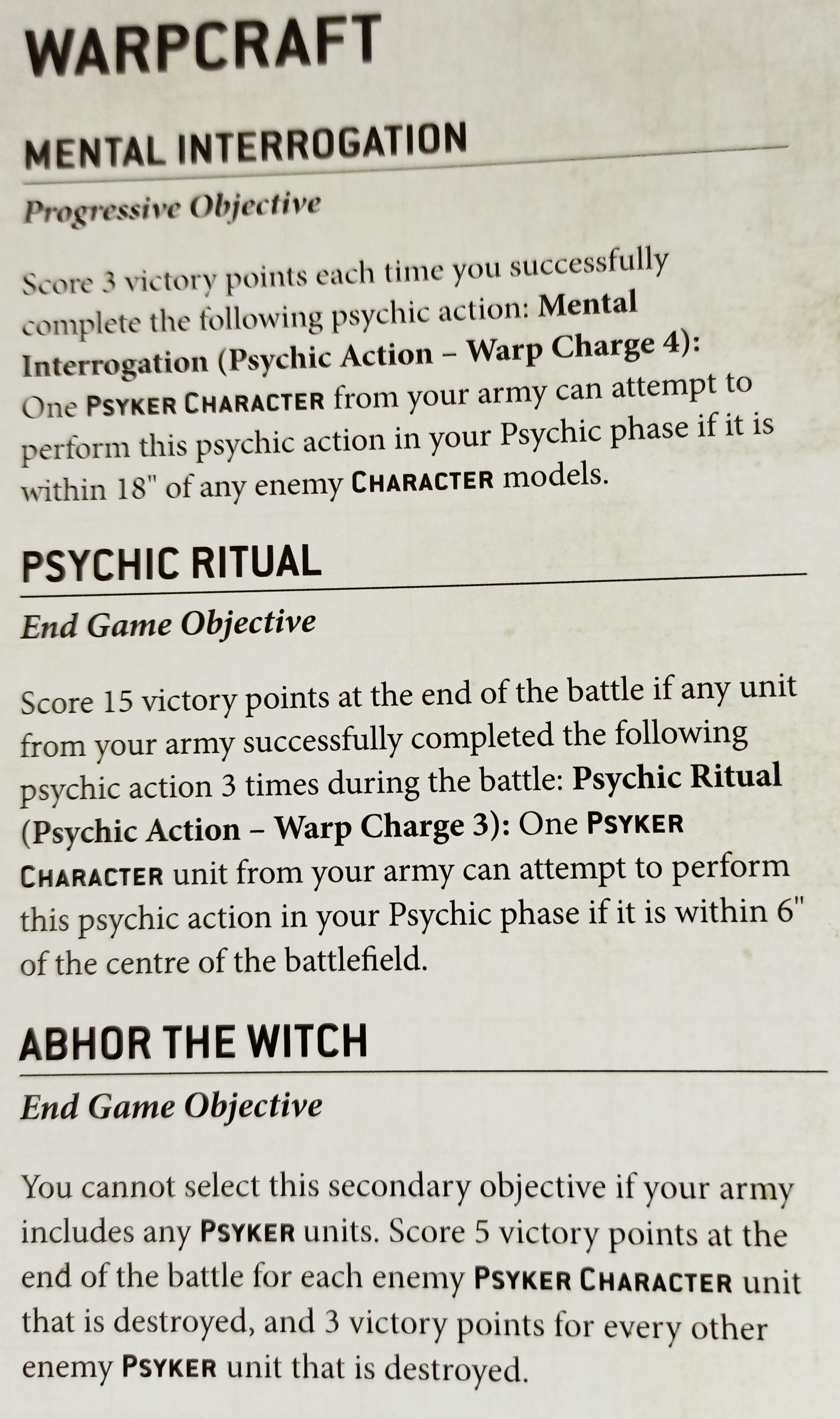 But that's not all, each mission offer a secondary that you can select : 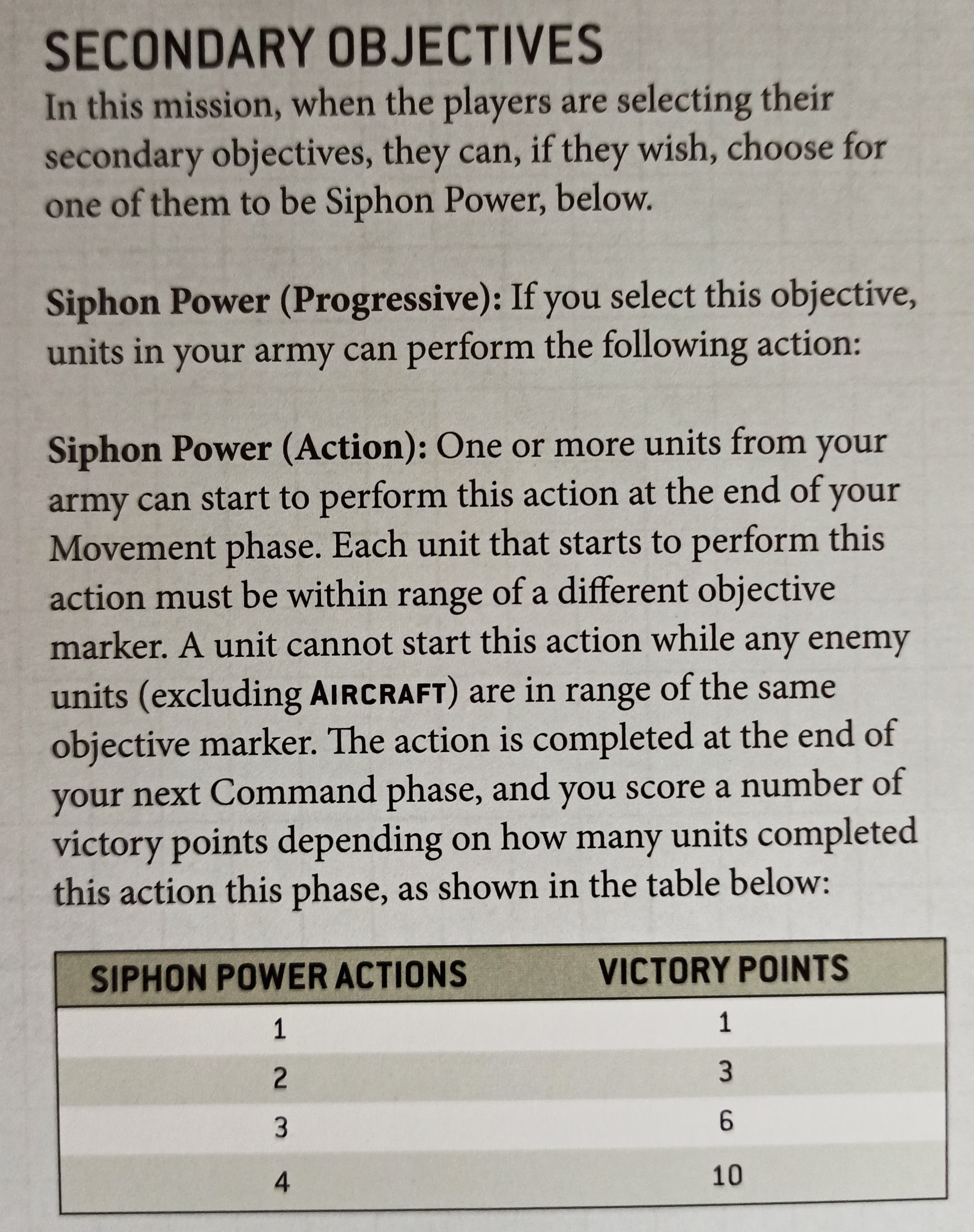 Secondary Objectives needing actions are ok if you have units that don't have great weapons like five space marines or Necron. But if you only have super kill-ly Eldar units or Elite stuff better use these actions on attacks. In that case, don't choose the Secondaries Objective that uses the new Action Mechanism.

I am Hyped to try Warhammer 40000 competition, more than in many years. This Mission Pack Meta seems excellent! Can't wait to try it with: new small board + points updated + terrains + all rules updated for 9th!

Off course this is only the matched aspect of Warhammer 40k, and there is much more to do!