Guild Ball : SteamForged Games ended the game (and it's the players faults) 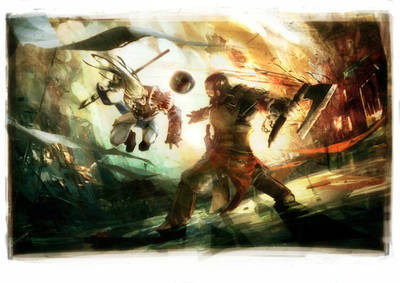 Today Steamforged game announced the end of the Guild Ball game.
In itself, this is not a big surprise as the player base shrunk a lot this last 2 years.

To be honest this game is maybe one the best competitive game i ever played and it's a shame that SFG was so bad at managing it...

As an example: for all 2019, most of the models or teams were not in stock and it was very hard for new players to find the models they needed. How can a miniatures game survive one full year without models to sell?

Today the SFG CEO and Guild Ball creators gave us a very interesting farewell note. Here one of the best passage :


We set out to make the cleanest, most balanced miniatures game you could play at that time. And we achieved this hands down, flat out, nailed it!

Guild Ball truly was a competitive player’s dream. It rewarded player skill and experience, with a very flat probability curve to minimize variance. The competitive scene grew and grew.

But this ended up hurting the lifespan of the game.

Guild Ball became the type of game where you win your first game (demo) and then lose the next 100 games. When matched against a lesser skilled or inexperienced opponent, a better player would simply win the vast majority of games.

As the competitive scene began to dominate, the design space for wilder, more ‘fun’ elements began to shrink. New minis were either ‘OP’ or ‘trash-tier’ the second they were announced. Why take a new model when model XYZ already filled the role?

The style of gameplay changed to low-risk, ultra-conservative play where the ball was often deliberately side-lined.

This wasn’t the Guild Ball we envisaged.

In a nutshell, SFG affirms that the Community was the reason the game crashed oO. I am not sure it's the best PR move you could make while killing your most popular franchise...

It's kind of sad but maybe the game will survive on his community like BloodBowl did.