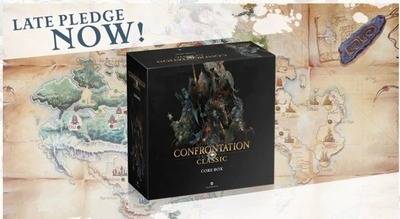 Another one bite the dust !

I think everyone remember the confrontation kickstarter. The thing started so well with close to 1 millions in a few hours and because of some management red flag the campaign ended at 400k ?

Since the 08 august the companies edition sans détour filled for "Liquidation Judiciaire". Without going into details it's the worst form of "procédure collective", that you use when the activity stopped completely and or the business can't be saved anymore. It's troubling the edition sans détour went from functioning to Liquidation without using the other 2 steps (there are 2 previous step used to help the company surviving). Especially when they are "salarié" (employee) .
Still the company was only a SARL (a form mostly used by a small group of the physical person running a business like a shop) and with a low yearly income. I briefly checked their legal documents (you are forced to publish them in France) and nothing weird is showing. It was just bad management, but I can't exclude the possibilities of the "gérant" having saved some money somewhere.

I was starting to look very bad for them in Dec 2018 when they lost Call of Cthulhu licence(didn't pay royalties for 2years) and went into conflict with Mayhar for the creation of a highly anticipated p&p rpg "Aventures".

Recently an employee from Sans detour made a post about his experience in the company: https://rafiot-fringant.com/retour-sur-sans-detour/.

If you don't want to read the full story :


It's sad it ended like this, the Cthulu books were very good but heh it's life :(

https://cadwallon.com/ is working confrontation (but i don't know much more honestly)

I am finally officially free, released from any obligation, after 12 years. I received the termination letter. The Sans-Détour period, a company I helped found, is now part of my past. And I am relieved. So much so that it's hard to imagine. So yes, there were some very beautiful things, but unfortunately overshadowed by a descent into Hell.

What I'm sharing in this article is just my experience, what I know, and what don't know. I am writing these words because I have seen so many comments, questions, and true truths come and go with bombast being nothing but a tissue of rumors and unfounded allegations. It therefore seems necessary to me to put things in a factual way, because I do not put any faith in the diatribes of those who claim to know. We even hope that it will enlighten them a bit and that they can take the necessary step back.

First and foremost, it's important to understand that Sans-Détour quickly became a two-headed entity, with the production team on one side and the “big guys” with a financial vision on the other. That the employees' offices were located in Nancy, away from decision-makers, with e-mails and a quarterly meeting as the main channel of communication.

This mode of operation could very well have been viable, if the two branches of this entity had not taken different paths. How many times have I read that the books are superb, the quality is great, but the management is dire? This two-headed aspect gave the beginning of an answer to this state of affairs: a production team with the objective of releasing beautiful, quality titles. And on the other, purely financial goals.

So yes, I know it takes both for a business to run. And I have nothing against that.

Again, the problem is not so much the "structural" state of affairs of this current model. But the dichotomy that resulted from it. How many times have we received directives such as "we need a crowdfunding that has such and such a financial objective by such and such a date", all within very tight deadlines, to have to improvise in a month a project which, under normal circumstances, should have taken several.

When I think back to the year, if not more, that it took me to orchestrate the simple and collector's edition of "Par-Beyond the Hallucinated Mountains" or the first edition of "Masques de Nyarlathothep", it's a miracle of having succeeded in releasing such imposing titles thereafter, within increasingly tight deadlines. Wondering where worries like "the plastic steel criterium" or the faux duck tar leather satchel come from? Look no further: very tight deadlines and reduced production costs, all imposed in the name of profitability and profit.

Already, at this stage, as editorial or / and artistic director, I only had the title, because in fact, I was just asked to manage a project imposed by purely economic choices so that it would be the most profitable. possible, with the means at hand (yes, I know, given the sums collected, it may seem ubiquitous, but it was indeed the case). If I am writing this, it is not to absolve myself of some responsibility, because if only to accept this fact, I had it.

It went on for a while, but soon enough I couldn't take it anymore. Really more. It was all too far from my aspirations, from my philosophy. So why didn't you slam the door, you will say? Simply because to do that, you have to have the means or the opportunities. And like many, I need to fill the fridge ...

Add to that the disastrous internal communication between these two halves of the entity: not only did we no longer speak the same language, but as employees we found out through networks or external contacts what was going on. Learning about the loss of the Call of Cthulhu license along with everyone else when we were told internally that there was no problem ... It's pretty magical, after all. I know, it's hard to believe, and yet ...

Let us now move on to the thorniest subjects, which crystallized a lot of reactions, provoked a lot of debate. Adventures and Confrontation. In my opinion, these projects have concentrated all of the aforementioned flaws, and more. A logic of cavalry. Because in hindsight, I'm convinced, it was just that: empty cash registers with the urgent need to bring in cash, without any consideration for the project itself.

I was in charge of the Adventures file at Sans-Détour. And everything was going very well with Mahyar. We had passionate and productive discussions every week on the construction of the game, the editorial line, and it was going well. I even saw a rich and interesting universe looming, more than the show already allowed. In short, it was the possibility of transforming an urgent crowdfunding into a great project.

But it all came to an end when I found out through email exchanges that even other Sans-Détour writers were no longer being paid, contrary to management claims.

The legitimate requests for accounting elements to produce the game having gone unheeded, a legal procedure followed, in order to obtain these. And Sans-Détour has remained silent. Until the day of exchanges by interposed press releases. I quote: "It is with amazement and incomprehension that Sans-Détour editions have learned ..." While for several months there have been explicit, written, legal requests from Mahyar.

I believe it was at this point, which coincided with Chaosium's public announcement of the unpaid royalties on The Call of Cthulhu, that I definitely understood that there was nothing more to save. That the facade of Sans-Détour editions was no longer a game of untruths, and that even internally we did not know what was going on.

And it took two years after these incidents to finally see the conclusion. Before I get to that, I would like to talk about Project Confrontation. I didn't participate in this one, so I saw it from a distance. The only intervention the Nancy office had was limited to the graphics. Not even access to crowdfunding to possibly react to comments ... In short, we had no control at all. For us, it was incomprehensible to see the launch without any team presence on the kickstarter to answer questions from underwriters.

And even if later, according to the great financial visionaries, it was a great success, I myself had no doubts about the disaster not only of crowdfunding as such, but also of its consequences.

One of the most common questions I have seen on social media over the past two years is "where did the money go"? It must be said that it's a hell of a lot, these two cumulative funding ... Frankly, I do not know. Because even by torturing our brains with all the possible calculations, knowing that no one has been paid, or almost, by removing the amounts of known wages, the charges ... we can only ask the same question: where is it money?

After all these adventures, expectations, anxieties, here I am finally free from a more than burdensome situation. Spending years, and I weigh my words, bound by contract, unable to do anything, not able to express myself, not being able to say what I thought about the situation, is not only terribly frustrating, but destructive.

Spending two years getting paid being shelved, with nothing to do, when I offered every possible legal solution to breaking the contract, is incomprehensible to me. My only assumption: I was being pushed to resign. Which was not possible for me. I know, it's mind-boggling to think that a TPE would rather hold someone down all this time rather than come up with a quick and easy arrangement. If you don't believe me, I couldn't blame you, it's such a huge situation.

In any case, all of this will have taught me a lot. Especially the things that must not be done. At least I took advantage of this time to prepare my personal projects, under the colors of Rafiot Fringant, in line with my values.

These latent projects that I could not develop during those "Factory" years where internal creations had no place, because only potentially juicy licenses were worthy of the catalog.

So, with my freedom, I can fully express myself, let myself go, try things out, rediscover the pleasure of writing in order to write, without financial obsessions, without results objectives. Become the craftsman I never should have stopped being. Here are some projects in progress and already well advanced in my reconstruction process.

A board game with soldiers and dinosaurs, to play with the toys of our childhood, Dino Soldiers, and available in PnP.

A narrative role-playing game, based on blackjack mechanics, which is being written and will be released soon, Tribute. A UFO which I hope will find favor in the eyes of its public.

And a new edition of Arkeos, which I've been working on for a long time, is in the pipeline. Make a new look with this Indiana Jones universe that I still cherish so much.

And for those who would like to know more about my journey, you can read this article.