War of Sigmar
created : 8 days ago 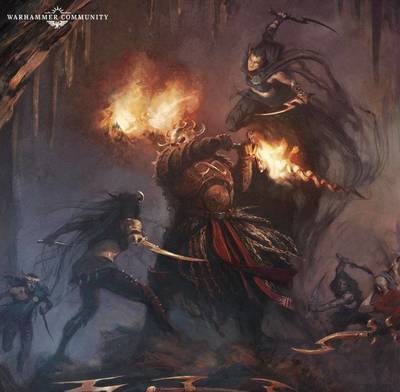 Some new fluff snippets from WHTV. It's about Catacomb the new season/extention of Warcry !

If you don't know what is Warcry Catacombs and want info : go here

Varanthax’s Maw : Catacombs takes place in and around a vast, infernal forge that lies beneath the Skullpike Mountains.

Scions of the Flame

These one are interesting !


Hand-picked agents of Morathi, Khainite Shadowstalkers are each branded with the shademark, a sorcerous pact that grants its bearer supernatural abilities while binding their souls to the Shadow Queen’s eternal servitude. Able to dart from shadow to shadow and land a killing stroke in the blink of an eye, Shadowstalkers are master assassins all.

Khainite Shadowstalkers can utilise the arcane pathways of the Umbral Web to travel vast distances in an instant, making it possible to hunt their prey regardless of where they might seek to hide. To be marked for death by the Shadowstalkers is to be doomed to die without warning, for few of their quarries ever see the danger coming before it’s too late.

The boldest of the Shadowstalkers even forge pacts with shadow daemons, becoming one with the darkness and bleeding nought but abyssal nothingness when cut. These deadly hybrids can even command the shadows of their prey to do their bidding, throttling their owner or stabbing them in the back with blades formed from their own twilight reflection.

Still No mention of Malerion (again).
But with the inclusion of Elves doing a pact with Shadow Daemons. Maybe we are going to learn something new soon (i hope he's not retconed into oblivion ^^)

So what do you think of this ? Malerion soon ? Never ? Shadow realm is now Morathi exclusive domain ?