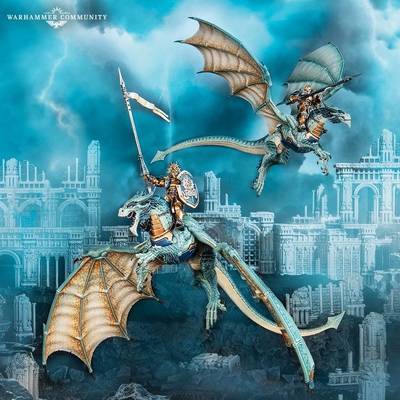 Dragons are coming at last, but nearly everyone was scared of their power level. So GW decided to do a Balance Pass before they even got released.

When you think about it, it's the second nerf they got even before their release. (first, nerf was the -1 to wound command trait affecting all your monsters on the table). I think all these nerf were deserved and well done GW.
Still I wonder how these batshit crazy rules/points cost could be printed in the first place....Well

Now I think Fulminator are a bit better in charge power but you can still do this combo :
1 knight + 1 unit of 6 drakes (count as battleline) for 1300pts. Combo play is easy, move or teleport + move during hero phase, Draconis + Command let you shoot twice during hero phase + once during movement phase then you charge something.

To conclude, it's good they nerfed them before people made an army of 12. They can now announce pre-order tomorrow ^^