Hello everyone, welcome to the 9th codex space marines top 10 units This post will regroup all the info and the news on this release 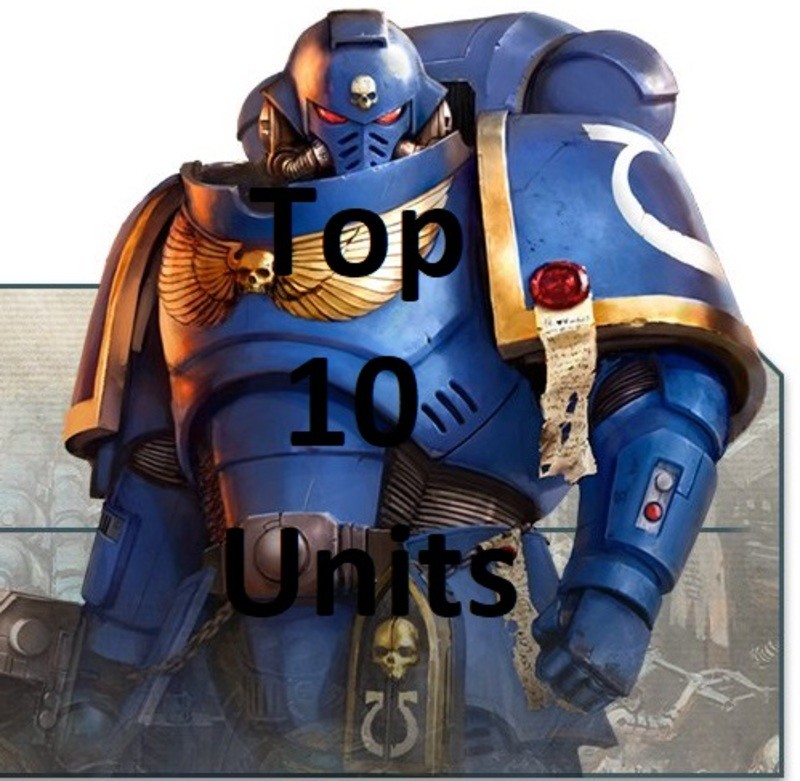 After a careful read of the codex, here my Top 10 units & Combo from the new space marines codex.
I can't be 100% of what the meta is going to be but you can't go wrong with these: 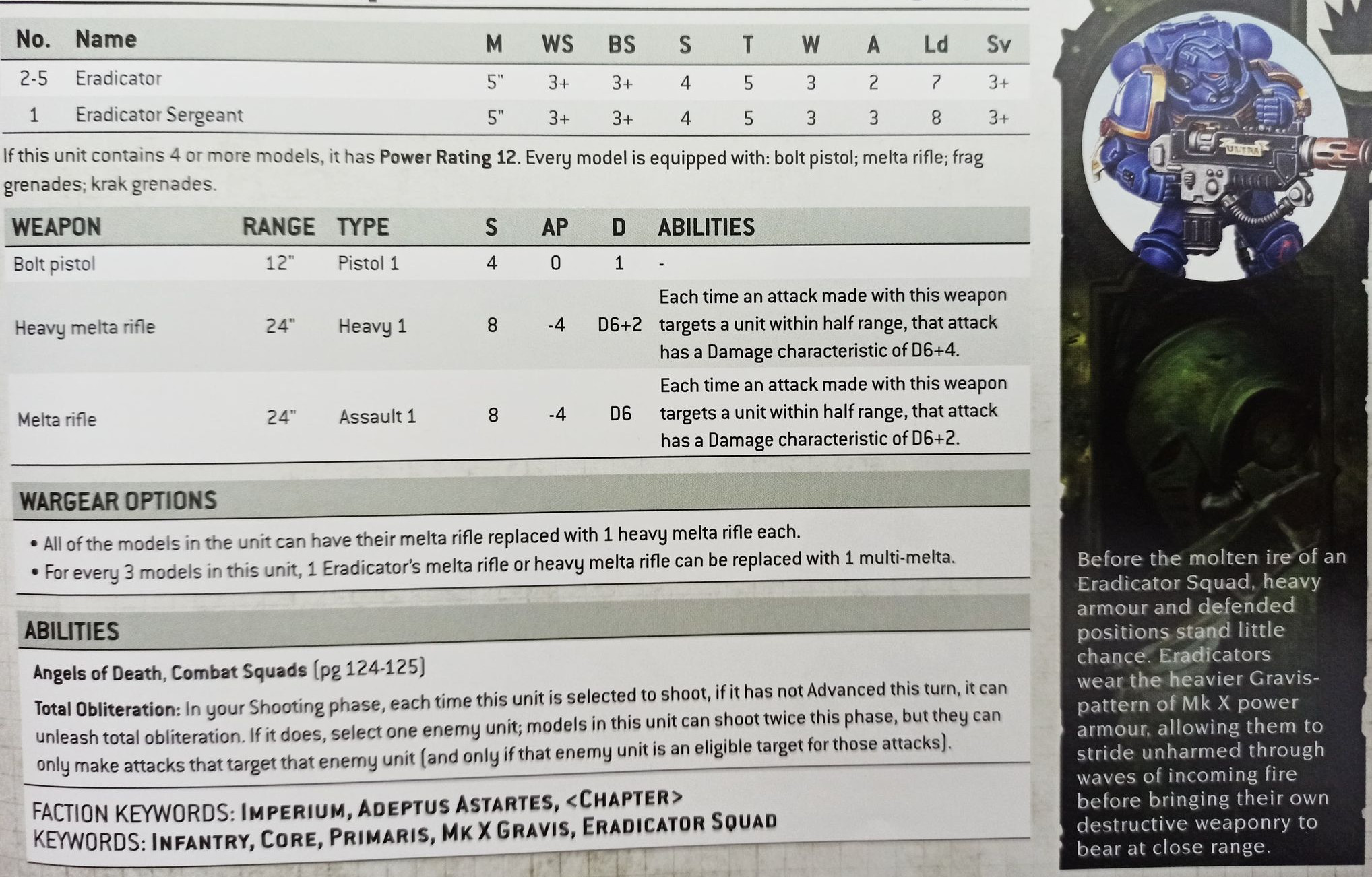 These are maybe the only OP unit left in the book. Because yes the Space Marines codex is a nerf fest (a deserved one I would say),
still at 40pt per model, 45pt if you want the Heavy Melta Rifle they are a steal! Slight nerf as the Total Obliteration only apply if you didn't advanced and still only if you shoot the same target!

Also now you can play them in a group of 6 with 2 multiMelta! I like them in groups of 3 with 2 Heavy melta and 1 multi melta. Or with 3 assault melta.

Also, they are core and benefit from all aura.

2 stratagems really help them a lot :

-Steady advance if you equip them with Heavy weapons. 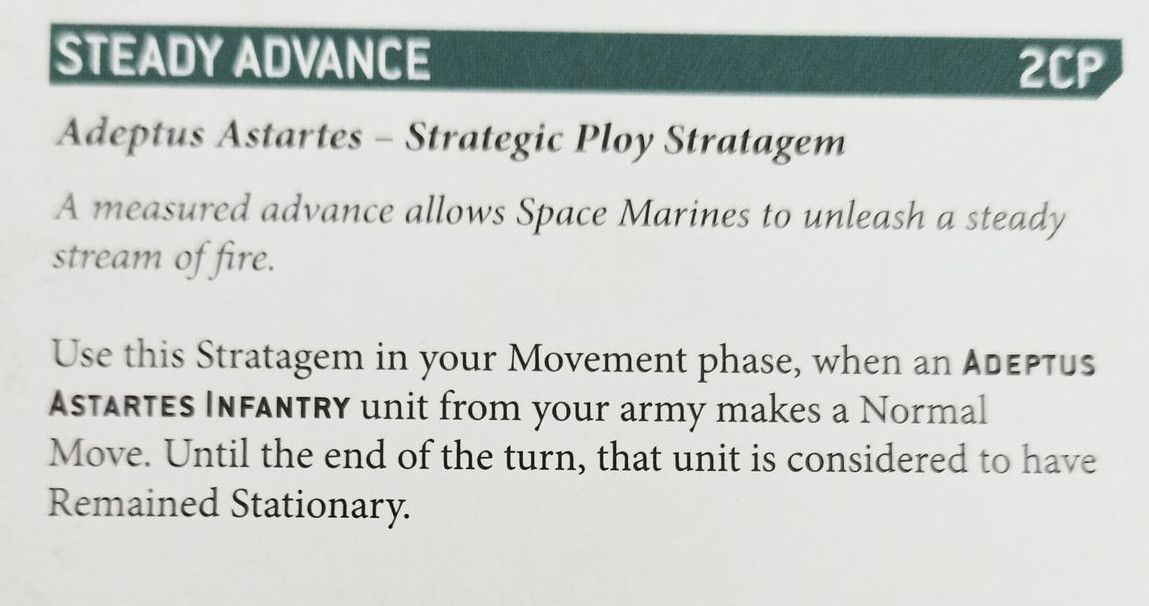 -Unyielding in the face of the foe: to protect them from ranged saturation! 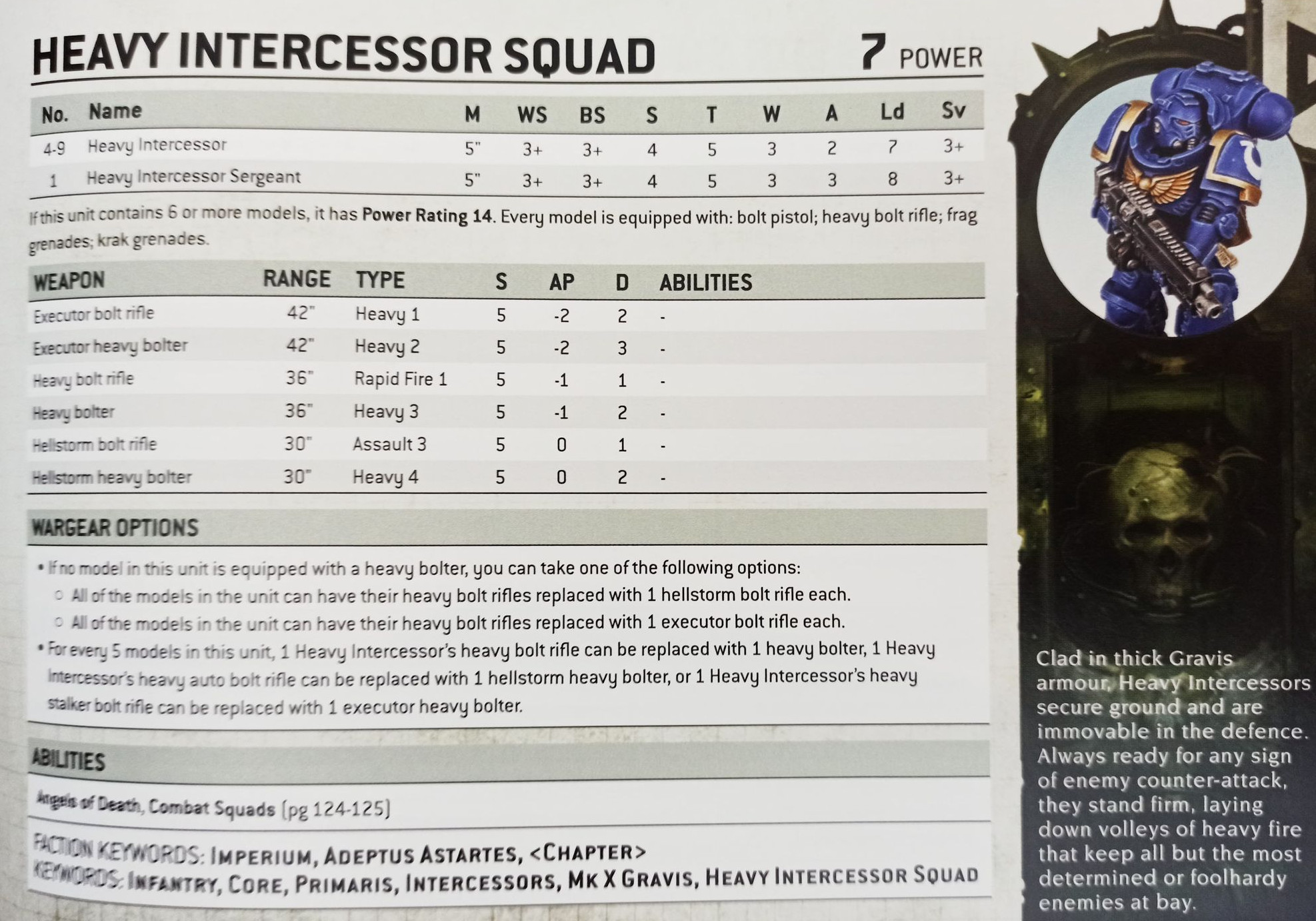 TROOPS, T5 with wound 3, Gravis and Primaris keyword 28 pts each and you choose the bolter you want. Off course the Executor Heavy Bolter is very sexy, especially turn 1 with the devastator doctrine active for 10 shots S5 Ap-3 Dmg 2 at 42" ^^
And they are Objective secured...this is crazy...

In a cover with Unyielding in the face of the foe stratagem and Transhuman Physiologie. Heavy Intercessor can hold objectives under heavy fire while dishing a lot of pain at range!

3) Primaris Chaplain on a bike : 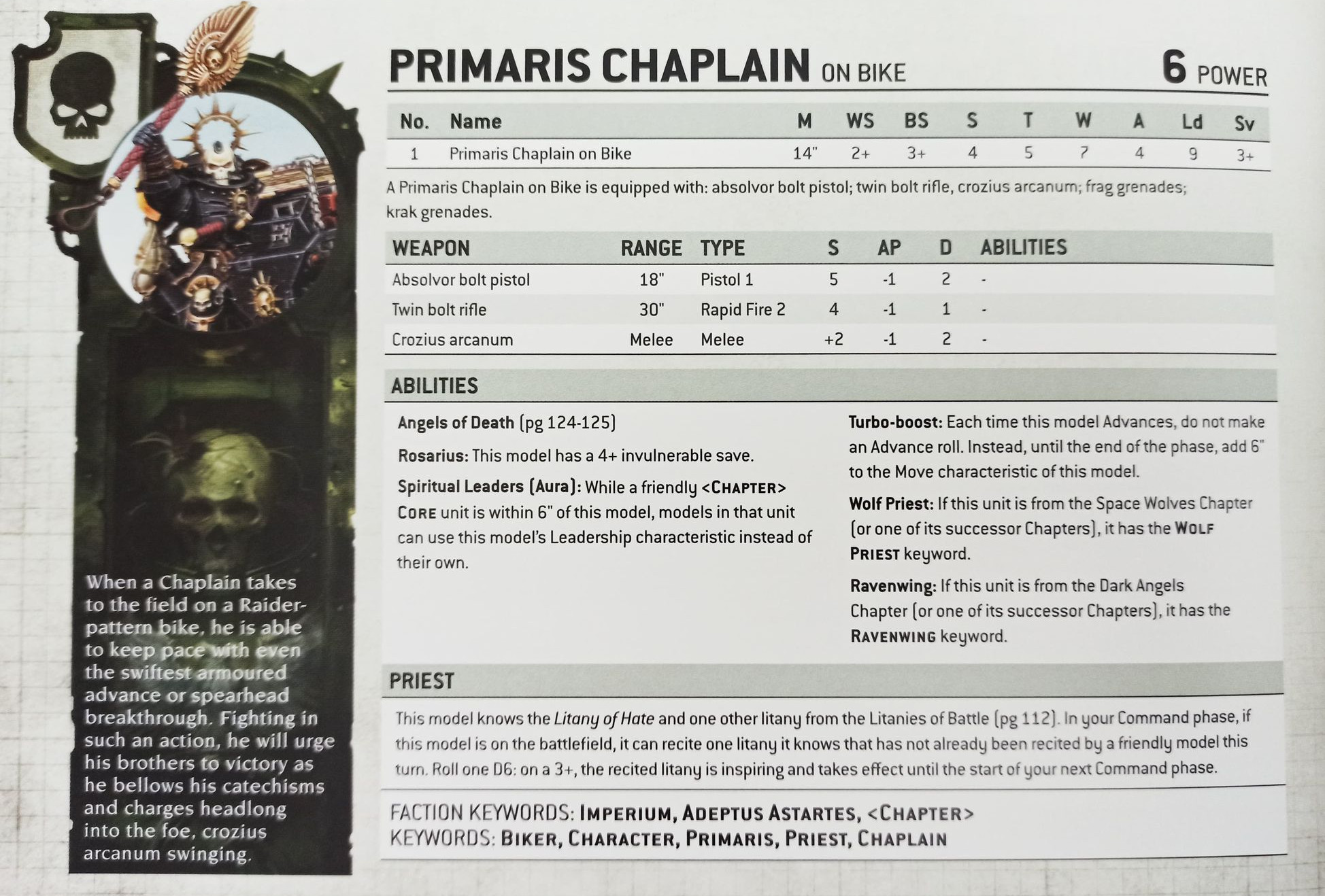 At 115 he's a very very good support option especially if you take the Master of Sanctity upgrade. 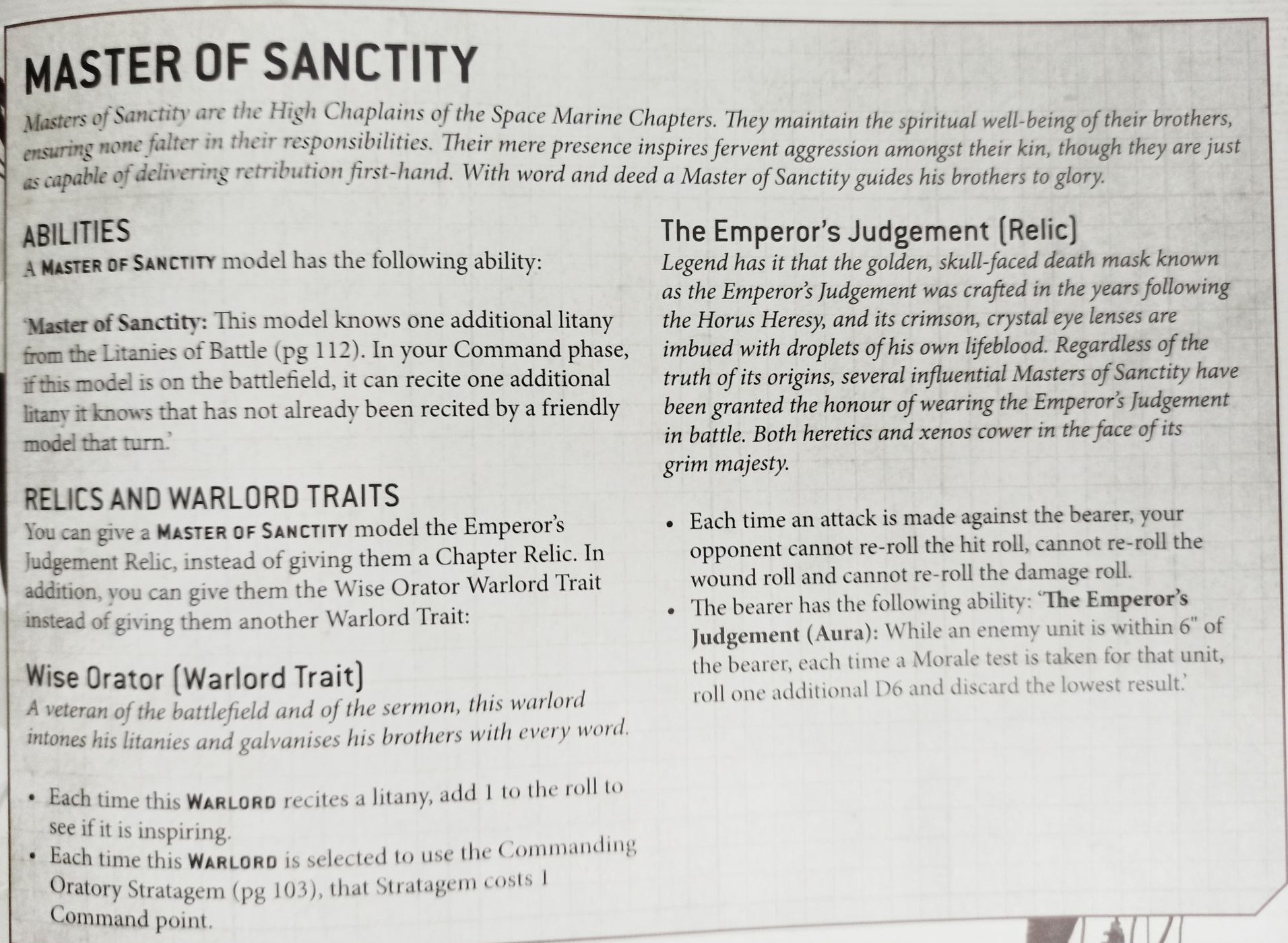 This Litany had +2 to charge range in a 6" bubble around the Chappy. with the bike, you can easily auto-cast the litany with the Commanding Oratory stratagem. 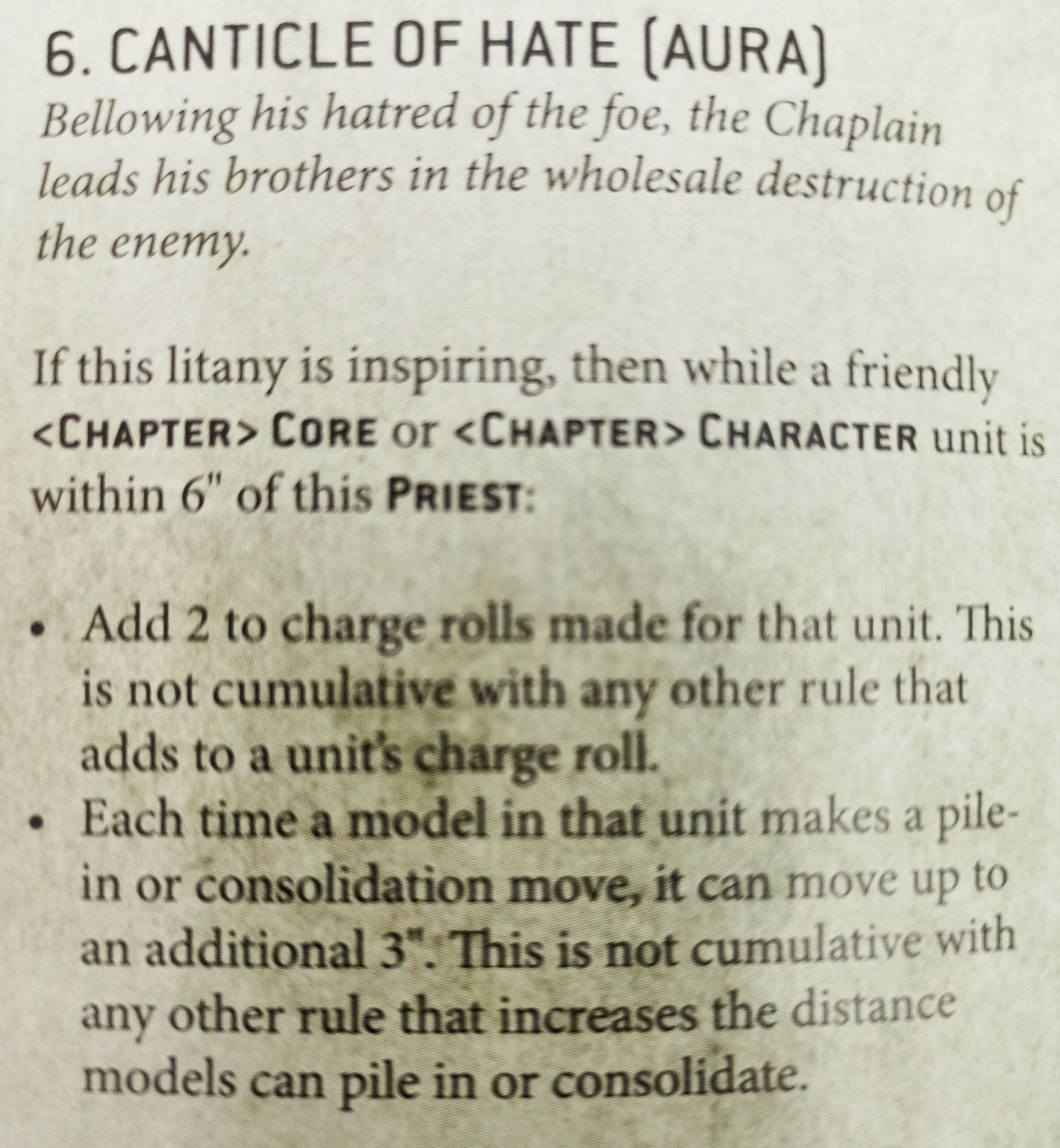 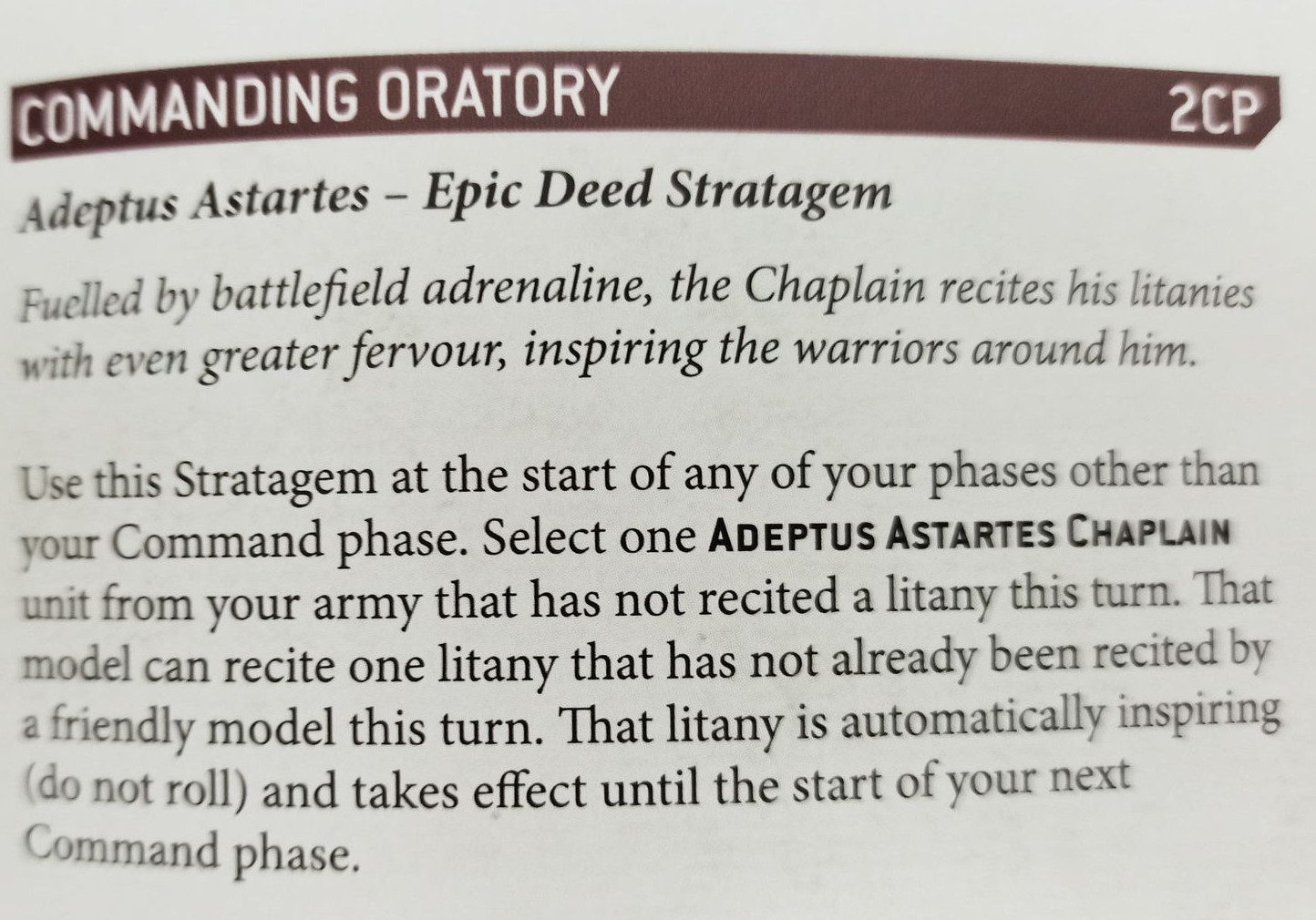 Turbo boosts somewhere to grant the +2 charge range aura bubble to multiple deep striking units.
Work very well with Assault terminator (Blood Angel even better), Vanguard, Drop pod. Charging on 7+ is Super strong! A 7+ charge is 58.33% and 83% with reroll! yes, it's not automatic but it's very probable ^^
It's even better if the target you want to charge is in a building on the second level.

4) Chapter Master on a bike!

Chapter Master is now a Captain upgrade.
First, if you buy it, you can get a second captain! Also, you get access to a relic: Angel Sacrifice, grant a Save Characteristic 2+, +1w, +1tough!
Then equip your captain with a storm shield+Thunder hammer for 1+ save, T6, 7Wounds !. 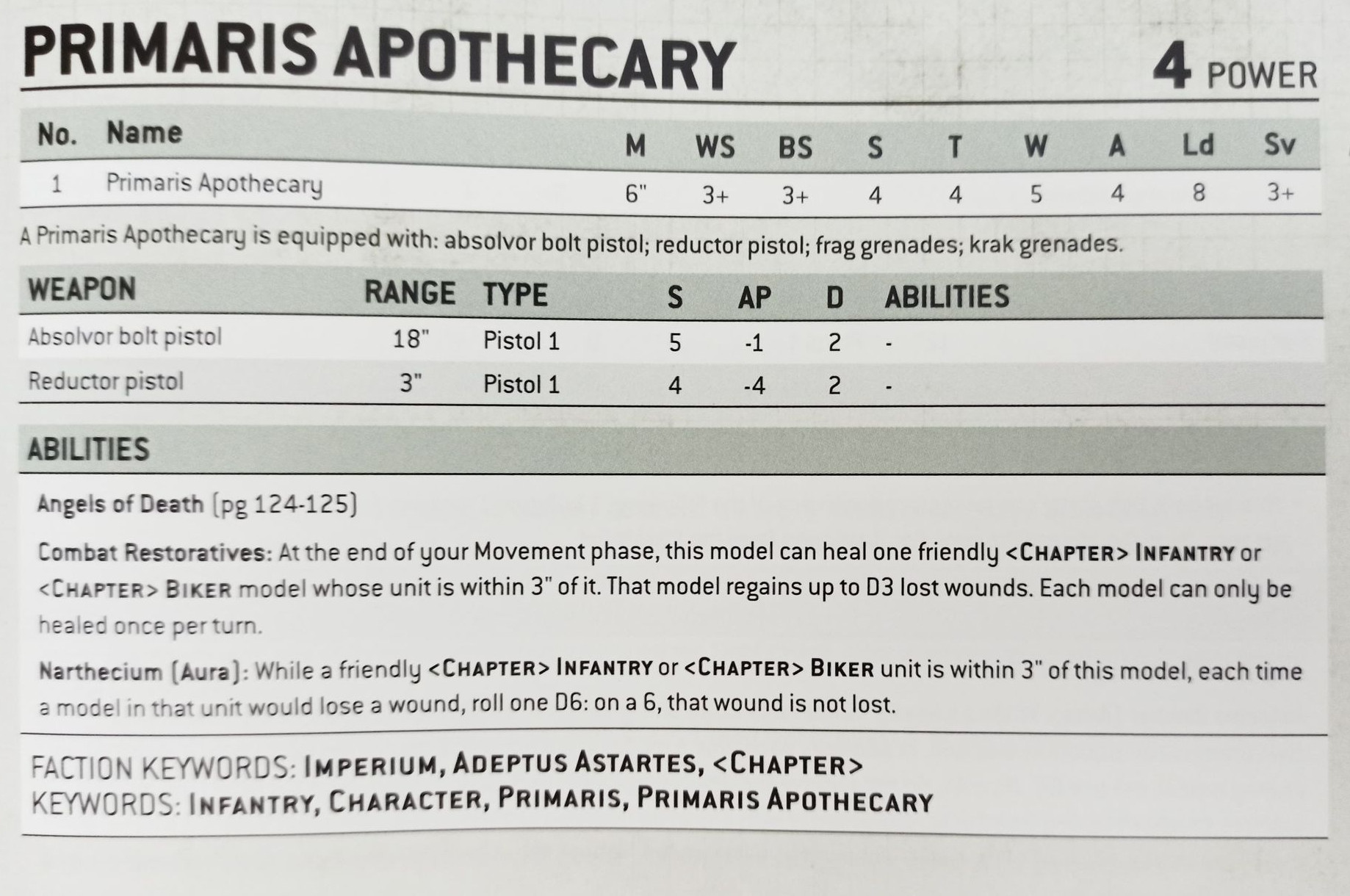 75 pts or 80 pts for the Primaris version, give a Feel no Pain 6+ and heal multi wounds models each turn for 1d3.

They also have access to an incredible Stratagem, Combat revival : 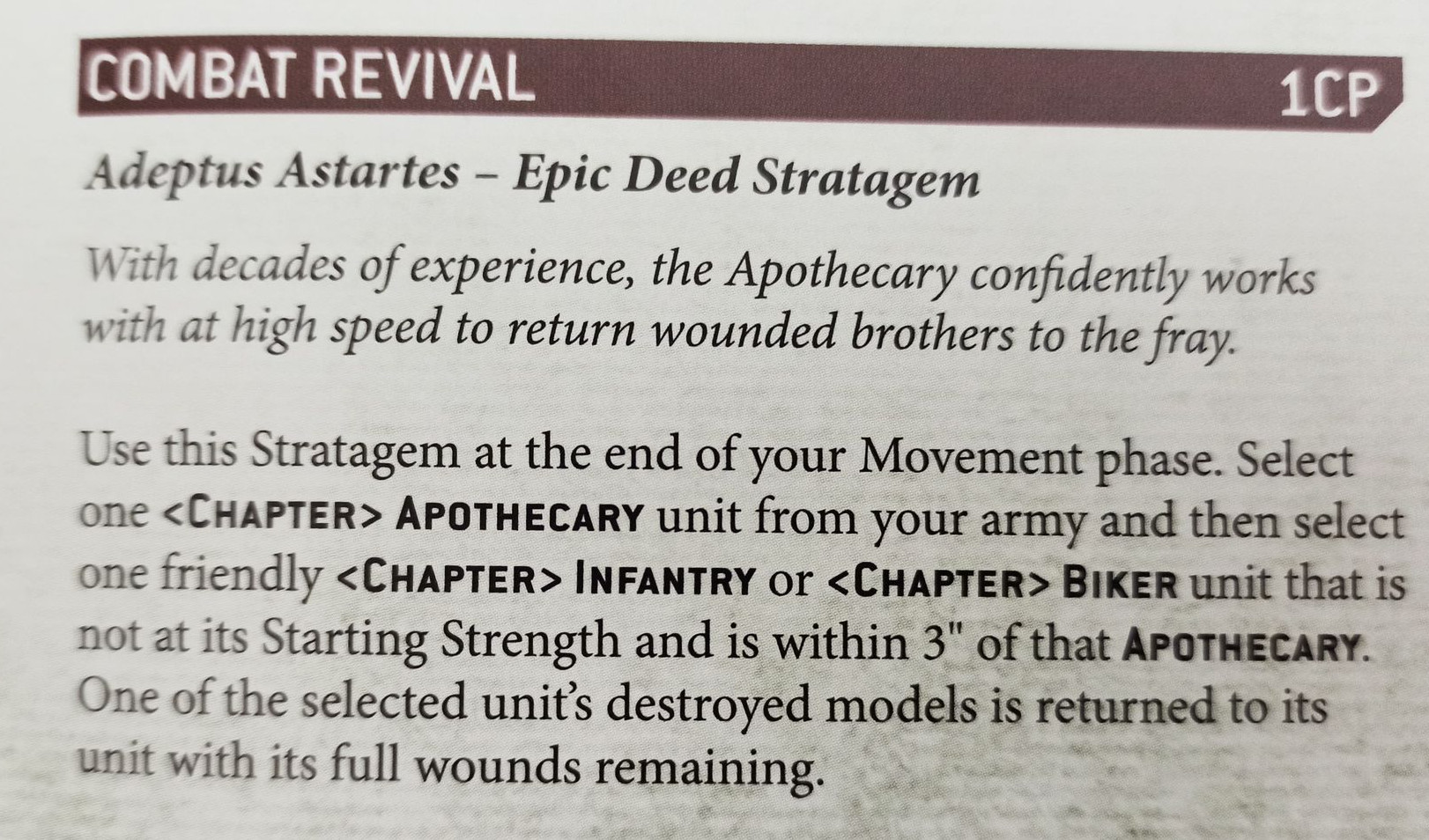 Godly !!! For 1 cp and while the range is only 3 you can use it at the end of the movement phase. So you get to move both units before doing the heal. Works on bikers and give them full life!
If you play Gravis units or bikes this is good spending of 1 cp!

Also if you upgrade the Apothecary to Chief, he can heal twice and if you spend 1 cp to give him a warlord trait you get this.

Using combat revival for free is great !!! you get your invested CP back first use and gain benefit for each extra use! 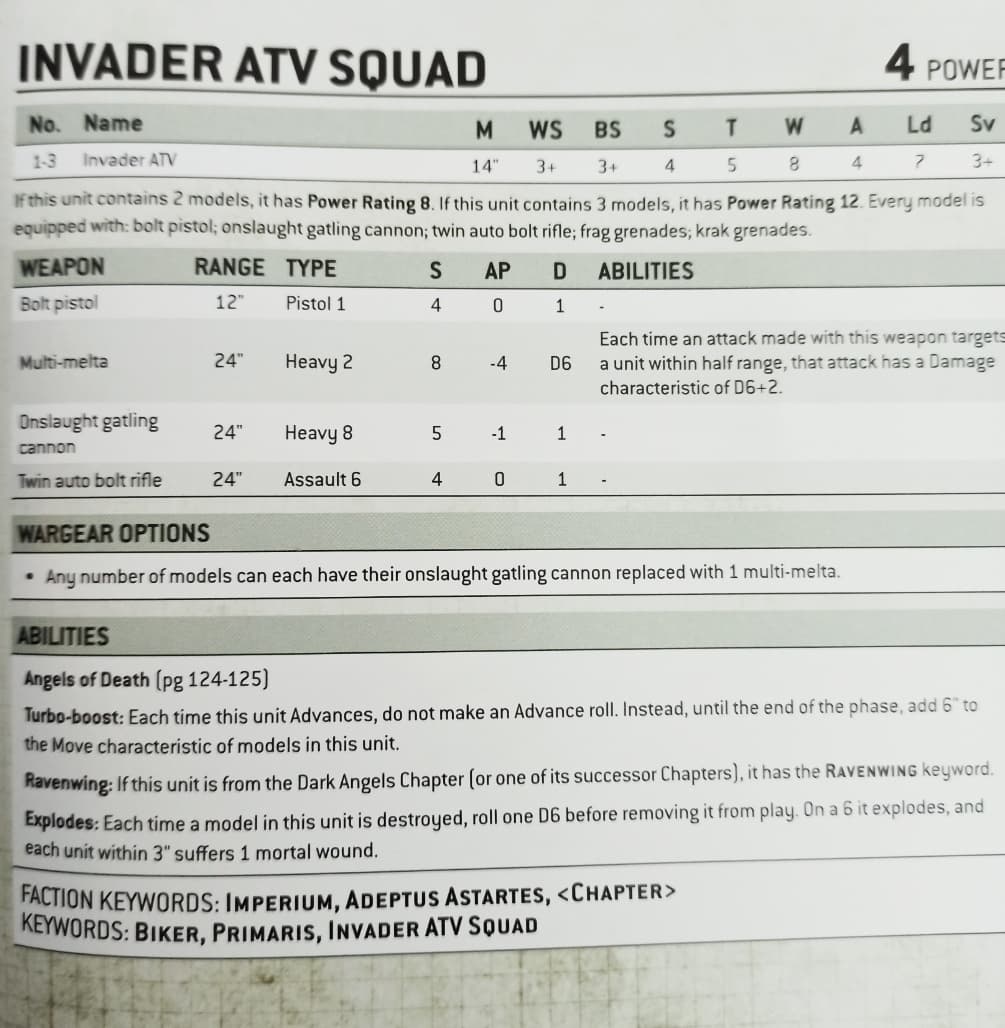 Invader Atv Squad 1-3 models, 80pts for the Dakka version and 85pts for the Melta version!
For 240 or 255 points you get an incredible amount of firepower and mobility. 14 shots each that's 42 shots total or 6 Multi Melta Shots !!
The Invader is a sturdy chassis as well with T5 and W8! Also, they are Bikes, you can use the -1 to hit stratagem to make them tougher. Lastly, if you are targeted by anti-tank weapons you can use Transhuman Physiologie (1cp) to ignore the wound roll of 1-3. They are going to be a pain to take out. 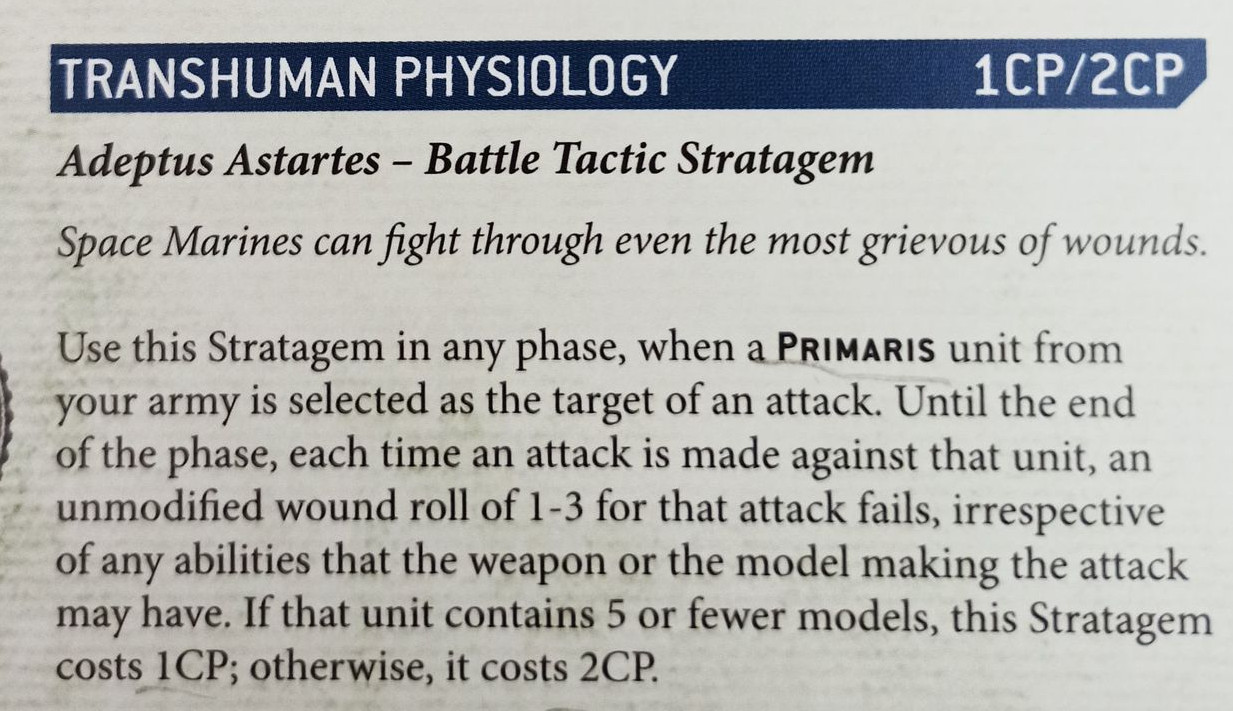 But that's not all!

The super mega combo that ranks them 1 in my mind is :
Remember the Apothecary combo from before? that works on ATV as well as they are BIKES. The apothecary can resurrect ATV to a full life!

Imagine After a turn of beating you lost 14 wounds on the ATV (so only 2 lefts and one with 2hp). They meet the apothecary, and "voila" back to full force before the shooting phase !! 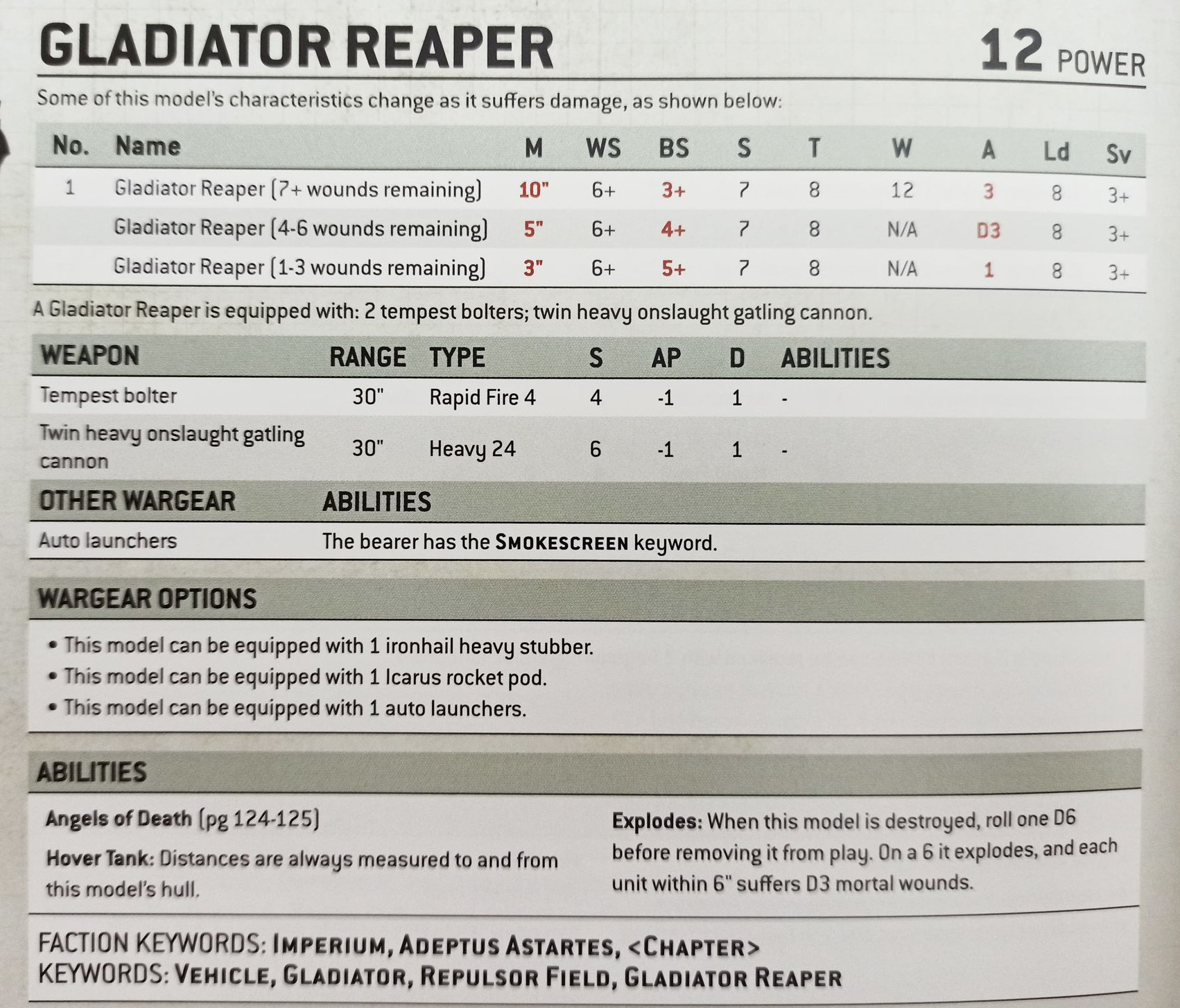 At 230 points it's a big investment, but he gets a disgusting amount of Dakka!
The main gun is heavy 24 and with 2 extra rapid-fire 4 bolters. Also, you can add 1 Ironhail and 1 Icarus. If you can rapid-fire it's 45+ shots! 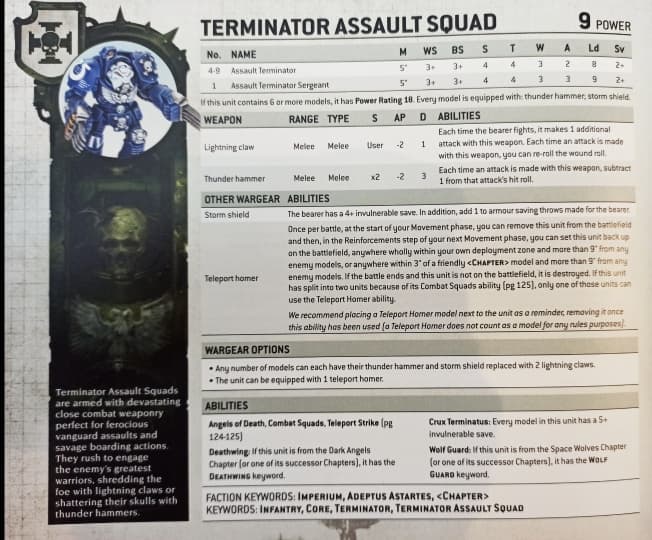 With the Teleport Homer new rule, the third wounds and the stratagem fury of the first they are really a solid choice.
Also, they all have Teleport Strike that combines very very well with the Chaplain charge aura. 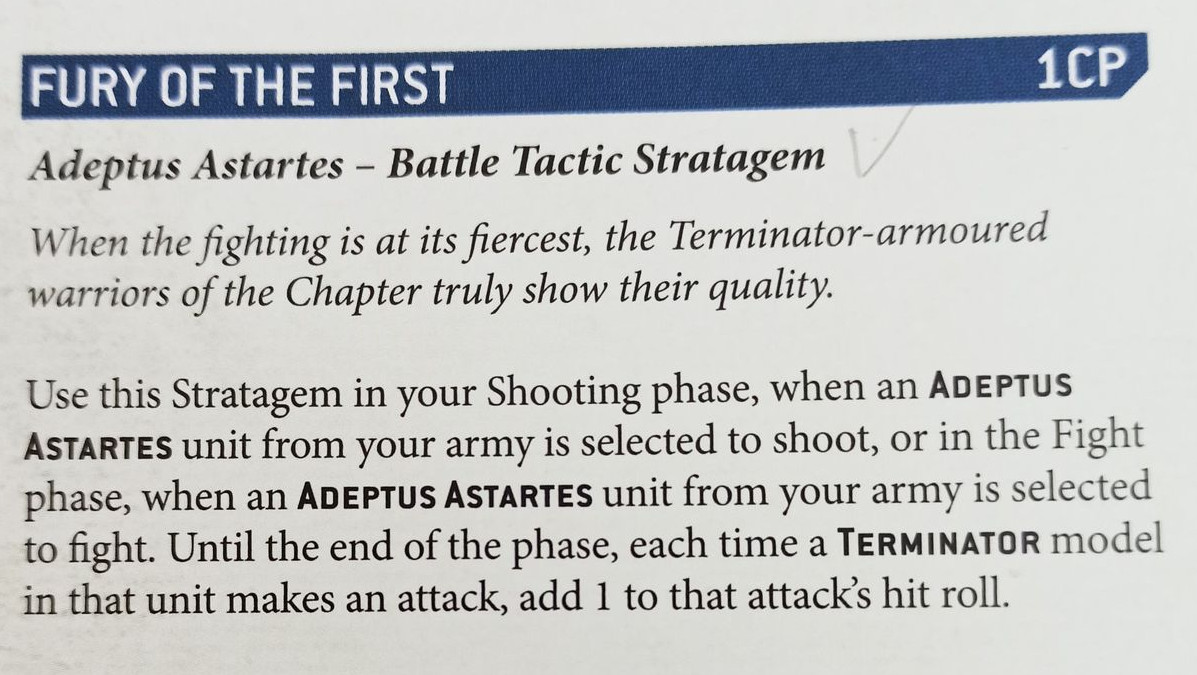 On the weapon side, the Power fist is flat damage 2 and the Lightning Claw is +1 attack per claw and rerolls wounds.
Maybe it's more of a Blood Angels strategy, but a blood angel Assault Terminator squad with Lightning Claw that charge on 7+ with 2dices thanks to the chaplain aura and make 5 attacks each 2+ thanks to Fury of the first and 3+ thanks to Blood angel trait, reroll wounds.
All this for a relative Cheap investment.
Also, I focused on the Assault Terminator but you can do the same with Tactical Terminator as 16 PF attack on 3+ are probably enough and you get to shoot!

After 25 years of 40k Terminator are, at last, a good option! 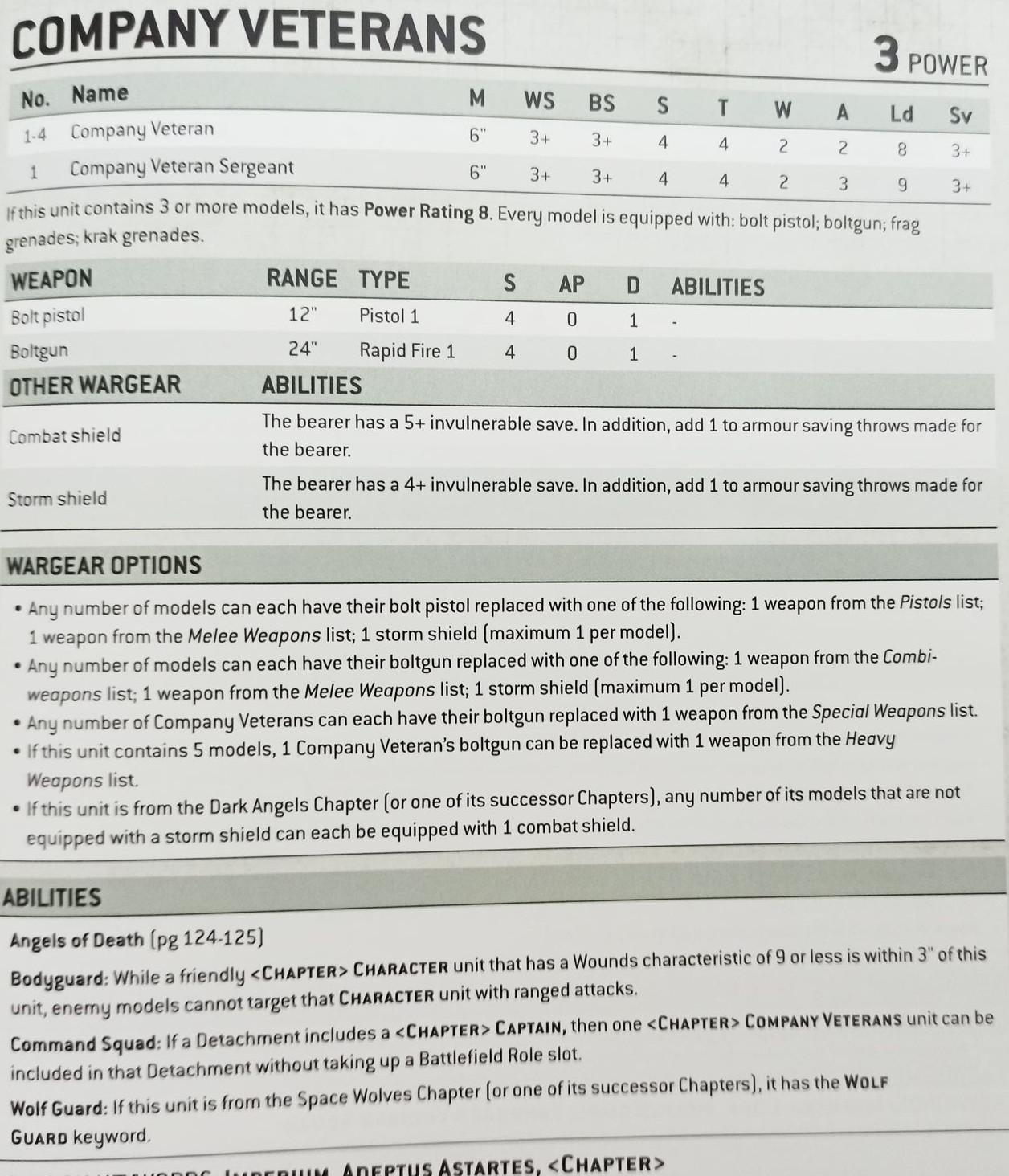 Old Honour guard, they are now at 20pts with 2 wounds. they have access to nearly all weapons, but more importantly, they don't take Elite slot and they have the Bodyguard rule. If you plan to use support characters you better take one of those!

What? yes, you read it, Devastators are good now. they are at 18 points with 2 wounds, both Multi Melta and heavy bolter got buffed. you can buy extra bodies to protect the weapons. Cherub and Signum synergies very well and you have access to the "count as stationary" stratagem. They are a good choice now! They are a pain to kill if you are in cover. Units of 8 with 4 heavy bolters are only 184 points.

That's it for my TOP 10, what do you think of it? Agree? disagree? One thing is sure better to be ready to fight a bunch of Heavy Intercessor Units ^^

1) Salamanders!
Using melta, ignoring AP1, benefiting from the melta and flamer rules.
They get a few OP stratagem in the expansion codex: rise from the ashes, relentless determination, stand your ground, Crucible of battle...

Honestly, after reading them I wonder if they should be kept in the game...(the stratagem from the Salamanders codex.)

2) Imperial Fist :
Ignore cover, Bolt weapon double hit on 6, if you plan to spam Heavy Intercessor it could be the way to go.