Hello everyone, welcome to the Broken Realm Teclis review This post will regroup all the info and the news on this release 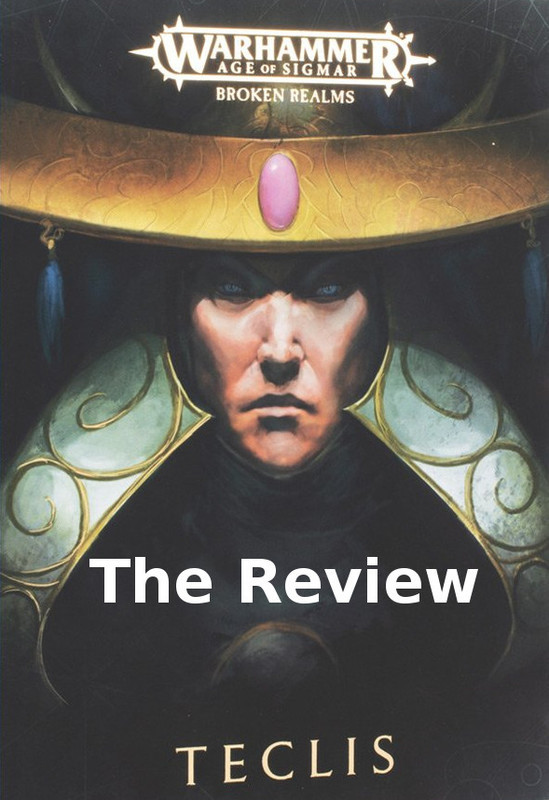 Broken Realms teclis is the second instalment of this narrative series of book for AOS. The stories in the first book revolved around Morathi and her quest for godhood. This one, named Teclis is the record of the war The lumineth Realmlords lead by Teclis and the Force of Death under the rule of Nagash!

The book is hardcover and 150 pages. Usual GW quality so nothing wrong on this side ^^

The book is divided into 3 part as will be the review: The fluff, the Narrative rules and the Matched play rules.

The main interest in broken realms is the fluff. BR Morathi was awesome and I bunch of stuff on the DOK queen.
This time it's the war that Teclis initiate against Nagash. It's not a skirmish heh, it's a full-blown war where the Lumineth invades Shysh...

The battles are kind of cool and interesting even if it's sometimes hard to understand the power level of Teclis, Nagash, Allarielle...

What I prefer in BR Teclis is the interaction between all those gods. Teclis and Allariel arguing, Teclis taunting Nagash, Eltharion Taking revenge on Arkhan. It's interesting to see how Teclis refer to Tyrion as your old lover when talking to Allarielle. 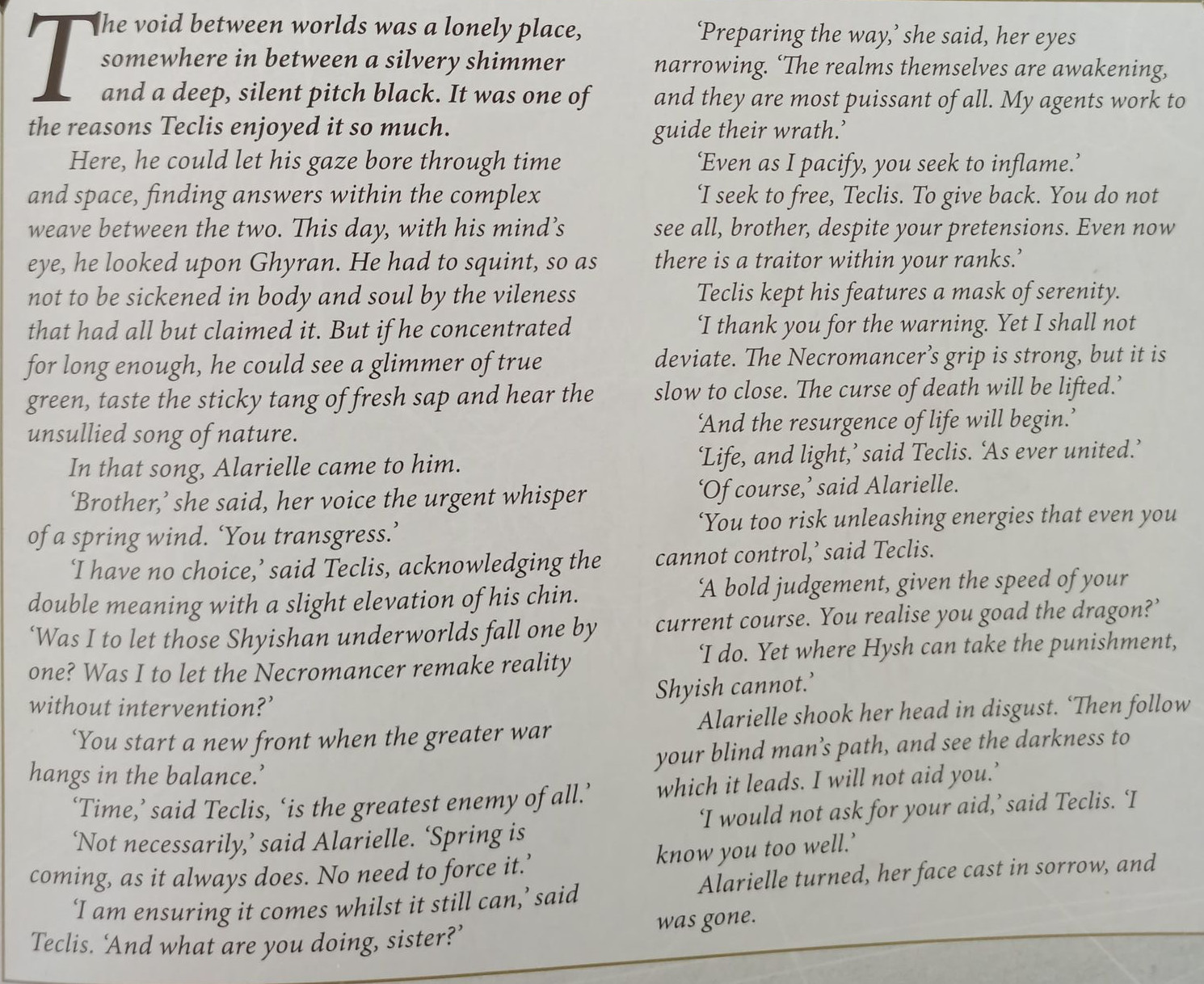 Spoiler: Tyrion is not here and apparently on a quest. he's fighting an enemy far stronger than Nagash (said Teclis) Who would that be? Malerion? Be Lakor next BR book is on him btw so maybe it's that ...

The second things that I like are the stories created to link the Land and the Characters of the different Battletomes. There are chapters about Nerfertata invading Chamon and How the twins and some Charadron defend the place. that was very cool to read! The interaction between Flesh Eaters and Ossiarch was hilarious too. Slowly but surely the world is taking shape!

The third strong point of the book is all the backstories from the old world that have repercussion in the new world.
My Favorite was when Eltharion goes on a suicide run to prevent Arkhan the Black to finish a ritual as a reenactment of the Everchild fight!
(Everchild was the daughter of Tyrion and Allarielle and was sacrificed to resurrect Nagash...)

If I were to dislike an aspect of the book that would be :

Nagash and the Mortarch Ritual!
It's business as usual, Nagash wants to do dark magic stuff to gain powers or get moar bones or whatever ^
Still corrupting the Avalenor mountain it's kind of cool.

70 Pages of fluff ending with Nagash and Teclis duelling. It's a very good book if you are interested in the AOS settings!

After the fluff part, there is a Narrative/open chapter of the book to help reenact the battles of the book!

Broken Realm Teclis propose to play a campaign, It's for 2 players, one playing Teclis and the other Nagash.

The armies you must have to fully enjoy the campaign are : 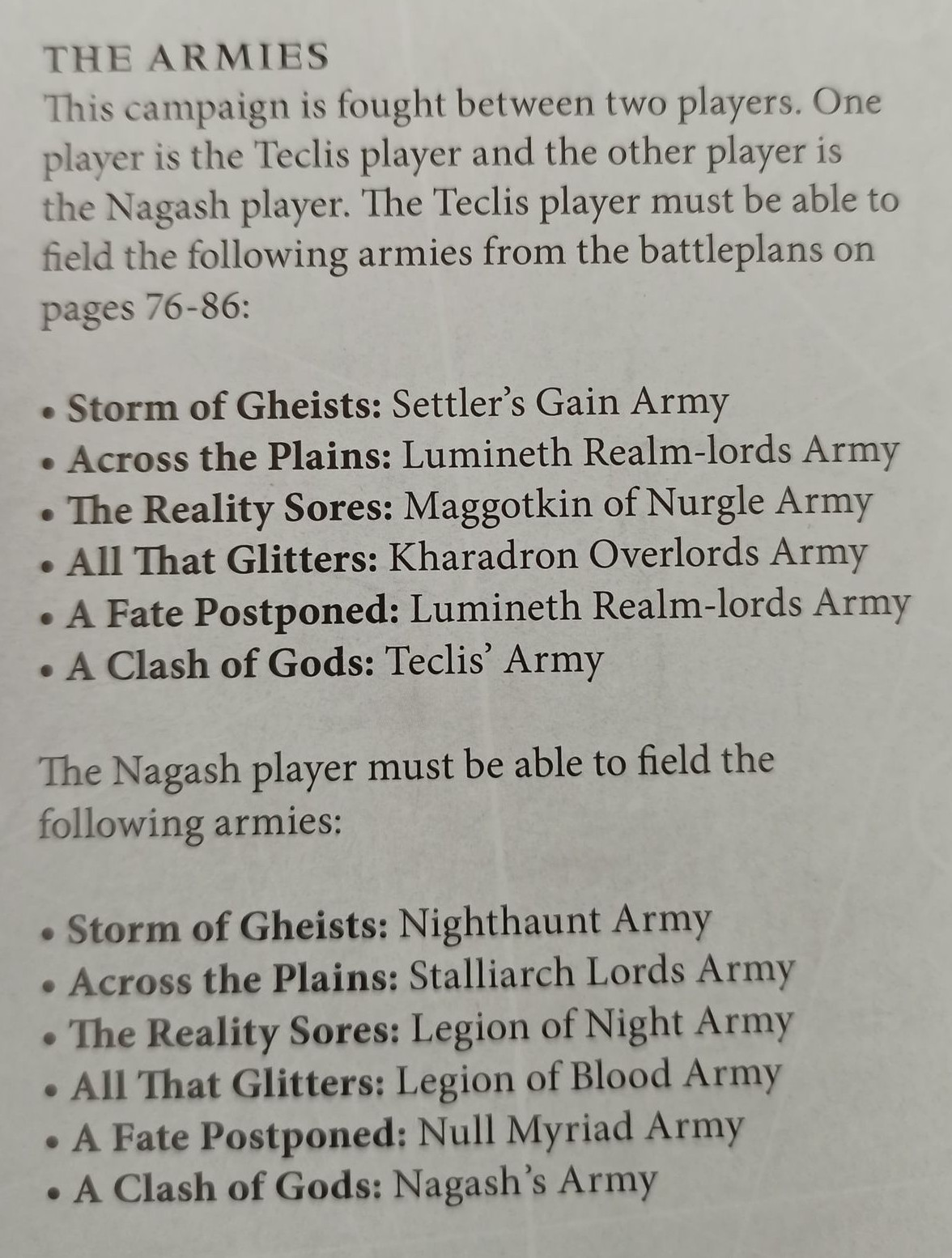 There are 6 battles to play in a certain order. Each win helps you achieve a greater victory.
I find interesting the way to make your army change for each mission.
ex: a Storm of Gheists, the first battle (A storm of night haunt ghost threaten to overrun settler gains city !) 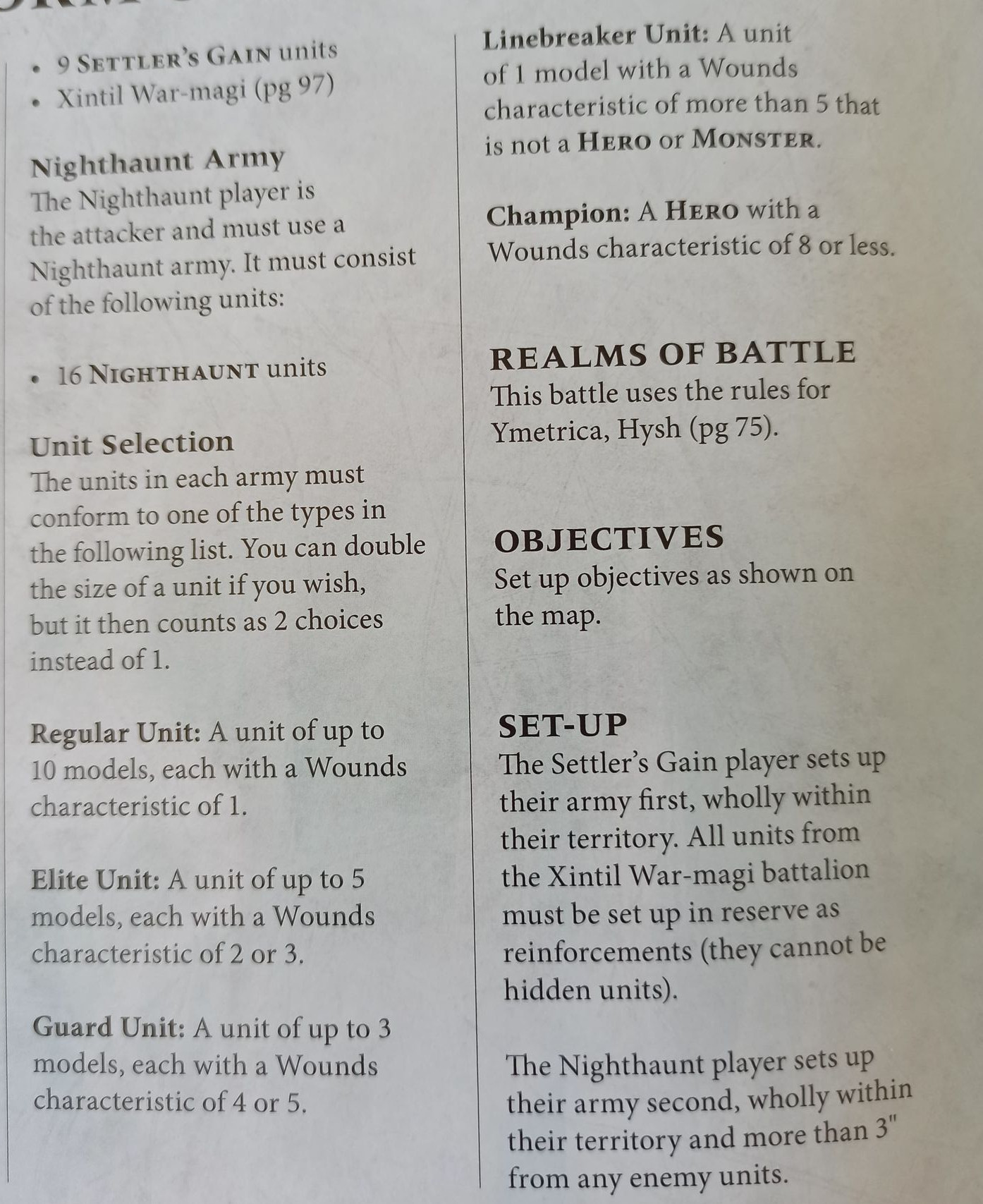 Also included in the narrative section :

-Street of Death: Cute rules representing fighting inside a city.
It's a good idea! 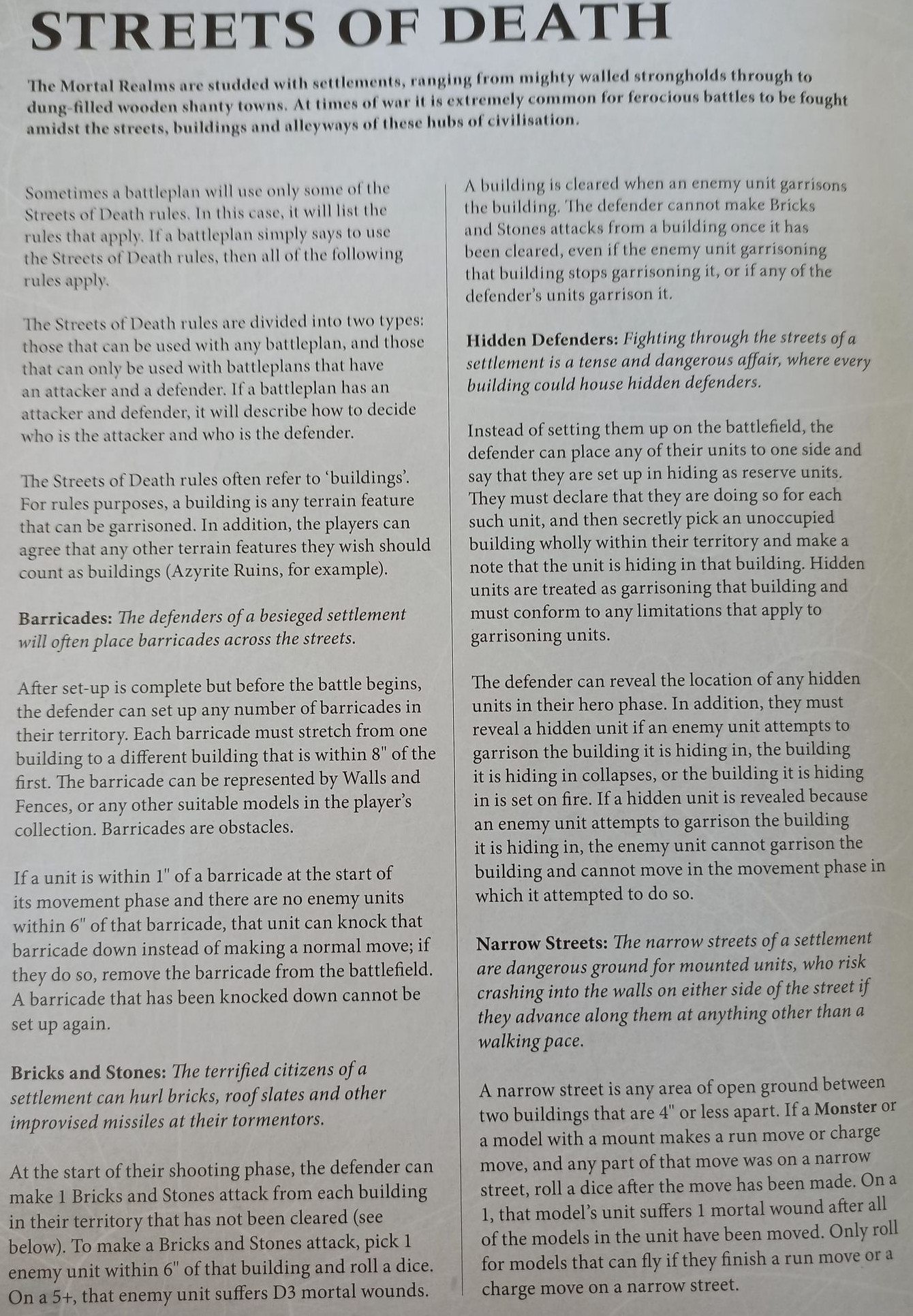 -Realms of Battle: Shyish, Ghyran, Hysh. All three are new and bring thematic abilities to the table. 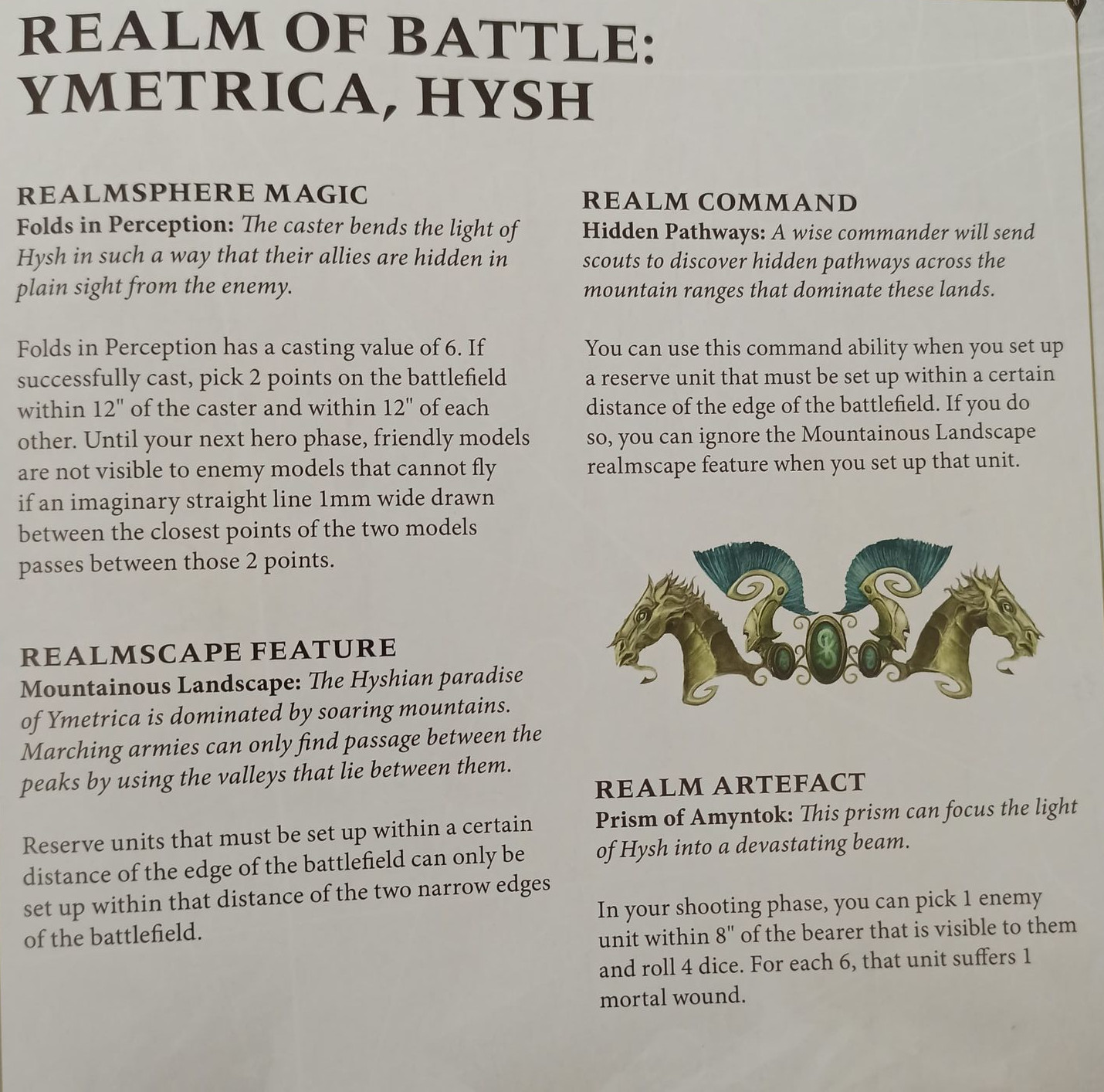 -Spoilpox Scrivener (140): Gain a buffing ability to plague bearer, +1 to attacks, rend or save. It's a very strong ability and stack nicely with Bilepiper.
-Sloppity Bilepiper (150): Gain 3 songs, +1 attack, Mw on a 6, prevent pile-in

Nurgle needed the buff so it's good news!

Beast of Nurgle (120): Holy shit what change +3 attacks, +1 rend + 1 damage. Do you know what I find crazy? is that Beast were bad enough to justify a buff like this.

They also get a new formation costing 120pts for 10 plague bearer coming back once per game.

-Settler's Gain: Want to mix human, Stormcast and lumineth? you can do it in this city. You also get a +1 to casting roll... There is a warlord trait giving one CP on 4+ each turn!
It's a nice combo, I am sure you can make something interesting!

-Lumineth: All the new Lumineth models have fluff and rules in Broken Realms to complete the already released battletome...Still, it's a pain to have everything in 2 books and with some rules changing and others not. Every player I know is getting the new Battletome anyway. It's a shame to pay for this when you don't care or plan to buy the battletome.

That's it for this quick review!
Broken Realm Teclis is a very good book with an interesting storyline. Still the space spent on the Lumineth battletome patch could have been used for something else...

Speculation: After reading this book and thinking about what Allarielle is saying to Teclis, I think Kragnos is going to be the Allarielle Weapon against Nurgle...Maybe an Avatar of Kurnoth or even a Realm Awakened from Ghur. I don't necessarily think it's going in the Sylvaneth faction but I doubt it's a new faction entirely ...