This codex is a thin(80 pages) hardcover book. It's standard GW quality so there is nothing wrong about it.
The 3 main parts of the book are The fluff, the model's pics and the rules!

The first 40 pages of the book are dedicated to the Chapter presentation. It's quite complete with a lot of details on the different companies and units. There is also details on the how did Reboute fall and some other portions of his awakening (nothing really new).
Tragically the timeline stops at the start of Vigilus when Calgar is on his way. Was the codex delayed? maybe I don't know but no new stuff here.

Scion of Guilliman is a new rule that is added to your army if it has the Ultramarines keywords. 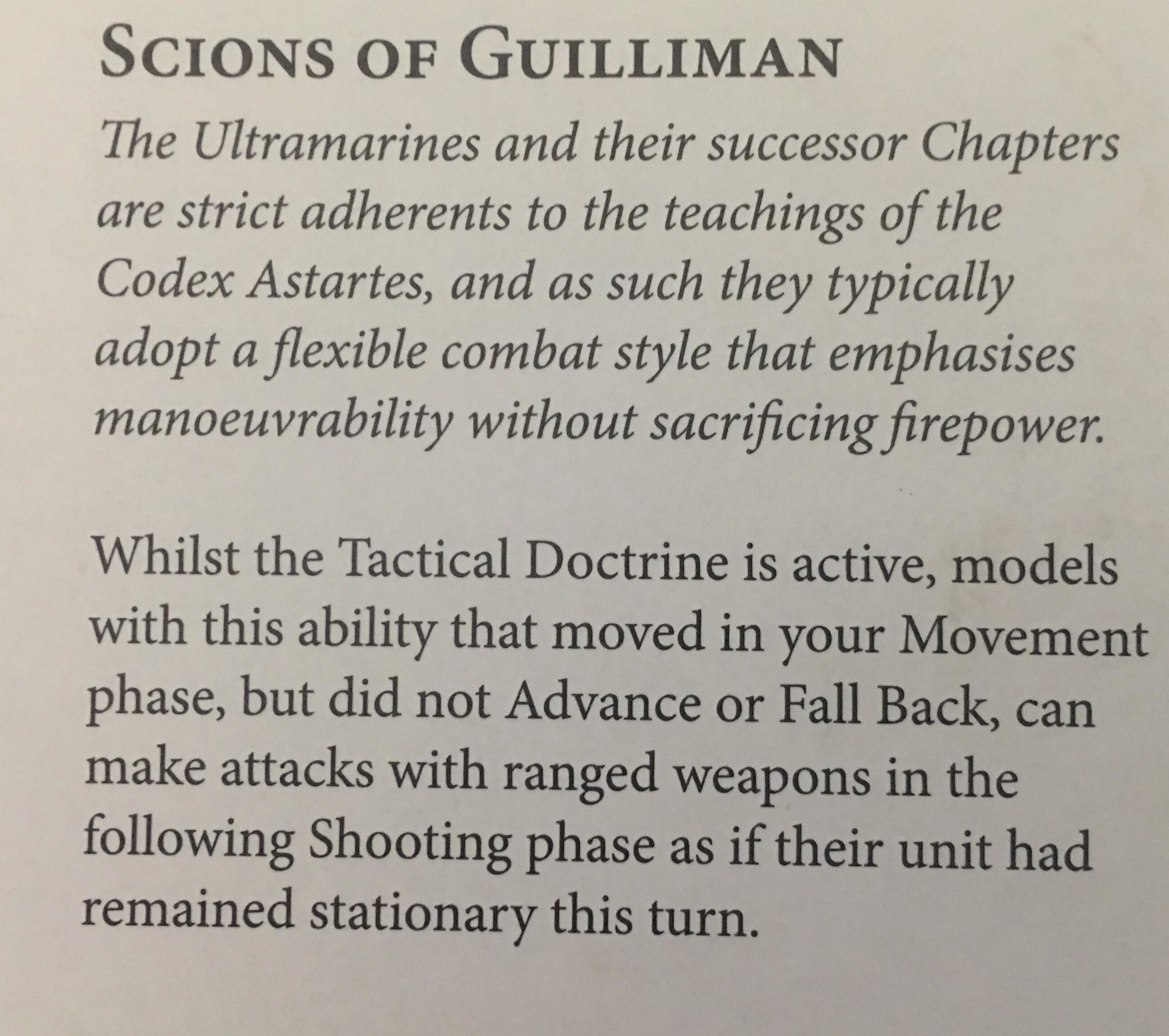 In a nutshell, this ability allow Heavy weapons to move and shoot without the -1 but also give Agressor the double shot, let you double-tap rapid-fire weapons at max range after moving...Yea it's super good.

Sure you have to cycle the Devastator Doctrine but the Rend -1 lost is gained back on the -1 to hit and allow you to move and shoot.

One of them feel incredible but has a big drawback. 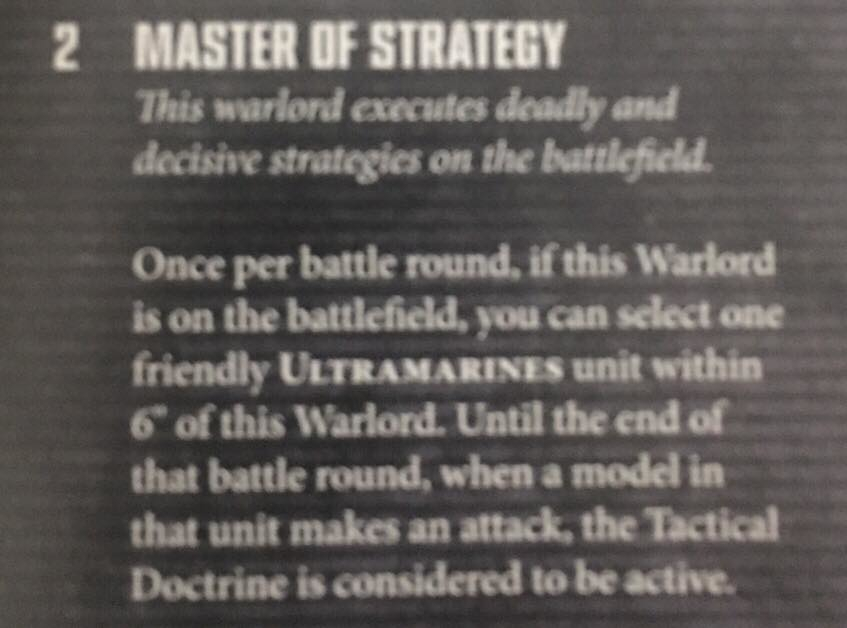 Wow !! That means, once per turn you can choose one unit that going to benefit from the Tactical doctrine even if the rest of the army is in Devastator Doctrine.

ie: You have one unit of 3 Landspeeders or 10 Heavy Blaster Incinerator, you warlord is going to use his trait to make them affected by the Tactical doctrine but the Devastator doctrine is still in effect.
Thx to Scion of Guilliman the unit can move (not run or fall back) and shoot without BS penalty and still get the -1 rend from the Devastator Doctrine.

The problem is : This Warlord trait is not available for Guilliman or Reboute only for generic Warlords Telion and Tigurius. Other traits are fine but nothing special.
-Cp point refunded on a 5+ (Calgar trait)
-Fallback and fire without -1 to hit. Doesn't work with Scions so meh !
-6 to hit deal 1 extra MW (Sicarius)
-Inf and Biker can perform Heroic Intervention within 6" (Guilliman trait)
-Heroic Intervention get range 6" (Cassius)

2 list here, one for Ultramarines: Relics of Macragge and one for Successor & ultramarines: Special Issue Wargear.

A few very strong option, the banner, the terminator armour are quite cool

Mantle : 5+ FNP
Artificer armour : 2+/5++
MCW : +1dmg to one weapon
Digital weapon: one extra attack dealing 1mw if hit
Reliquary: +1A within 6 once per battle (not restricted to ancient)
Seal of Oath: select one enemy at the start, reroll wound and hit against it while within 6" of the seal.
Hellfury bolts: one bolt weapon deal MW on hit
Sunwrath pistol: range 12, pistol 2, S8, Ap3, dmg2

Seal of Oath can be very good against army bringing one super strong lynchpin or Boss. Master crafted weapons is a cute addition to your smash captain hammer.

2 pages of them, most interesting are :

Cycle of war : 1cp reset the doctrine Cycle from assault to devastator again.
Exemplar of the Chapter : Give an extra trait to your unamed warlord. (1cp) , cute combo if you want to do the fall back and shoot each turn.
Squad doctrine : 1cp, select one inf or bike unit and apply one doctrine INSTEAD of the active one. Very versatile but have to use it during the move phase. It's super nice to give an assault unit extra AP
Fall back and re-engage: allow to charge after a fall back for 1 cp. Stack with all the other fall-back buff. 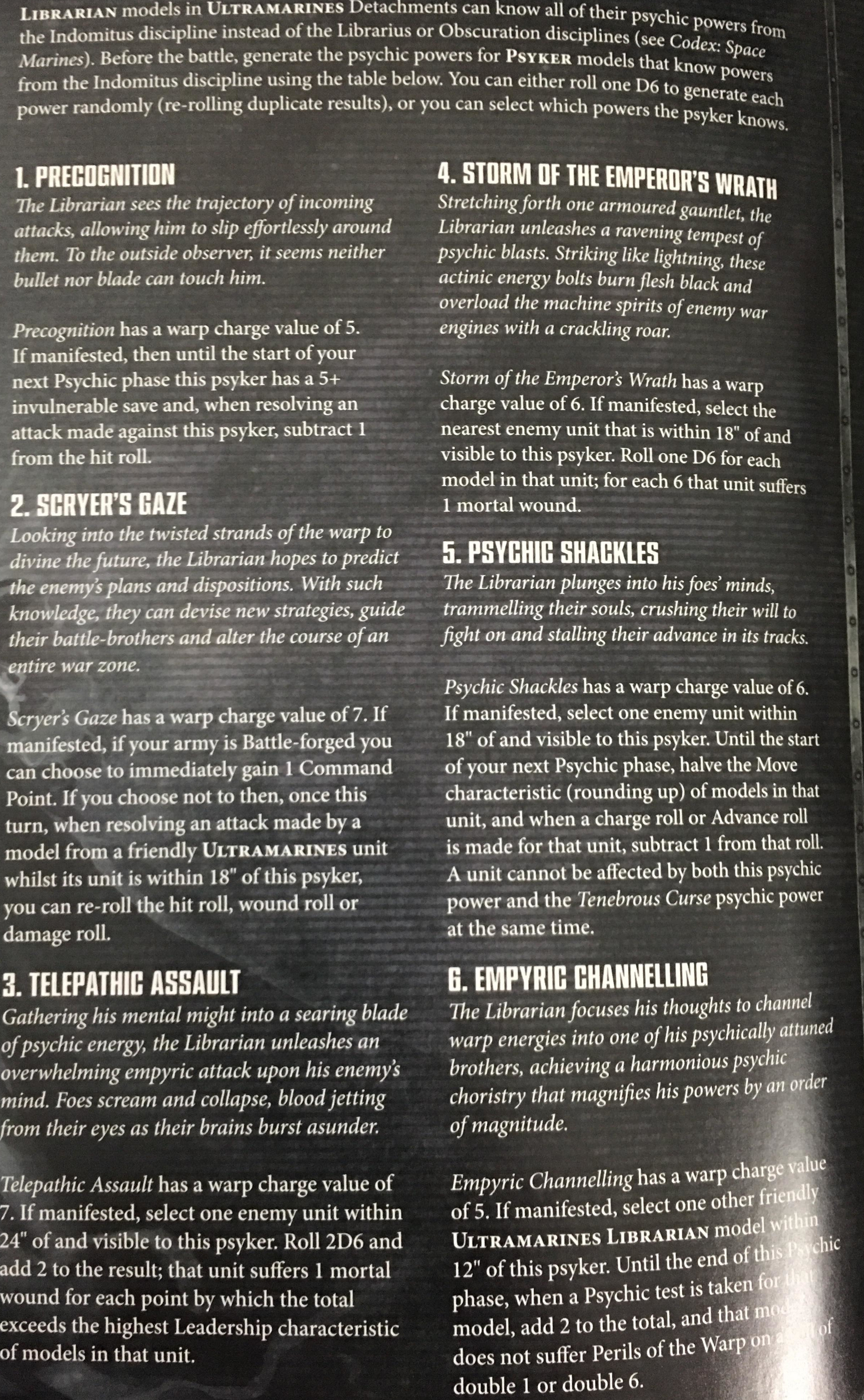 The gaze is a good CP machine and that's it.

That's it for the Ultramarines rules lets check the units now!

350 pts, improved reroll hit (not only miss) but nerf to wound aura to reroll 1 only. Give Heroic intervention to friendly if he's the warlord.
benefit from the extra attack on charge as well and can use the Doctrine Stratagem on himself to bring hand to Ap-4 (like the sword).
for 7 attacks on a charge 2+ 12strengh ap 4 dmg 4, reroll hit and 1 to wounds. Nasty !!!!!

No change but like Guilliman he benefits greatly from the extra attack on a charge.

No change, -5 points and benefit from the angel of death as well. Great Deal! 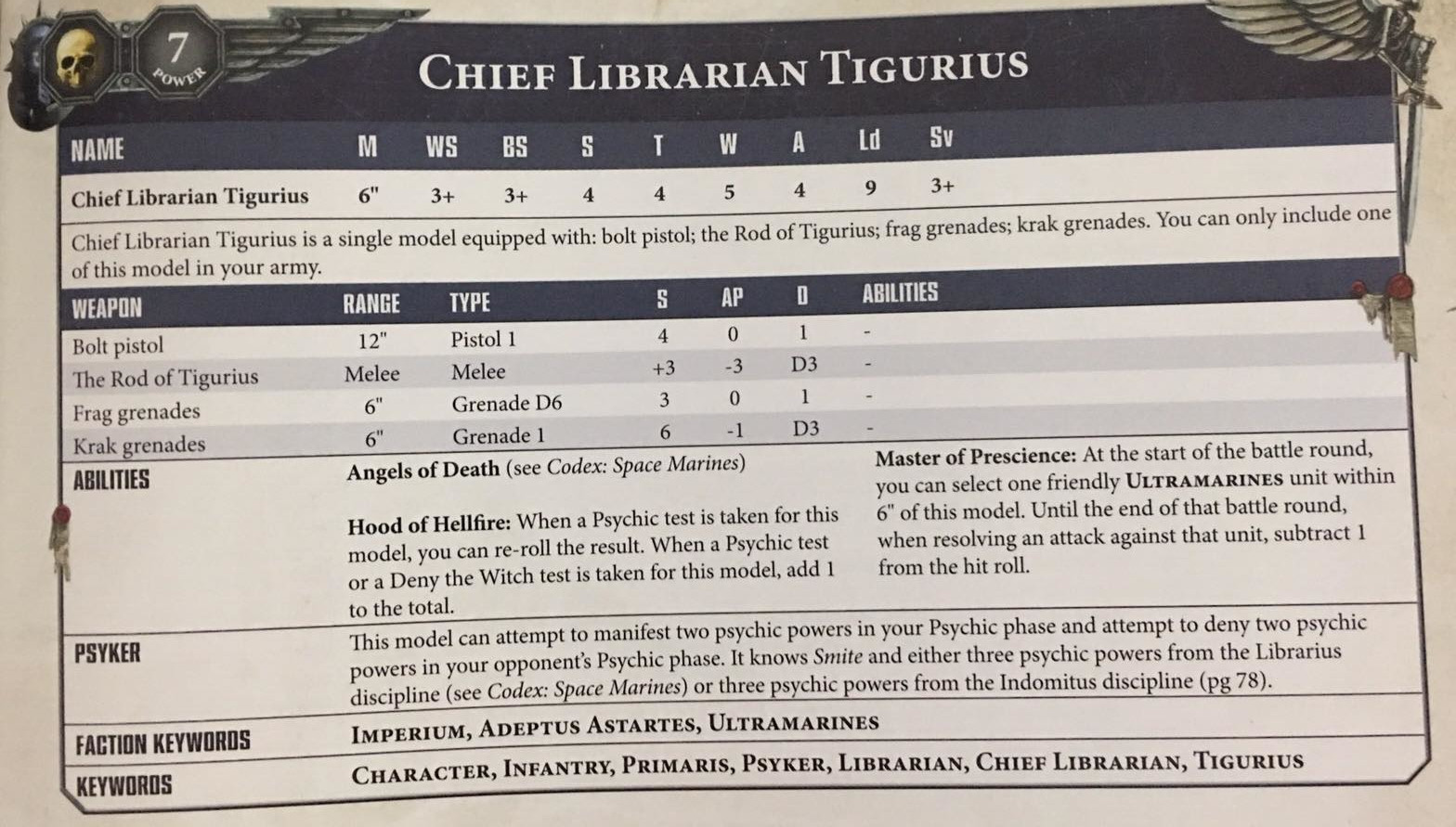 130 pt with equipment, grant a -1to hit to a friendly unit (awesome on Guilli or a big tank).
Spell selection is 3 from one list or the other, no mixing from what I can read :(
His hood grant +1 psychic so is a good candidate to Telepathic assault especially if the ancient is near. for a Manifest on 7+ with +1 and 2d6 + 13 - LD mortal wounds on the unit.

Bonus as a warlord he gets the awesome Trait granting Tactical Doctrine to one unit !!

For the price, he is good value but needs a bodyguard in case of sniping attack ^^

100 pts , ap3 sword, grant defender of humanity to one unit per turn.

65pts, ok-ish character sniper, buff scout (small marines only)
plz, come back when you are Vanguard ^^

Auto includes with a Land Raider or a Lascanon Predator.
The land raider combo is quite good 4 las canon shoot hitting on 2+ with AP4 on a super sturdy body and can benefit from chaplain buff. Super expensive but do the job and can transport stuff.

Company Champion with +1A, swap combat shield vs -1 to hit.

16pts, Sternguard with reroll hit and wounds vs Nids.
No extra stuff options :(
Very good in a team tournament if you can choose your target.

That's it for the Ultramarines !!
As usual ask question here !

Anyone else wants to paint some Ultramarines?

Howdy Guys and Girls - today I want to talk about some goodies you can take for your Ultramarines thanks to GSIII :)

Lots of wd image incoming.
Presentation of the Gulli and friend !!


So, a Primarch returns, the warriors of Titan join the battle and a lost son of Caliban returns to seek redemption (or possibly destroy everyone – the jury’s still out).

A few pictures of March‘s issue of White Dwarf have been circulating the internet today, but as with all leaks, they were taken during one of Nottingham’s many earthquakes, so the picture resolution is a bit blurry.

So we thought we’d just share the whole article with you!

Here you go folks, an exclusive from the pages of White Dwarf on the final instalment of the Gathering Storm trilogy, a whole month early. Don’t say we never give you anything.

Even better than plastic dwarf ! Guilliman in 40 K !!
+Cypher is back